On 4 July, 1976, Lt Col Yonatan “Yoni” Netanyahu, commander of the elite Sayeret Matkal commando unit, became the only Israeli military fatality in the daring hostage rescue at Entebbe Airport. The operation, in which Israeli commandos disguised themselves as Uganda dignitaries, was based on speed and stealth, but, for reasons unbeknownst to operation commander Moshe “Muki” Betzer, Netanyahu opened fired at a Ugandan solider, putting the entire operation in jeopardy.[1]

A philosopher-soldier, with multiple decorations, who left a promising course of study at Harvard to return to the Israeli Defence Forces, the 30-year-old Netanyahu was the archetype of how the Israel saw itself in the 1970s. He died a martyr, and his funeral launched the political career of his fellow Sayeret Matkal commando and younger brother: Benyamin “Bibi” Netanyahu. That career is now on the verge of coming to a cataclysmic end, a possibility that risks fuelling the current conflict with Hamas. Yoni died as a martyr of the Jewish state, but Bibi’s denouement is intimately entangled with his alleged betrayal of it.

Before looking at Netanyahu’s situation in more detail, let’s quickly review how we got here:

Netanyahu’s story is more multi-layered and complex. He is fighting for survival and his own liberty, not just for political power. Most of the coverage of Netanyahu’s problems has focused on the three corruption cases currently being brought against him, Cases 1000, 2000 and 4000. I wish that all countries I write about would follow Israel’s lead in clearly documenting and numbering their politicians’ failings.

Reading through these cases, they all come across as pretty vanilla cases of corruption, probably much less serious than what is overlooked in many other countries. Netanyahu is alleged to have received champagne, cigars and other goods (£160,000 worth of them altogether) from some businessmen, and he is alleged to have traded political favours for favourable media coverage. If anything, it makes Israel look good on the international stage that it is willing to indict its prime minister and take these relatively trivial offences so seriously.

Case 3000: The ThyssenKrupp affair and an alleged betrayal of the Jewish State

But attention should be focused on Case 3000, in which charges have not yet been brought. Indeed, many people are expecting prosecutors and the Israeli deep state to pounce with Case 3000 when Netanyahu is out of office and vulnerable.

The third and fourth deals are more complex. In 2013, Israel initiated an international tender, won by a South Korean shipyard, for four 1,200-ton Corvettes to provide security for Israel’s burgeoning offshore natural gas industry. ThyssenKrupp did not participate, as it does not produce a 1,200-ton Corvette. However, Israel abruptly cancelled the tender, leaving the South Korean yard in the lurch, and then awarded ThyssenKrupp a contract for four 2,000-ton Corvettes: the third deal. The South Koreans were told that the contract had changed because the decision was transferred from the Ministry of Defence to the National Security Council. As the former head of the Ministry of Defence’s Production and Procurement Directorate explained to a television interviewer, “The ship offered by the Germans is not at all like what the Navy asked for. The changes smelled fishy.” Netanyahu’s National Security Council dismissed that allegation, arguing that the international tender was bait to squeeze a €175mn subsidy out of the German government.

The fourth deal is the most damaging to Netanyahu, and it does not even involve Israel. Although there is no legal obligation to do, the German government, for obvious historical reasons, clears all sales of advanced weaponry into the Middle East with Israel, including ThyssenKrupp’s Dolphin-class submarines (like those that Israel had purchased). In 2015, ThyssenKrupp announced that it had sold two Dolphin-class submarines, similar to those that it had sold Israel, and two anti-submarine warships, which could presumably be used to hunt Israel’s submarines, to Egypt. When questioned by Israeli defence officials, and Israeli President Reuven Rivlin, as to why the deal had gone ahead without consulting Israel, German Chancellor Merkel explained that it had been approved by Jerusalem. A former top Israeli defence official confirmed to Israeli police that Netanyahu had approved the sale without consulting the Ministry of Defence. If these allegations are true, not only has Netanyahu used his record time in office to enrich himself, he has also betrayed the Jewish state for German largesse.

The coming day of reckoning

Netanyahu is now in his end game. His Likud Party has failed to form a government, and President Rivlin has given Yair Lapid, leader of the centrist Yesh Atid party, a chance to do so. He has until the first week of June. If he fails, as seems likely, Israel will move to its fifth election in two years. Having failed four times to win a stable majority, it seems unlikely that Netanyahu will succeed a fifth time. Although I don’t have polling data to confirm it, my gut feeling is that Israel’s success in vaccination will boost liberal turnout, further weakening Netanyahu.

Thus, the conflict with Hamas may offer Netanyahu his best chance at remaining in power, and out of prison, by rallying Israel around the Palestinian threat and undermining Yair Lapid’s ability to form a government. Indeed, Lapid’s first round of talks collapsed after a week, with Naftali Bennet, leader of the nationalist Yamina party, abandoning talks, and Arab parties, which hold 10 seats, hesitant to engage in coalition talks while fighting continues. As a decorated Israeli veteran once put it to me: I fought to defend my homeland, but I don’t want my children fighting Netanyahu’s wars.

No impact on tech, but risks for natural gas

In terms of market implications, the conflict does not affect Israeli tech directly, which will continue to behave as an extension of Silicon Valley. While some commentators may point to the contrast between the US’s muted reaction to Israel’s actions and its proactive stance towards human rights abuses in China, and indeed the contrast is notable, the remarkable thing about Israel’s tech industry is how separated it really is from the West Bank and Gaza. The military provides a fertile training ground for Israeli technology talent, but the tech companies themselves huddle on the Mediterranean, with no direct, and indeed little indirect, exposure to what is happening on the Palestinian territories.

However, it does potentially affect Israel’s future gas production. Netanyahu’s third deal with ThyssenKrupp deprived the Israeli Navy of the specific capability it sought to defend Israel’s offshore gas production. Meanwhile, every new conflict with Hamas shows its improving capability. One could easily imagine that Israel’s offshore pipelines and the onshore terminal at Ashdod could become future targets for Hamas. Indeed, a fuel depot in Ashkelon, which lies between Ashdod and Gaza, was one of the first targets hit in the recent rocket attacks. Not only does this raise questions about Ashdod’s security, but it also calls into question Eilat-Ashkelon’s utility as an alternative for GCC oil shipments through Suez. If I were still Energy Security Advisor to the US European Commander, who has responsibility for Israel, I imagine that this problem would take up a meaningful chunk of my time.

Figure 1: Map of Israel's offshore gas production. Mari B was the first field to come online, followed by Tamar, both of which tie back to the shore through the Ashdod Onshore Terminal, c20km north of the Gaza Strip 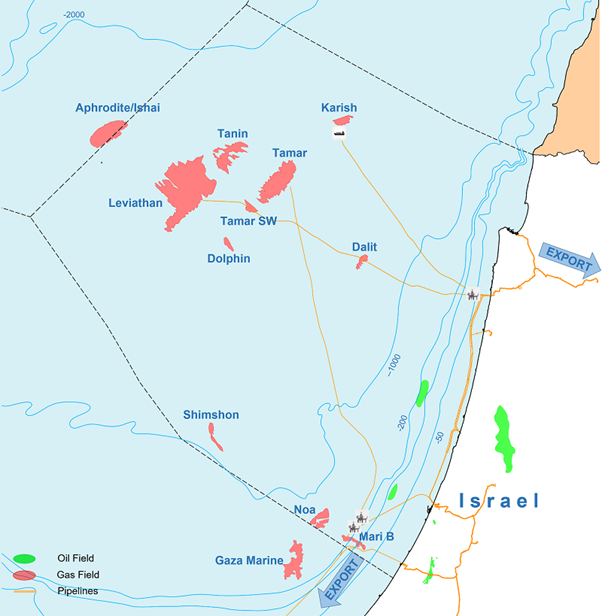 Source: Ministry of Energy of Israel

[1] There has been a long-running conflict between Betzer and the Netanyahu family, who have tried to tarnish Betzer’s reputation and argue that Yonatan was shot by German terrorists, not Ugandan soldiers.