Is this the beginning of the end for the bullish dollar run?

US Treasury and other major bond yields continued to slide yesterday, taking the US 10yr to within a whisker of breaking below the 4.000% level. Yesterday's moves were a continuation of the previous session, but a smaller-than-expected rate hike from the Bank of Canada added further pressure to yields as it spurred speculation that other major central banks could soon follow suit. In another sign that bonds are starting to look attractive once again, the 5yr UST auction yesterday was met with strong demand and the auction stopped through by 1.8bp. The 5yr is seen as one of the most rate-sensitive bonds, so strong demand here suggests that the market is becoming more comfortable with pricing in an end to the rate hiking cycle.

Across the pond, bunds seemed to underperform their peers from the US and UK yesterday. This was likely due to a bit more caution in the market ahead of today's ECB meeting. Even after yesterday's pivot by the BoC, we still see a 75bp hike coming today, which could drive a rebound for yields into the weekend.

South Africa: A combination of a retreat in US Treasury yields and a better-than-expected budget has helped domestic bond yields drop sharply. The dip in domestic bond yields comes as SARS made inroads into recovering and collecting much more than expected, and the windfall eased some of the pressure on the fiscus. The projected budget deficits and the country’s debt profiles improved to ensure that fiscal consolidation remained a priority. Whether this fiscal constraint can be sustained is questionable, but the market has received a positive surprise for now. Add to that the efforts announced to tackle corruption and contain public sector wage increases, in addition to reforms, reduced the pressure on the ZAR to sell off. SA’s risk profile, coupled with the weakness in the USD, assisted the ZAR in recovering to 17.94, and even more is possible.

Kenya: Kenyan lawmakers have approved all 24 cabinet nominees put forward by President William Ruto. The National Assembly approved the nominations in a vote held on Wednesday, and the new ministers may be sworn in this week. Former central bank governor Njuguna Ndung’u is set to be National Treasury secretary, while Musalia Mudavadi, who served as finance chief in the 1990s and briefly as vice president in 2002, is set to become the country’s prime cabinet secretary. The new administration faces significant challenges, including reigning in a ballooning debt burden, countering the increasing cost of living and a chronic drought that has caused agriculture, the country’s economic mainstay, to contract for the third straight quarter in the three months through June and hobbled tea and horticulture production.

Nigeria: In a bid to mop up excess cash and rein in inflation, the Central Bank of Nigeria will replace high-value currency notes starting December 15. According to the CBN Governor Godwin Emefiele, the bank plans to issue redesigned 200, 500, and 1000 naira notes, with the old notes ceasing to be legal tender starting January 31. Emefiele added that 85% of the cash in the country is held outside commercial banks, which is undermining the efficacy of monetary policy and the integrity of the country’s currency. The amount of cash in circulation has doubled since 2015 to NGN 3.23trn ($7.3bn) as of September. The move to switch notes may be complicated given a significant population of Nigeria resides in rural areas away from bank branches.

Namibia: The Namibian government has indicated that it would consider joining the Organization of Petroleum Exporting Countries if recent oil discoveries by TotalEnergies SE and Shell Plc turn out to be significant. The international companies each found oil offshore in February and plan to start appraisal programs to determine their size over the next couple of months. While the explorers have cautioned against speculation about the scale of the resources, TotalEnergies Chief Executive Officer in September said that its discovery could be a giant.

Middle Eastern and North African countries: In a bid to boost regional economies, Saudi Arabia’s sovereign wealth fund plans to invest $24bn in Middle Eastern and North African countries. According to a statement, the Public Investment Fund plans to set up companies to invest in Bahrain, Oman, Jordan, Iraq, and Sudan. It will channel funds into several sectors, including infrastructure, health care, real estate, and telecommunications. In August, the PIF started the Saudi Egyptian Investment Co. to invest in Egypt.

Gabon: To fund the construction of hydro-power plants, Gabon is considering selling a green bond. According to the head of Gabon’s sovereign wealth fund, while the bond will be between $100mn and $200mn in size, the fund will first focus on finalizing selling 90mn carbon credits based on emissions absorbed by its trees. Note that green-bond sales from governments have slowed in 2022 after exponential growth in recent years, as the need for borrowing cools from the spike seen during the coronavirus pandemic. Moreover, investors have turned more cautious, given the volatility following Russia’s invasion of Ukraine.

Ivory Coast: Ivory Coast has started construction on its first biomass fire generation plant, a 46 megawatt (MW) project. According to BIOVEA Energie, the plant will cost EUR200mn ($199mn) and is expected to be operational in three years. The plant includes two 23 MW turbines that will run on around 520,000 tonnes of palm oil waste bought from farmers in Ayebo and could boost revenues of nearly 12k farmers by around 20% annually. Ivory Coast is facing growing energy demand, and this project is seen as alleviating some of that pressure. Ivory Coast’s power capacity is about 2,369 MW, mainly from oil and gas, and the country hopes to increase that to 4,000 MW by 2025.

The USD remained on the back foot yesterday, extending losses to a second session as speculation that the Federal Reserve would slow the pace of interest rate hikes in the months ahead boosted appetite for riskier assets while diminishing the US currency’s appeal. Weaker-than-expected data on Tuesday showed signs that cracks might be emerging in the US economy, underpinning expectations of a less aggressive Federal Reserve. 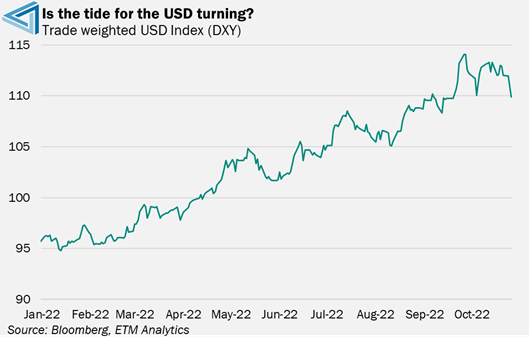 It is worth highlighting that the USD is extremely overvalued at current levels and may be due for a correction. With so much priced into the USD, risks are asymmetrically building against it, and should the Federal Reserve potentially soften its stance, the USD could weaken further. A reversal in the USD would provide support for emerging and frontier market currencies that have broadly weakened this year. However, currencies in countries without sound fundamentals may be unable to capitalize on the unwinding of the USD strength fully. This morning, the USD has stabilized.

Fixed Income: African sovereigns are the most at risk of default

While there have been signs of fiscal consolidation in Africa as governments look to pull back on spending while rolling out measures to boost revenues, fiscal risks across the continent are acute. African countries are under pressure from rising debt, slowing growth and soaring interest rates, which are compounding debt servicing costs. In some instances, the sharp rise in global interest rates has priced countries out of the international debt market, where many African countries have been rolling over their debt and funding their budget shortfalls.

In-house fiscal models show that fiscal risks across the continent have risen sharply since the start of the pandemic, with a handful of countries slipping into positions of fiscal distress. In addition to our internal models, we closely monitor Bloomberg’s Sovereign Default Vulnerability Scorecard. The model, which considers factors including dollar bond yields, interest expenses, and gross debt, shows that African countries rank the highest in default vulnerability. Specifically, Ghana takes the top spot in terms of debt vulnerability, followed by Egypt in third, Mozambique in fourth and Kenya in seventh. 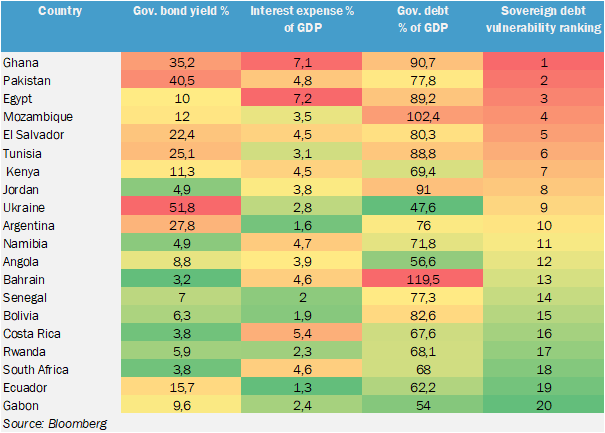 Bloomberg also has a Default Probability Model, which considers factors such as GDP growth, debt, FX, and yields on debt. 11 emerging market countries stand out, with the top African countries being Ghana and Kenya. One of the key factors that we are monitoring closely is external debt payments due in the next 18 months. This shows that Kenya doesn’t have any significant payments due until 2024, which will come as a relief for fiscal hawks. In conclusion, while fiscal risks across the continent have risen markedly over the past two and a half years, there are only a handful of African countries at risk of default in the near term. Moreover, the international lending community is coming to the party and providing bold relief measures to prevent mass defaults amongst fiscally distressed countries.

Yesterday, the Bank of Namibia’s Monetary Policy Committee raised its benchmark Repo rate by 75bps to 6.25%. The MPC said in its statement accompanying the rate decision that the decision was taken with due consideration of the persistent inflationary pressures and is deemed appropriate to safeguard the one-to-one link between the Namibian dollar and the South African rand, while meeting the country’s international financial obligations. 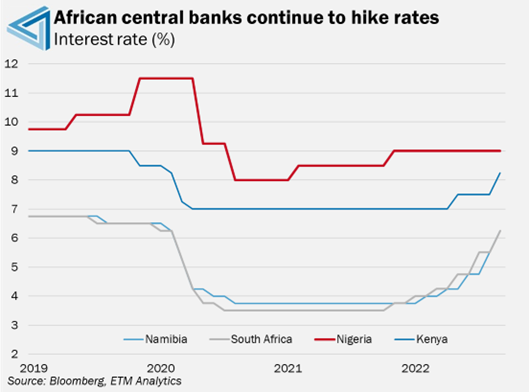 The MPC added that the bold rate hike was necessary to narrow Namibia’s negative real interest rate and is consistent with that taken around the globe and in the region. African central banks will want to maintain their monetary policy differentials with major economies such as the US to ensure that their currencies don’t come under additional selling pressure, which would amplify inflation pressures.

Looking ahead, we have two key policy decisions in the next few days, starting with the ECB rate decision later today. The ECB will again need to weigh the economic impact of its monetary tightening cycle against persistent inflationary pressures. The balance of risks is tilted in favour of another outsized rate hike. Specifically, the ECB is expected to implement a second consecutive 75bp rate increase and potentially also unveil the reintroduction of a tiering system and new terms for the targeted longer-term refinancing operations. It may also discuss quantitative tightening, although it is unlikely to begin with this until after interest rate normalization has been completed. Next week, the Fed meeting will also be watched closely and provide markets much anticipated forward guidance.