Is the tide turning for bond markets?

US earnings dealt market sentiment a blow. Alphabet missed its earnings expectations outright as YouTube revenues fell. Microsoft may have beaten expectations, but its forward guidance was weak. Add to that the deceleration in US house prices and the drop in consumer confidence and investors sat up and paid attention. Comments by the US banking Committee that the Fed should continue tackling inflation, but should also remember its mandate of full employment, was yet another sign that the Fed is coming under pressure to rethink its aggressive tightening strategy.

This adds to the pressure many other central banks around the world are under as they try to protect their currencies against the USD and slowly, the Fed may need to consider slowing the pace of tightening or conside3r pausing. Indicators are showing that the risk of a US recession is growing. The combination of all the above resulted in the USD correcting lower as investors positioned for a Fed that would pivot and turn less hawkish. With so much priced in and with the USD so expensive, it follows that it came under pressure yesterday, especially as US bond yields reversed lower. The EUR-USD has climbed back up towards parity, while the GBP-USD surged back up to 1.1450. The JPY remained more or less unchanged just above 148.0/dlr.

In the commodities market, oil prices are back under a bit of pressure this morning, with the market still digesting yesterday’s API report, which showed that US crude stockpiles increased by a massive 4.5mn barrels last week. This puts focus on the official government figures, which will be out today, with the breakdown of distillates and other fuel supply inventory levels likely to move the markets this afternoon. Supply remains tight across the globe, but the pressures are less acute in the US, while signs are emerging that demand across the globe is softening.

South Africa: Today, the focus turns squarely to the local MTBPS and the guidance that will come from Finance Minister Godongwana. There are many fiscal hurdles to overcome, and whether he can strike a balance between fiscal orthodoxy, conservatism and consolidation yet still supporting the economy will determine how the ZAR ends the week. It is a tough ask of the National Treasury and the Finance Minister but of paramount importance if SA still wants to attract foreign investment and remain relevant in the global investment community. The USD-ZAR has consolidated around 18.20 today and will likely remain around that level ahead of the MTBPS.

Ghana: Ghana’s president has been asked by a majority of the ruling party’s parliamentarians to dismiss Finance Minister Ken Ofori-Atta and his deputy in order to “restore hope in the financial sector.” A representative speaking on behalf of 80 of the 137 NPP members said that members of parliament would not take part in any business of government and would boycott budget hearings until its demands are met. Parliament is set to begin debating the 2023 budget in the coming days. President Nana Akufo Addo already faces a hung parliament, with membership split down the middle between two major parties. Even single abstentions often hold back ruling party proposals from becoming legislation. The potential removal of the finance minister and slow progress on negotiating a deal with the IMF could generate some volatility in the Ghanaian financial markets.

Nigeria: To help achieve food security, Nigeria has partnered with the African Development Bank and other lenders to introduce new agro-processing industrial zones. Of the $520mn funding for the program known as Special Agro-industrial Processing Zones, the AfDB will provide $210mn, the Islamic Development Bank and the International Fund for Agricultural Development will jointly provide $310mn, while the Nigerian government will contribute $18.1mn, according to a statement from the African lender. President Buhari expects the program to “create millions of good paying agro-industrial job opportunities and radically improve export earnings from agriculture” in the next decade.

Namibia: In Namibia’s mid-year budget review, the government forecasted the economy to grow 2.8% this year and 3.4% in 2023, slightly lower than earlier forecasts of 2.9% and 3.7%. The downward growth revisions reflect updated data from industrial surveys, especially on output from the mining sector and year-to-date performance. Meanwhile, the budget deficit is projected to be around 5.3% of GDP in the 2022/23 financial year compared to 5.6% estimated in the main budget in February. Referring to next year’s plans, the minister said that “the FY2023/24 fiscal strategy will centre on maintaining prudent expenditure management and promoting economic recovery. Accordingly, the government will focus on entrenching fiscal sustainability and stabilizing the pace of debt accumulation.”

Zimbabwe: Consumer price inflation in Zimbabwe slowed to 268.8% y/y in October from 280.4% y/y in the month prior. On a month-on-month basis, consumer prices rose 3.2% versus 3.5% in September. While inflation slowed in October, it nevertheless remains high and suggests that the central bank is unlikely to alter its benchmark interest rate of 200%, the highest in the world, in the near term.

Ethiopia: The South African government yesterday said that the first formal peace talks aimed at ending the war in the northern Ethiopian region of Tigray had begun and are expected to end on Sunday. The talks, mediated by the African Union, come when the government has been making significant gains on the battlefield, capturing several large towns in Tigray over the past week. A truce between the Ethiopian army and forces from the Northern Tigray region would further underpin efforts by Ethiopia’s government to improve relations with international lenders as it awaits an International Monetary Fund loan amid efforts to restructure its debt.

Forex: eNaira uptake subdued as citizens look to other cryptocurrencies

The Central Bank of Nigeria (CBN) is turning to the county’s three-wheeler taxi operators to speed the adoption of the eNaira, one year after launching Africa’s first digital currency. The CBN is reportedly offering a 5% discount to drivers and passengers of the motorized rickshaws who use the eNaira, in an attempt to kickstart the digital currency, which has so far attracted just one in 200 people in the country. 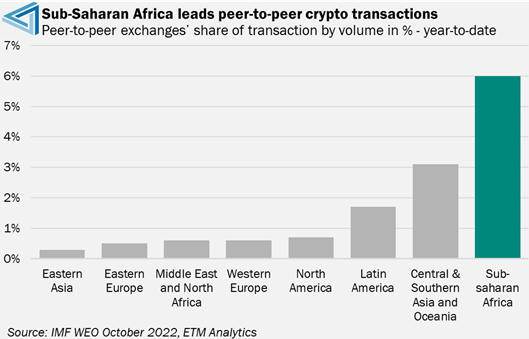 While eNaira uses distributed ledger technology similar to Bitcoin or Ethereum and can be saved in digital wallets, it appears that Nigeria’s appetite for cryptocurrencies does not extend to the CBN offering. Factors such as a lack of knowledge and scepticism have led to lower adoption of the official digital currency, with citizens instead opting to use other cryptocurrencies, which they see as a hedge against inflation and currency depreciation.

While the CBN has restricted banks and other institutions from facilitating the use of cryptocurrencies, it has only pushed more players to the peer-to-peer market, as seen in several countries across the continent. Peer-to-peer (P2P) refers to the direct exchange of an asset, such as a digital currency, between individual parties without the involvement of a central authority. This has also contributed to a lower uptake of central bank digital currencies in Nigeria and several countries across the continent. Going forward, what Nigeria does to improve the uptake will be greatly scrutinized by central banks considering their own digital currency, as Nigeria was the first African country to fully launch a digital currency.

Fixed Income: Is the tide turning for bonds?

While the broader bearish bias in bonds remains entrenched, with bond yields across the world significantly higher since the start of the year, bonds had an exceptional day yesterday amid signs that Federal Reserve rate hikes are beginning to take a toll on the economy. Core market bond yields were broadly lower yesterday, dragging emerging and frontier market bond yields down with them.

While the US house price data is traditionally not market-moving, traders took the weaker-than-expected data as a sign that cracks are emerging in the US economy. For context, US house prices tumbled the most since 2009. US consumer confidence data also came in below expectations, adding to the notion that the US economy is slowing and that the Fed may have to turn less aggressive in its tightening. 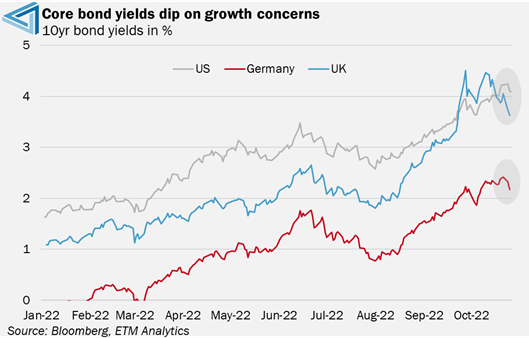 While the weaker-than-expected US data dampened US rate hike bets yesterday, the FOMC is still expected to deliver a 75bps rate hike next week. Arguably of more importance than the rate hike itself will be the bank’s forward guidance on rates. Investors will be on high alert for signs of slowing economic growth that could allow the Fed to moderate the pace at which it has been raising interest rates.

As mentioned in yesterday’s note, the next few months will present an excellent buying opportunity for fixed-income investors, given the deep valuations on offer and expectations for a shift in global monetary policy as growth concerns become a reality. That said, investors will have to have their timing spot on. Therefore, investors should keep a close eye on upcoming data out of the US and comments from major central banks. We are of the opinion that there will be a shift in central bank rhetoric within the next 3 months, which should spark a reversal in bonds.

Extreme weather conditions, whether in the form of floods or drought, are wreaking havoc across the continent. Several African countries, including Nigeria, are experiencing abnormal levels of rain, while others, including Kenya, are experiencing an extreme drought, both of which are risk food production. This comes against the backdrop of tight global food supplies, the combination of which is a major concern for Africa. 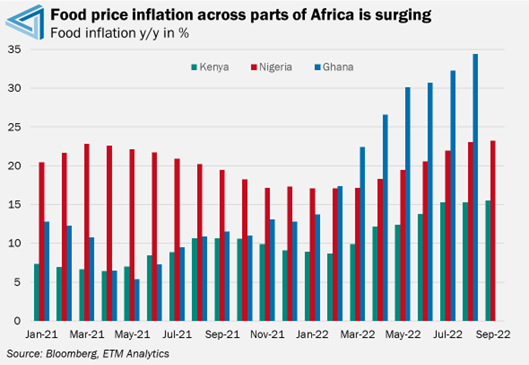 Widespread famine seems increasingly likely in East Africa as drought conditions persist for a fourth straight year. Many regions in northern Kenya have been experiencing the worst drought in years, resulting in dwindling harvests and growing hunger. According to the Minister for Agriculture Ahmed Madobe Nunow, the drought in Somalia is affecting an estimated 7mn people who are in dire need of assistance. Ethiopia is also facing acute food shortages due to persistent drought conditions.

Food supplies in West Africa are also under pressure. Reports show that one-third of Nigeria is underwater due to heavy rains. An estimated 110,000 hectares of farmland have been destroyed since the floods began in August. Moreover, the floods have destroyed around 60-75% of Nigeria's harvest, amplifying the food crisis in Nigeria. The extreme weather conditions across parts of the continent are driving up food prices and underpinning food price inflation. This suggests that policymakers in these countries will have to remain hawkish in the months ahead.