Iran Nuclear Deal might be now or never, but Israel friction will last

The second round of Iran Nuclear Deal negotiations since hardliner Ebrahim Raisi's election are ongoing, but expectations of progress are low.

US credibility on sticking to sanctions relief has evaporated, with no clear way of restoring it given the state of bipartisan politics in the US and the need for Congressional support for a credibly permanent commitment.

And Iran's Revolutionary Guard Corps elite has both survived for so long domestically without sanctions relief and progressed its nuclear enrichment beyond the restrictions of the Nuclear Deal that it may not see the point in making the sort of compromise beyond those original restrictions that get a deal done quickly.

A restoration of sanctions relief for Iran's oil exports, at least, could see an additional 2.5mbpd in short order, the same level exported in April 2018 just before former US President Trump unilaterally reneged on the Nuclear Deal. This figure compares to 2.7mbpd of OPEC+ output restraint that is scheduled to remain in place by the end of 2021. 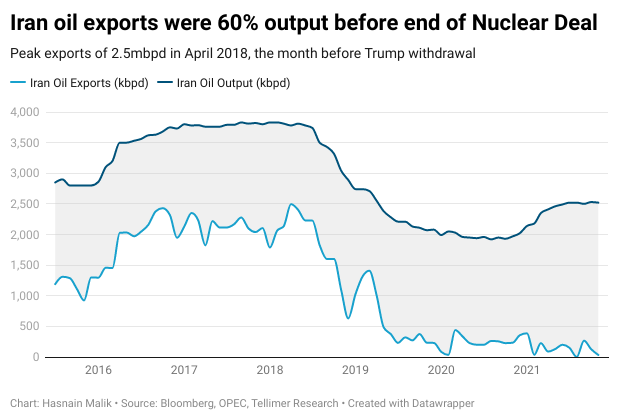 No deal will mean that Iran's autarky – or at least its economic separation from "Western" markets – will endure. While the Iranian political elite will continue to use its authoritarian tools to suppress political discontent resulting from continuing economic stress, this presumably becomes harder with every year. The unofficial Iran Rial exchange rate is less than 15% of the official rate, having devalued 22% year to date and about 80% since the US withdrawal. 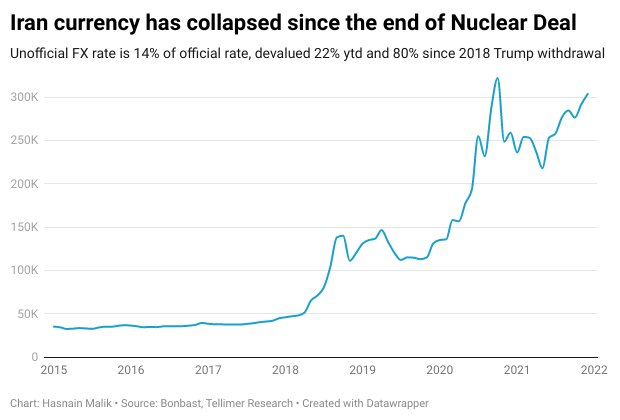 Deal or no deal, friction between Israel and Iran is likely to persist. But Israel's actions are likely to remain in the realm of covert operations, ie sabotage and assassinations in Iran as well as on Iran-linked targets in Iraq and Syria, rather than a direct military strike. The geopolitical world has changed since prior to the 2015 Nuclear Deal and the US under President Biden, the GCC (despite their recent detente with Iran), Russia, China and the EU are unlikely to support direct military actions which risk sparking off a major conflict. 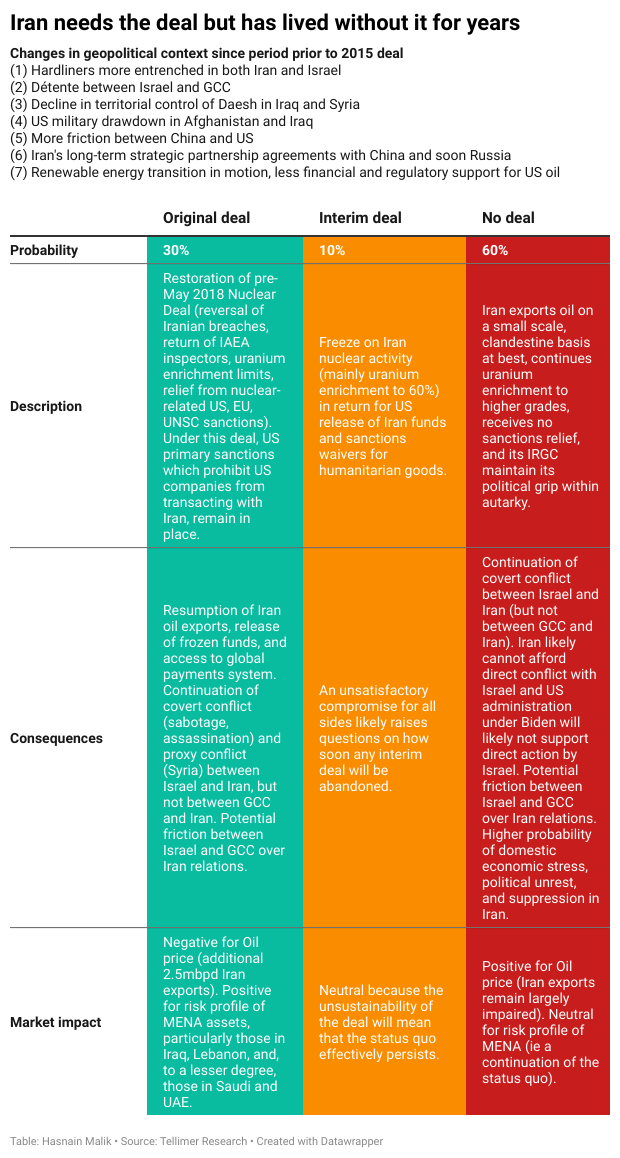 Context for the latest negotiations

In December 2020, Iran passed a law that authorises (rather than commands) the expansion of its nuclear enrichment programme and the blocking of UN IAEA inspectors should there be no relief within two months on US sanctions that inhibit European purchases of Iranian oil. In the new law, the provisions on enlargement of the nuclear programme include the following:

The Iran Nuclear Deal ostensibly centres around the bargain struck between the US and Iran, but a range of other countries have interests at stake.

US (rock) and Iran (hard place)

The US, under the Biden administration, took power with the view that the old Nuclear Deal is the best guarantee of curtailing Iran's development of nuclear weapons. Iran wants sanctions relief above all, but has endured enough economic pain without any loss of political power for the Revolutionary Guard elite to wait it out. The paradox is that Iran wants what no US president can credibly offer, unless there is a major shift in US congressional and electoral politics: permanent sanctions relief.

Israel and the GCC: closer but not identical

Regional allies of the US – principally Israel but also most of the GCC – are keen to remind the US that they need more guarantees built into any new deal over Iran's non-nuclear threat. This is not to say that the GCC would support an escalation of conflict between Israel and Iran beyond the current level of covert sabotage. Since the original Nuclear Deal, a public détente has taken place between Israel and parts of the GCC, starting with the August 2020 Abraham Accords. More recently though, dialogue has restarted between both Saudi and Iran (mainly over overlapping interests in Iraq), and the UAE and Iran (as part of a broader de-escalation of regional tensions after a period of more forthright foreign policy by the UAE).

China, Russia, India and Turkey all have a vested interest too

Separately, the position of the powers such as China, Russia, India, Russia and Turkey see strategic opportunities to exert greater influence in the region (which extends as far as the central Asian republics and Afghanistan) as the US, at the margin, allocates more of its resources to Asia.

Exploiting these opportunities requires building shared interests with Iran. Since the original Nuclear Deal: India signed an investment deal around the development of the Chabahar port in 2016 and took possession of its terminal in 2018, China signed a 25-year strategic and commercial agreement with Iran in 2021, and Russia is reportedly close to signing a similar long-term agreement to China.

Iran and the Nuclear Deal

Iran: Elections will not reshape policy or regional risk (Feb 2020)

EM Wars: The changing art and risk of war in Emerging and Frontier markets (Mar 2020)

UAE-Israel: Geopolitical and economic aspects of the deal (Sep 2020)

Iran: Why Iraq is so at risk, and other frequently asked questions by investors (Jan 2020)

A new civil war in Lebanon: time to consider the consequences (Apr 2021)

Qatar and Saudi start to mend ties, not clear UAE will join in GCC patch-up (Jan 2021)