The reset or renegotiation of the Iran Nuclear deal will be a protracted process which will be punctuated by more overt aggression, directly and via proxies, from Israel and Iran, conflicting priorities of regional and global powers impacted by the deal, and interrupted by domestic political change (potentially to the Israeli PM and certainly to the Iranian President). It may require a moment of crisis to act as a catalyst for a new settlement. There are a few more rocky months ahead but no one can afford a war.

Israel's cyberattack against the Natanz nuclear facility in Iran, maritime attack against the Saviz vessel in the Red Sea, and airstrikes against Iranian-linked assets in Syria all point to a more intense phase of conflict with Iran that coincides with the re-opening of negotiations between the US and Iran over a new Nuclear Deal.

On the other side, Iran has expanded its nuclear enrichment programme, engaged in its own Red Sea vessel attacks, and continued attacks from its regional allies (particularly Houthi strikes into Saudi). Each side has also sought to demonstrate its international alliances with public shows of support, eg the "ironclad" commitment for Israel voiced by US Defence Secretary Austin and the 25-year Cooperation Program signed between Iran and China. Ironically, each side is also in the midst of domestic political uncertainty: Israel PM Netanyahu is battling both rivals for his leadership and charges for corruption, while Iran is scheduled to elect a new President on 18th June (from a list of candidates first vetted by its Guardian Council).

The Iran Nuclear Deal ostensibly centres around the bargain struck between the US and Iran. The US, under the Biden administration, sees the old Nuclear Deal as the best guarantee of curtailing Iran's development of nuclear weapons. Iran wants sanctions relief above all, but has endured enough economic pain without any loss of political power for the Revolutionary Guard elite to wait it out. But regional allies of the US – principally Israel but also most of the GCC – are keen to remind the US that they need more guarantees built into any new deal over Iran's non-nuclear threat. And powers such as China, EU, India, Russia and Turkey see strategic opportunities to exert greater influence in the region as the US, at the margin, allocates more of its resources to Asia. 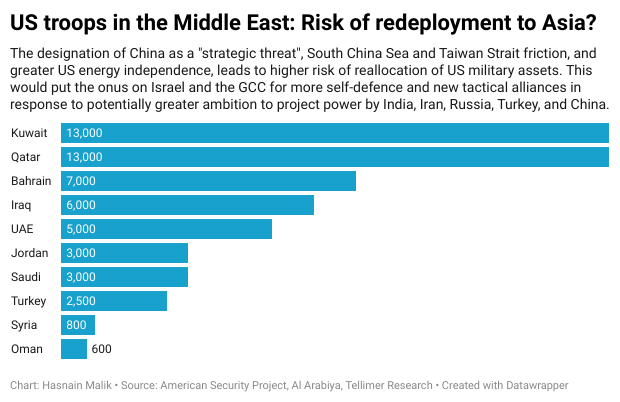 EM Wars: The changing art and risk of war in Emerging and Frontier markets (Mar 2020)

Iran: Elections will not reshape policy or regional risk (Feb 2020)

Iran: Why Iraq is so at risk, and other frequently asked questions by investors (Jan 2020)