Responding to slightly more hawkish comments by the ECB, the EUR has found some support and remained well-supported above parity. Furthermore, the USD is trading heavy ahead of US CPI, which appears to be turning the corner in response to the sharp reduction in stimulus and the resumption of quantitative tightening. As the credit cycle in the US tightens, and the pressure on the economy builds, US inflation will start to moderate in a way that will ease the pressure on the Fed to act as aggressively. Although a 75bp rate hike is expected next week, this is fully priced in. Any surprise softer than expected inflation reading might see investors speculate on a higher probability of a 50bp hike. Given the aggressive tightening factored into the USD already, the asymmetrical risk is of the USD correcting lower. US CPI and retail sales will be the pick of the data this week that holds market-moving potential. The EUR has made back more ground trading at 1.0080 this morning, while the GBP is trading back above 1.1600.

It has been a mixed start to the week for fixed incomes markets. US Treasury futures have edged high in early Asia trading, while European bond yields are for the most part trading lower. Monetary policy remains the key driver behind movements in core bonds following the hawkish comments from Fed speaker last week. The market focus at the start of the week will be centred on the US CPI report scheduled for release tomorrow. A topside surprise in the CPI print will bolster bets for the Fed to deliver another outsized rate hike this month. Recall that more Fed speakers backed a larger rate hike this month and elevated terminal rate. US short-term rates could be pressured high if US CPI surprises and the Fed remains ultra hawkish in its communication.

Angola: Angola’s Constitutional Court rejected a second challenge from the runner-up in the August presidential elections, paving the way for Joao Lourenco to be sworn in for a second term as president later this month. Opposition party National Union for the Total Liberation of Angola had requested a vote recount, but the Constitutional Court declared the election results announced by the national electoral commission as valid and said that “As per the constitution, the president of the republic, the vice president and members of parliament should take office.” The court’s decision cannot be appealed.

Botswana: Botswana’s Finance Ministry has forecast the country’s budget deficit to widen after the government agreed to a BWP 1.8bn ($139mn) relief plan to help millions of households struggling due to rising inflation. The deficit is estimated to increase to BWP 7.7bn in the fiscal year through March 2023 from a previous estimate of BWP 7bn due to an expected decline in some revenue items and higher expenditure. The ministry projects value-added tax revenues will be lower after the government last month temporarily reduced the VAT rate and zero-rated some commodities for six months, and increased tertiary student allowances. The ministry added that “higher borrowing costs will add to government spending and increase fiscal pressures, at a time when there is an urgent need to replenish the financial buffers.” Botswana last recorded a budget surplus in the fiscal year through 2017 and has since been running down its savings and ramping up domestic borrowings to cover its deficits.

Mozambique: Headline inflation in Mozambique accelerated to 12.10% y/ in August y from 11.77% y/y in the month prior. The August print was the fastest pace of price growth in the economy since August 2017, driven by food and non-alcoholic beverages transport prices. Transport inflation rose to 21.34% y/y from 19.10% y/y in July, while food and non-alcoholic beverages increased to 17.27% y/y from 17.24% y/y. While inflation has risen for the past five months, the August reading could be the high-water mark. Risks of a slower pace of price growth exist in the coming months amid government measures to subsidize transport and fuel imports.

Nigeria: Nigeria has set up a committee to coordinate economic policies. According to President Buhari, the new panel will identify economic issues requiring urgent intervention, review the impact of existing and new policies, provide directions to relevant institutions responsible for fiscal, monetary, and other matters. The president added that it will also serve as an “emergency room.” The committee will be headed by Buhari, while some members include the central bank governor and the minister of finance.

Zambia: Speaking on Friday, Bank of Zambia Governor Denny Kalyalya said that ending the tax relief on fuel in Zambia will lead to faster inflation, but the move will be positive for the economy in the long-run. According to Kalyalya, “Indeed, there will be that nudge in inflation,” but over time such mechanisms will have “more lasting beneficial effects.” Zambia plans to plans to reintroduce value-added tax and import duty for diesel and gasoline at the end of September, rolling back relief granted to help households through the Covid-19 slump and the peak in global oil prices. As a result of the subsidies and a firmer local currency, Zambia inflation has been on a downward trend for more than a year and, at 9.8%, was near the lowest level in three years in August, allowing policymakers to keep rates unchanged for the last three meetings.

Zambia: In a speech on Friday, President Hakainde Hichilema urged creditors to support the government in its “last mile” of debt restructuring as his administration prepares to begin negotiations with lenders in earnest this month. Hichilema was quoted as saying, “we are now ready to sink our teeth in the beef so that we can have the conclusion, the restructuring of our debt.” Following the board approval from the IMF, the Zambian government now plans to sign a memorandum of understanding with its official bilateral creditors’ committee by the end of the year. The government will then start negotiating bilateral agreements with the individual creditors within the parameters of the MoU. Simultaneously, the state intends to start talks with commercial creditors this month. The plan is to reach an agreement with the committee representing Eurobond investors by the end of the year.

The current account balance plays a significant role in a currency’s resilience or lack thereof. Given this, it is worth taking a look at the latest current account data out of Kenya. Provisional data released on Friday by the Central Bank of Kenya (CBK) showed that the current account deficit narrowed to 5.1% of GDP in the 12 months to July 2022 from 5.2% of GDP in the 12 months through to July 2021. According to the CBK, the narrower deficit reflected improved receipts from service exports and remittances. 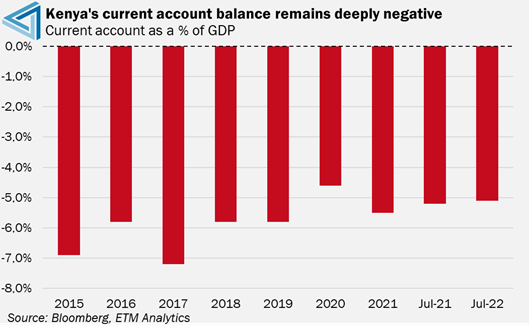 From a currency perspective, a persisting current account deficit has added downside pressure to the Kenyan shilling. The shilling has lost more than 6% since the start of the year against the USD and repeatedly dropped to record lows this year. While dollar flows from non-governmental organizations matching importer demand this week may support the shilling, a persisting current account deficit remains a significant headwind.

Fixed Income: Debt relief provides a boost to the appeal of African Eurobonds

While much of the impetus behind global bond market movements have been driven by monetary policy dynamics in recent months, fiscal and fundamental dynamics are still of extreme importance for fixed-income investors. Following the fiscal degradation driven by the pandemic, investors are demanding significantly higher fiscal premiums for holding emerging and frontier market bonds. African bond yields in particular are trading well above pre-pandemic levels. 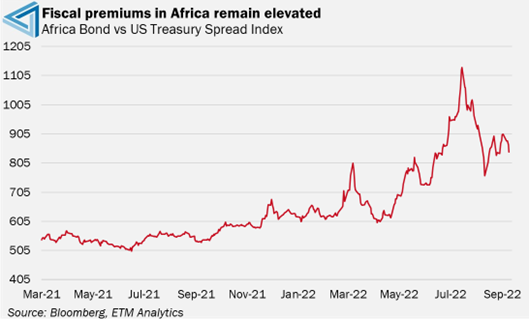 While fiscal premiums in Africa have risen sharply in recent months, a raft of bailouts pledged by the International Monetary Fund and China suggests that we could see a shift in fiscal dynamics across heavily indebted African countries in the months ahead. While some countries are still waiting for the approval of debt reprieve, we are seeing signs of a shift in sentiment toward heavily indebted African countries. The IMF debt relief has dramatically changed the odds for heavily indebted countries, where a wave of debt defaults looked inevitable just a few weeks ago.

While the broader bias in African Eurobonds remains decisively bearish, the shift in rhetoric from international lenders, particularly the IMF and China, is helping investors turn less bearish on African bonds. Although headwinds facing African Eurobonds are acute with major central banks such as the Fed, ECB and BoE expected to remain aggressive in their fight against inflation, investors will find it hard to ignore the attractive yields on offer in Africa, especially as fiscal risks ease amid increased debt forgiveness from Africa’s largest creditors.

Macroeconomic: Global central banks are expected to remain aggressive in the near term

The average global cost of living has risen more in the last 18 months than in the preceding five years combined. Since the start of the pandemic, supply chains have been disrupted, which has been driving up the price of food. On top of that, the war between Russia and Ukraine has seriously disrupted global food supply. While global food prices have moderated in recent months, the risk to the outlook for food inflation remains tilted to the upside as the war between Russia and Ukraine persists and droughts across the globe impact harvests. 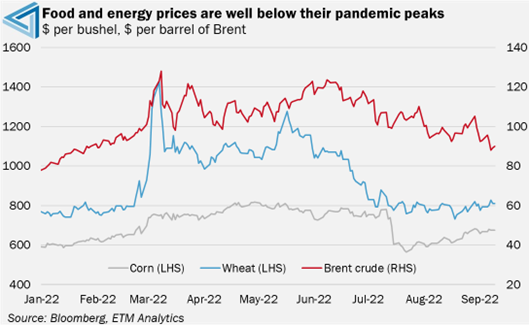 The current energy crisis has also intensified due to many western countries placing sanctions on Russian oil. High energy prices have been driving up the price of transportation both directly and indirectly. Energy prices have however started to ease slightly recently as Russia continues to find a way to get its crude into the market.