Investor focus will turn to recession risk, but impact on EM bonds is ambiguous

Central banks, at least in developed markets and, especially, in the US, remain laser-focused on inflation. But, as we see signs of disinflation and that the anti-inflation medicine is working, attention will surely shift to the outlook for slower growth and the risk of recession next year.

Recession would, in theory, be no surprise, given central bankers need to engineer a period of sub-trend growth to get inflation down, although the market focus on the risk of recession in the early summer of this year was, we thought at the time, premature. Inflation was then, and remains, the policy priority.

However, a shift in focus from inflation to recession could now happen soon in the US, especially if the Fed’s policy rate peaks in the first half of 2023, as the market expects. Even now, with the Bloomberg consensus seeing US GDP growth slowing from 1.8% in 2022 to 0.4% in 2023, and rising again to 1.4% in 2024, few are forecasting a US recession (notwithstanding the technical recession seen in H1). However, market indicators, with an inverted yield curve (10y2y) and recently inverted near-term forwards (18m3m), are flagging a greater risk of recession than survey indicators.

As the IMF noted in the latest WEO, more than one-third of the global economy will contract this year or next, and the three largest economies (the US, the EU and China) will continue to stall. This will feel like a recession for many. The Fund projects global growth to slow from 3.2% in 2022 to 2.7% in 2023, led by developed markets (with growth declining from 2.4% to 1.1%) while EMs remain steady (growth of 3.7% in both years).

Moreover, as the IMF itself warns, over-tightening risks pushing the global economy into an unnecessarily harsh recession, especially if major central banks act in an uncoordinated fashion.

What does a US recession mean for EMs and in particular EM bonds?

As a hypothesis, there might be two competing impacts to consider. One might assume there would be a positive correlation between US growth and emerging market growth, with the US the world’s biggest economy and (traditionally) the main driver of global growth. Historically, there has been a strong relationship between US growth and growth in Latin America, for example. The transmission mechanism would be through trade – US growth (higher import demand) should feed into stronger EM growth (more exports) – and investment (a stronger economy may see US businesses investing overseas); and globalisation may have also increased the correlation between the two. 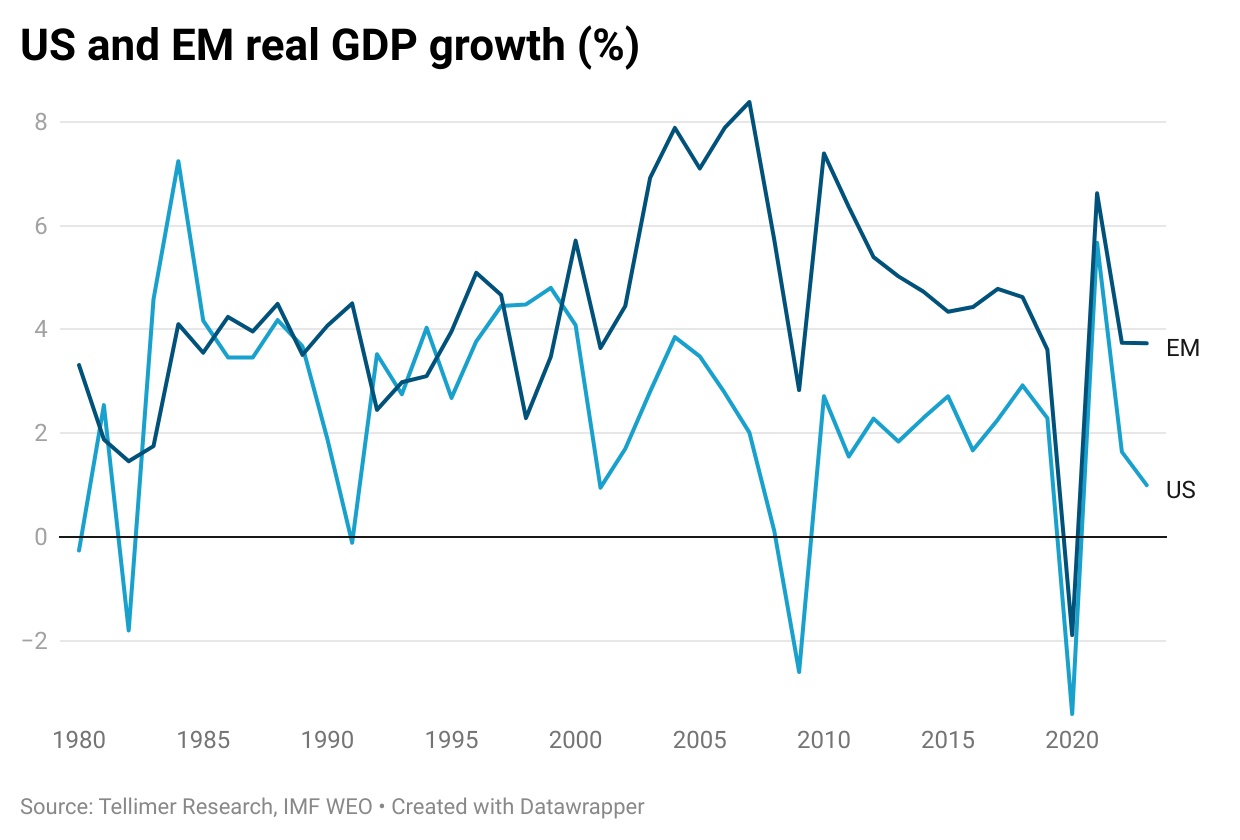 However, the correlation is sensitive to the sample period and may have weakened over time; there may be little discernible relationship now. This may reflect the rise of China, which has become a more important driver of EM, and global, growth. But, on top of this, slower US (and global) growth may lead to rising risk aversion more generally. 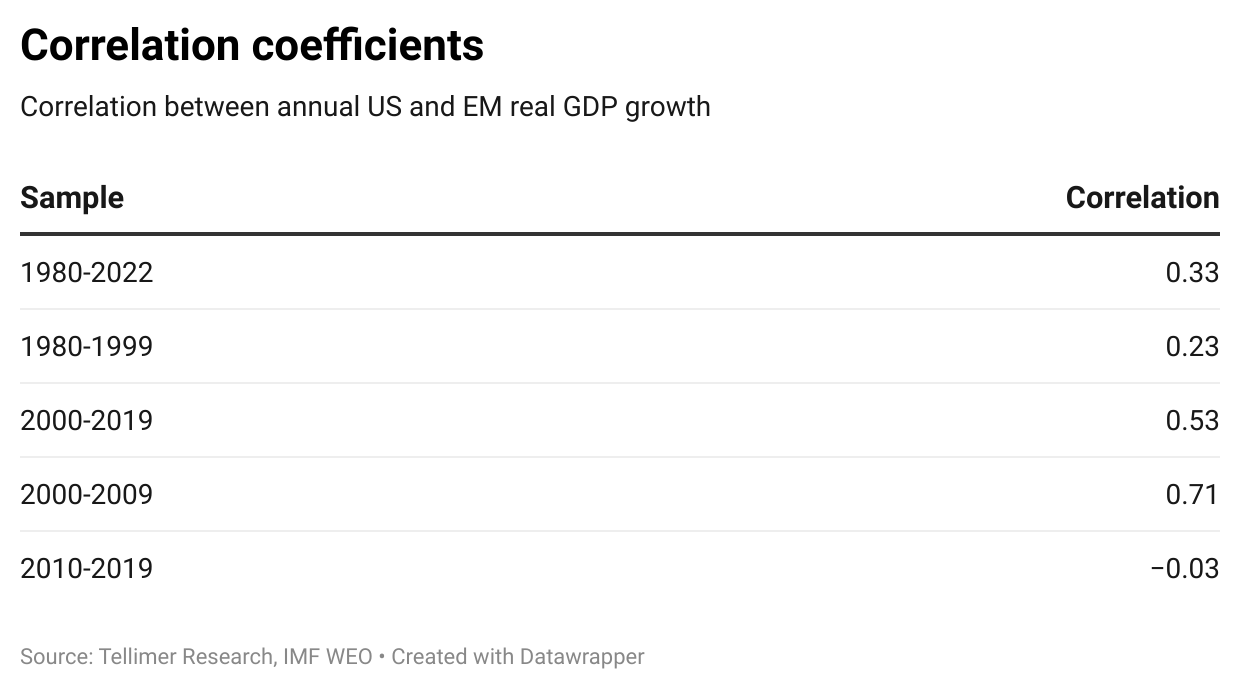 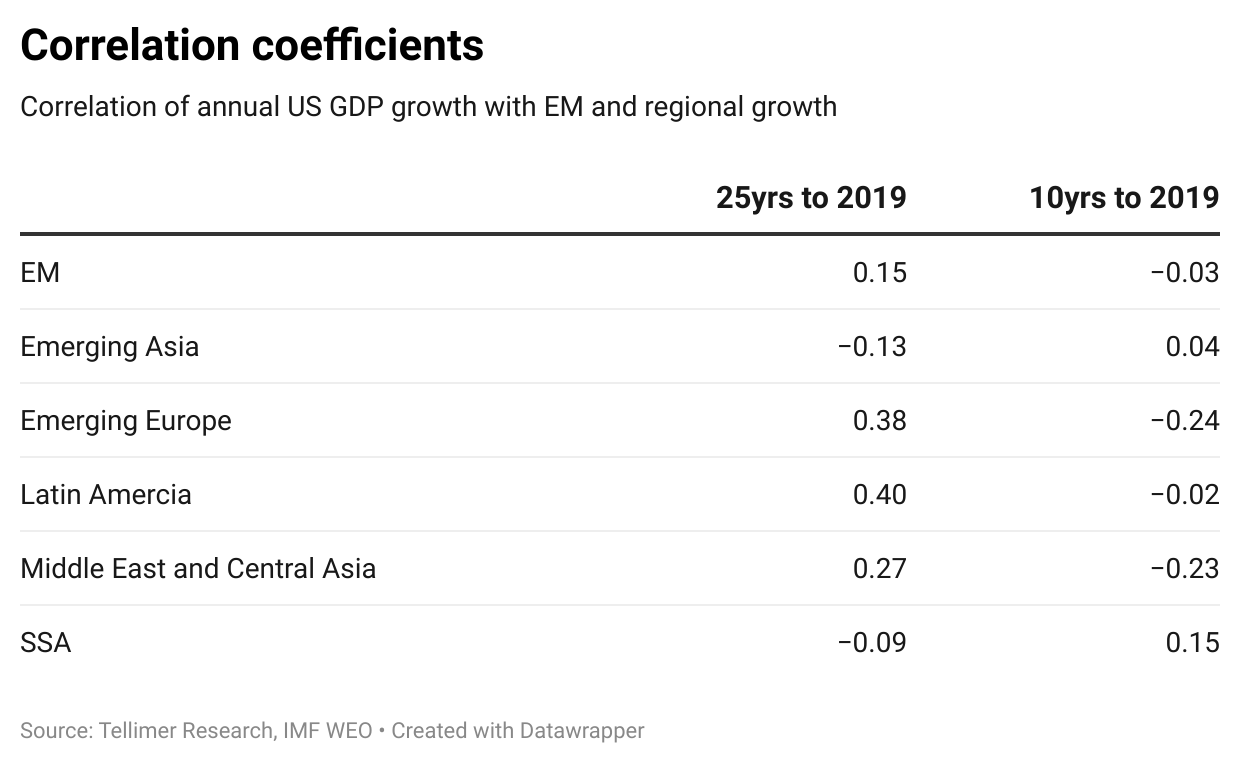 However, on the other hand, an adverse growth impact may be offset by the monetary policy response of lower US interest rates, which would help ease EM financing constraints, and help EM central banks also to lower domestic interest rates, while investors may be encouraged into a search for yield, which could be positive for EM bonds. Hence, it is hard to be certain about the overall impact.

The recent evidence of the impact of US recessions on EM bond returns is in fact somewhat limited, although it points more to a negative than a positive impact. There have been eight recessions in the US since 1970, according to NBER recession dating. But there have been only three since the mid-1990s, since when we have consistent data for EM bond returns, and one of them was the 2020 pandemic, which was somewhat exceptional. That leaves two – the 2001 dot com bust and the 2007-09 global financial crisis – and both were poor for EM bonds.

The 2001 recession came after a short and fairly modest tightening phase over 1999-2000, with the Fed Funds rate increasing by a total of 175bps to 6.5%, in six changes, although the Fed already began easing in January 2001 amid concern over slowing growth, which was amplified by 9/11.

Moreover, this time around, we still think that markets are misplaced to think that the Fed will quickly embark on rate cuts in this cycle, even amid signs of slowing growth, while inflation remains above target. As Fed officials have stressed repeatedly in recent months, once the terminal rate is reached (which market pricing sees at c5%, although we think there is a material risk it needs to be higher, and if so, that would cause further market volatility), it will likely be held there for a prolonged period until there is strong evidence of inflation being on track to return to the 2% target. A recession may therefore not guarantee rate cuts, automatically or immediately. Market pricing of c50bps of rate cuts in H2 2023, therefore, looks optimistic, which could upset EM bond performance, and this assumes no further upside surprises to inflation.

Hence, the thesis that a US recession implies easier financial conditions for EMs – and is therefore perversely 'good' for EM bonds – may not hold. Instead, EM assets could be tested by a double whammy of lower growth and still-tight financial conditions.

To test this further, we look at the contemporaneous correlation between US growth and EM bond returns. Our sample looks at data over 1994-22, using annual data, with US GDP growth from the IMF WEO and bond returns for the JPM EMBIG on Bloomberg. We find no meaningful relationship over this period, with a correlation coefficient of -0.03. It is only slightly stronger (but more negative), at -0.05, if we restrict our sample to the pre-pandemic period. However, if we restrict our sample to 2003-19, before the pandemic but since the EM boom years, the correlation coefficient is stronger (and even more negative), at -0.17. Hence, the evidence of any kind of relationship between growth itself and returns is somewhat inconclusive.

However, we note that annual data might wash out information content and higher-frequency data (eg quarterly) may be more useful. 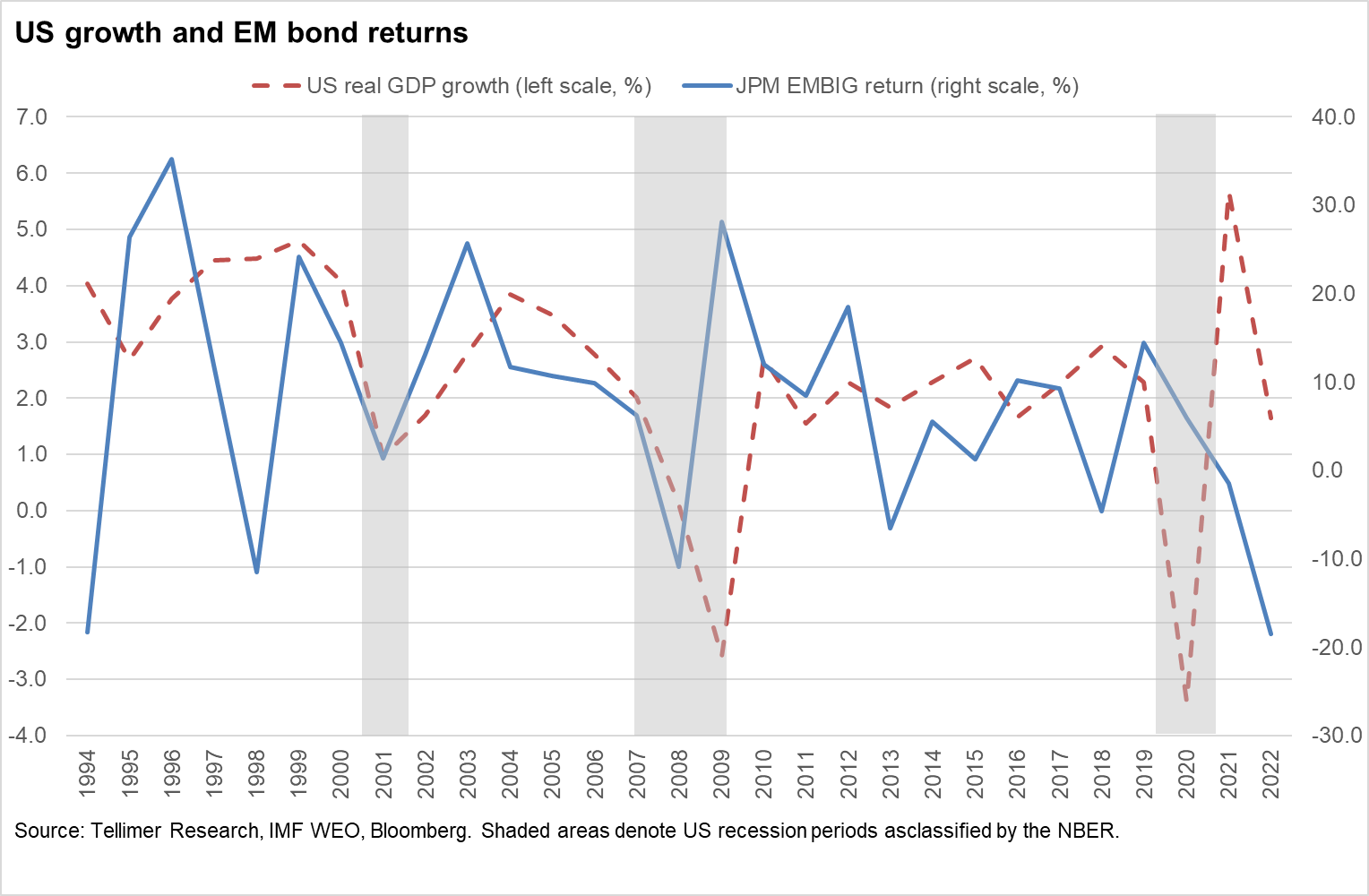 We find similar results if we look at EM bond returns and EM growth, which is even more revealing. The contemporaneous correlation is weak (but stronger than with US growth) and, rather than EM growth helping to predict EM bond returns, it is the other way around – EM bonds lead EM growth.

To conclude, a US recession may not be inevitable but, in any case, slower US growth could be associated with weaker EM growth, although the strength of this relationship is not clear cut. However, slower Chinese growth will also weigh on EM growth, accentuating the EM downturn. That said, despite a possible worsening in EM fundamentals as a result, we think the impact of a US recession on EM bonds per se is ambiguous, and bonds could be supported by the global policy response to recession risks – in the form of interest rate cuts.