There has been no let up in the selling of core market government bonds, with UK gilts driving the direction yesterday. Investors continued to ditch UK bonds despite the BoE extending its emergency measures to support the market. Investors are clearly still concerned over the policy direction that the UK is taking and thus we will likely see the market remain under pressure at least until the end of the month, when the latest fiscal statement and government forecasts are released.

USTs, meanwhile, are catching up to yesterday’s moves this morning, with the 10yr benchmark yield nearing the 4.000% handle for the first time since just before the last FOMC meeting. Those expecting a Fed pivot have been sorely disappointed and it is looking unlikely that a shift in policy from the US central bank is coming anytime soon. With the Fed effectively taking itself out of the market, the private sector has to step in a fill the demand gap. This is a massive task, and given current market conditions, such as high inflation and uncertainty over the growth outlook, those willing to step in are demanding a massive yield premium. Another factor to consider is that the other major buyers of sovereign bonds, but especially USTs, were Japanese pension funds. Now, they have been forced out of the market due to excessively high hedging costs, eliminating another major source of demand that cannot easily be filled.

Africa: To fill the financing needs of the industry as some financial backers may exit the market due to the global energy transition, African oil-producing countries are set to establish an energy bank in 2023. According to a spokesman for African Petroleum Producers, the African Export-Import Bank will immediately transfer $6bn when the energy bank is established, and negotiations are at an advanced stage. Moreover, additional funds will be sourced from other African countries, sovereign wealth funds, and national oil companies.

Ghana: Data from the Bank of Ghana showed that Ghana’s total debt stock rose to GHS 402.2bn in August from GHS 393.4bn in the month prior. The total debt stock equates to 68% of GDP and compares with 66.5% in July. In dollar terms, the country’s debt dropped to $53.2bn from $54.4bn in June. While external debt edged lower in the first seven months of the year from $28.2bn in January to $28bn in July (35.8% of GDP), domestic debt rose from GHS 181.9bn in January to GHS 190.3bn in July. According to the BoG, no new loans were taken out from the international credit market between June and July. However, the government took receipt of a $750mn Afreximbank loan in August.

Ghana: In a statement published on its website yesterday, Ghana’s Finance Ministry said that the government “remains steadfast in its resolve to speed-up negotiations” with the International Monetary Fund toward achieving an agreement that will help strengthen post-coronavirus pandemic economic growth. The ministry added that talks with the Washington-based lender will continue in the coming weeks, during the annual meetings of the World Bank and the IMF and that the government is “deeply encouraged by the progress made so far.” Securing an IMF deal swiftly remains key to helping Ghana address its deteriorating macroeconomic conditions.

Mozambique: Headline inflation in Mozambique decelerated slightly in September, coming in at 12.01% y/y from 12.10% y/y in the month prior. While the pace of price growth slowed in September, it remains elevated near levels last seen in August 2017. While inflation is expected to remain elevated in the short-term, the Bank of Mozambique projects inflation to fall back into single digits in the medium term as the aggressive rate hikes take effect against the backdrop of a resilient metical and high base effects of 2022.

Nigeria: Due to dwindling crude output, state-owned Nigerian National Petroleum Co. has had to defer payments to some local gasoline suppliers by at least three months. NNPC imports all the country’s gasoline for road transport, swapping most for crude with international traders and domestic groups. As the country’s oil production slumped to a multi-decade low of less than 1.2 million barrels a day, NNPC has asked local importers to permit payment delays of at least 90 days, according to its CEO. The executive is, however, confident that a rebound in crude production will allow the company to cover its deferred payment obligations. The CEO expects the country to add 500,000 barrels a day to its output by the end of November, mainly by restarting activities on the Shell Plc-operated Forcados export terminal and Trans-Niger pipeline.

Nigeria: Head of the Nigerian National Petroleum Co. has said that an investment decision on a $25bn gas pipeline from Nigeria to Morocco that could supply the fuel to Europe will be made in 2023. Last month, NNPC and Morocco’s National Office of Hydrocarbons and Mines signed a memorandum of understating, bringing the long-standing project closer to reality. The pipeline is one of two initiatives that the NNPC is pursuing to take advantage of the demand for alternative new sources of gas by European countries seeking to reduce their dependency following the war in Ukraine.

Oil: Oil continues to give up some of the gains made lt week, with global demand concerns balancing out the supply cuts that were announced last week by OPEC+. Brent has dipped back to $96 per barrel after reaching session highs of $98.75 per barrel yesterday, as major institutions such as the World Bank and the IMF flagged risks of a pronounced global economic slowdown. China also added to concerns over global demand yesterday, with authorities suggesting that there will be no let up to the country’s zero COVID policies, potentially limiting a demand recovery in the world’s largest oil importer.

The latest data from the Bank of Ghana (BoG) showed that gross reserves continued to fall in September. Specifically, Ghana’s gross reserves fell to $6.6bn from $7.68bn in August. The September level of reserves equated to 2.9 months of import cover and was the lowest since February 2019. Moreover, the decline added to the year-to-date drop of almost 32% in the level of reserves. 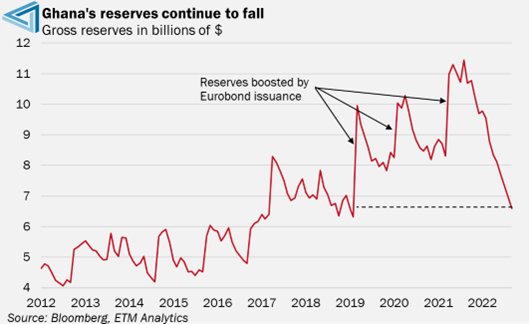 Ghana's reserves have declined partly due to the BoG's efforts to intervene in the FX market to improve dollar supply and slow the depreciation of the cedi. The cedi has lost north of 40% year-to-date against the USD and remains Africa's worst-performing currency. Until the aggressive tightening by major central banks began, Ghana could prop up its reserves through the issuance of Eurobonds. However, Ghana has effectively been priced out of the Eurobond market, and therefore the country is unable to boost its reserves position through the issuance of hard currency debt.

While the $1.13bn COCOBOD loan will bring in some much-needed foreign currency to support the cedi, the room for the BoG to use reserves to cushion against liquidity constraints and defend the currency continues to narrow as it is unable to tap into the capital market. Securing an International Monetary Fund deal and altering the current fiscal trajectory, therefore, remains key to improving Ghana's foreign exchange inflows outlook. Until then, we expect the bearish bias in the currency to persist, despite how undervalued the cedi is.

Fixed Income: Emerging market bonds are back on the defensive this week

Notwithstanding the topside surprise in the US jobs print, which bolstered bets for additional bold rate hikes from the FOMC, exchange-traded funds that buy emerging market stocks and bonds recorded net inflows last week. Specifically, inflows to US-listed EM ETFs amounted to $286.5mn last week, ending a two-week run of outflows that totalled $2.53bn. While emerging market assets have taken a bruising in recent months, inflows into EM ETFs have totalled $18.5bn on a year-to-date basis. 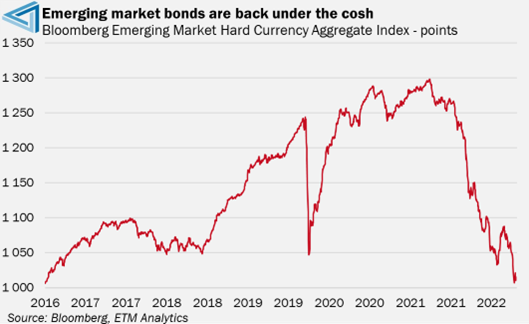 A breakdown of the data showed that stock ETFs expanded by $193.4mn, while bond funds rose by a lesser $93.1bn. The inflows were accompanied by a 2.5% rise in the MSCI Emerging Market Index on the week. ETFs focussed on Egypt, Nigeria, Kenya and Ghana all recorded inflows last week. South Africa focussed ETFs listed in the US meanwhile suffered a $7.28mn outflow last week, the largest outflow out of all the countries tracked by Bloomberg.

While EM ETFs attracted inflows last week, the broader bearish bias seen in the previous two weeks returned yesterday, with most emerging market bonds and equities kicking off the week on the back foot following the stronger-than-expected US jobs data on Friday and escalation in geopolitical tensions in Europe. Market directionality throughout the rest of the week will likely be dictated by the FOMC minutes on Wednesday and US CPI on Thursday. More hawkish rhetoric and signs that inflation in the US remains robust will likely come as a stern headwind for bond markets. That said, although unlikely, any dovish signals or a weaker-than-expected US CPI print could have the opposite effect on bonds.

Macroeconomic: Inflation risks in Egypt remain skewed to the upside

Inflation data published yesterday reaffirmed that inflation pressures in Egypt are acute. Headline and core inflation continued to surge in September, driven by a sustained depreciation in the Egyptian pound and elevated import costs. Specifically, urban CPI quickened from 14.6% y/y in August to 15.0% y/y in September, levels not seen since 2018. On a month-on-month basis, consumer prices rose by 1.6% last month. 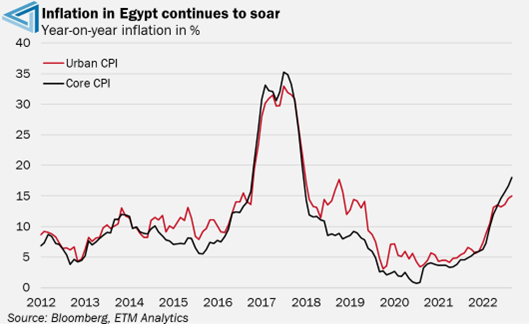 Arguably more concerning for policymakers was the sharp acceleration in core inflation, which rose from 16.7% y/y in August to 18.0% y/y in September. This shows that consumer price pressures are broad-based and not just a function of heightened food and fuel costs. That said, food was still a massive contributor to the strong inflation reading in September.

Currency weakness was also a contributor to the acceleration in inflation in September. Over the 12 months through to September 2022, the Egyptian pound had depreciated by around 25% against the USD, making the cost of imports significantly more expensive. With talk of more currency flexibility, the risk is that we see further depreciation in the pound in the months ahead, which will continue to compound inflation pressures. As such, the Central Bank of Egypt is expected to continue hiking rates in the months ahead.