Inequality a key issue for many, not China alone

Ageing population, new technologies outside its control, corporates with monopoly power, systemic financial stress, competition with the US and celebrity entrepreneurs are all threats to the power of the Communist Party of China (CCP) and President Xi Jinping. These factors have all contributed to the regulatory crackdown in the technology, education, gaming and real estate sectors seen in 2021.

However, economic inequality is also a common thread. Aggregate growth matters but growth in which most of the population participates and that does not widen the gap between the bottom and top of the social pyramid is more important. The CCP has to be seen to be delivering economic benefit to the masses, rather than disproportionately to an elite; otherwise, its legitimacy is in peril.

The phrase "common prosperity" has been used on CCP propaganda for decades. Under Deng Xiaoping (de facto leader from 1977 to 1989), common prosperity was best served by allowing certain regions and groups to lead the drive to prosperity: the Chinese equivalent of the concept of trickle-down growth espoused in 'Reaganomics'.

Xi emphasised common prosperity in his speech to the CCP Central Committee for Financial and Economic Affairs on 17 August, after which the committee communicated the need for "reasonably adjusting excess incomes" and for the economic elite to "give back more to society". Whether this is borne out of a sincere wish to address income inequality on moral grounds or because of a more practical need to avoid social unrest does not really matter for investors. The consequence is greater risk for large businesses: 'too big to fail' has turned into 'too big to succeed too much'.

The irony is that China is not that unequal compared with the US or many other emerging markets and the degree of its inequality has not changed that much over the past two decades. 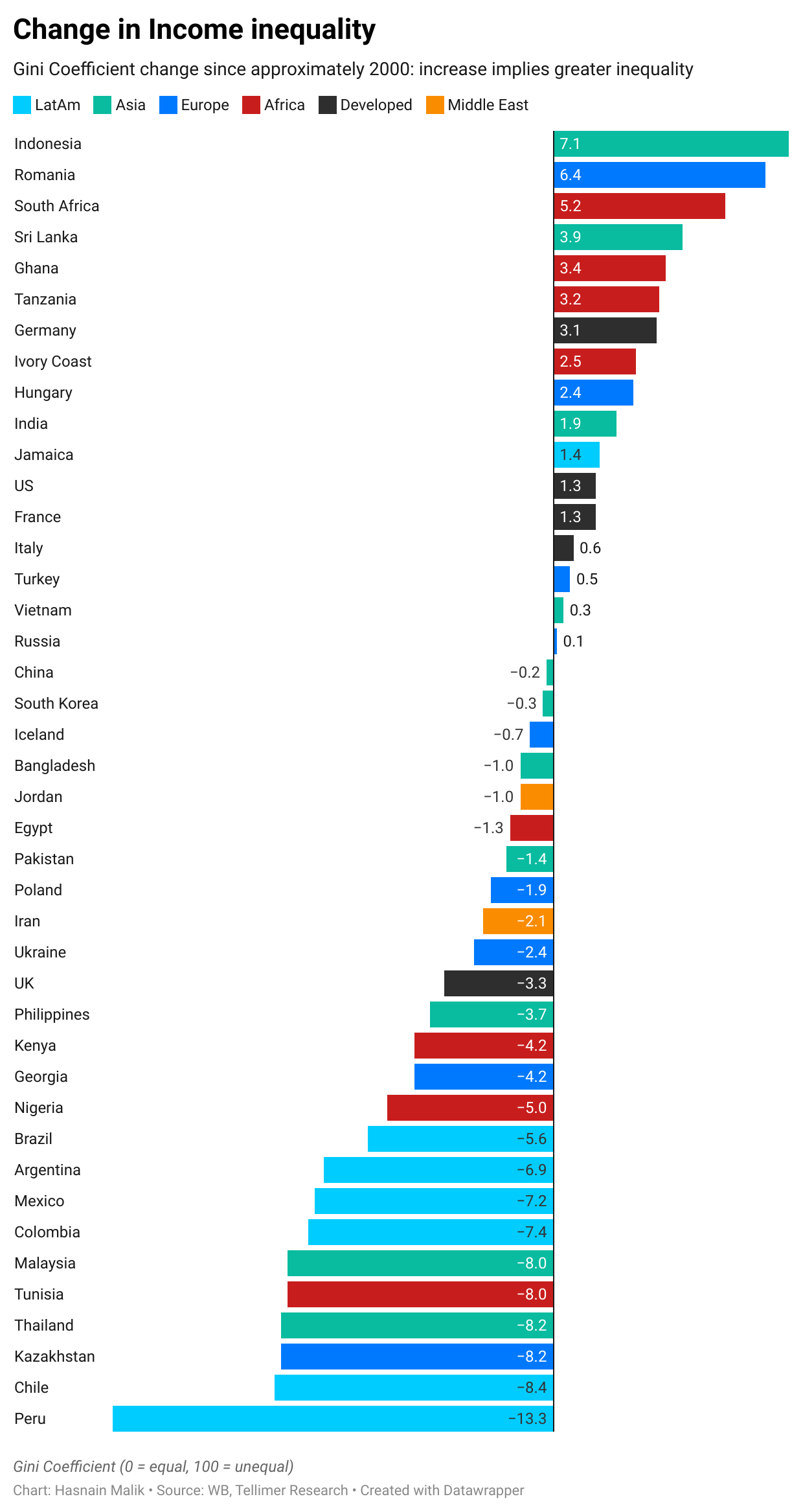 This leads to four questions.

First, does income growth beyond a certain level trigger more acute sensitivity to inequality? In LatAm, for example, income inequality is still high, sparking social unrest over the past couple of years. But inequality in LatAm has decreased more over the past two decades than in other emerging market regions.

Second, as modern internet-based media focuses more attention on inequality (in an age of wider access to information and disinformation), has it become harder to hide wealth disparities? Would the mass population in LatAm have been so quick to react to its political leadership with protests in the past two years if the preceding years had not been dominated by the Odebrecht scandal (which started in 2014 with Operation Car Wash in Brazil).

Third, is inequality simply another populist banner under which to campaign for political power, or, in the case of China, to reinforce it? The core goal of Xi's policies is unchanged since his ascent in 2012 – securing his personal grip and the party's grip on power – perhaps, the rhetorical veneer has simply changed from anti-corruption in his earlier years to tackling inequality. Politicians in other countries have similarly appealed to the notion of inequality for the purposes of grabbing the reins of political power. A policy agenda in the name of challenging the inequality resulting from unchecked capitalism is not unique to China. The same idea grounded the 2016 electoral campaign politics of former US President Trump and his first political strategist, Steve Bannon.

And, across the emerging markets, the pretext of addressing inequality has been reflected in the right-wing populism of East Europe (eg Poland, Hungary and Romania) and Brazil (Bolsonaro), the revival of the fortunes of the left in LatAm (Lopez Obrador in Mexico, the Peronists in Argentina, Lula in Brazil, Boric in Chile and Castillo in Peru), the appeal to the fortunes of the masses in Asia (Modi in India, Duterte in the Philippines, Khan in Pakistan and Rajapaksa in Sri Lanka).

Inequality has even been used as a rhetorical vehicle through which internal party rivalries have been played out, eg the backdrop of inequality was exploited by rival camps within South Africa's ruling ANC party after the jail sentence for former President Zuma. The intermittent intra-party rivalries that bubble to the surface in the form of ad hoc anti-corruption investigations and scandals in Vietnam could be viewed as an example of how Vietnam Communist Party leaders (the successful ones, at least) exploit a sense of inequality among the masses to vilify opponents. The split within Kenya's ruling Jubilee Party between the Kenyatta and Ruto factions has also been fought using the language of inequality and corruption.

Fourth, might other countries adopt the Chinese response to perceived inequality? In the rest of the world, central government generally lacks the requisite authoritarian tools for such abrupt policy shifts. The reliance on vested commercial interests, whether those are grounded, for example, in domestic private enterprise (Bangladesh, India and the Philippines), domestic military and intelligence (Algeria, Egypt, Nigeria, Pakistan, Russia and Zimbabwe), foreign multinationals (natural resource companies across LatAm and Sub-Saharan Africa) or tribal allegiance (Kenya), inhibit the scope of most political leaders, regardless of the sincerity of their stated ambition to address inequality.

The monarchies of Saudi Arabia and the GCC are exceptional in this regard; an even greater level of centralised control than China enables abrupt policy shifts; the Ritz Carlton Affair and Vision 2030 under Crown Prince Mohammed bin Salman is a prime example.

Perhaps authoritarian backsliding in democracies (eg India and Turkey) is not simply a concern for human rights activists but for investors too: ie does an authoritarian tilt in the political leadership eventually ensnare private sector corporates (under the guise of tackling inequality)?

We will continue trying to answer these questions in our analysis of how political risk impacts the investment case in individual emerging markets. Inequality is not disappearing anytime soon.

A century ago, alternative ideologies on how to tackle inequality spawned the battle between capitalism and communism. It turned out that neither camp's political leaders were all that interested in fixing inequality, but it was a highly effective way to appeal to the hearts and minds of the masses.

Politicians no longer stand on soap boxes, criticising or promoting Karl Marx, identifying themselves as capitalist or communist, and rallying calls and political slogans are now defined more by algorithms in social media echo chambers. But, as a way of persuading voters, penalising political opponents, justifying economic policies, or clobbering corporates, the subject of inequality remains as emotive as ever.