India’s super app race is about to heat up: Meet the contenders

Although it has been pushed back by a couple of months, the forthcoming introduction of Reliance Jio’s US$50 smartphone is likely to have a transformative effect on India’s digital economy, and could act as a template for other populous markets, such as Bangladesh, Indonesia, Nigeria and Pakistan. It is likely to give additional impetus to the ongoing battle to become India’s super app, and hence the main gateway for India’s 1bn+ consumers to access digital products and services.

In this report, we preview the Reliance Jiophone, survey the current app landscape, including the results of our proprietary consumer survey, and consider the main contenders in India’s super app race.

What is a super app?

The term super app was coined by Blackberry founder, Mike Lazaridis, in 2010 as “a closed ecosystem of many apps that people would use every day because they offer such a seamless, integrated, contextualized, and efficient experience.” It is essentially an app that gives easy access to other apps (‘mini apps’).

The advantage of this structure is that it allows users to access a wide range of goods and services from trusted partners with an easy-to-use interface and seamless integration. Greater trust and convenience increases customers’ transactional activity and significantly lifts customer retention rates, meaning customer acquisition costs can be reduced. The increased transactional activity also generates data, which can be used to deliver value at the individual level and for broader population groups.

Probably the two best super app examples hail from China, namely Ant Group’s Alipay and Tencent’s We Chat. Both these platforms have huge, overlapping customer bases (c1bn each) and offer a wide range of services to meet users’ daily needs and to help them achieve their life goals. 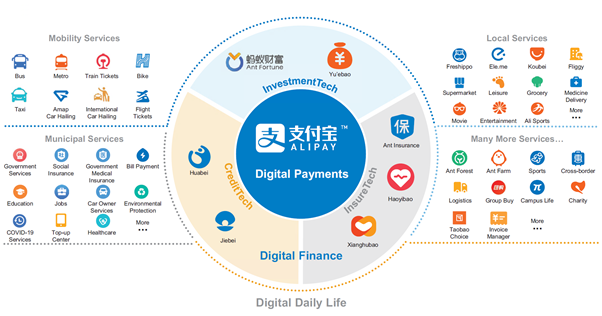 Why super apps are important

For consumers, super apps provide the advantage of a convenient, seamless customer experience, whether paying bills, taking transport, buying goods or seeking entertainment. For super app providers, their massive scale can help them squeeze value from suppliers that can then be shared with the end consumer.

Because of the increased frequency with which consumers access super apps, much richer insights into their individual needs can be obtained. Over time, these insights can help to build customer loyalty and differentiated products, generating long-term competitive advantage.

We think the super app model works better in emerging markets than developed markets. First, emerging markets tend to have more limited levels of financial inclusion, such as bank accounts and credit/debit card access. Accordingly, most transactions in these markets tend to be cash-based, which is a significant impediment to the development of a digital economy. Super apps can help develop in-house digital wallets that allow for fast, secure and low-cost digital transactions.

Another issue relates to the quality of hardware being used. Super apps can take up less memory than having a wide range of separate apps for different purposes, and therefore may be more suited to cheaper devices.

What super apps do

Super apps generally combine some or all of the following functions to cater to their clients’ needs:

Firms targeting to become super apps typically branch out from one of these core areas. For example, Alipay from payments and We Chat from messaging. In Asia, Grab, Gojek and Careem are attempting to branch out from mobility. In India, we see Tata trying to broaden out from delivery, Flipkart from e-commerce via PhonePe, Jio from search, Paytm from payments and SBI Yono from digital banking.

Given the size of the opportunity, global players are also taking part in India’s super app race. Two key advantages they have are deep pockets and high existing levels of engagement (see below). However, to appease local sensibilities, they have had to make certain concessions. For example, Amazon is offering free online education courses and Google has set up the India Digitization Fund. After many years of lobbying, WhatsApp was finally able to launch its WhatsApp Pay service last year, albeit with significant restrictions on user numbers.

How the Reliance Jiophone changes the game

Mobile phone penetration in India stands at a respectable 84%. But many of these are 2G feature phones. M-Pesa was famously able to successfully add payments functionality to such phones in Kenya, but for super apps offering a broader range of services such phones will not do. Smartphone penetration in India stands at just 32%. 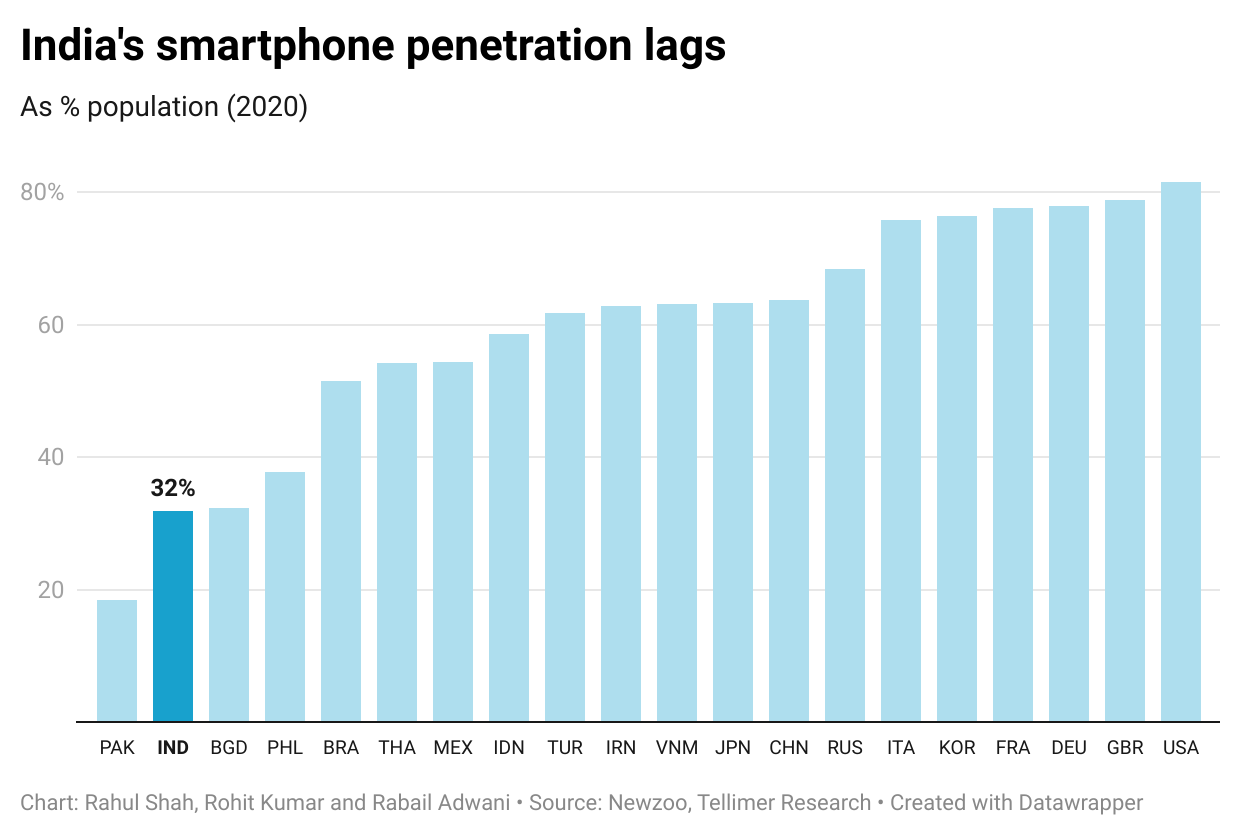 This is why the forthcoming launch of the Reliance Jiophone (developed in conjunction with Google) is so important for the development of the market. Some press reports have highlighted an INR3,500 price point (ie sub-US$50). Service bundles and financing options could further sweeten the offer for consumers. In a nation where the average monthly wage is cINR30,000 (cUS$400), smartphone ownership could suddenly become a mass-market trend.

Nevertheless, the failure of Tata’s Nano car provides a salutary lesson. Cost is not the only thing that consumers are looking for; reliability and a respectable level of functionality are also needed. Press reports suggest the phone is likely to use the Android 11 Go Edition operating system and be 4G-enabled. There will be a 5.5-inch display, with HD resolution. It will also have GPS and Bluetooth functionality. In the context of the super app race, it is worth noting that the phone will likely come pre-bundled with certain Google-developed apps.

One hiccup has been the delayed launch date. Originally scheduled for release earlier this month, the phone is now likely to be released in November, ostensibly due to chip shortages (the Jiophone reportedly uses the Qualcomm Snapdragon 215 processor).

What apps do Indians say they are currently using? 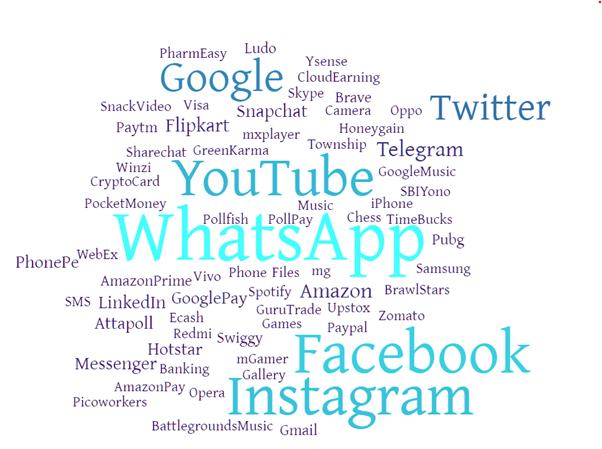 Breaking app usage by genre, social media dominates phone time, whether through messaging, networking, media sharing or video consumption. Since users are already heavily using such apps, they have a clear head-start in India’s super app race. Contenders in other areas, such as finance (payments, lending and so on) or e-commerce likely need to build in-house social media capacity or partner with existing providers.

This suggests that the We Chat super app model (where functionality is added on to a messaging backbone) may have a natural advantage over an Alipay-style super app (where payments is used as a hook to tag on other services). 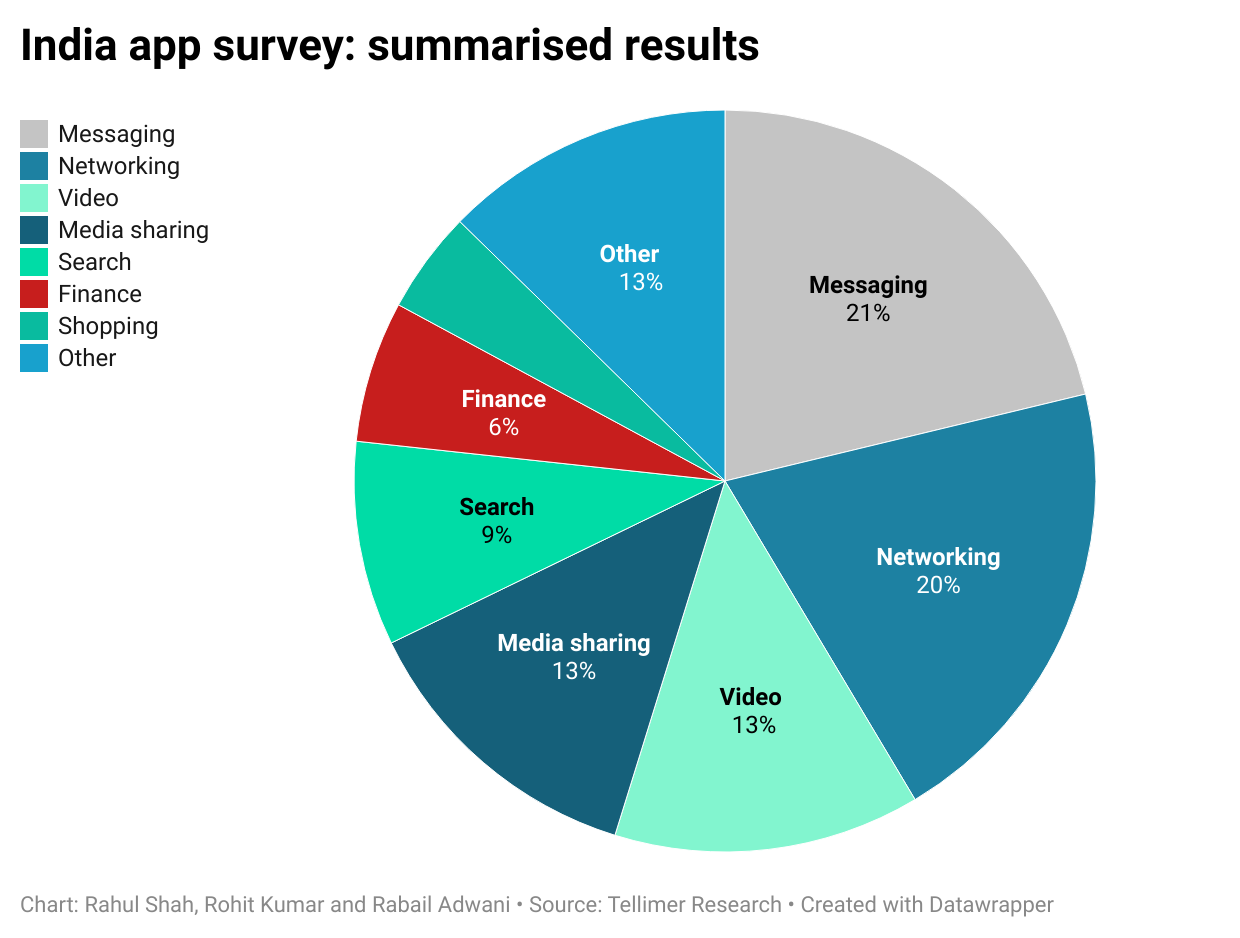 Who are the leading contenders in India’s super app race?

Paytm’s prospectus clearly signals the firm’s ambition to become India’s leading lifestyle app, with a smooth payments interface allowing users access to a wide range of products and services from their mobile phones. The forthcoming INR166bn (US$2.25bn) IPO will give Paytm significant financial firepower to help achieve its goals.

However, other firms also have their eyes on the prize, meaning the competition to become India’s app of choice is still in its early stages. In the table below, we highlight some of the leading contenders in the super app race.

Regulators may change the rules of the game

China is a large market where the super app model has proven to be particularly successful; Alipay and We Chat totally dominate the digital payments space. But regulators have recently clamped down hard on both firms, reducing their market power and loosening their partnerships and alliances. For example, Ant Group’s core lending products will need to be separated from Alipay’s super app.

For competitors in India’s super app race, even if they cross the winning line first, they may find that the prize is not what they were expecting.