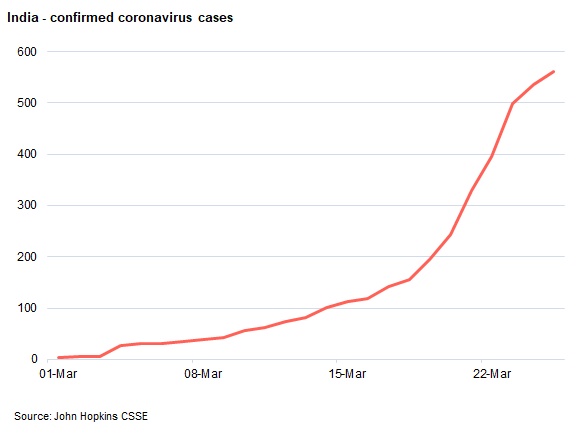 There are about 560 confirmed Covid-19 cases, 40 recoveries and 11 deaths (as of the morning of 25 March 2020), out of India's 1.4bn population. PM Modi followed some of India's state government actions and announced a 21-day nationwide lock down.

India equities (MSCI index) are down 40% (worse than down 32% for EM) and the FX rate has depreciated 6% ytd. Trailing PB and PE are on 35% and 30% discounts to the 5-year median, respectively (both deeper than the c25% discounts for both of these measures for EM).

India encapsulates many of our EM-specific coronavirus fears

Why coronavirus may be even more damaging for EM than DM

The main argument why most emerging markets will emerge from the coronavirus crisis less damaged than developed markets is their generally younger demographic bias (most fatalities reported globally have been concentrated in older segments of the population). There are two problems with this argument:

(1) While it is of course true that the average age in emerging markets is generally lower than in developed, the demographic represented most by the political elite (who take policy decisions) is likely equally aged. Furthermore, to the degree that many emerging markets have less ingrained (or robust) democratic institutions than in developed markets, the politically most important constituencies tend to come from the older parts of society (e.g. there are no millennials among the leadership of political parties in emerging markets, let alone among the army generals of Egypt, Pakistan, Thailand, or Zimbabwe, or among the tribal leaders in Nigeria, or among the religious hierarchy in India, Iran, or Saudi, for example).

(2) The focus on youthful demographic bias ignores a range of other factors that generally make it harder for the emerging markets to counter the coronavirus. These include the following:

These challenges and others (such as a generally older demographic bias) also exist in developed markets but financial resources, welfare state safety nets, healthcare infrastructure, better rule of law, greater levels of education, may mitigate them, all other things equal (eg early imposition of social distancing).

Most emerging and frontier countries face these multiple challenges in dealing with coronavirus and are not able to replicate the draconian social isolation imposed by China, or the combination of widespread testing and (belated) social isolation implemented by South Korea. And it remains to be seen whether we have seen the last of critical infection spikes, or, indeed, how reliable is the data released on infections (eg China new infections have barely changed for the last three weeks).

That makes these challenges almost universal: it is wishful thinking to imagine that particular countries (or, entire continents, like Africa) may be relatively immune from severe disruption related to coronavirus.