India: From incredible to in trouble? No, just in between

The international investor perception and mainstream media coverage of India has quickly changed.

For several years, India was described as a high growth economy, governed by a business-friendly government with an absolute legislative majority in a liberal democracy, aligned with the US on account of its large consumer market and its potential as geopolitical bulwark against China in South Asia (illustrated by the public bonhomie between President Trump and PM Modi). Indian equities, measured by the MSCI India Net Total Return USD index, rose c50% between the end of the May 2014 election and the January 2018 peak.

More recently, India has been described as an economy impaired by bad loans in the banking system, faltering consumption, low levels of investment, questionable historic data on growth, a domestic political environment of illiberal majoritarianism, and a US relationship coloured by tariffs and trade disputes. Indian equities (again measured by the MSCI India NTR USD index), are c5% below that January 2018 peak, despite an even bigger legislative majority for the Modi-led coalition in the May 2019 election. Trailing price/book of 3.0x is in line with the 5-year median.

As often is the case with such reversals in perception, the truth before and after the reversal usually lies somewhere in the middle. Perhaps India was never incredible, just as now it is not in trouble. What has changed is that in his second term (and in the election campaign which preceded it) PM Modi appears to be using his political mandate for foreign policy and social reform rather than economic reform, and that makes for a less attractive environment for foreign investors. This matters when aggregate consensus corporate earnings projections for 2020f (24%) and 2021f (18%) imply growth not seen since 2010 (25%) and are seemingly inconsistent with GDP growth forecasts (real or nominal). 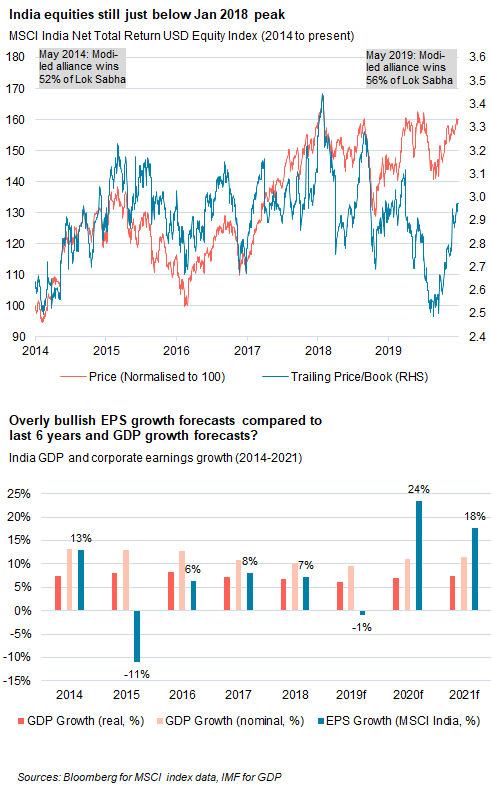 India is neither the next China (it lacks the centralised, authoritarian tools for rapid reform and it lacks the infrastructure, power supply and deep-water port access for large scale manufacturing exports), the next Asian tiger (historically it did not enjoy similar favoured trade access to the US or the blanket security cover from the US, it did not undergo the painful reforms following the 1998 financial collapse in those countries, and it is not yet grappling with the challenge of the middle-income trap), nor the next Egypt-Pakistan-Thailand (it is not an army with a country).

With all its complexity and contradictions, India is the next India. The same scale that makes it such an undeniable consumer market also makes it such a diverse and fragmented political system (which is resistant to centrally driven structural reform). The same sense of confidence and national pride which drives domestic consumption by the middle class and investment by the wealthiest segment of the domestic population and the diaspora, has also fostered an environment where dissent is dismissed as unpatriotic, as opposed to something which should be protected under the banner of democratic liberty. The same geopolitical position that makes it a potential regional balance against Chinese territorial ambitions also makes it vulnerable to encirclement should the Chinese more effectively establish client-state relationships with the likes of Myanmar, Oman, Pakistan, Sri Lanka, and even Bangladesh, and ultimately build out the “string of pearls” of naval assets feared by India in the Arabian Sea and Indian Ocean.

The reversal in the international perception of India says as much about the tendency for international coverage to veer from overly optimistic to overly pessimistic when it comes to emerging and frontier markets. There is rarely any middle ground. Brazil, South Africa, and Turkey are similar examples of large emerging markets that have oscillated from darlings to a pariahs (and back to a darling in the case of Brazil). In frontier markets, these swings are even more extreme, not because the underlying institutional fabric is always weaker, but because the liquidity of financial markets is so much thinner (which, in turn, means valuations alternate even more wildly between euphoria and despair).

Perhaps, a more honest recognition of the strengths (during periods of consensus scepticism) and vulnerabilities (during periods of consensus bullishness) is in order. And for this to happen, perhaps emerging and frontier markets should not be viewed so opportunistically (e.g. in favour only when US and developed markets are not promising out-sized returns, as opposed to more durable through-the-cycle portfolio diversification) and so exotically (particularly in an era when the US under President Trump, the UK during Brexit, France during the yellow vests movement are examples of developed markets exhibiting some of the characteristics usually associated with the exotic emerging and frontier universe).