India, China, Pakistan detente but we've been here before so low expectations

An Indian detente with Pakistan and China is underway. This is obviously a positive development but should not change an assessment of the risks: a permanent reconciliation of competing strategic interests is low but so is the likelihood of a prolonged hot military conflict. The Kashmir-Ladakh-Aksai Chin region is a key point of competition for influence and territorial control between India, Pakistan and China. The region's glacial water flows, mineral resources and transportation routes are coveted by each but neither India nor the combination of Pakistan and China is any more able to assert their claims today than in previous decades.

The 25 February agreement between India and Pakistan to cease fire across the shared land border followed the partial pull back of troops by India and China in the Ladakh region two weeks earlier. The India-Pakistan agreement came after a year of increasing use of heavy artillery in cross-border exchanges, about a year and half after India's decision to revoke the special autonomous status of Kashmir, two years after the exchange of fire between fighter jets, and decades of friction and wars (1947, 1965, 1999). The India-China partial truce follows direct clashes, which led to fatalities on both sides in 2020, the build up of logistics infrastructure in the years before, and decades of low-level friction and short wars (1962, 1987).

Putting to one side the rhetoric and policies of Hindu nationalism that have demonstrable appeal at election time for Prime Minister Narendra Modi, India is motivated to reduce tensions with Pakistan and China, albeit with as little concession as possible. India cannot win a two-front conflict, particularly when its opponents on those two fronts are allied with each other, and cannot be sure of decisive US military support should those conflicts arise. Pakistan no longer so internationally isolated, as a result of both China's logistics ambitions, exemplified by CPEC (China Pakistan Economic Corridor), and the US desire for something resembling an orderly withdrawal from Afghanistan. China has demonstrated in the South China Sea, the Taiwan Strait, and on the Indian border that it is increasingly willing to flex its military muscle. Attempts by the Biden administration to muster an anti-China coalition, which includes the EU and the Quad (Australia, India, Japan, US) likely reinforce this. India's economic leverage with Pakistan and China is very limited: trade with Pakistan is minimal and China is more important for Indian exports (9% of its total) than the other way round (exports to India are merely 3% of China's total).

Pakistan has the most to gain from greater cross-border trade, investment and transport, but the portrayal of India as an existential threat grounds the supremacy of the military (in terms of budget autonomy and political power). Poor relations with India, and less alignment, today compared to two or three decades ago, of foreign policy interests with its two historic external sponsors, the US and Saudi, is what pushed Pakistan to seek as many of these benefits as possible from China alone, via CPEC. While trade and investment relations with India might one day prove very important, Pakistan's motivation in reducing tensions with India are grounded, for now, in security: water supply from the Kashmir region and destabilisation of the Pakistan federal government's interests in both the province of Balochistan (rich in minerals, the starting point for CPEC) and in neighbouring Afghanistan (with which the border is porous).

China's interests in this region are identical to those which drove it to cultivate Pakistan as a client state and implement CPEC: trade-driven growth of its relatively underdeveloped western regions (ie trade with central Asia, the Middle East and Africa) and a transportation short-cut which reduces the vulnerability to choke points (where the US navy remains dominant) around, for example, the Straits of Malacca, of raw material and finished goods transit to and from its relatively developed eastern regions. As long as the US regards India as a key piece of its anti-China coalition, there is little prospect of China and India aligning in a strategic manner and, therefore, coordination with Pakistan on the credible threat of conflict on two fronts establishes leverage in China's dealings with India. 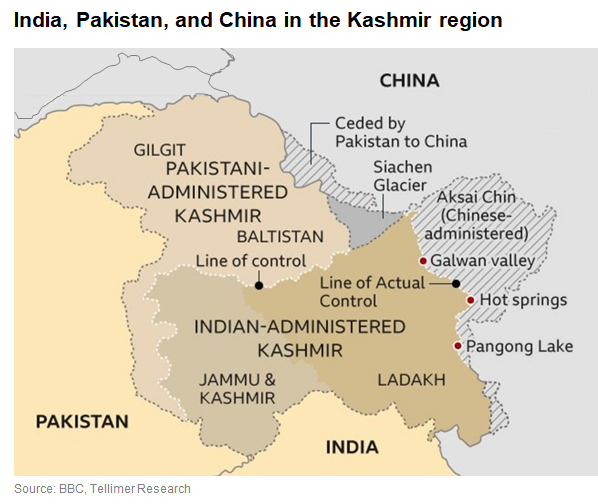