Neighbours India and Pakistan share so much in common: religious and ethnic diversity, cultural and culinary characteristics, huge and youthful populations, and, of course, perhaps the most enduring aspect of their shared experience of British colonial rule, the mass opium of cricket.

However, as they both mark their 75th anniversary of independence, their differences and geopolitical friction define them more than their similarities. Sadly, this is very likely to continue, although the prospects of a widespread, hot military conflict are low, given the deterrent of mutually assured destruction.

They are similarities in the top-down investment cases of India and Pakistan but, particularly for equity investors, they are worlds apart, in growth prospects, external account risks, size and liquidity, and valuation.

The first part of this report argues why the key respective domestic and external vested interests have more to gain from conflict and mutual suspicion than cooperation.

The second part of this report presents ten charts and tables on some of the key macroeconomic, social, military and equity market comparisons between India and Pakistan — for completeness, Bangladesh, formerly East Pakistan, which marked its own 50th independence anniversary in March 2022, is also included.

India and Pakistan should have the sort of cross-border trade, investment, and migration enjoyed by the US and Canada, Brazil and Argentina, Australia and New Zealand, or South Africa and Zimbabwe. Instead, their relationship, since independence in 1947, has looked even worse than that between Turkey and Greece, Russia and Ukraine, or China and Taiwan. South Korea and North Korea might be the closest comparable.

This is unlikely to change, given that the message of mutual fear and distrust underpins the two respective dominant internal political powers, the Bharatiya Janata Party (BJP) in India and the Military-Intelligence deep state in Pakistan.

In India, the BJP already has a 56% outright majority in the lower house of parliament and its performance in the March 2022 state elections suggests there is no prospect of a nationally unified and competitive opposition in the 2024 general election.

In Pakistan, an army chief seeking another extension of his term was the trigger for de-throning the Imran Khan-led government in April 2022, again demonstrating the junior role occupied by civilian politicians in Pakistan — although the subsequent mass political awakening sparked by Khan may yet prove a moment of profound change.

The dominant external, geopolitical influences also continue to pull India and Pakistan apart. India is now clearly aligned with the US in the Asian theatre, in overlapping opposition to China, which, in turn, is closely aligned to Pakistan. Although Pakistan tends to enjoy better US relations under Republican presidents, the strategic alignment of the US in the region is unlikely to change.

Some top-down similarities but investment cases are worlds apart

As top-down investment cases, India and Pakistan do share a number of common features, eg:

However, for investors, India and Pakistan are currently worlds apart.

In our Country Index India scores well above Pakistan

The Tellimer Country Index weighs about 30 factors on growth, policy, politics, sanctions, ESG, equity valuation, liquidity — all of these weights can be customised. 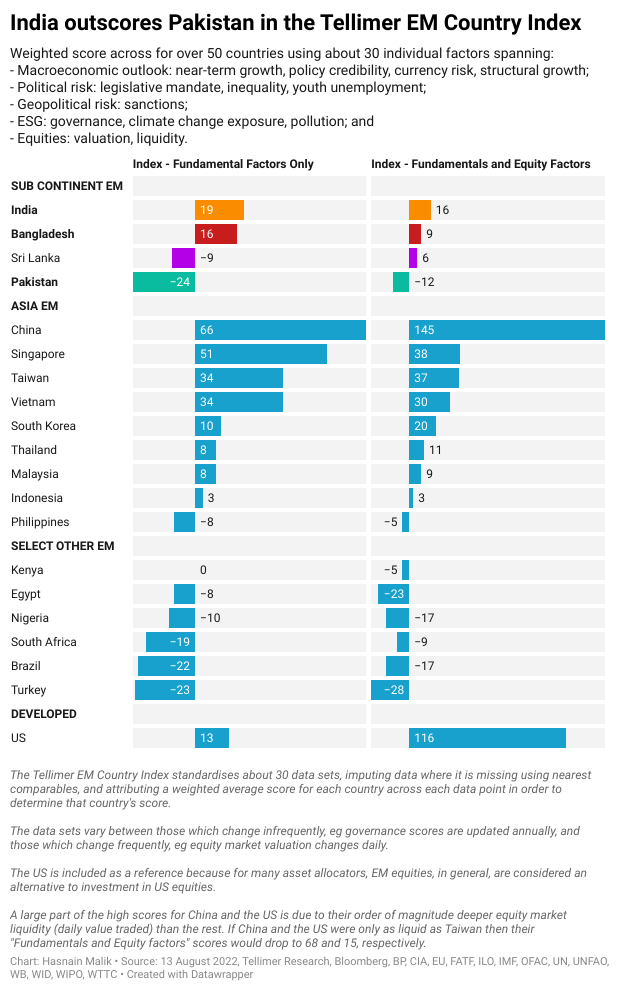 10 charts on macroeconomics, society, military, and markets to mark 75 years of independence 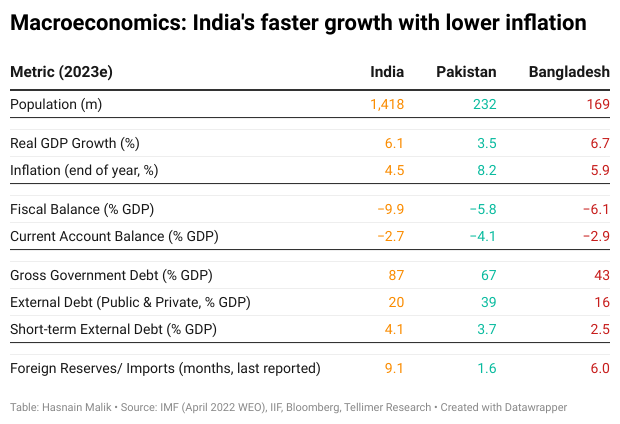 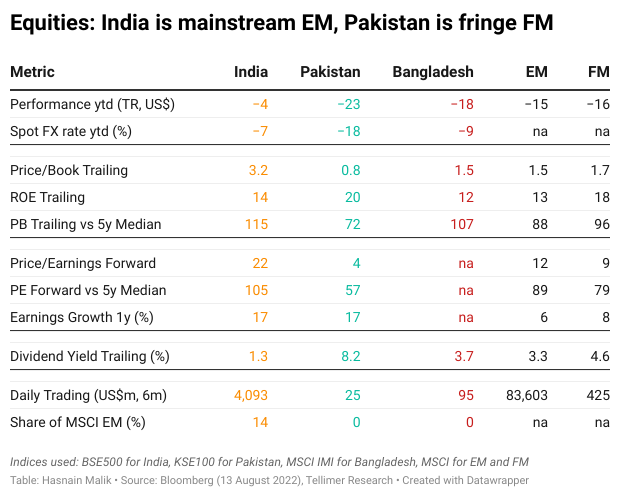 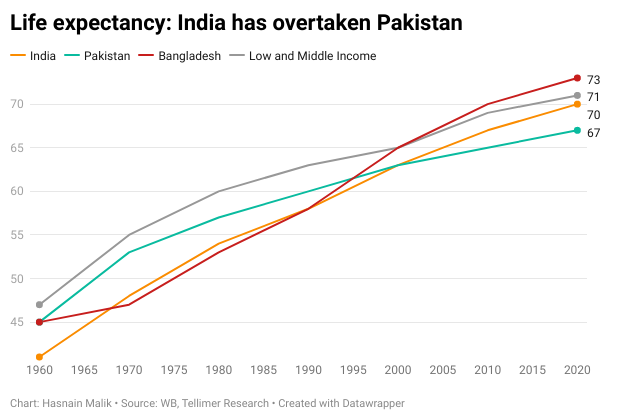 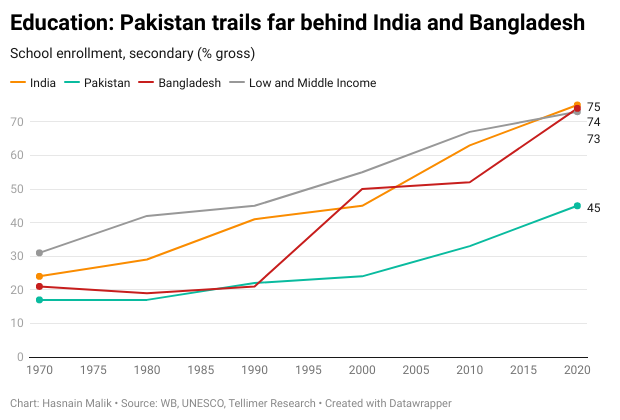 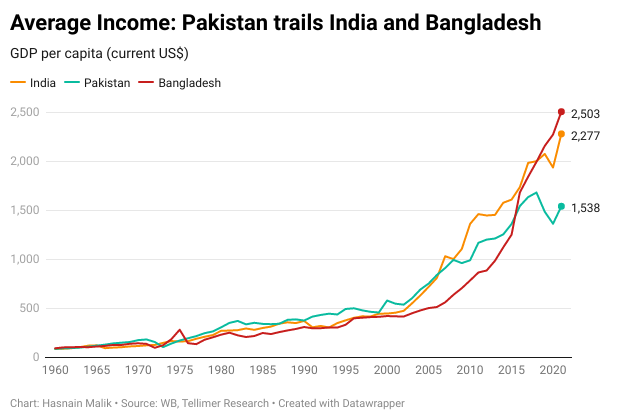 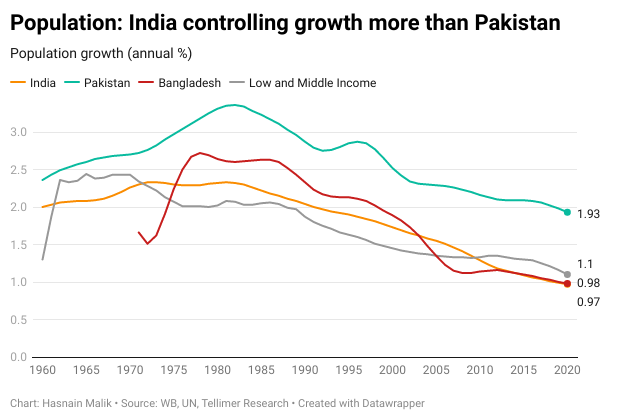 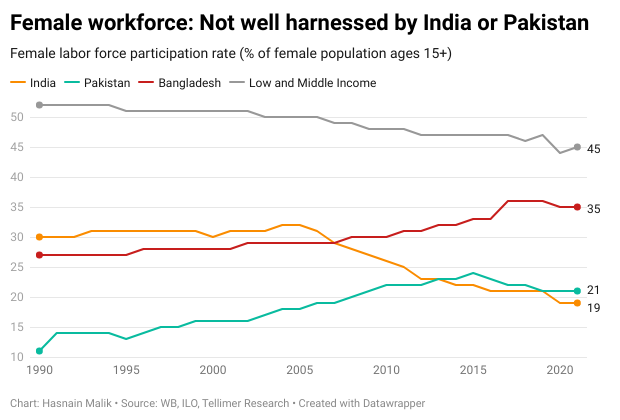 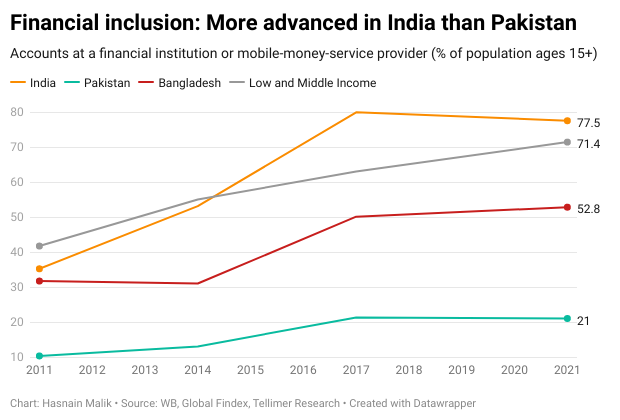 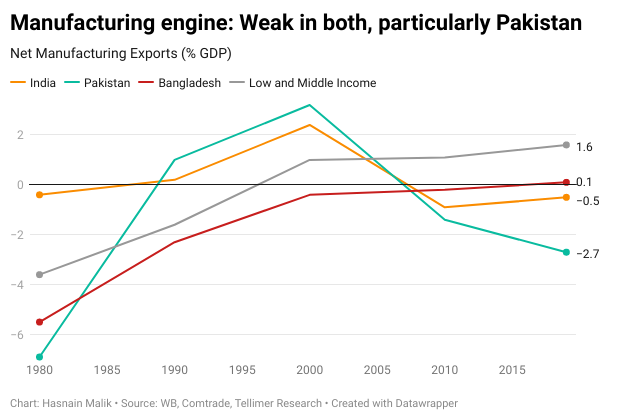 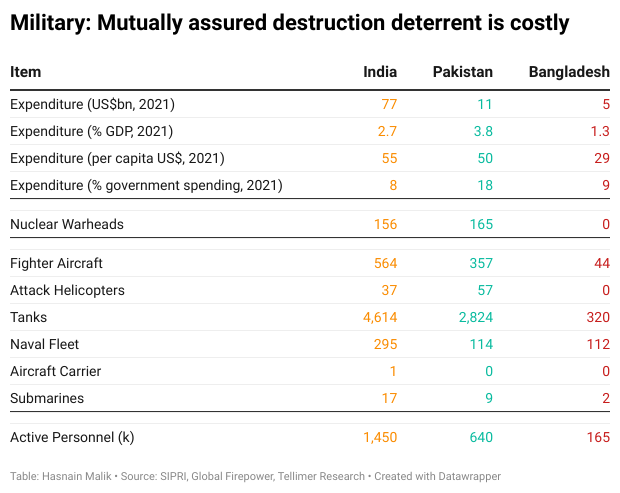