US Treasury yields rose once again yesterday following some hawkish comments from Fed speakers ahead of today’s non-farm payrolls data. The 10yr yield rose to back over 3.800% while the 2yr yield surged to 4.250%, marking a significant turnaround after it dipped below 4.000% earlier in the week. We are seeing some consolidation this morning but the gains are being maintained. The gains in yield were also driven by a further surge in gilt yields, as the UK market remains volatile as traders brace for the BoE’s bond-buying backstop to come to an end next week.

The focus will now be on the US non-farm payrolls data today. After a strong ADP print earlier this week, expectations are that the figures should show that hiring in the US is still robust. The risk to the market, however, seems to be asymmetrically skewed toward a weaker print, given that a strong reading is likely priced in already. Therefore, any weakness in the data today could see bond yields retreat, albeit unlikely back to levels seen in the first few trading sessions of the week.

Mozambique: Mozambique's S&P Global PMI fell to an 8-month low of 50.5 in September from 50.8 in the month prior, pointing to a further slowdown in growth across the private sector economy. Survey results showed that firms saw new business rise at the weakest pace for eight months amid slowing client demand. The softening fed through to a weaker rise in employment and the first drop in input purchases since February. On a positive note, business optimism picked up to a three-month high amid hopes of higher sales, greater hiring, and a continued bounce back from the pandemic.

Namibia & Zambia: Namibia and Zambia have agreed to build a gas pipeline to fuel power plants. The accord signed by the two countries will stretch from the coastal town of Walvis Bay in Namibia to Zambia’s capital, Lusaka, and carry at least 350mn cubic feet per day of feed-stock for power plants. According to Namibia’s Mines Minister, Tom Alweendo, “if executed as planned, this project has the potential to un-lock economic potential, not only for Namibia and Zambia but for the Southern African Development Community region as a whole.” The project is being driven by the private sector and aims to provide Zambia with a constant energy supply, with the port of Walvis Bay being used as a docking port for Zambia’s oil and gas supplies.

Uganda: The Bank of Uganda delivered its fourth straight hike yesterday as it continued its fight against inflation. The BoU raised the benchmark rate by 100bps to 10%, the highest level since 2019. The move by the BoU takes cumulative rate hikes since June to 350bp, making it one of the six central banks on the continent that have hiked by three percentage points or more this year. The BoU signalled further rate hikes could be on the cards, with Deputy Governor Michael Atingi-Ego saying, "the Bank of Uganda remains determined to rein in on inflation and will continue to undertake the necessary measures to restore inflation to its target of 5% in the medium-term." The BoU fore-casts inflation to average 7.3% this year and in the range of 8%-10% in 2023 before declining back to target in 2024. Atingi-Ego did, however, say risks to the inflation outlook remain tilted to the upside.

Uganda: To help increase revenue from trade by as much as $6bn in the next five to seven years, Uganda is planning an export credit fund. According to the Chairman of the Presidential Advisory Committee on Exports and Industrial Development, the committee is consulting equity funds, development lenders, private sector foundations, and the Uganda Bankers' Association about a single platform for the fund. The Chairman added that, in addition to affordable financing for producers, the committee plans to boost exports by improving compliance with sanitary requirements and designing fresh market entry strategies. Companies dealing with coffee, fish, fruits and vegetables, bananas, flowers, cement, steel, poultry, and beef are set to be prioritized at the start.

Zimbabwe: Fidelity Printers and Refiners, Zimbabwe's sole authorized gold buyer, reported that the country's gold output rose 35% y/y in the first nine months of 2022 to 25,666.4 kg. Meanwhile, in September, miners produced 3,376kg, compared with 3,171.8 kg a year earlier. Big mines produced 988.3 kg, while small-scale producers had 2,387.7 kg. Note that Zimbabwe is aiming to produce 35 tons of bullion this year from 29.6 tons in 2021. Increasing gold production will benefit Zimbabwe, given it is a major source of foreign currency revenue.

Oil: Oil is set for its biggest weekly gain since March this week, following the announcement by OPEC+ that it would be cutting output from November. Brent has surged from below $85 per barrel to near $95 per barrel as a result, nearing its highest levels since mid-September. The rally does, however, appear to be running out of steam now with the front-month contract hitting resistance at the 50DMA . Open interest levels have also started to taper off now after rallying as the price surge kicked off. This suggests that we may be in for some consolidation over the next few sessions, with traders looking to adjust to the new supply dynamics.

Official data from the Central Bank of Egypt showed that Egypt's current account deficit in the fiscal year 2021/22 declined by 10.2% to $16.6bn vs $18.4bn in the previous year. The narrowing of the current account deficit resulted from an unprecedented increase in oil and non-oil merchandise exports and the significant recovery of tourism revenues. Oil and non-oil merchandise exports jumped by 53% y/y to $43.9bn. Meanwhile, tourism revenues almost doubled to $10.7bn in the fiscal year 2021/2022 as tourist numbers visiting Egypt's cultural and resort destinations picked-up despite the drop in Russian and Ukrainian arrivals since March this year.

While the current account deficit narrowed in the fiscal year 2021/2022, it remains sizeable and leaves Egypt vulnerable to external shocks, as witnessed by the reaction to Russia's invasion of Ukraine earlier in the year. While the CBE devalued the pound in response to boost the competitiveness of its exports and position itself for a loan from the International Monetary Fund (IMF), it has not been sufficient. Given that Egypt needs to reduce its funding gap and make space for debt repayments, risks for another devaluation exist. The IMF has already called for greater exchange rate flexibility to avoid another build-up of external imbalances and to facilitate adjustments to shocks suggesting that exchange rate flexibility is a priority during ongoing funding talks.

The Egyptian pound is currently overvalued on a real effective exchange basis by more than 7%, suggesting that room for devaluation exists. A more flexible currency system is thus required to cope with the fallout of the war and correct economic imbalances, while making Egypt less vulnerable to external shocks. 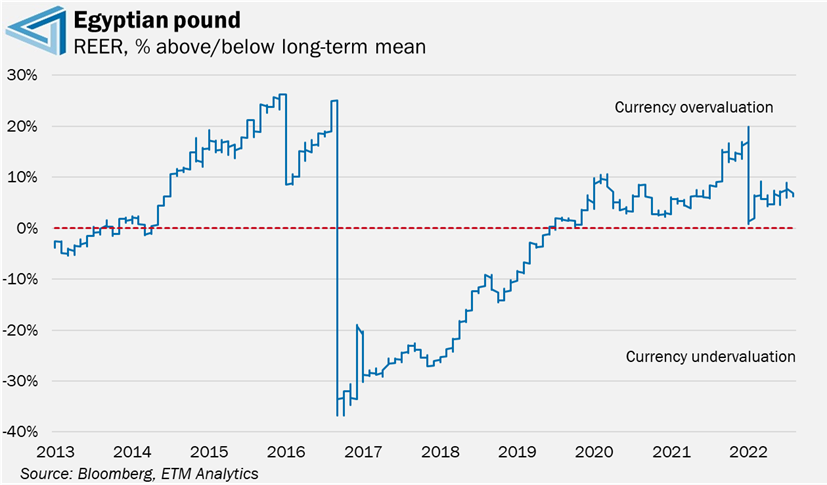 Nigerian foreign and domestic borrowing is set to increase by 15% next year as the Senate has agreed to an 8.4trn NGN borrowing package for 2023 to help fund the country's budget shortfall. The approved increase comes as President Buhari is set to announce the country's spending plans for next year today. The presentation of the budget today may also give more details on the issuance of the additional debt, including maturities and the breakdown of foreign and local issuance.

The increase will add to the country's already high debt burden, and comes at a time when financing costs both local and abroad are rising. Nigeria's debt servicing costs have already exceeded revenue for this year so far, and could reach as much as 102% of total government revenue by the end of the year, according to forecasts released by the World Bank.

High debt servicing costs are not Nigeria's only problem at the moment, as revenue has been lower than expected due to declining crude output. The government achieved less than 40% of its projected revenue from crude in the four months of 2022 up until April, according to the last government figures. High fuel subsidies are also adding to the burden and are expected to reach 6.7trn NGN next year. with its creditors to restructure 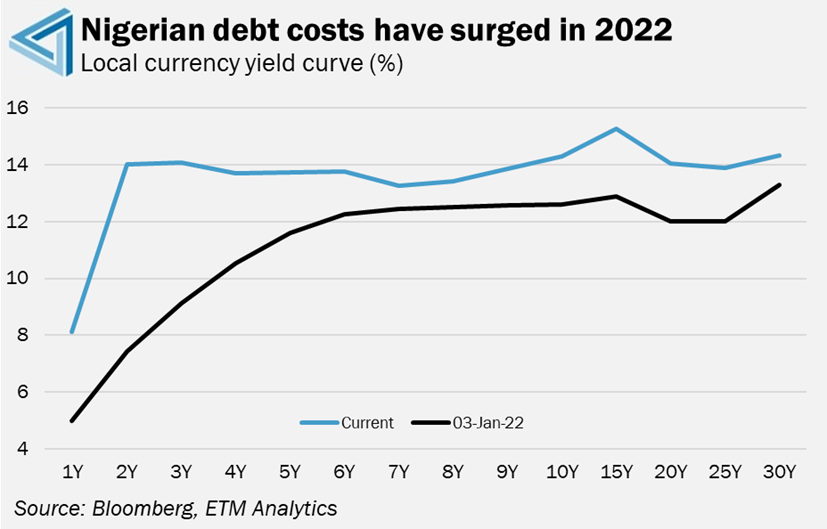 The central bank of Ghana raised its benchmark interest rate by 250 bps to 24.5% yesterday. This marks the 4th increase that the bank has implemented since the start of 2022 and takes the cumulative total of hikes to 1000 bps as Ghana's economy has struggled with various setbacks, such as rising public debt, elevated inflation and a depreciation in the currency. Since the start of this year, inflation in Ghana has risen to record highs. Along with the rest of the world, Ghana's inflation has been driven by high food and fuel prices. The central bank delayed interest rate hikes until inflation went from 13.9% to 19.4% in January, which was followed by massive depreciation in the cedi. Therefore, the central bank is behind the curve when it comes to tightening and has now had to play a bit of catch-up. The central bank has now become very aggressive, with the rate hikes seeming to be insufficient at curbing rising prices. Given current inflation, real rates remain deeply negative, suggesting that there is notable scope for further tightening ahead. If we take a closer look at the cedi's year-to-date performance, the currency has depreciated by 40.83% compared to the USD. The central bank's larger-than-expected hike illustrates the bank's commitment to reigning in inflation and trying to prevent further cedi depreciation. However, with neither the currency nor inflation seeming likely to improve significantly over the near term, we will likely see the central bank of Ghana maintain its hawkish stance for at least the remainder of the year. 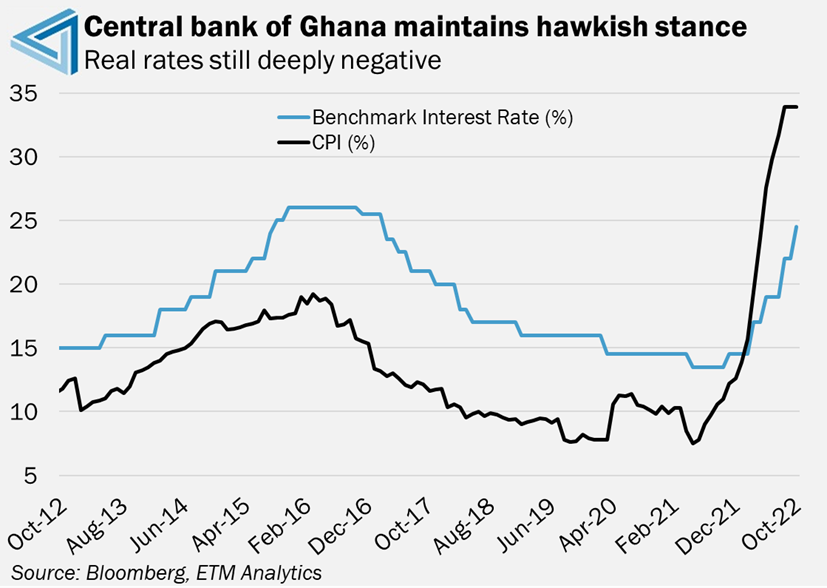