In a multipolar world, military spending looks set to explode

Despite news headlines being dominated by stories of conflict and strife, global military spending, as a percentage of GDP, is close to historically low levels. 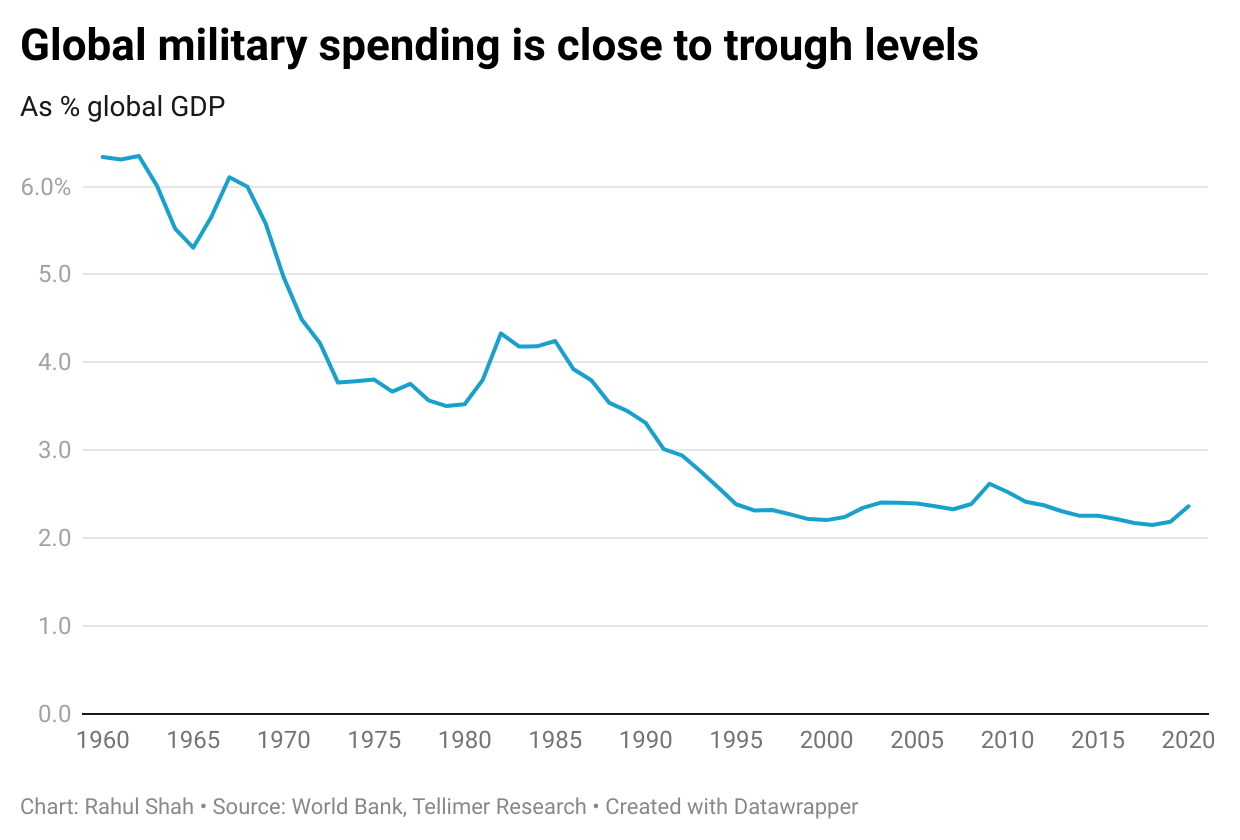 A key reason for this is the long-standing hegemony of the US; its allies can bask under its protection, while would-be foes know that conflict is unlikely to succeed. US military spending dwarfs that of other countries, and it also enjoys a huge technological advantage in many areas. 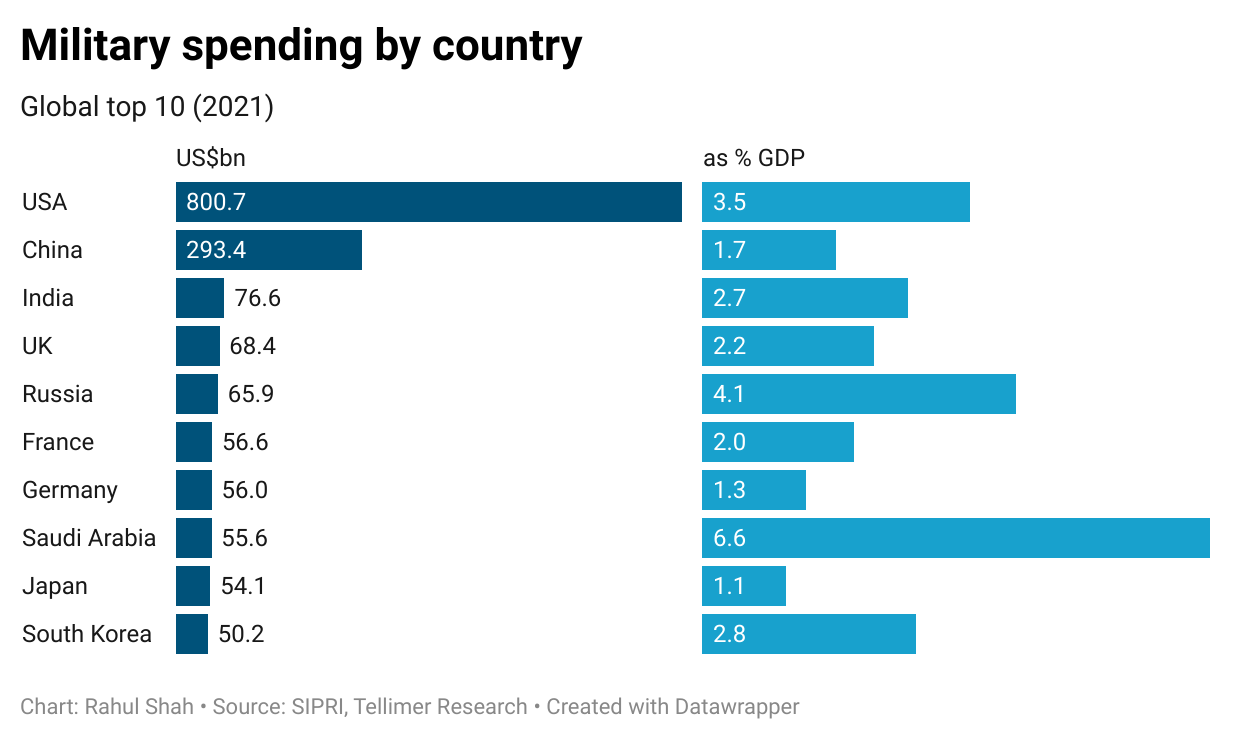 However, this longstanding status quo is starting to fray. Despite its overwhelming superiority of resources, clear-cut military victories for the US have been few and far between, providing succour to regimes or factions that wish to resist. At the same time, we are seeing a new phase of nuclear proliferation; with the technological genie firmly out of the bottle, both in terms of warheads and the means to deliver them, ‘rogue’ states are actively working to fulfil their nuclear ambitions.

Finally, the spending advantage the US has, though large, has been eroding. The country’s share of the global military budget is below 40%, close to multi-decade lows. And its spending ratio versus China is currently c3:1, down from 10:1 at the beginning of the century. This is close to the US/USSR spending ratio in the early 1990s; a key difference being that China’s spending is growing rapidly (9% pa over the past decade, and still low relative to GDP), while the USSR at that time was struggling to service its large military budget. 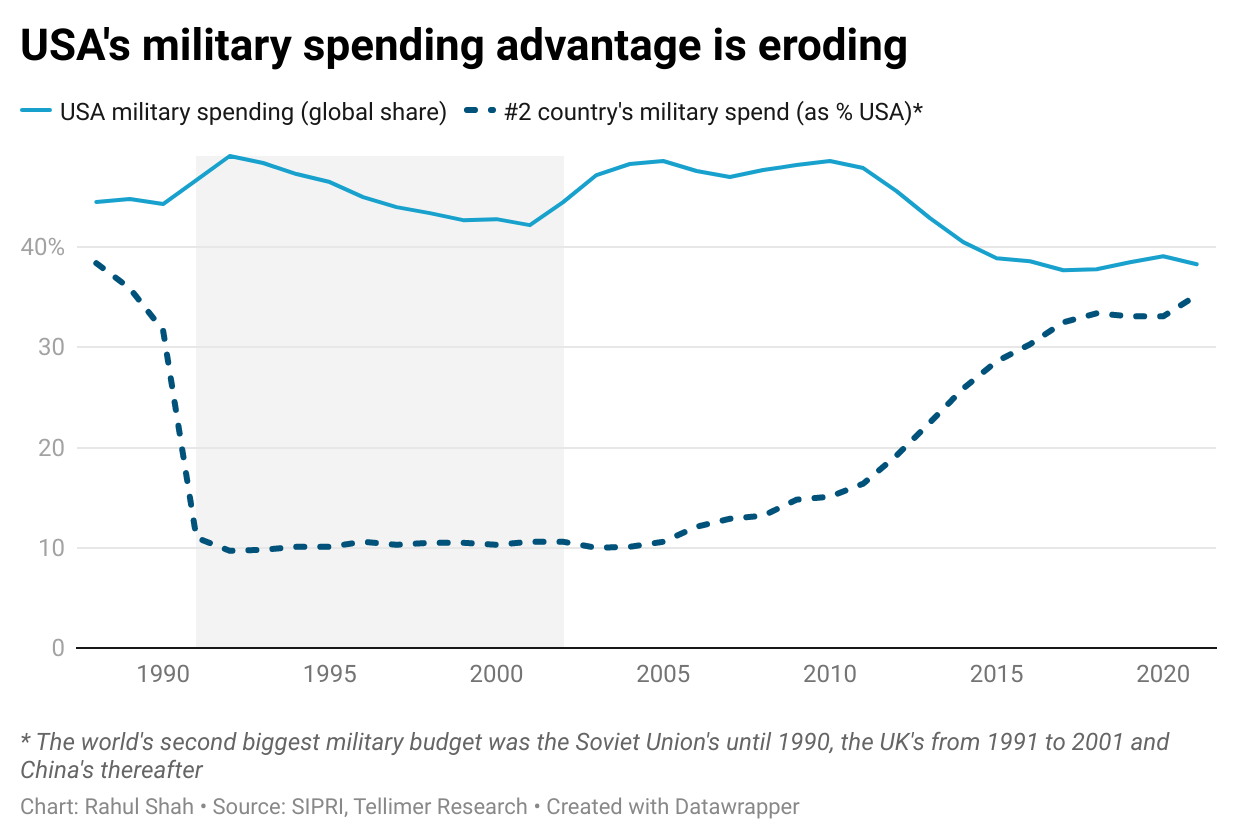 The upshot has been more belligerent military activity, notably by China, Russia, Iran and North Korea, which in turn has forced US allies to respond. GCC countries are among the highest-spending nations (typically, 3.5% to 7.5% of GDP). And European NATO countries are belatedly signing up to the price of their membership; so far, less than half of its members are achieving the 2% of GDP military spending target. Asian allies of the US (notably Japan) also seem keen to spend more. 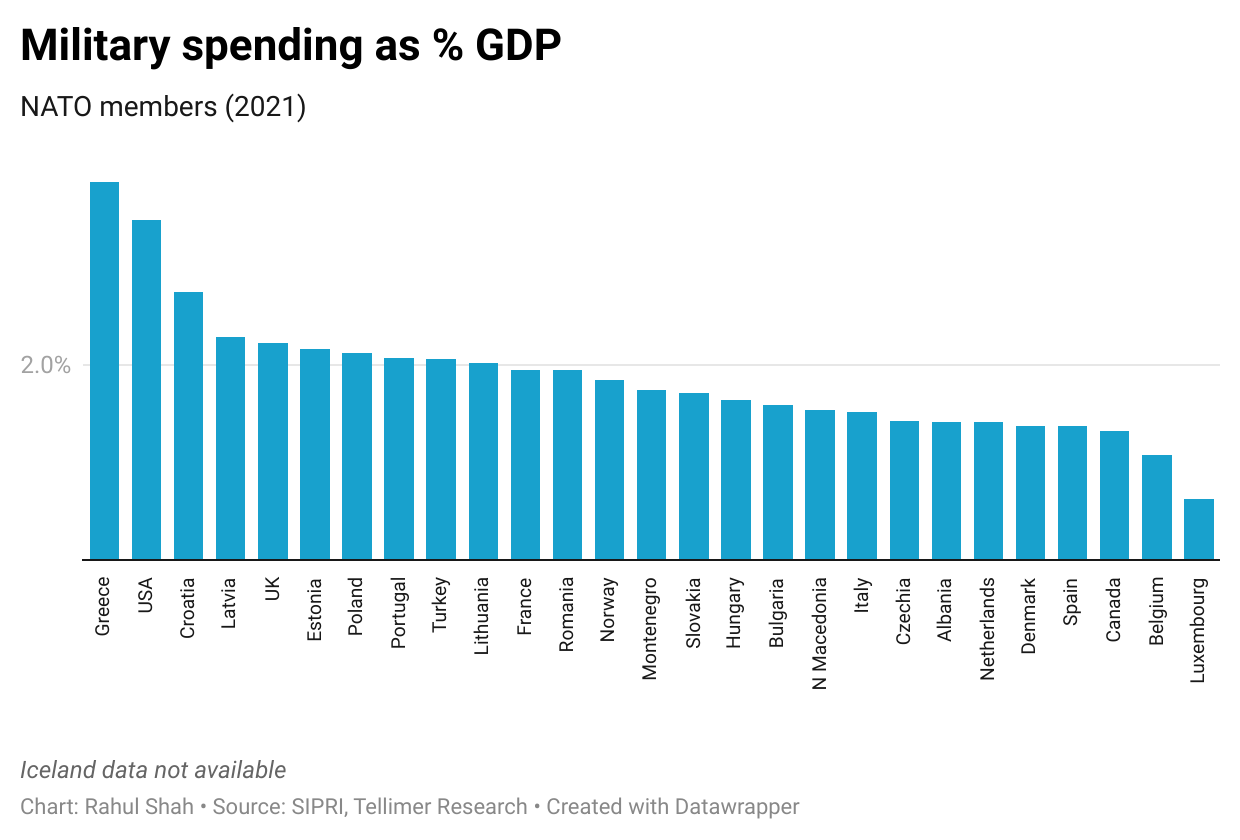 Although we would, of course, prefer governments to prioritise spending on education or health care, this is an unrealistic expectation in an increasingly multipolar and unpredictable world. And, as our initial chart shows, military spending has significant headroom relative to the past. Even at today’s depressed levels, military spending tops US$2tn globally, equivalent to the GDP of Brazil or Italy. Moreover, military spending has strong defensive characteristics, which is pertinent in the current macro context.

We have looked at 49 listed emerging market defense companies with market capitalisations above US$1bn; 34 of these are Chinese firms.

As the tables below highlight, investors have already cottoned on to the strong potential of the sector; the shares trade at higher valuation multiples than the broader market. But, if military spending were to return to more normal (ie pre-1990) levels, the growth potential of some of these firms could be substantial.

Investment opportunities outside China can be found in Russia, India, Brazil, Turkey and the UAE. 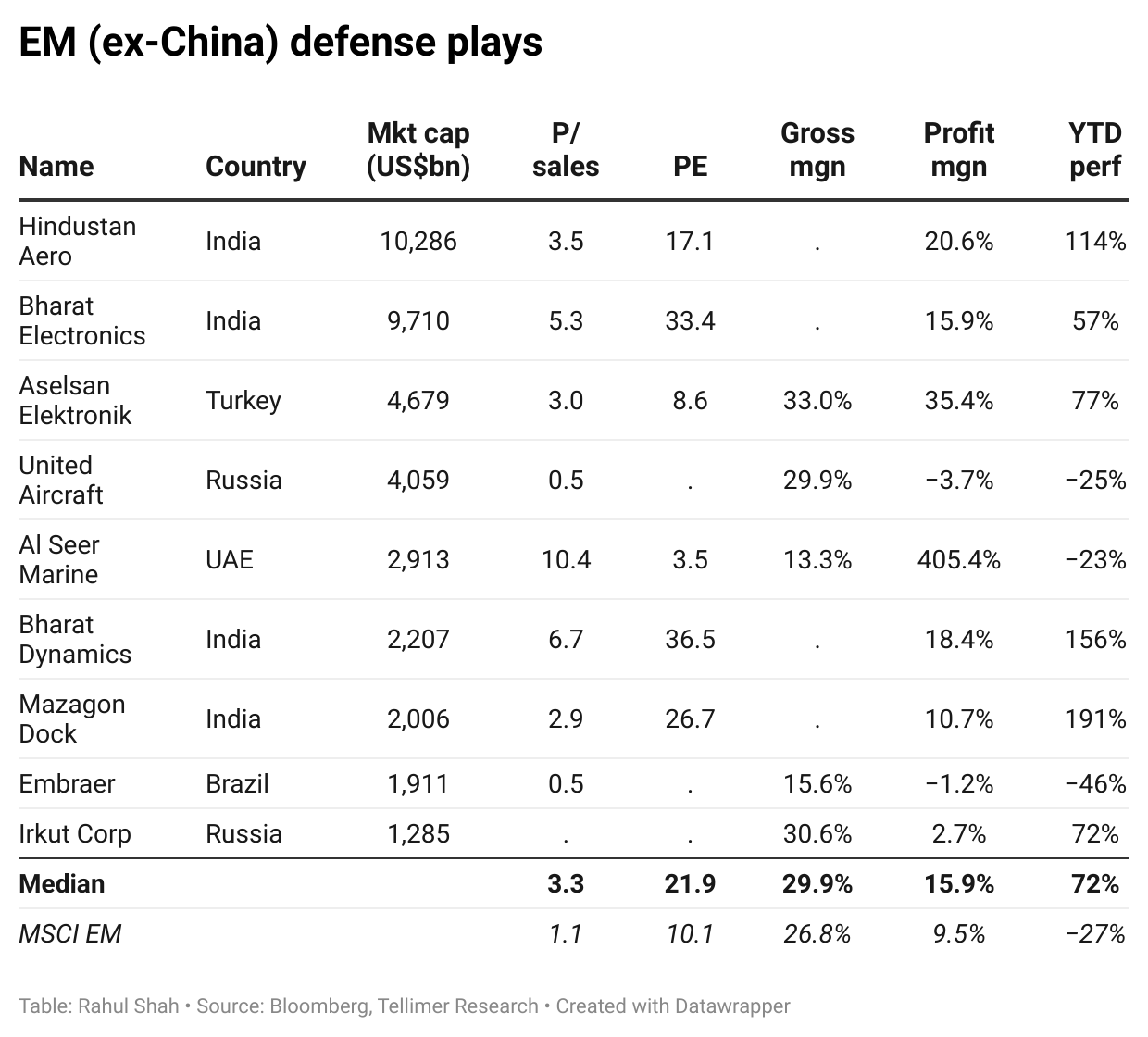 In China, we highlight the 10 investable names covering a broad swathe of activities, from advanced materials to defence, aerospace and industrial machinery. 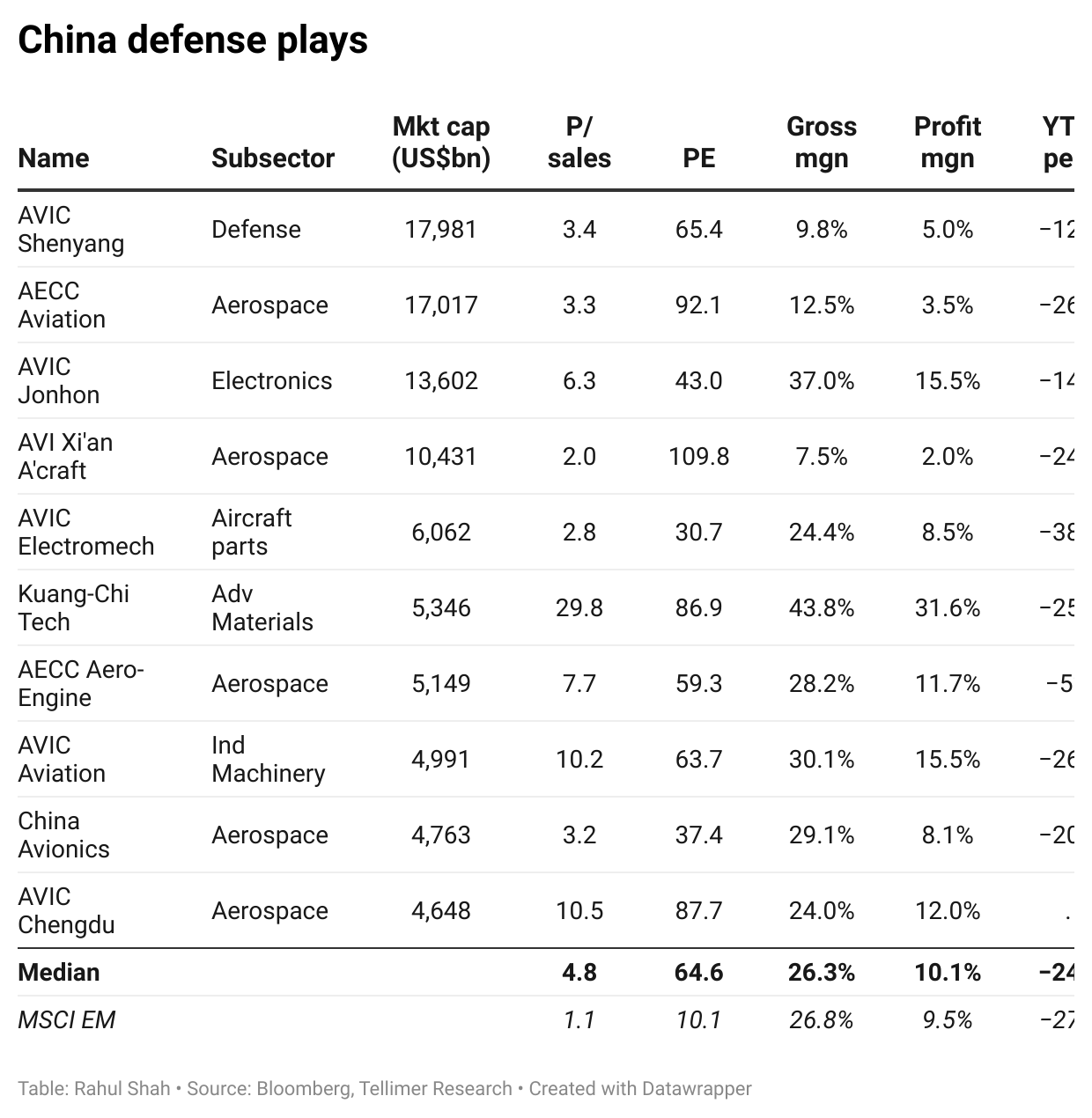 Note that some of the names highlighted above are subject to sanctions.