The IMF/World Bank Annual Meetings resume properly, in person, next week after a three-year hiatus, and Tellimer will be attending (see our schedule below). "IRL", as the cool people say.

Although we're delighted to return to some kind of normal, being regular visitors in the past, the mood is likely to be sombre (especially among EM fixed income investors, down over 20% this year). For, just as the world was recovering from the pandemic, along came Russia's senseless invasion of Ukraine, accentuating the post-pandemic inflation shock and adding to global uncertainty. This has forced a more aggressive round of global central bank monetary tightening and led to a sharper slowdown in global growth. 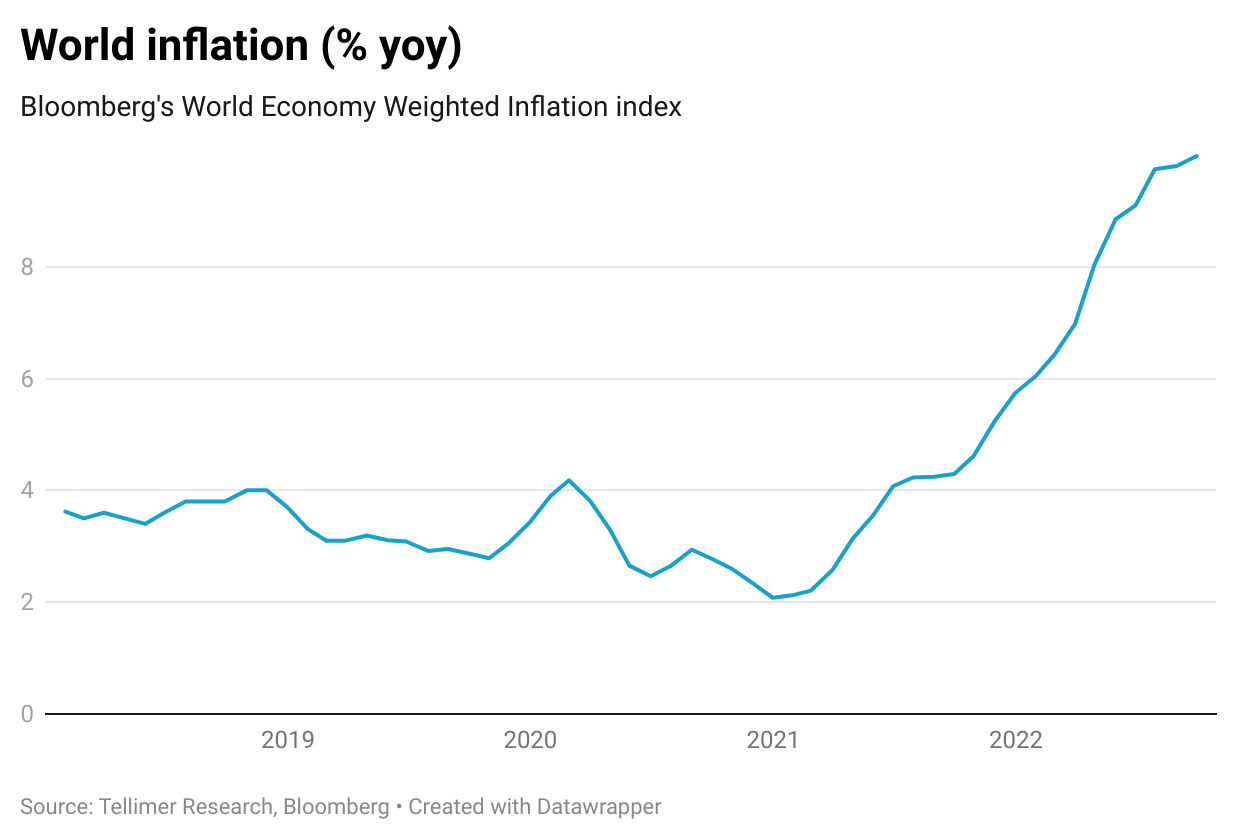 And while this was just as true at the time of the Spring Meetings in April, the war has proven to be longer than expected and its impact more visible. The economic consequences, especially for the world's poorest, continue to reverberate.

Crisis upon crisis, as the IMF headlined its latest Annual Report, with the world economy "facing its biggest test since World War II" while, as the IMF Managing Director Kristalina Georgieva noted in her Annual Meetings' 'curtain-raiser' on 6 October, dealing with shocks is made harder by geopolitical fragmentation.

It is against this backdrop that Georgieva set out the priorities for this year's event – first and foremost, stabilise the economy, and, through transformational reforms, revitalise global cooperation and build resilience.

In our preview report, we therefore highlight five of the key global issues that policymakers and investors gathering next week will want to come to terms with, as well as some important questions for frontier investors that won't be answered.

The extent and duration of the global slowdown will be revealed further in the IMF's forecast update, with the release of the new WEO on 11 October, after Georgieva warned in her curtain-raiser that it will show a further growth downgrade for next year. Moreover, the chance of recession is rising and the risks are skewed to the downside.

Meanwhile, EM growth was revised down only modestly in the July update, by 20bps this year to 3.6% and by 50bps next year to 3.9%. However, weaker growth in the major economies, continued monetary tightening by EM central banks and tighter financing conditions could present downside risks to EM growth. 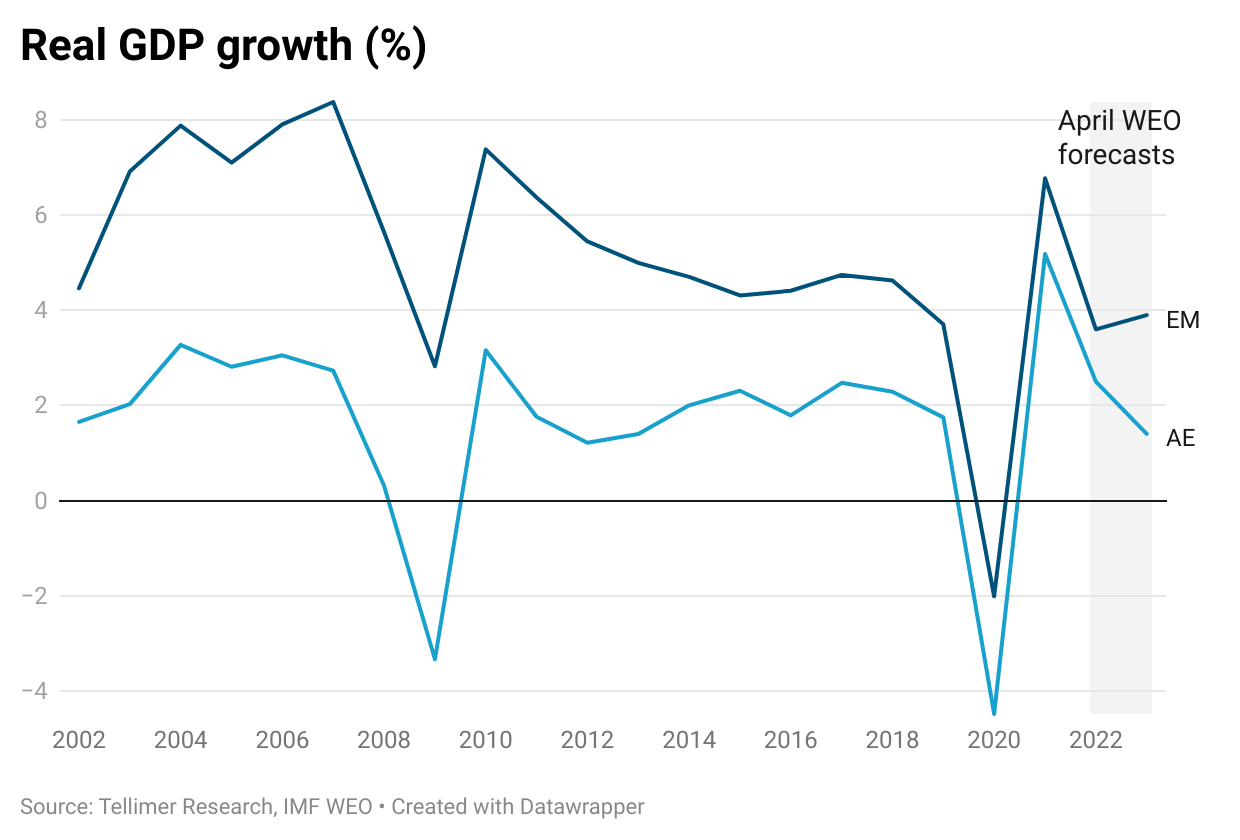 Inflation remains too high in many countries and policymakers 'need to stay the course'. But we recognise the difficult trade-off between not tightening enough, causing inflation to become de-anchored and entrenched, and risking a dangerous wage-price spiral, and doing too much too quickly, pushing economies into recession. With market pricing and forward guidance converging, upside risks to inflation, inflation stickiness and uncertainty over the speed of disinflation pose additional risks and could add to market volatility.

Meanwhile, continued monetary tightening in advanced economies will put additional pressure on EM central banks to follow suit. Dealing with the spillovers could pose problems for some EM policymakers.

The rise in public debt burdens across emerging markets over the past decade is nothing new, and has already curtailed fiscal space for many. But this now takes on extra resonance at a time of additional spending pressures on governments due to higher food and energy prices, and higher interest bills, threatening post-pandemic fiscal consolidation plans, while raising the risk of social tensions. Moreover, borrowing is much less affordable due to higher sovereign borrowing costs.

In addition, with nearly 40% of countries in the index yielding of 10% or more on their sovereign dollar bonds, many smaller EM and frontiers have lost access to the market, raising refinancing risks and the risk of a wave of sovereign debt defaults. 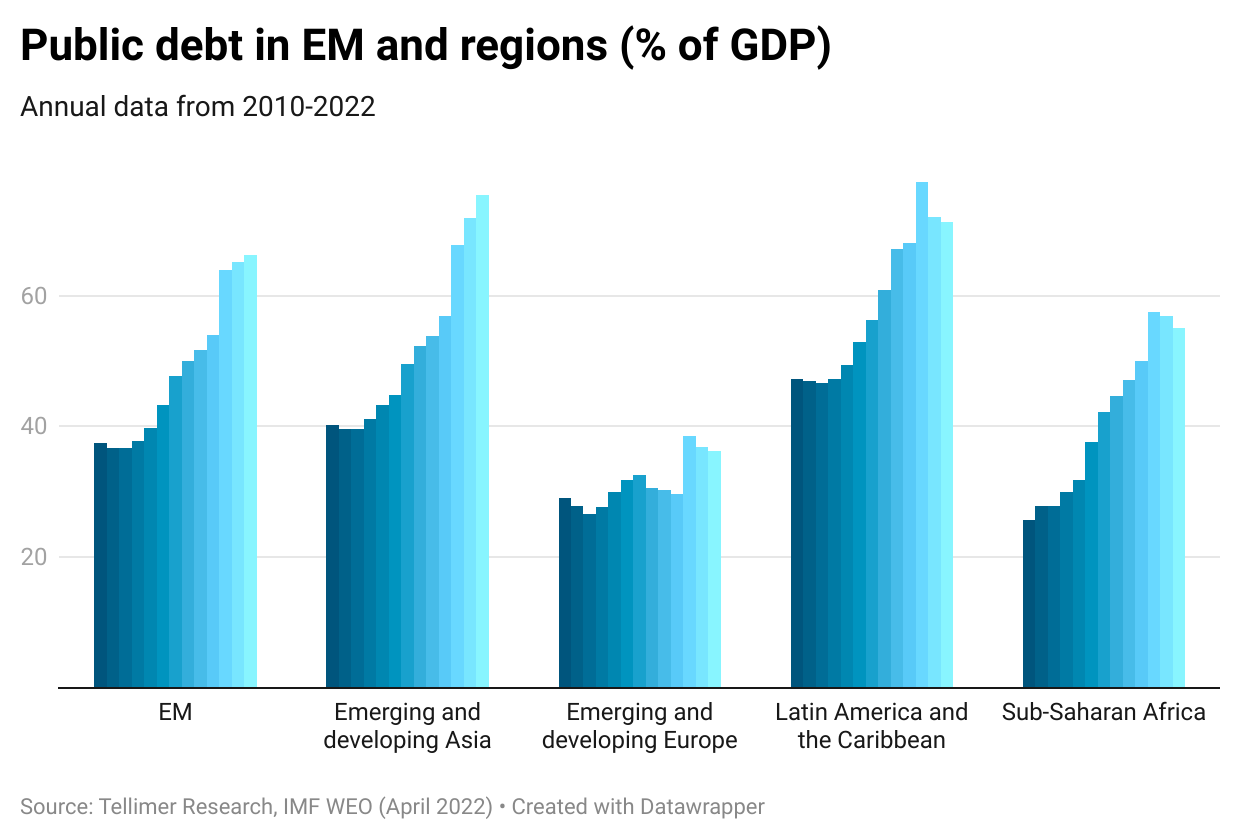 It is well recognised that the Common Framework has got off to a slow start. The IMF should step up calls for improving the workings of the Common Framework and widening its scope, but we'll have to see if the G20 pays more than just lip service. This will dovetail with other policy initiatives afoot to improve the sovereign debt architecture.

Meanwhile, policymakers should resist siren calls for another round of wholesale debt relief, and not seek to blame bondholders for Common Framework failings and the lack of progress so far.

Six countries have received new IMF programmes since the start of the war in Ukraine, excluding Argentina and three flexible credit lines (FCLs) in Latin America, while three have staff-level agreements on a new programme, and four have had programme augmentations.

As the IMF explores how it can do more, another demonstration of the Fund responding to a global need is its new 'food shock window' (FSW), under its emergency lending facilities, which the board approved at the end of September. It is not large (access is capped at 50% of quota), and will probably not register for most investors (although access is subject to debt sustainability), but every little helps for those affected. The IMF notes that 345mn people are now estimated to be affected by food insecurity.

The Fund will also promote its new 'resilience and sustainability facility' (RSF), which provides longer-term concessional financing to help countries build resilience against climate change. Barbados, Costa Rica and Rwanda are set to be among the first countries expected to benefit from this new facility. It will probably not be a big focus for most investors, but it is another signal of policy discipline and strategic vision from those that request it. 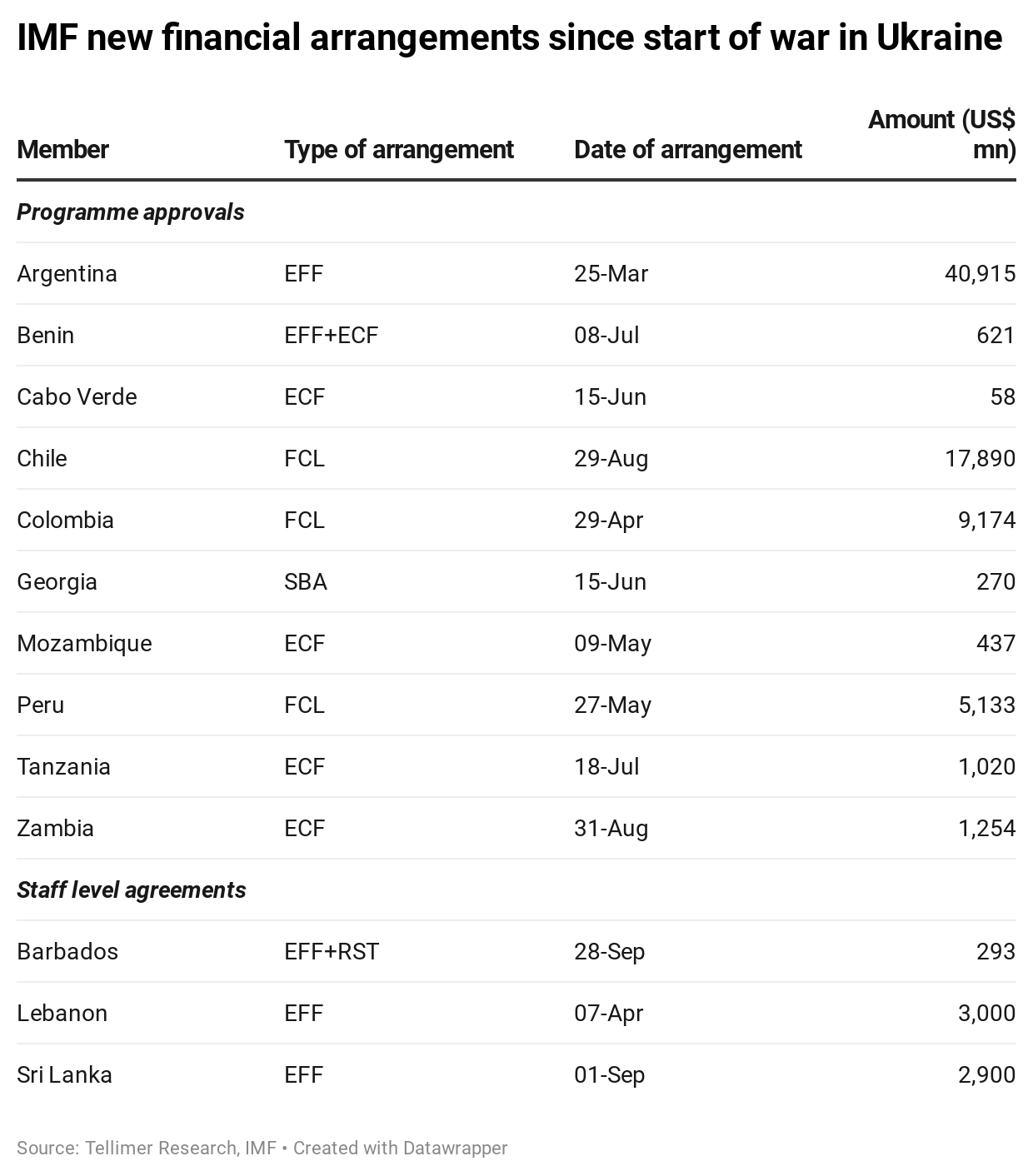 The questions that won't be answered...

That said, we may not learn much more about some of the country-specific issues at the front of the minds of many frontier bond market investors. Most notably, these questions won't be answered next week, although there may be some clues to start piecing the picture together:

Tellimer events at the IMF/WB Meetings

We will be hosting a series of in-person bilateral meetings in Washington next week – with an online option available – with various IMF teams and governments.

If you haven't already, please do submit your meeting request here.