On Friday, Gita Gopinath, the IMF’s Chief Economist, published a blog post highlighting key takeaways from the Fund’s interim June 2020 World Economic Outlook (WEO) release. The latest numbers, in effect, confirm what many have already come to know as true and markets have already priced in, namely that the global recession caused by Covid-19 is likely to be larger and the recovery period slower than originally presented in the April WEO release. The latest figures now predict global GDP to decline by 4.9% in 2020 (compared to 3% in the April release) and the 2021 recovery to post a positive 5.4% increase (compared to 5.8% in April). 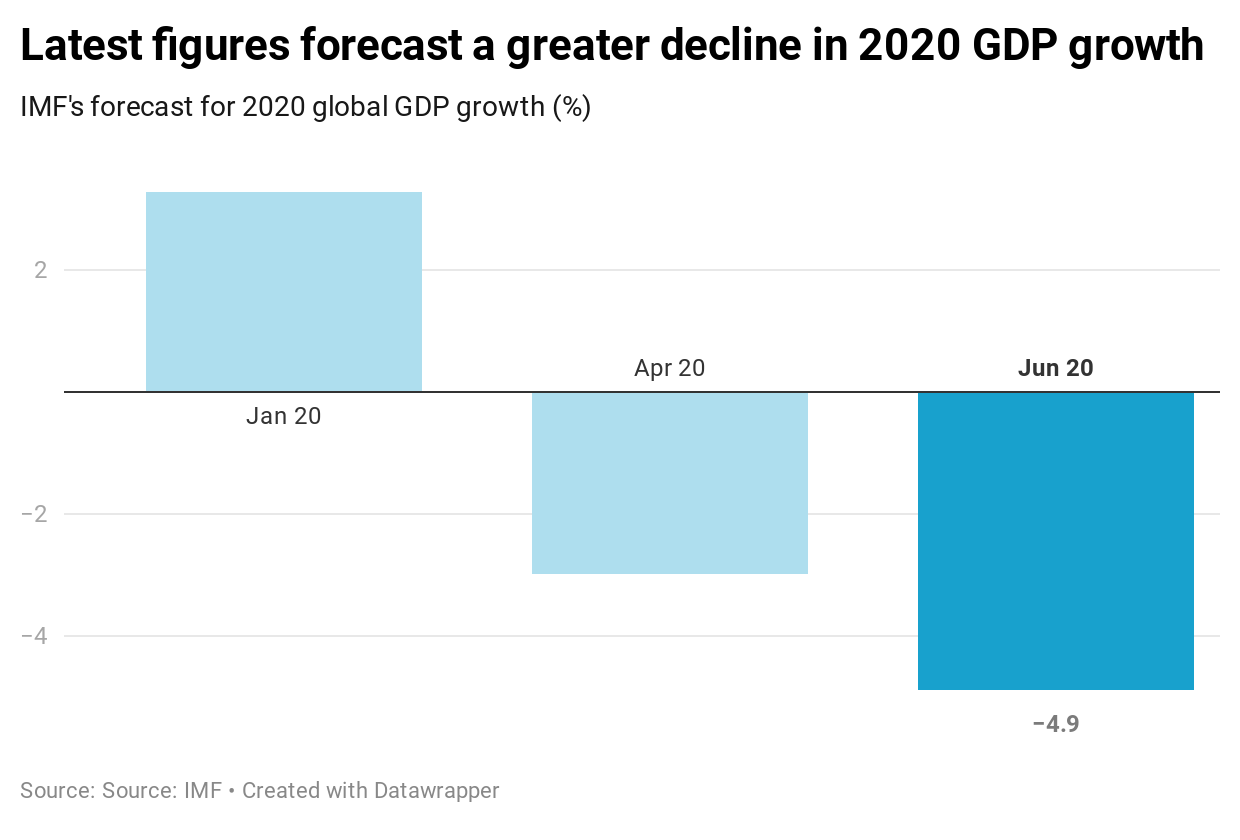 Taking both of these figures into account, the IMF now projects that the deeper 2020 recession, as well as a slower rate of recovery in future periods, will result in a cumulative output loss of US$12.5 trillion compared to US$9 trillion in April over the 2020-21 period). 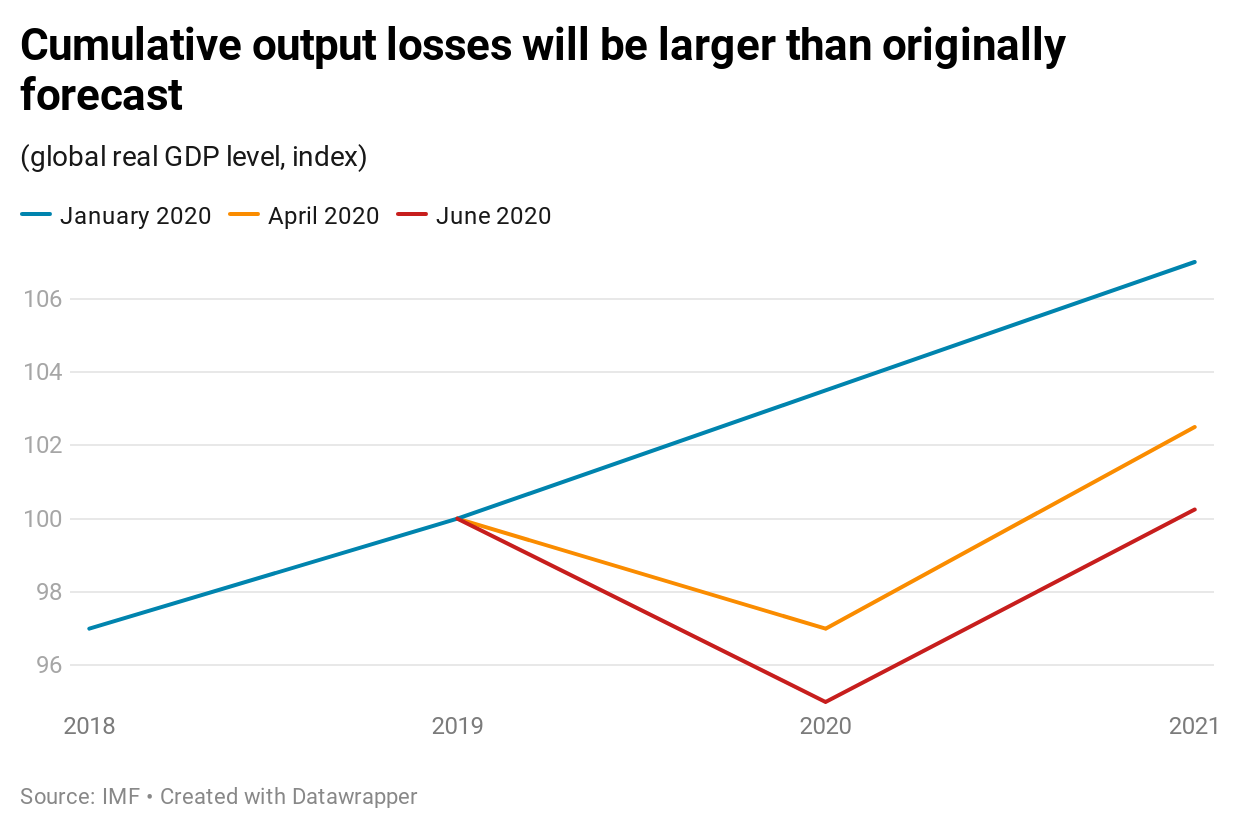 High levels of uncertainty continue to plague forecasts. Ms Gopinath highlights the fact that although the path of growth has worsened relative to prior forecasts, there are also higher levels of uncertainty (i.e. the width of the band) relative to prior periods. She notes that a “high degree of uncertainty surrounds this forecast, with both upside and downside risks to the outlook. On the upside, better news on vaccines and treatments, and additional policy support can lead to a quicker resumption of economic activity. On the downside, further waves of infections can reverse increased mobility and spending, and rapidly tighten financial conditions, triggering debt distress.”

While the initial takeaway is clearly still negative, the increased input-sensitivity of the latest figures could result in an unexpected upside scenario in future periods if there are any upward revisions of the Fund’s baseline assumptions.

The reality of the current situation, combined with high levels of uncertainty, highlight the desperation that many global policy makers are now faced with in trying to seek a balance between reopening economies (75% of countries are in some form of reopening) in order to avoid additional disruptions to labour markets and aggregate demand shocks, with the reality that daily reported Covid-19 cases are currently at their highest level, reaching nearly 300k new daily cases during July (c25% of these cases being the United States alone).

Daily reported Covid-19 cases are currently at their highest level 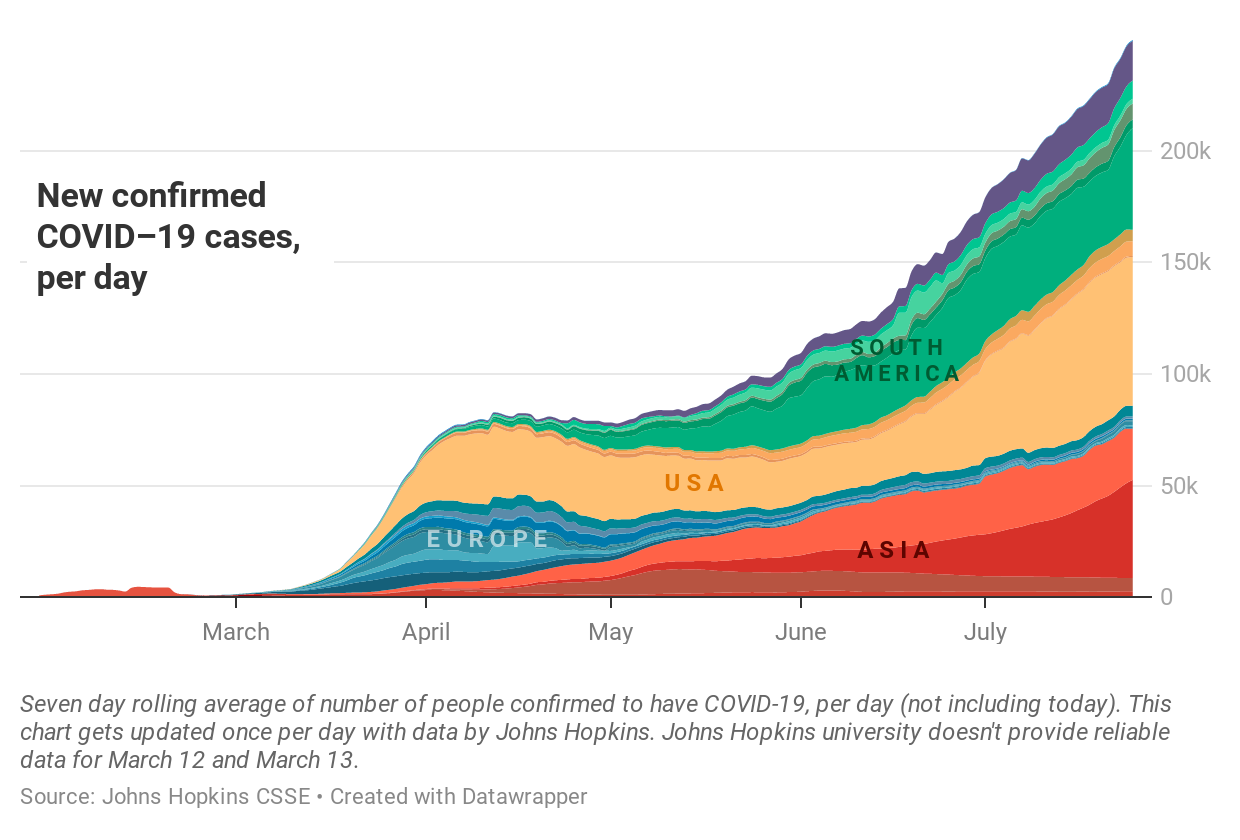 The decline in growth will not be felt equally

Ms Gopinath cites evidence to suggest that the recessionary impacts are not likely to be felt equally across the globe, with emerging markets likely being the most affected in a relative sense. Although it is important to note that this is only the case if China is excluded from EMs and the latest figures are compared to the January forecast. Additionally, this figure is largely driven by a 2021 recovery period that is now faster than initially forecast in Advanced Economies (4.8% vs 4.4%), while that in Emerging Markets has now worsened (5.9% vs 6.6%).

Importantly, the latest release also shows that Low-Income Developing Countries are likely to suffer from a negative 1% growth rate in 2020 compared to a positive 0.4% in April.

Ms Gopinath speaks favourably of both monetary and fiscal stimulus (the latter of which is now in excess of US$10 trillion globally) in response to the global recession, citing that “equity prices have rebounded, credit spreads have narrowed, portfolio flows to emerging market and developing economies have stabilised, and currencies that sharply depreciated have strengthened. By preventing a financial crisis, policy support has helped avert worse real outcomes.” As she rightly points out, these stimulus measures have largely prevented a worse financial crisis from occurring, however, many real sectors are still being ravished by the decline in aggregate demand, workplace restrictions, and labour market frictions tied to long-term unemployment that are likely to result in continued compression of real sectors across the globe. The inevitable result of these factors will include worsened fiscal balances and additional borrowing, leading to an increase in countries’ public debt burden. The sharp rise in debt-to-GDP ratios for both Advanced and Emerging economies is now expected to exceed that reached during the second World War.

Although only discussed in a domestic sense (by calling for strong insolvency frameworks and mechanisms for restructuring and disposing of distressed debt), the result of the aforementioned deterioration in public finance and an increase in debt burden are likely to result in increased cases of distressed debt and default. Following the Fund’s recent change in annual borrowing limits (which we discussed in detail), it should come as no surprise that Ms Gopinath chose to end on a hopeful note, stating that the “IMF will continue to do all it can to ensure adequate international liquidity, provide emergency financing, support the G20 debt service suspension initiative, and provide advice and support to countries during this unprecedented crisis.”