The USD remains the dominant driver of the currency market. Market concerns swung back to inflation and higher rates and helped US bond yields higher. Although lower for the month of May, they did jump on the last trading day of the month. Whether that is just a month-end gyration or something more fundamental and entrenched will become obvious over the coming trading sessions. However, while US Treasury yields rise, the USD will enjoy some added support. The real test may come later this week with Friday's latest US non-farm payroll data release.

US Treasury yields were not the only ones to rise. EZ bond yields rose as well, while UK 10yr gilts rose to their highest levels since July 2015. The point is that yields are heading higher as central banks globally coordinate their efforts to bring inflation back under control. Although they risk tightening too quickly and slow economic growth too aggressively, for now, that is what investors are focusing on, and it has detracted from levels of risk appetite.

Angola: As expected, the Bank of Angola kept its benchmark rate unchanged yesterday at 20%. According to Governor Jose de Lima Massano, “the current course of monetary policy remains adequate to achieve the inflation target.” Note that a rally in the Kwanza has helped to rein in inflation which peaked in January and is expected to slow further. The Kwanza has gained almost 25% against the USD in 2022.

Ghana: Ghana is reportedly seeking to raise up to $2bn in syndicated loans for its budget. Ghana is planning to raise between $500mn and $700mn in terms loans and between $750mn and $1.25bn from development finance institutions and multilateral financial institutions. Central Bank Governor Ernest Addison told reporters that a government plan to borrow up to $2bn "would help improve the supply of foreign exchange into the economy", without providing any details on the plan.

Ethiopia: In a boost for foreign direct investment in Ethiopia, Coca-Cola has opened a $100mn bottling plant outside the capital. The decision to invest deeper in the Ethiopian markets comes just weeks after Moha Soft Drinks Industry S.C, which produces 7 UP, Mirinda, and Pepsi drinks, temporarily halted its operations due to a shortage of foreign currency. Ethiopia is currently facing a severe dollar crunch, weak economic growth, and widespread instability. According to an official from Coke, the plant will employ more than 1000 people and will export some of its production "to generate foreign exchange" and help resolve shortages in the local market. Coca-Cola has a total of five plants in Ethiopia and plans to build another one in the central city Hawassa in the coming years.

Kenya: Inflation in Kenya came in stronger than expected in May, printing at 7.1% y/y from 6.5% y/y in April. This marks the fastest pace of price growth in the economy since February 2020 and surpassed consensus expectations of a less pronounced increase to 6.9% y/y. On a month-on-month basis, consumer prices rose by 0.8%. With inflation nearing the upper band of the Central Bank of Kenya's 2.5-7.5% target range and risks to the outlook tilted to the upside, Monday's 50bps rate hike is well justified.

Kenya: The Kenyan government has floated a KES 75bn ($642.7mn) bond of 18 years to be listed on the Nairobi Securities Exchange (NSE). The Central Bank of Kenya indicated that it is acting as the government's fiscal agent in floating the bond, due to redeem on May 21, 2040, and that proceeds will be used to fund infrastructure projects in 2021/2022 budget estimates. According to the central bank, "the bond will be tax-free, as is the case for infrastructure bonds provided for under the income tax Act." The central bank added that investors are required to place minimum bids of KES 100,000 and warned that defaulters may be suspended from subsequent investment in government securities.

Nigeria: The International Monetary Fund (IMF) has warned that Nigeria could spend almost 100% of its revenue on debt servicing by 2026. According to the IMF, Nigeria currently spends 89% of its revenue on debt, and the figure could continue to rise if nothing is done to curb the country's debt level. The IMF also projected that Nigeria's petrol subsidy payment could reach NGN 6trn by year-end. The projected amount is up by NGN 2trn from the country's earmarked budget for petrol subsidy. The IMF's resident representative in Nigeria said that it was worrisome that as an oil export Nigeria was unable to utilise the current global high oil prices to build reserves. However, the official expressed optimism that Dangote Refinery would reduce fuel importation when completed, thereby reducing the subsidy burden.

Uganda: Headline inflation in Uganda accelerated further in May, coming in at 6.3% y/y from 4.9% y/y in April. This was the fourth straight month that inflation has risen and the fastest pace of price growth in the economy since June 2017. According to the Uganda Bureau of Statistics, food and non-alcoholic beverages, transport, and personal care were the major drivers of the headline inflation figure. At 6.3%, headline inflation is now above the 5% upper limit of the Bank of Uganda target and could see policymakers act to curb price growth at the next meeting.

Central bank efforts to try to halt the sell-off in the Ugandan Shilling yesterday were in vain as the currency plunged to a more than two-year low. The Bank of Uganda intervened through the selling of an undisclosed amount of dollars, but the UGX closed on the back foot on the back of strong demand from importers and interbank players. Yesterday’s plunge saw the UGX record losses of almost 6% in May and rank as the third-worst performing African currency against the USD. Only the Sudanese Pound (-14.05%) and Malawian Kwacha (-20.14%), which was devalued by 25% last Friday, performed worse. 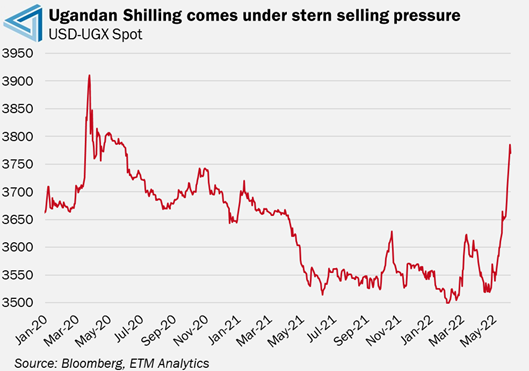 Pulling back the lens, the UGX has lost almost 6% on a year-to-date basis and lags its East African peers against the USD. The currency has weakened on the back of factors such as the negative impact of the war in Ukraine and increased demand for hard currency from the energy sector and food-importing firms. Moreover, deteriorating terms of trade amid a higher import bill due to its dependence on imported oil has added further pressure on the currency.

The UGX is likely to remain under pressure in the near term due to the country's dependence on oil imports and the higher oil price. That said, oil prices have corrected lower this morning, which, together with the central bank measures, could result in a temporary pullback in the USD-UGX today. Increased uncertainty in the financial markets and a tightening of monetary conditions as major DM central bank hike rates could trigger further portfolio outflows from Uganda, which would further detract from the currency. However, Uganda still has a relatively healthy level of reserves, and with the real rate negative now, expectations are that the central bank will tighten its policy rate on Thursday, which could potentially limit the selling pressure.

Notwithstanding the degradation in lending conditions in the international bond market following the hawkish shift from major central banks, Morocco is reportedly considering issuing hard currency bonds later this year. Bloomberg reported, citing an official who asked not to be named, that Morocco may tap the international debt market around the time a previously issued $1.5bn bond matures in December.

Should the Moroccan government go ahead with a Eurobond issuance, it would be the Kingdom’s first issuance abroad since 2020. The government official said that the government isn’t in a rush to issue because higher remittances and earnings from phosphates are easing the impact of pricier food and energy imports on the North African nation’s finances in the short term. 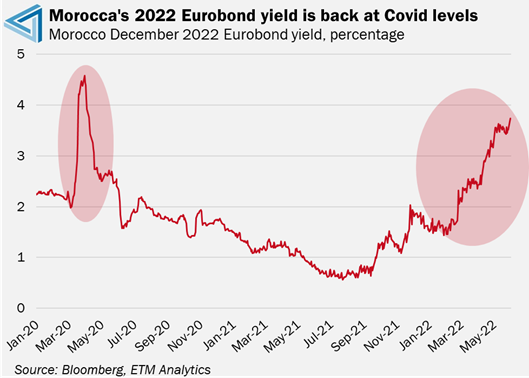 The Finance Ministry didn’t immediately respond to a request by Bloomberg for comment on Tuesday. In our view, given the strong remittance inflows, Morocco’s return to the international debt market will depend on the path of global monetary policy. Should rates in the US continue to rise aggressively and inflation pressures persist into 2023, the Moroccan government will likely raise the required funds from concessional loans. However, should there be a shift in global monetary policy as growth concerns intensify, we see a good chance that the Moroccan government will tap the international bond market towards the backend of this year. The latter is our base case.

Macroeconomic: Zambia’s debt restructuring is yet to be finalised

While there has been some encouraging progress in recent weeks, with China agreeing last month to co-chair Zambia’s official creditor committee with France, Zambia’s debt restructuring is still not a forgone conclusion. Reports have surfaced that China’s lack of experience with tricky debt restructurings and slow coordination among its public lenders is holding up debt relief for Zambia.

Over the past decade, China has become the dominant lender to African countries, extending $160bn in credit since 2000, according to the latest figures from the Boston University’s Africa unit. Chinese officials seem to be wary of moving ahead with Zambia’s debt restructuring as it could set a precedent for other African countries if it accepts losses on loans made to Zambia.

Moreover, a number of sources familiar with the situation have said that China has been hesitant to take part in the G20 multilateral debt process, known as the Common Framework, compared with bilateral negotiations where it can also focus on its broader strategic goals in Africa. Zambia’s case will be watched closely by other countries indebted to China.

While there have been significant delays in the debt restructuring process, the Chinese Foreign Ministry said that it is ready to work with the international community and continue to provide within its capability Zambia with the necessary support to address its current practical difficulties. Zambia’s Finance Minister has stated that the government hopes to conclude the negotiations by the end of June.

Given China’s apprehensive stance on the debt restructuring, we are of the view that this timeline is a bit ambitious and expect that it could still be a few months before a deal with major creditors is concluded. That said, we are optimistic that a deal will be concluded in 2022. Should Zambia’s creditors agree to the debt restructuring, it would unlock a $1.4bn extended credit facility with the International Monetary Fund.