IMF lending since the Ukraine war: Where are we?

Barbados last week became the 13th country that is set to benefit from (or has benefitted from) IMF support since Russia's invasion of Ukraine in February and the mostly indirect impact of subsequent higher food and fuel prices and the concomitant higher global rate outlook arising from the inflation shock.

According to our analysis, the IMF has approved programmes or financing facilities for 10 countries since then, for a combined amount of US$77bn at today's value, and reached staff-level agreement on new facilities for three more, excluding emergency financing under the rapid credit facility (RCF) and rapid financing instrument (RFI) facilities, eg for Ukraine and Tonga. 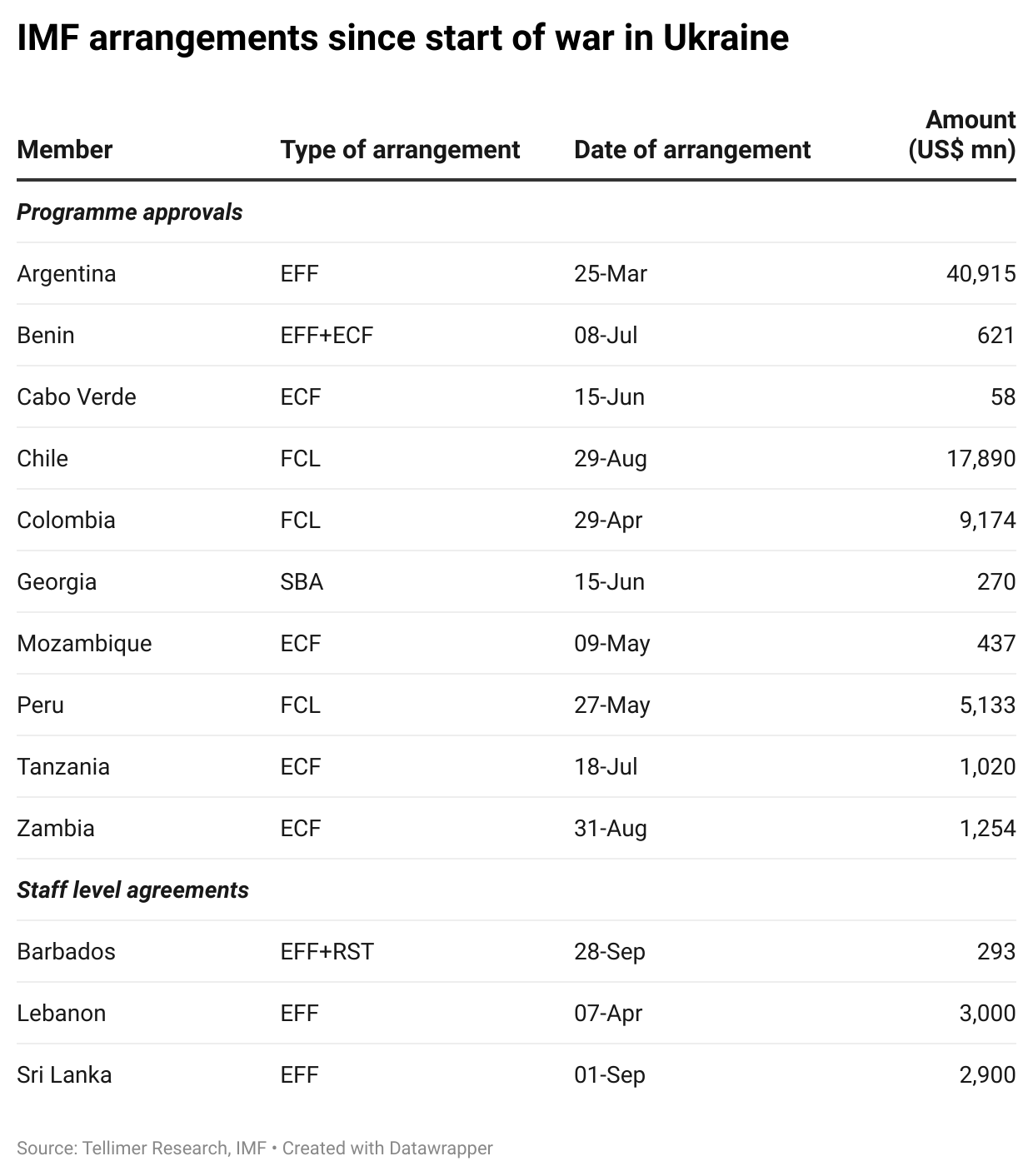 But things are never that simple. Although welcome, we think this exaggerates the extent of IMF support due to this shock, in the same way we observed during the pandemic:

This really leaves only two countries as having new (additional) IMF programmes since then (Cape Verde and Tanzania) – we might have expected many more. Moreover, of these, over half the total amount approved is accounted for by Argentina, and 40% for the FCL countries.

In addition, of the three staff-level agreements, Barbados being the most recent, along with Sri Lanka and Lebanon, Lebanon's need long pre-dates the war following its default in 2020 and a new programme was expected anyway, too (although it may take longer to convert this into an actual programme). Sri Lanka may be one country that could more accurately be described as a casualty of the deterioration in the external environment due to the war, along with Egypt and Tunisia (see below), but, even then, its crisis was brewing long before the war and its subsequent default. Barbados's request for IMF support may also follow more directly as a result of the impact of the war, especially after its previous arrangement expired in June, but we suspect another motivation was to access resilience and sustainability trust (RST) funding which can only be done through a concurrent arrangement.

That said, looking ahead, the number of countries benefitting from IMF help is expected to increase further. We think there are at least another eight countries that currently don't have a programme but that are in discussions with the Fund, at varying stages of advance, on a new one or some kind of support – although again, it is questionable the extent to which these are due to the deterioration in the external environment due to the war or rather reflective of pre-existing vulnerabilities. These are Egypt, Ghana, Malawi, Serbia, Tunisia, possibly Honduras and North Macedonia – although its request for a precautionary and liquidity line (PLL) in April has gone quiet – as well as Ukraine itself. Ukraine is obviously a direct casualty; it already had a Fund programme at the time, but this is now defunct and the authorities are seeking a new one, while, in the meantime, the Fund approved an emergency disbursement of US$1.4bn under the RFI in March. In addition, some programmes are coming to an end this year so authorities might seek successor arrangements – including Ecuador's extended fund facility (EFF) and Senegal's joint stand-by arrangement (SBA)/stand-by credit facility (SCF), while Armenia's SBA expired in April and Angola's EFF finished last December. Meanwhile, Ethiopia – which technically still currently has a programme (its EFF expires in December) – is seeking a new one in support of its Common Framework debt treatment.

In fact, as an indication of the possible call on the Fund, the IMF noted last month that 16 countries had made 20 requests for financing since the war in Ukraine, amounting to a total of US$87bn.

On the contrary, we are surprised there have not been even more programme requests, or augmentations of existing arrangements (like Moldova did at an early stage and Pakistan also did recently), given the sharp deterioration in external conditions this year, particularly for frontiers and low income countries. As we've noted before, nearly 40% of the index (Bloomberg EM Sovereign USD), by number of country constituents, has lost access to the market, and these are mainly high-yield frontier or low income countries, putting additional pressure on their external funding requirements. That said, 42 countries (including the 10 we note above) presently have some form of IMF financing arrangement – that's 22% of its 190 members.

It may, however, be that others have been deterred from going to the Fund for help because it is seen as a sign of weakness, or because of concerns over the associated policy conditionality, implications of any updated debt sustainability assessment, or domestic political factors. Or perhaps some countries are trying to wait it out, hoping things will improve. Or, of course, more are speaking to the Fund in private; we just don't know about it.

To reinforce its crisis support, the IMF also announced last week the addition of a new facility to its lending toolkit – its new food shock window under its existing emergency financing instruments (the RCF and RFI). However, eligibility and qualification criteria apply and access will be limited. Countries also need to have sustainable debt. The new window will be open for one year.