IMF implied FX forecasts may be a signal of misalignment

28 May 2021
Published by Tellimer Research

As a matter of policy, the IMF does not publish FX forecasts. However, at irregular intervals, it uses its EBA framework to estimate the “fair value” exchange rate for certain countries, which are aggregated and published annually for a select group of large EMs (see here for our summary of the EBA methodology and latest External Sector Report, released last August).

For smaller EM countries and those without Article IV reports published at regular and timely intervals, investors can be left in the dark about the IMF’s fair-value estimates. But it is always possible to derive “implied FX forecasts” from the IMF WEO to get a sense of which currencies the IMF sees as being most over or undervalued, and the latest WEO was published just last month.

Our methodology is simple: we divide the IMF local currency and US$ nominal GDP forecasts to derive an implied average exchange rate for each forecast year. The “implied forecasts” should of course be taken with a large pinch of salt – they may not necessarily represent the IMF’s views on fair value and could encompass any number of other factors (and these factors could vary by country).

The implied FX forecasts are also subject to change, so can quickly become stale (and, indeed, a month after the release of the WEO, these figures probably already have a pretty limited shelf life). Moreover, the publication timetable of the WEO and date of submission of country forecasts mean their vintage is even older still.

Although exchange rate forecasting is difficult under the best of circumstances, it is especially difficult on a short-term horizon. However, over the long term, we think it is safe to assume that IMF forecasts reflect a convergence towards what the Fund sees as “fair value” for a given currency.

Below, we express the IMF’s implied FX forecasts for 2026 in terms of the annual appreciation (depreciation) required over the next five years to bring the current bilateral spot exchange rate (as of cob on 26 May) in line with the implied 2026 forecast by mid-2026 (forecasts are expressed in terms of the average exchange rate, but, assuming uniform changes, we think using the mid-2026 rate is appropriate). A positive figure means the exchange rate must appreciate to converge with the IMF forecast, while a negative number means it must depreciate: 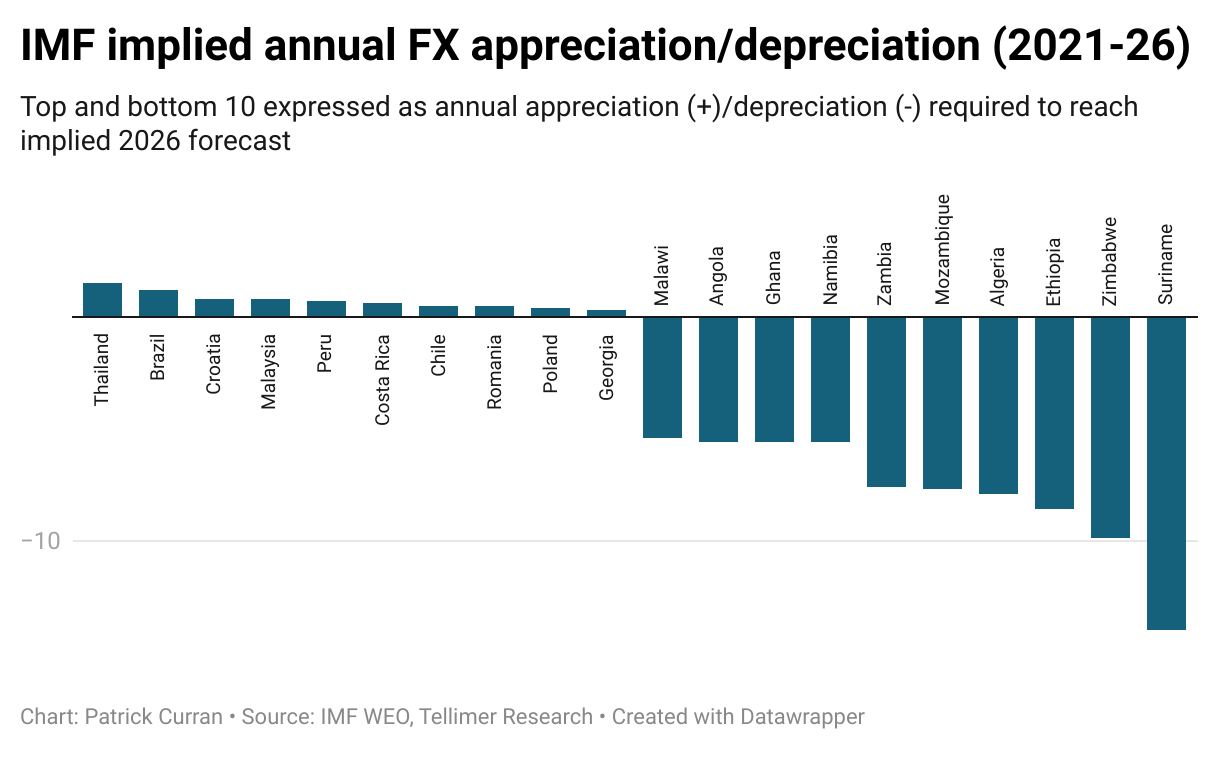 That said, there are many countries that deviate from PPP over the forecast horizon. If we assume that the IMF’s implied 2026 exchange rate forecast reflects a convergence to their estimate of “fair value” (again, this may not be a fair assumption for all countries), then we can assume that currencies that diverge from the PPP-derived fair value estimate are making up for current over or undervaluations.

Below, we present the countries with the largest annual diversion from their PPP-derived rate of appreciation/depreciation (with a positive number pointing to overvaluation and a negative number indicating undervaluation): 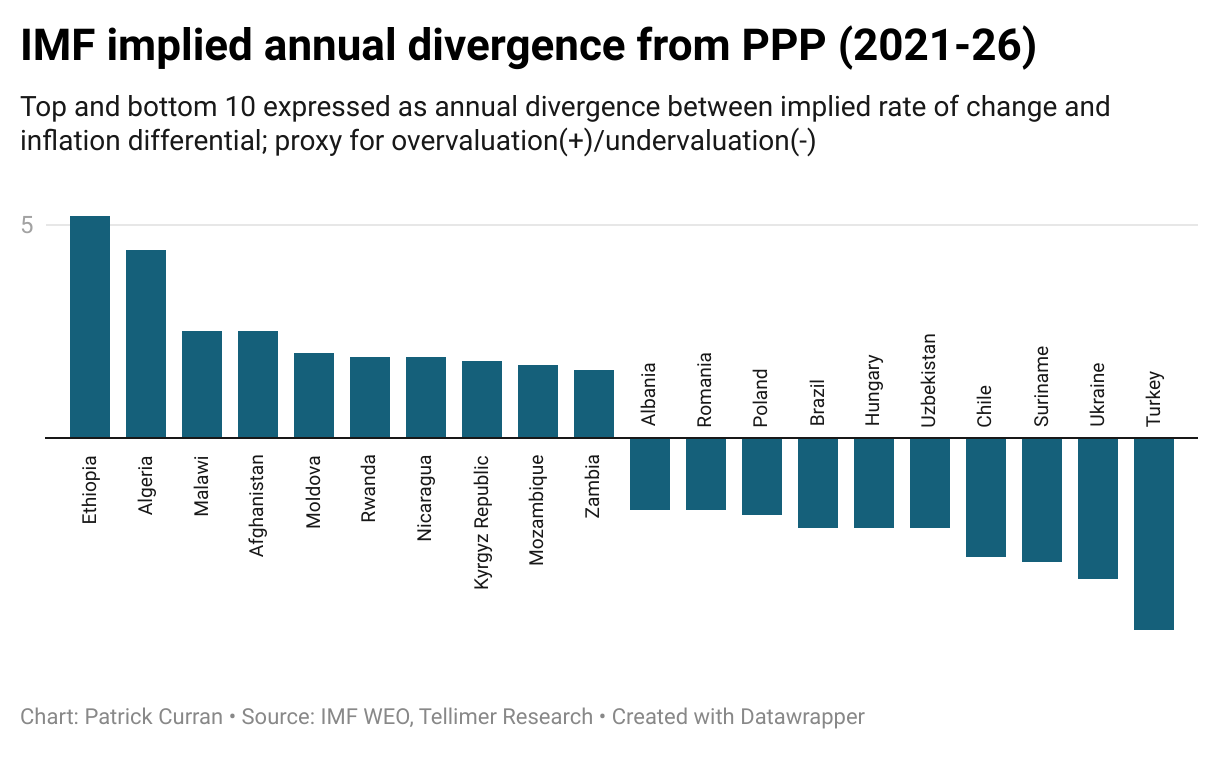 From this perspective, the most overvalued exchange rates are in Ethiopia, Algeria, Malawi, Afghanistan and Moldova, while the most undervalued are in Turkey, Ukraine, Suriname, Chile and Uzbekistan. The results should be viewed with a large pinch of salt, and are subject to numerous caveats (see above, just to name a few). However, we think they represent a quick and dirty way to identify currencies that may have diverged from the IMF’s estimate of fair value for countries that may not be part of the IMF’s annual External Sector Report and/or have not had a recent EBA exchange rate assessment within the context of an Article IV consultation.

It is also worth noting that we have largely excluded countries with pegged exchange rates, as the IMF as a matter of policy will rarely forecast any changes to a pegged exchange rate (for fear of stoking pressure on the peg and turning its breakage into a self-fulfilling prophecy). However, there are two countries (Suriname, for which the IMF forecasts annual depreciation of 14%, and Iran, which we have excluded due to data limitations but for which the IMF forecasts annual depreciation of 20%) for which this generality does not hold, which we take as a clear sign that the IMF does not see their pegs as sustainable. Indeed, Suriname has seen another c3% devaluation this month after last years’ c47% devaluation, and the IMF’s implied forecasts suggest further devaluations are coming (though at a rate less than the inflation differential, suggesting it is not misaligned at the moment).

Again, we urge our readers to take this data with extreme caution. The IMF does not formally forecast exchange rates, and it may not always be accurate to interpret the implied exchange rates from the WEO as their estimate of fair value, for a laundry list of reasons. That said, we think this simple exercise can be used to flag areas for further investigation where more thorough/timely IMF analysis is lacking. 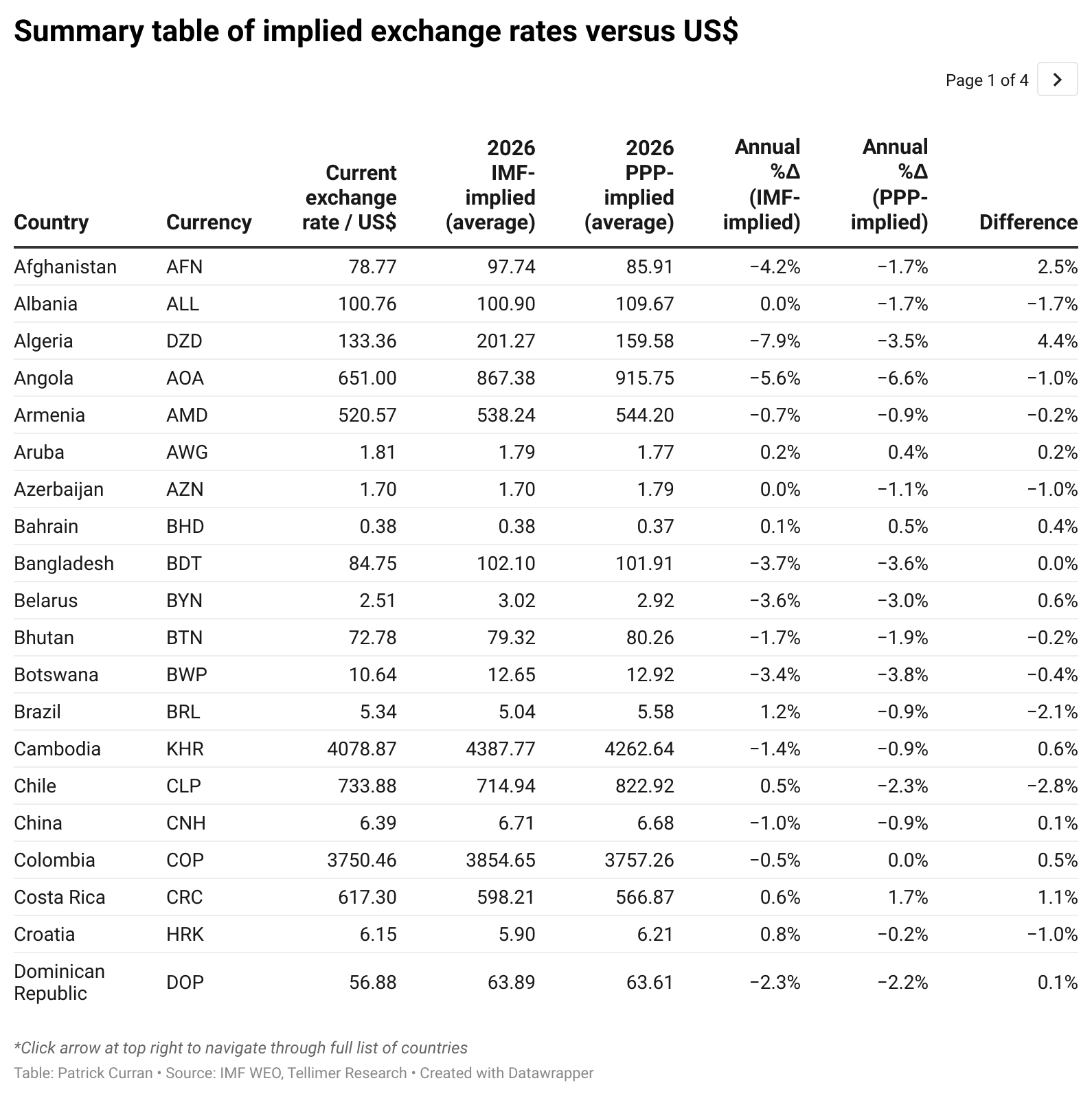