While calculating “fair value” for exchange rates is an inherently difficult exercise, the IMF’s External Balance Assessment (EBA) provides a clear theoretical framework for FX valuation. Once a year it releases a summary of “multilaterally consistent estimates for current account and real exchange rate norms” for 30 systemic global economies, providing a reference point for currency valuations across 17 developed and 13 emerging markets, with its 2022 External Sector Report released on 4 August.

The External Sector Report assesses whether each country’s current account balance is in line with its “equilibrium” level after adjusting for cyclical factors and policy distortions, then derives the extent of real effective exchange rate (REER) appreciation or depreciation needed to return the current account to its equilibrium (see our report from last August for a detailed explanation of the methodology and the IMF EBA webpage for further data, explanations and methodology updates).

As we did last year, we outline some of the most salient points below with the goal of better understanding where major Advanced Economy (AE) and EM currencies may be headed over the medium-term. The report finds that the USD is c17% overvalued and the currencies of 6 of the 13 emerging markets surveyed are undervalued, 6 are fairly valued, and 1 is overvalued.

While this should bode well for EM currencies over the longer term, it may not translate into positive near-term performance, with other factors such as global risk sentiment and the pace and magnitude of the Fed’s hiking cycle playing a more important role in the near term. In following note we provide our key takeaways from the 2022 External Sector Report. 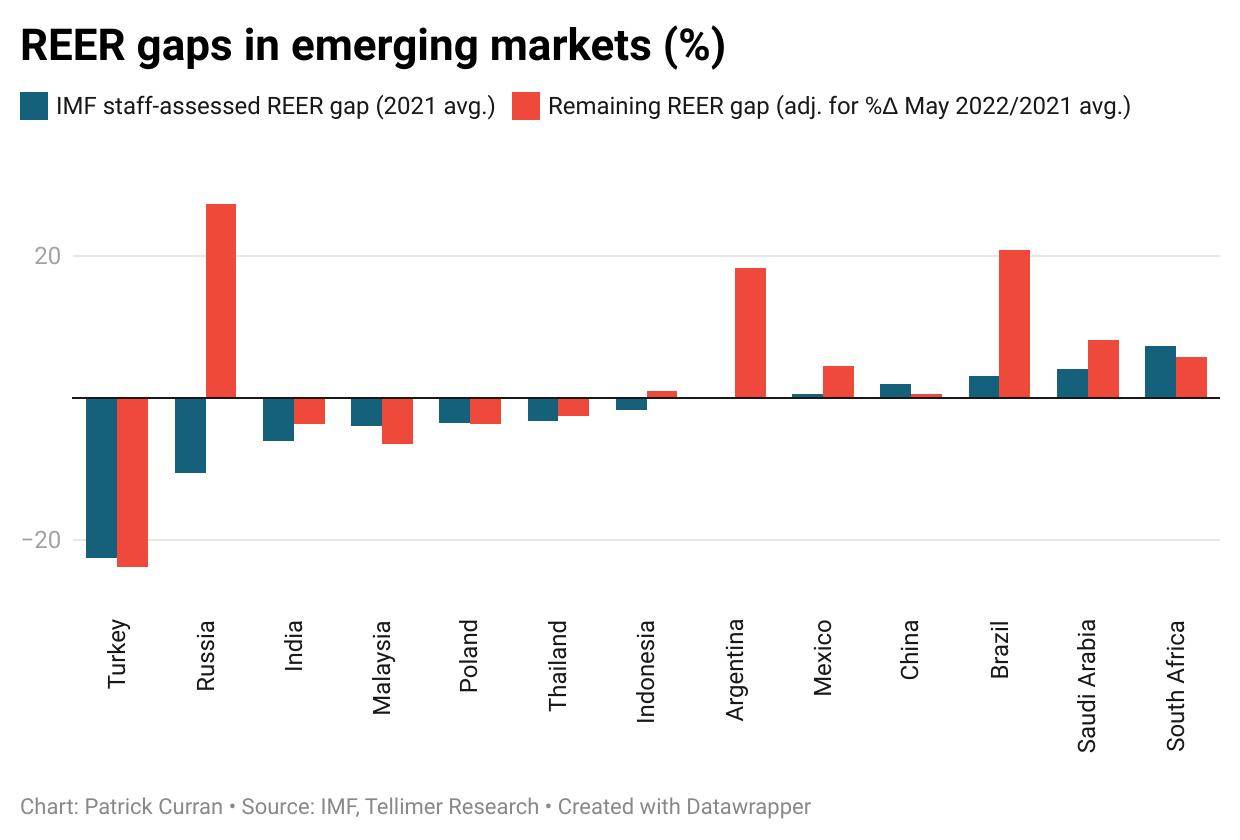 Almost all the excess current account balances stemmed from advanced economies (driven mainly by the US), up from c70% for the advanced economy subset in 2020. Countries with the largest negative current account gaps in 2021 (ie lower surplus or higher deficit than the norm) across the 30-country sample include Belgium, South Africa, Canada and the US. Countries with the largest positive gaps (ie higher surplus or lower deficit than the norm) include Singapore, Germany, Sweden and Australia. 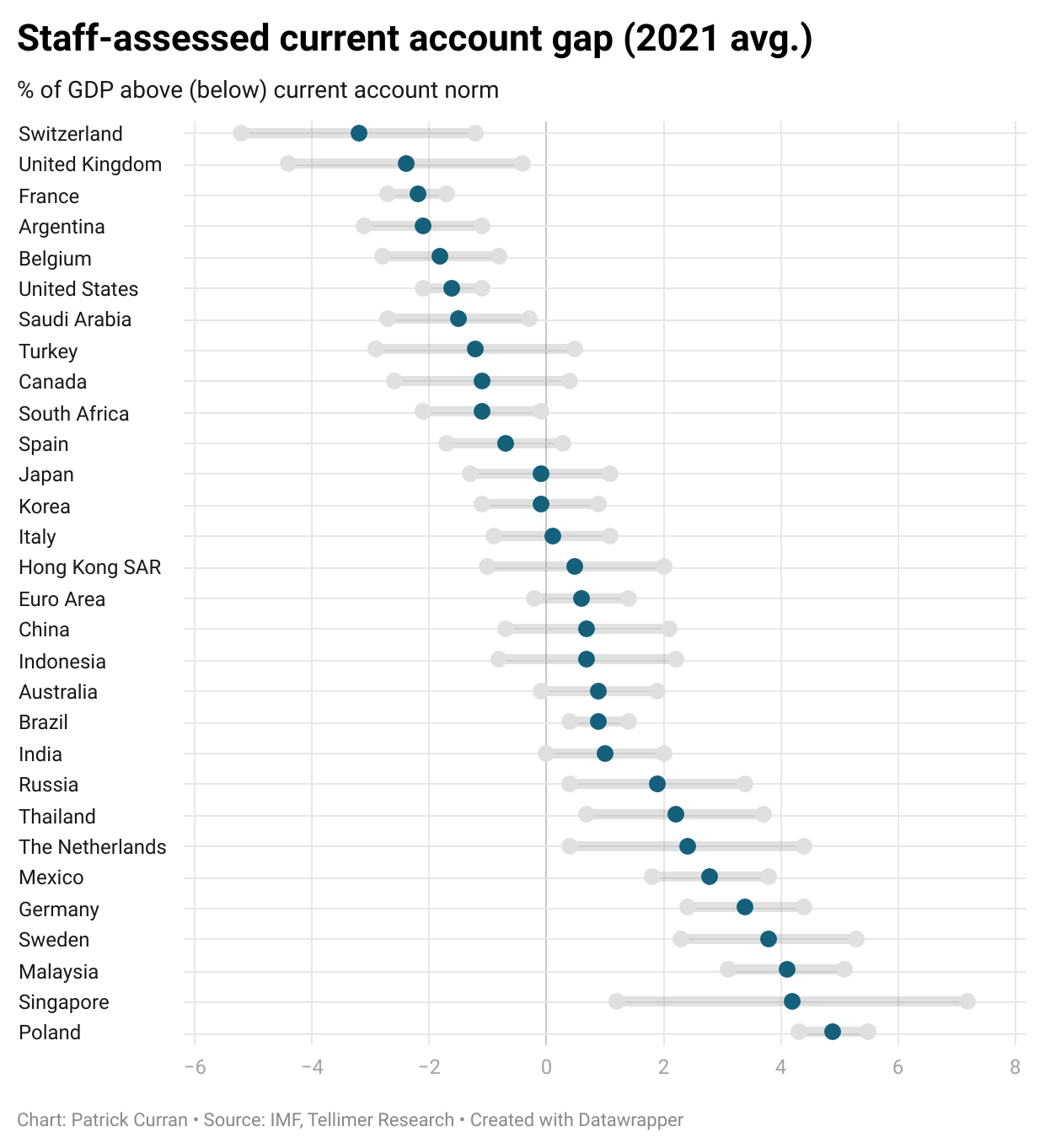 While deviations between each country’s cyclically-adjusted current account and its current account norm are the key driver of the IMF’s exchange rate assessments, it also runs two multivariate REER regression models. Results can differ across the three techniques, with the staff choosing the most appropriate method, or a blend of methods, for each country to arrive at a “fair value” range for each country’s REER, leaving room for qualitative adjustments where necessary. 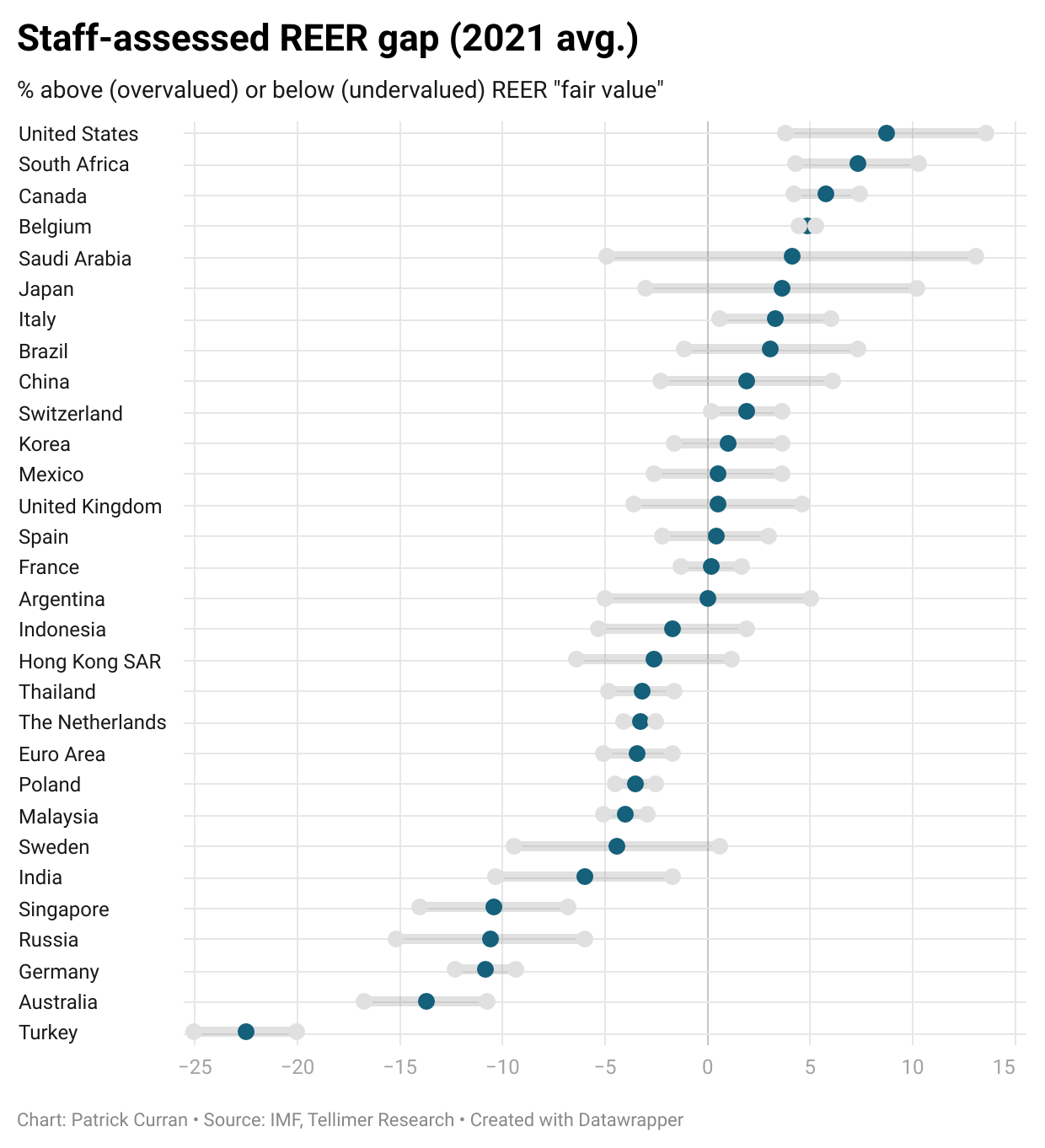 Most EM currencies are fairly or undervalued 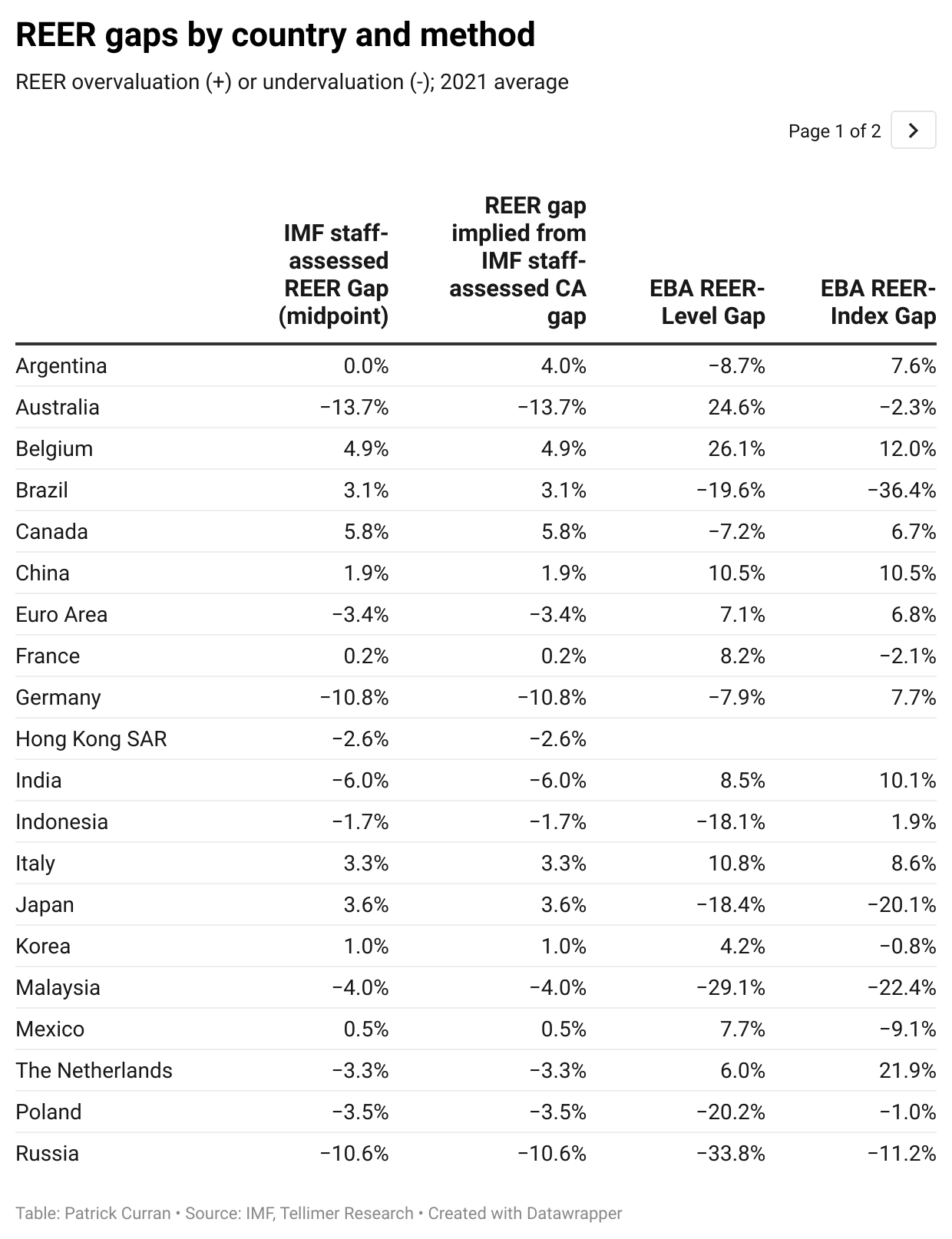 While the REER gaps for most countries are broadly consistent across methodologies, there is a large discrepancy in Turkey (with its cyclically-adjusted current account balance in line with its norm but the REER models pointing to a c40-50% overvaluation). Given significant REER depreciation over the past two years and the lagged impact this is expected to have on the non-energy current account, the IMF staff therefore assessed its REER to be 20-25% undervalued.

Within the 30-country sample, there are 17 advanced economies and 13 emerging markets. We find that the median EM currency in the sample was 1.7% undervalued while the median AE currency was 0.4% overvalued on a REER basis. Within the EM universe, Turkey, Russia, India, Malaysia, Poland and Thailand stand out as having undervalued currencies, while South Africa is the only country flagged as having a materially overvalued currency (eg a point estimate and error band above zero).

However, these assessments are based on the average REER in 2021, and may have shifted since based either on changes to the underlying current account or REER in the months since. Below, we adjust for REER movements over the first five months of the year, which flags the currencies of Russia, Brazil, Argentina and the US as notably overvalued on the back of sharp REER appreciation. Conversely, REER depreciation in Japan, Sweden and the Euro area make their currencies stand out as undervalued, with limited changes elsewhere across the sample. 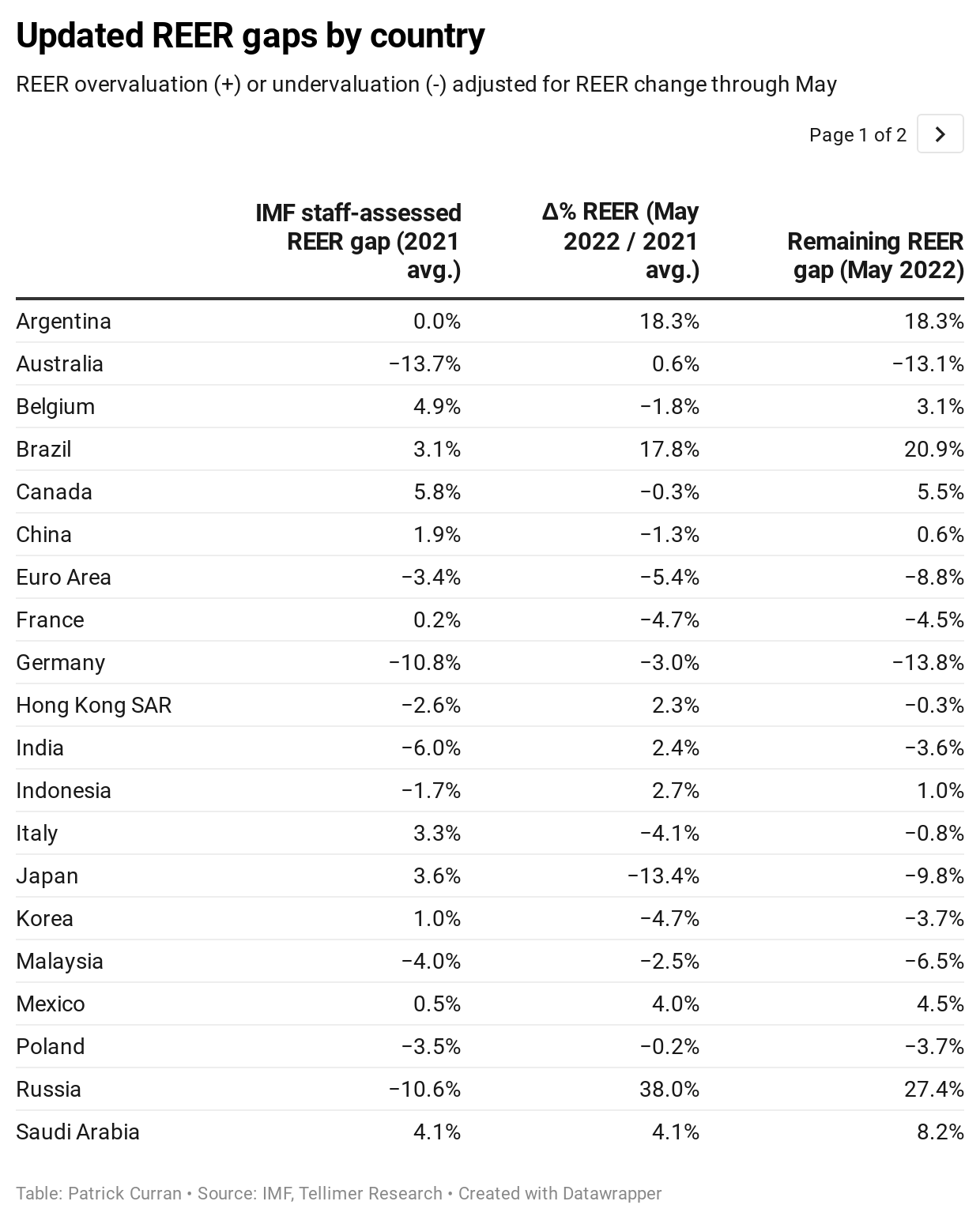 Implications for EMFX in the months ahead

Calculating “fair value” for exchange rates is an inherently difficult exercise, so any estimates should be taken with a heap of salt. That said, the IMF’s annual external sector report provides a clear, “multilaterally consistent” framework for FX valuation, and can thus provide some useful insights into the extent of external imbalances in key advanced and emerging economies and the potential currency adjustments that would be required to restore external balance over a longer-term horizon.

However, exchange rates can deviate from fair value for an extended period of time, so investors should be careful not to connote fair value with an FX forecast. Five of the 10 currencies flagged as more than 5% undervalued in last year’s external sector report depreciated further in REER terms in 2021 relative to the 2020 average, while 3 of the 6 currencies flagged as at least 5% overvalued appreciated further.

As such, despite the US$ being flagged as nearly 9% overvalued in 2021 (and closer to 20% once the REER appreciation in H1 22 is factored in), that does not preclude further US$ strength (and countervailing EM currency weakness). Indeed, the US$ has seen REER appreciation of 7.5% relative to the 2020 average despite the IMF flagging it as being 8.2% overvalued at the time.

While the IMF provides a range of measures in the report to flag which countries might be vulnerable to further US$ appreciation (some of which are summarised below), our external liquidity index provides a thorough assessment of vulnerability across a wider range of emerging and frontier economies. It flags Ethiopia, Tunisia, Egypt, Mongolia, Pakistan, Bolivia and Kenya as the most vulnerable. 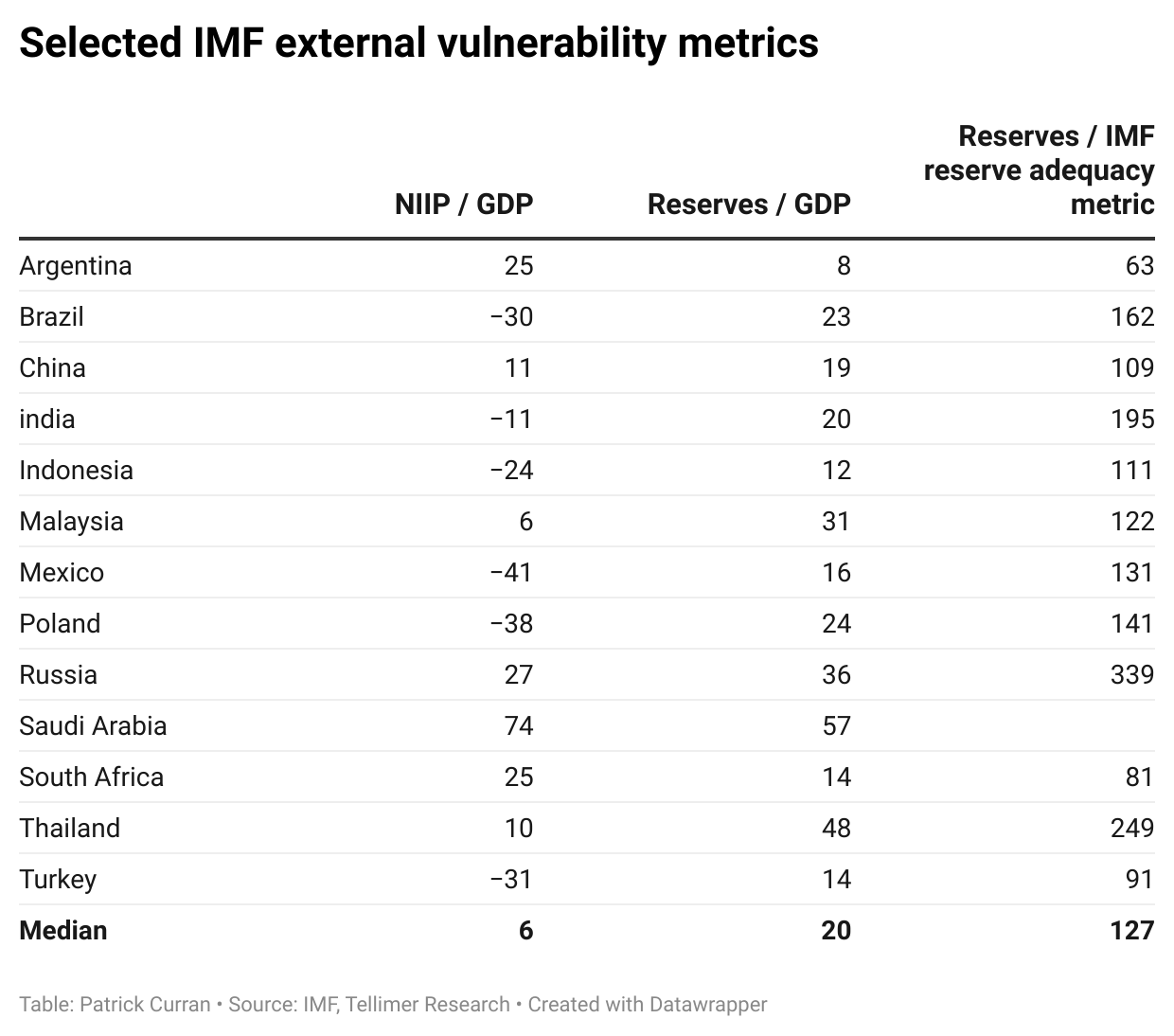 While the IMF's 2022 External Sector Report bolsters our view that the dollar is overvalued and, consequently, many major EM currencies are likely to perform relatively well versus the US$ over the longer-term, EM currencies will likely remain under pressure in the near term as the Fed continues its tightening cycle and slowing global growth raises the risk of recession, and if the improvement in broader risk sentiment seen over the past month reverses then there would likely be a renewed flight to safety (and the US$).

Note: We recommend reading the full external sector report (here) and IMF white paper outlining the revised EBA framework (here) for those interested in the mechanics of FX valuation and the IMF’s external sector framework.

Why emerging market currencies are undervalued, according to the IMF, August 2021