Global bond yields pulled back towards the end of yesterday’s session with gilt yields leading the way. However, bonds were off their best levels as the BoE continues to create volatility in the market, first suggesting that it could extend its bond-buying program past Friday’s original end date before Governor Bailey came out and said otherwise. It will, therefore, be a volatile open this morning for gilt trades given that his comments came after the London market close. USTs ended yesterday off their best levels following Bailey’s comments, while front-end tenors were under a bit of pressure from a weak 3-year auction, which saw the notes awarded at the highest yield since 2007. Meanwhile, bunds rallied and peripheral EU debt weakened amid doubts over Germany’s support for joint EU debt issuance, while JGBs have been flat as there have been no trades for 10yr bonds for three days now, the longest stretch going back to 1999. The volatile open for gilts today may given way to some consolidation over the next two sessions, as traders will be waiting for the US CPI results tomorrow. Although there is the risk that the reading could come out higher than expected, we see the risk as skewed more to the downside for yields given all that is currently priced in. A reading in line with expectations or below will lead to a fairly strong rally for bonds and help alleviate some of the risk-off pressures in the global market.

Ethiopia: Consumer price inflation in Ethiopia slowed further in September, coming in at 30.7% y/y from 32.5% y/y in August. This was the slowest pace of price growth in the economy since August 2021. While inflation in Ethiopia slowed, it is worth noting that risks remain tilted to the upside in the coming months following the decision to hike gasoline prices by almost 20%, a lingering drought, and dollar shortages that have weighed on the local currency.

Kenya: Economic growth in Kenya slowed to 5.2% y/y in Q2 from 6.8% y/y in the prior quarter. While the reading represented the slowest pace of growth since Q1 2021, it bettered Bloomberg consensus expectations of a more pronounced deceleration to 5.0% y/y. That said, it was the fourth straight quarter that growth as slowed as the worst drought in decades, and election-related uncertainty weighed on output. Agriculture, Kenya’s biggest economic sector and employer, contracted for a third quarter, while there was a broad-based loss in momentum in sectors such as accommodation and restaurants, other services, and real estate, partly due to election-related uncertainty.

Egypt: As part of measures to conserve scarce dollars, Egyptian banks have tightened limits on foreign currency withdrawals from local currency accounts. Reports indicate that while no industry-wide rules have been announced, several banks have sent notifications informing clients with Egyptian pound accounts of new monthly limits on how much foreign currency they can withdraw before travelling or when using debit and credit cards abroad. Egypt has been struggling with a shortage of dollars, worsened by the knock-on effects of Russia’s invasion of Ukraine, which has placed pressure on the pound, making it rank among the worst-performing African currencies year-to-date.

Botswana: Yesterday, the USD-BWP wallowed around the 13.3920 mark, with the 13.500 resistance holding firm at present, defying the trend seen across emerging market currencies. As a result, the pair has been unable to gain any real traction this week after printing a new record high last week and the USD maintaining its bid tone, supported by bets for further Federal Reserve monetary tightening and robust haven demand. Investors are bidding their time in the run-up to Friday's domestic inflation figures, which will be this week's major catalyst for the BWP. Meanwhile, the escalation in the Ukraine war is grabbing some headlines again, and a highly uncertain global economic outlook, with the IMF slashing its 2023 growth forecasts, will continue to keep risk appetite at bay. Meanwhile, the BWP-ZAR cross continues to hold a tight and narrow trading range between the 50DMA support at 1.3347 and the ceiling around 1.3650. The underlying bias remains in favour of the upside, which could soon see the 1.3800 mark coming into the crosshairs, last touched in December last year.

Ghana: In another step in the right direction towards securing an International Monetary Fund loan, Ghana has formed a committee to begin talks with its domestic bondholders. According to Ghana’s Ministry of Finance, a five-member committee will work with the financial services industry and other stakeholders to “provide industry-wide inputs and transmit industry concerns on debt management strategy.” The ministry added that “the expectations and goals are to ensure orderliness and confidence in the government’s negotiations with the IMF.” Ghana also plans to undertake a similar engagement with its external bondholders.

Kenya: In what could be the first main-market listings on the Nairobi Securities Exchange, President William Ruto plans to sell as many as ten state-owned firms within 12 months. The sales and a proposal by Ruto to introduce domestic dollar-denominated bonds are part of his plans to diversify fund-raising sources as tightening global financial conditions cause investors to abandon emerging and frontier markets. According to Ruto, the domestic dollar bonds will enable the government to tap into foreign currency sitting in Kenyan bank accounts. Earlier this year, Kenya cancelled a Eurobond issue and a syndicated loan due to unfavorable borrowing costs.

Namibia: Qatar’s Energy Minister has indicated that QatarEnergy aims to accelerate the development of two oil wells it discovered off the Namibian coast with joint venture partners earlier this year. The minister added that drilling work is expected for next year but stopped short of saying when the two oil finds will be brought into production. While the details of the quantities are not yet known, the oil discoveries are likely in the billions of barrels, according to Namibia’s energy minister, and could make Namibia, the southern neighbour of OPEC member Angola, another oil producer along the African Atlantic coast.

African currencies have broadly weakened against the USD this year. When looking at Bloomberg’s basket of 23 African currencies, 17 are in the red on a year-to-date basis. While idiosyncratic challenges have contributed to this weakness, the strength of the dollar has been a major driver. The USD, as measured by the DXY index, has advanced by almost 17% YTD. 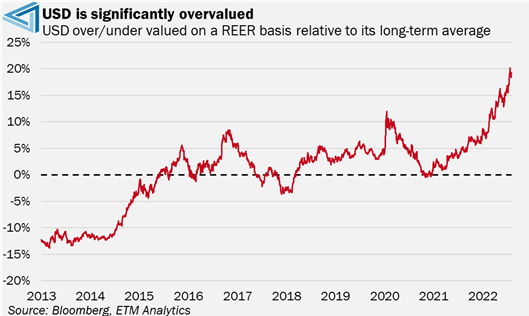 The driving force behind the strength has been the Federal Reserve’s persistent and aggressive monetary policy stance which has resulted in a divergence in monetary policy with other major economies. In addition, financial market volatility and the uncertain geopolitical climate have generated a rotation to safety, and this has translated to an impressive performance by the USD.

Such has been the advance in the USD that it now finds itself in extremely overvalued territory on a real effective exchange rate basis. Internal models point to a USD that is stretched, and the risk of a reversal has risen significantly, especially if US data softens and the Federal Reserve backs down from aggressive rate hikes. Should the Federal Reserve soften its stance, the USD may come under pressure and potentially provide some relief for emerging and frontier market currencies that have broadly weakened. However, currencies in countries without sound fundamentals may be unable to fully capitalize on the unwinding of the USD strength.

Fixed Income: Market implied probability of a default in Ghana has surged in recent months

Higher international interest rates and deterioration in global risk appetite have hit African sovereigns disproportionately. Those countries with significant levels of external debt and a high dependence on raising debt in the international bond market have been hit the hardest. Ghana is undoubtedly the African country that has been hit the hardest by the shift in global monetary policy, with the country effectively being priced out of the international bond market, where it has been funding its budget shortfall and rolling over its debt in recent years. 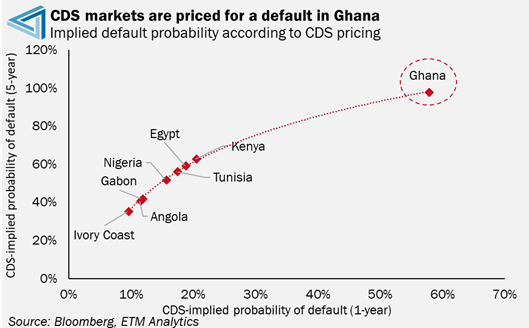 With the country unable to access the international debt market at affordable levels, debt rollover risks have risen sharply. Moreover, the country is facing a currency crisis following the sustained drop in reserves, which is amplifying the country’s debt issues. The extent of Ghana’s fiscal issues is reflected by the blowout in Ghanaian bond yields and the country’s credit default swaps, which is essentially the cost to insure against sovereign default.

The International monetary fund (IMF) released its October World Economic report yesterday. The IMF expects global growth to slow from 6% in 2021 to 3.2% in 2022, marking the weakest growth profile since 2001, excluding the financial crisis and Covid-19. The IMF downwardly revised its 2022 and 2023 Sub-Saharan Africa growth forecasts by -0.2ppts and -0.3ppts to 3.6% and 3.7%, respectively. The IMF expects the Democratic Republic of the Congo (6.1%), Côte d’Ivoire (5.5%) and Kenya (5.3%) to record the strongest GDP growth this year. 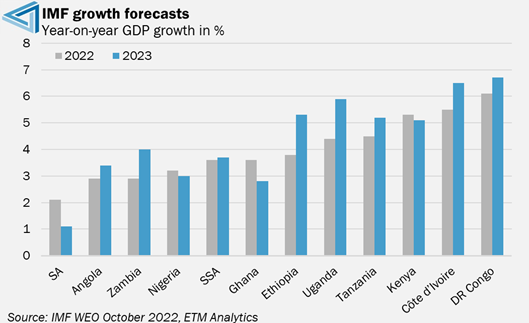 The global economy is going through a turbulent period, partly due to the effects of Covid-19, the Russia-Ukraine war and the aggressive tightening of monetary policy. The factors mentioned above are weighing heavily on the global economic outlook. Global inflation is forecast to rise from 4.7% in 2021 to 8.8% in 2022 and is then expected to decline to 6.5% in 2023. Risks to the inflation outlook remain significant, with food and fuel being the main driver in most economies. For African countries, currency weakness and, in some instances, adverse weather and conflict are contributing to high inflation.

The IMF highlighted that front-loaded and aggressive monetary tightening is critical to avoid inflation de-anchoring as a result of households and businesses basing their wage and price expectations on their recent inflation experience. The IMF also noted that fiscal policy’s priority is the protection of vulnerable groups through targeted near-term support to alleviate the burden of the cost of living crisis felt across the globe. Particularly important for Africa, the IMF said addressing growing government debt distress caused by lower growth and higher borrowing costs requires a meaningful improvement in debt resolution frameworks.