With the IMF/WB Spring Meetings having concluded over the weekend, we look at the total amount of financial assistance provided so far by the IMF, and its composition, since the pandemic began just over a year ago.

According to the IMF Managing Director, in her opening remarks to the Spring Meetings, the Fund has now supported 86 countries with financing of over US$110bn in a variety of instruments since the pandemic (note, we calculate US$110.5bn as of 12 April 2021). Of this, 36 countries are in SSA, 21 in the Western Hemisphere, 13 in the Middle East and Central Asia, 9 in Asia/Pacific, and 7 in Europe. Lending falls into three main categories (excluding debt relief assistance): 1) emergency disbursements under the IMF's RFI/RCF (with little conditionality); 2) programme lending; and 3) credit lines. For details, country by country, see here. 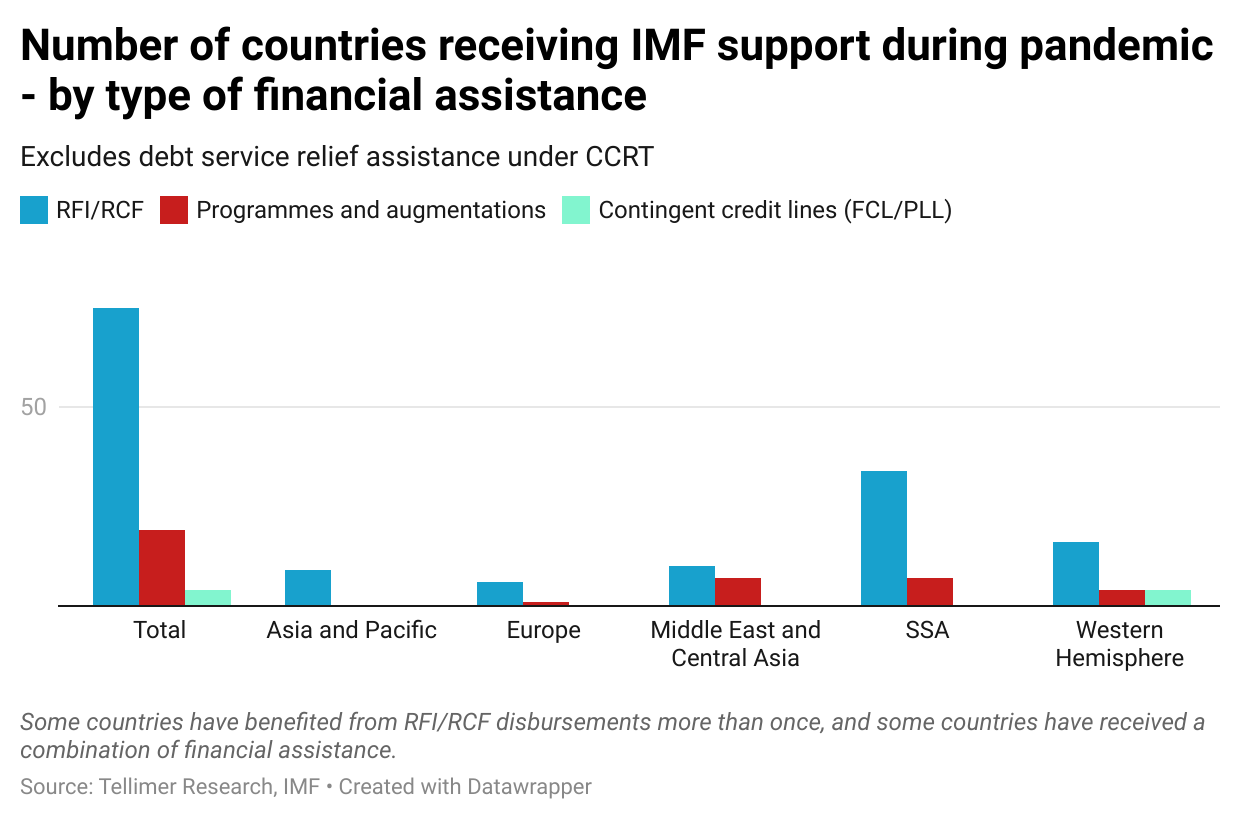 On our count, 75 countries have benefited from emergency disbursements under the IMF's RFI/RCF, totalling US$30.7bn, of which 10 countries have benefited twice. Of the total: 34 countries (nearly half) are in Sub-Saharan Africa, which also accounts for just over half the total disbursed (51%). The Middle East and Central Asia region accounts for 21% of these disbursements, the Western Hemisphere 17%, Asia/Pacific 7% and Europe 4%. Namibia (first timer) and South Sudan (second time) have been the most recent beneficiaries of emergency disbursements, coming at the end of March. For background, see our last IMF tracker here.

Meanwhile, 19 countries have had new IMF programmes or augmentations to their existing programme, some of whom may also have benefited from RFI/RCF disbursements too. 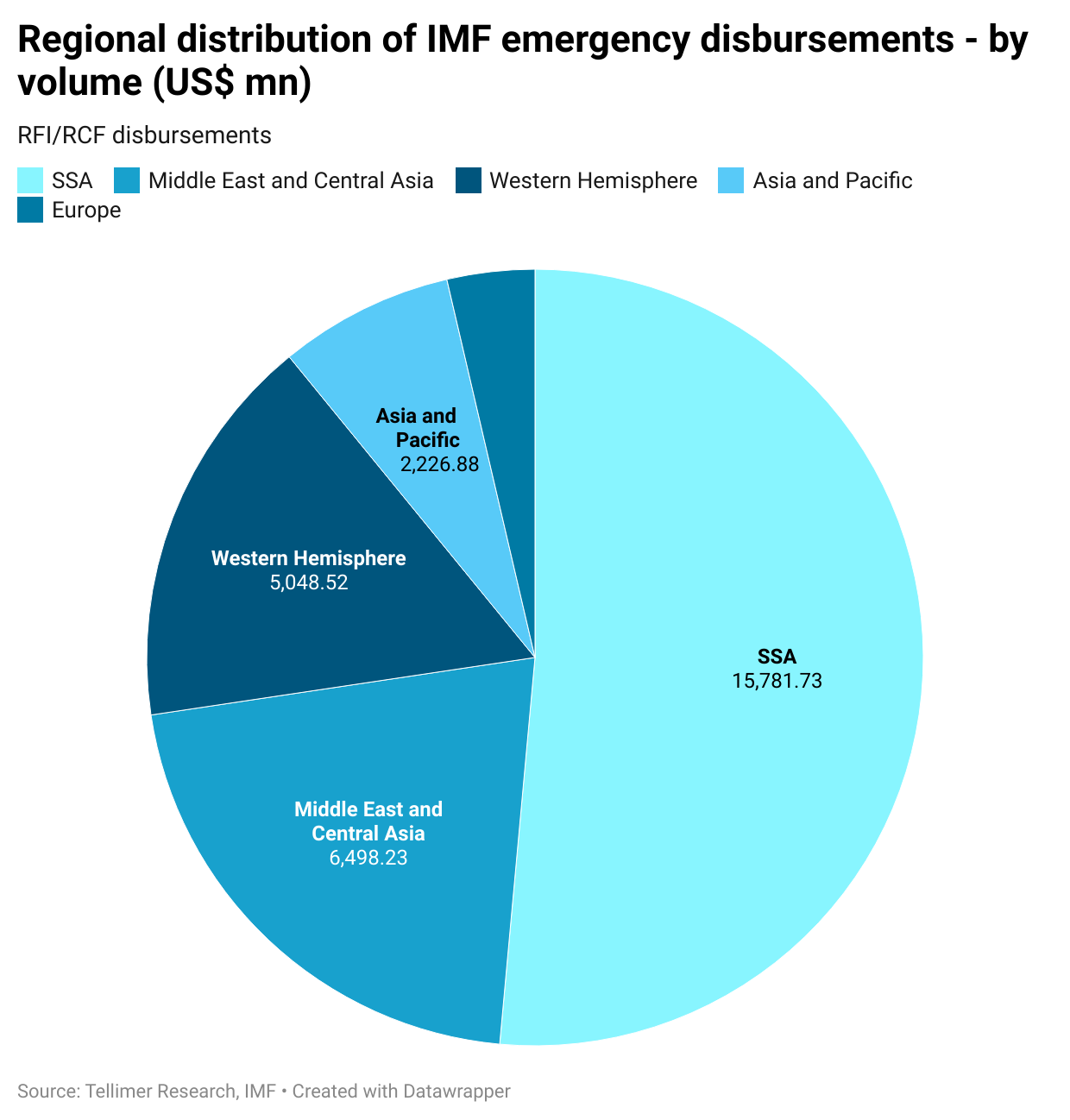 This sounds impressive. And all achieved in about 13 months, when speed was of the essence. The IMF has stepped up and done a good job, when it needed to.

Moreover, other policy initiatives are also helping. Low-Income Countries (LICs) in particular also stand to benefit further from last week's decision by the G2O for a final extension of DSSI, and the IMF now has the green light to operationalise a US$650bn new SDR general allocation, subject to Board approval, which will benefit all its members, especially those with low international reserves relative to their quota.

But under the surface, a more cautious picture emerges.

We think the headline figure of US$110.5bn in financial support overstates real IMF assistance during the pandemic. The "true" figure could be argued to be less than half that. This is for two reasons.

First, the headline figure includes the contingent credit lines (FCL/PLL) to four Latin American countries (Chile, Colombia, Panama, Peru). Together, these facilities amount to US$54.6bn, about half the total provided, and account for 80% of lending to the Western Hemisphere.

While relevant in terms of the Fund's provision of financial assistance (of course, IMF financing is available to all its members), and presumably the Fund has to allocate capital against it which means less is available for other lending, we think it overstates, or at least seems to skew, the nature of IMF financing to its members (towards bigger emerging markets) and risks creating a misleading impression to those that might think the US$110bn is being provided to more vulnerable, or smaller EM, and especially low-income countries. Put another way, while 86 countries have received over US$110bn, 83 received US$56bn (Panama also received a RFI). While excluding the CCLs reduces the dollar amount the IMF appears to have lent, it does however increase the share that has gone to LICs, with Africa seen benefiting proportionately the most.

Whether to include credit lines is therefore an interesting question, both of optics and substance. True, Colombia has drawn 30% of its facility, which might suggest a need, whereas the other three haven't drawn theirs. But Colombia's FCL was approved in May 2020 (and augmented in September 2020) and we think there was a good chance it would have been sought anyway, regardless of Covid, even if the drawing was due to Covid (the facility approved last year was actually a renewal of its previous two-year facility that expired in April 2020, which was itself a renewal of its previous two-year facility agreed in 2016, neither of which were drawn).

This might imply that the total amount of IMF support provided during Covid is not really US$110.5bn, but either US$55.9bn (ex CCLs), or US$61.2bn (including the amount drawn by Colombia).

By the same token however, perhaps we should also add Morocco's drawing on its PLL last April. Morocco drew US$3bn under the facility early on in the pandemic, on 8 April 2020, although it doesn't appear in the Covid lending figures provided by the IMF. The amount represented all available resources under the facility, which was approved in 2018. 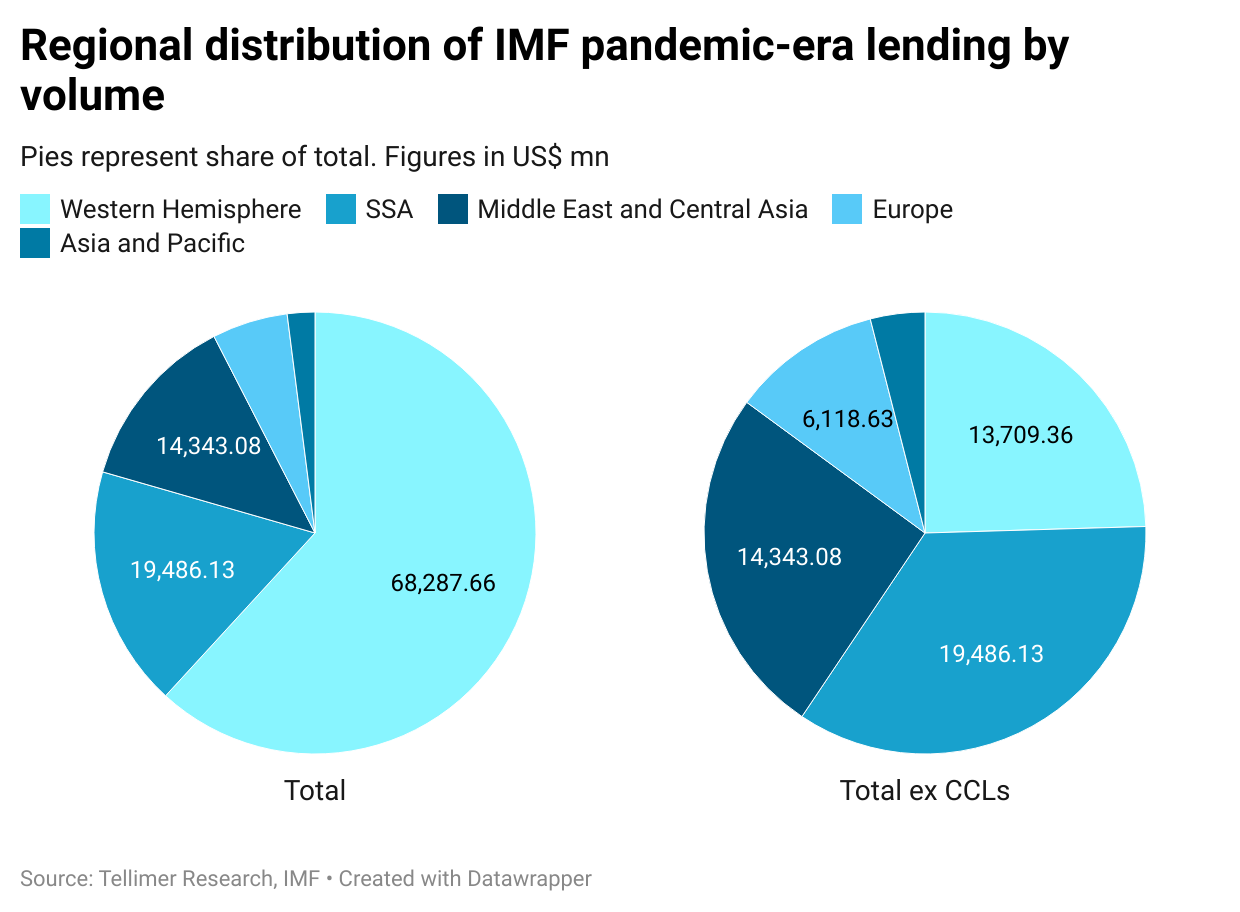 Second, let's decompose the remaining US$55.9bn. Of this, just over half (some 55%, about US$30.7bn) is emergency disbursements under the RFI/RCF. That is no doubt new funding under Covid and has been welcome. We calculate US$23.3bn is in the form of new programmes, and the remaining US$2bn is augmentation of existing programmes. 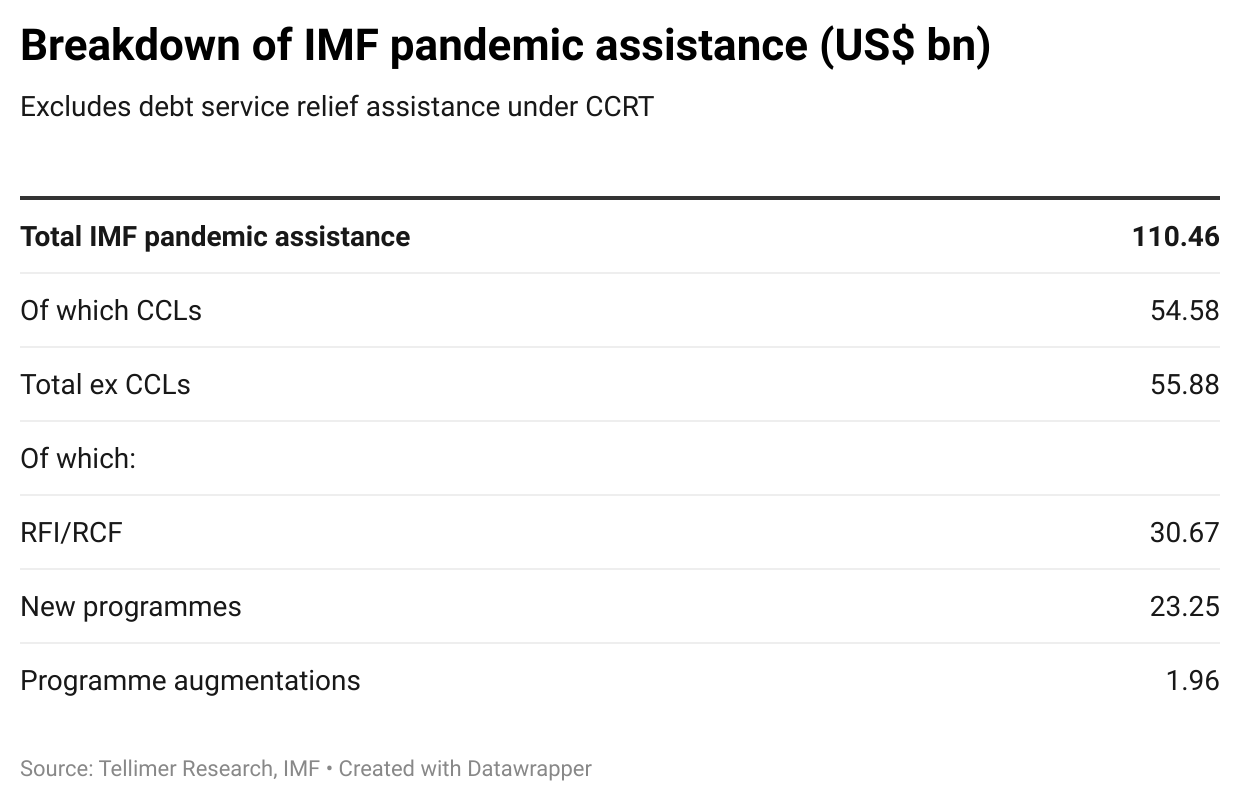 However, we'd argue even the US$23.3bn provided in new programmes, which covers 10 countries, overstates the extent of the IMF's pandemic assistance because we don't think it is all necessarily Covid-related. This is because it includes: i) a HIPC decision point package for Somalia, which we think would have happened anyway; ii) programmes for Jordan and Gambia which, although approved by the IMF Board in March 2020, the requests pre-date Covid; and most significantly, iii) programmes for Ecuador and Ukraine, where there might be some debate over whether they should be included or not; and they are large programmes, so it has a material impact.

The new programmes for Ecuador and Ukraine together amount to US$11.5bn (half of the total of new programme lending). The headline figure includes Ecuador's new US$6.5bn EFF approved in September 2020, but there might be a question over the extent to which this was additional lending. It was a replacement for the previous arrangement, a 36-month US$4.2bn EFF that was approved in March 2019. That arrangement was cancelled in May 2020, after just over a year, as the authorities sought a new programme and a restructuring in response to Covid. But there was already a programme. Maybe it might be more accurate to take the increase in size between the two programmes, like the treatment of an augmentation, as the additional lending due to Covid. This amounts to US$2.3bn.

Similarly, the headline figure includes Ukraine's new US$5bn SBA approved in June 2020, and there might be a question over the extent to which this was additional lending too, and its timing. While it was approved after Covid, the programme request originated pre-Covid. The IMF MD had already announced in early December 2019, pre-Covid, a staff-level agreement on a new three-year EFF for cUS$5.5bn. A programme for Ukraine was on the cards regardless of Covid. What Covid did do was change the nature of the programme that Ukraine ended up with (shorter, smaller SBA rather than an EFF). 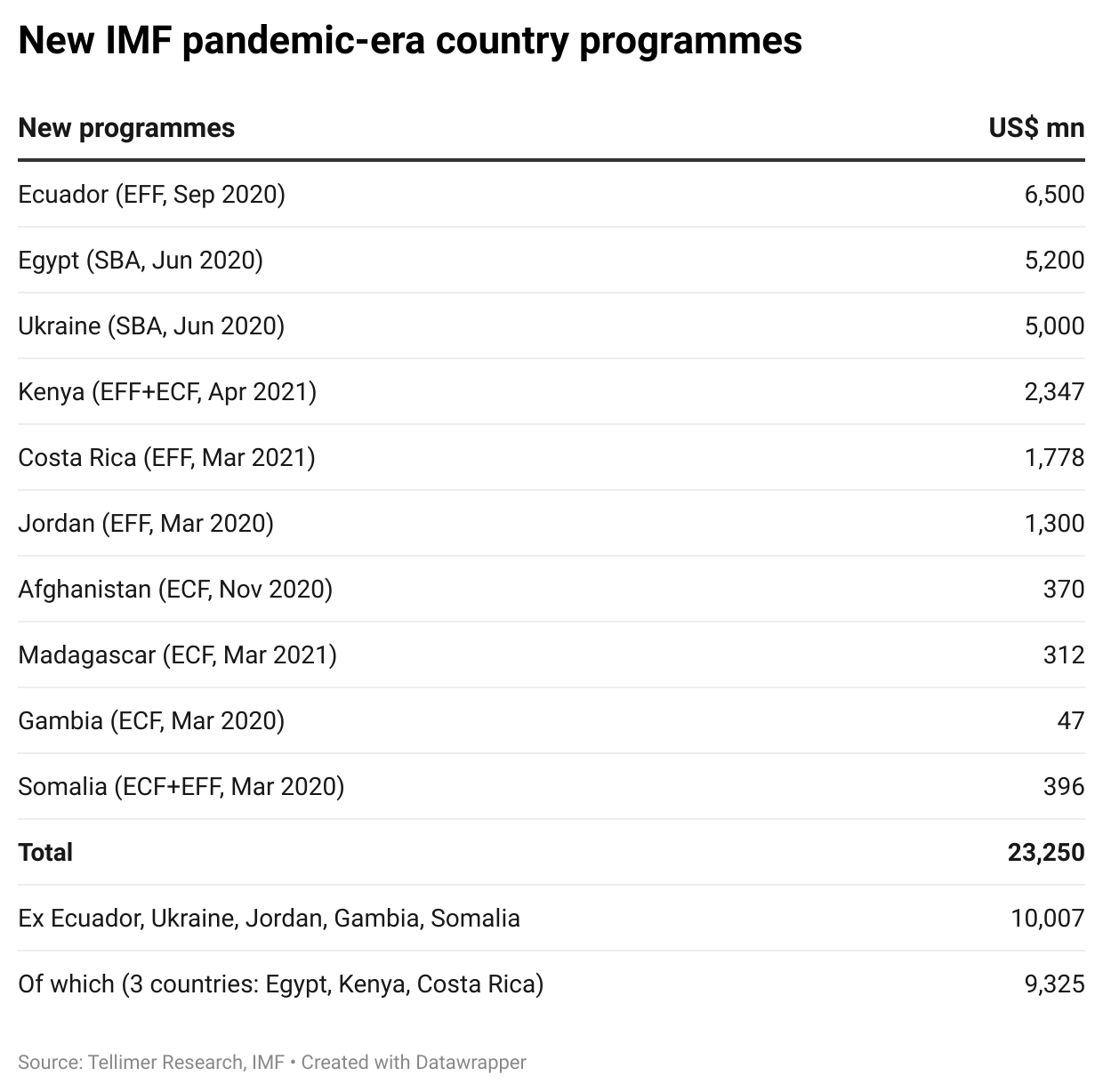 Hence, if we exclude these five countries as not really being Covid-related, new IMF programme lending in response to Covid has only been US$10.0bn, less than half the total reported by the IMF (or US$12.3bn if we include the part of the Ecuador programme that was additional). This comprises just five countries: Afghanistan, Costa Rica, Egypt, Kenya and Madagascar, and three of them (Costa Rica, Kenya, and Madagascar) have only been approved in the last month or so.

Moreover, out of this US$10bn, over 90% is accounted for by three countries – Costa Rica, Egypt, and Kenya. As we've said before, we count Egypt as the Fund's first proper post-Covid programme.

This implies that IMF pandemic-era lending on our adjusted basis has really been US$42.6bn, just 39% of the headline figure reported by the IMF, if we focus only on our assessment of Covid-related programme lending, augmentations, and RFI/RCF disbursements, and excluding CCLs; or, at a push, US$44.9bn if we add the part of the Ecuador programme that was additional, and US$50.3bn if we also include the amount drawn by Colombia under its FCL (but excluding Morocco). Even our latter, broader, definition is only 46% of the headline figure reported by the IMF.

There are however a few more programmes in the works that we know of – El Salvador, and Cameroon and Gabon (both of which follow their programmes which expired last year), Ethiopia, Moldova (where staff-level agreement was reached in July 2020 although nothing has been seen since), and of course Argentina, Lebanon, Suriname and Zambia, amongst others. Staff-level agreement on a US$200mn augmentation to Jordan's EFF has also recently been reached with the authorities.

But the real questions may be why we haven't seen even more programme requests during Covid, and whether the IMF has been bold enough, especially given its enhanced firepower.