IHS Tower listing: Cashing in on demand for infrastructure investment

Africa’s largest tower company, IHS Towers, recently launched its initial public listing on the NYSE, under the ticker “IHS”. It is offering 22.5mn shares in total (18mn of the company’s and 4.5mn of its shareholders', including MTN Group) at a price between US$21 and US$24 per share, valuing the company at cUS$6.9bn-8bn.

The share offering is c6.8% of the company. IHS Towers will raise US$472.5mn-540mn if the IPO falls within the price guidance. The proceeds will be used to fund organic and inorganic growth; ie tower building and acquisition. The IPO will be one of the biggest African listings in the US.

We expect the telco infrastructure industry to experience significant growth in the coming years, given the growth of mobile and internet penetration, improvements in 4G coverage and the 5G roll out. These trends are fuelling investment interest in the sector.

IHS Towers has over 30,000 towers in nine emerging and frontier markets, mostly African countries. It is the largest tower company in Sub-Saharan Africa, controlling c14% of towers in total. 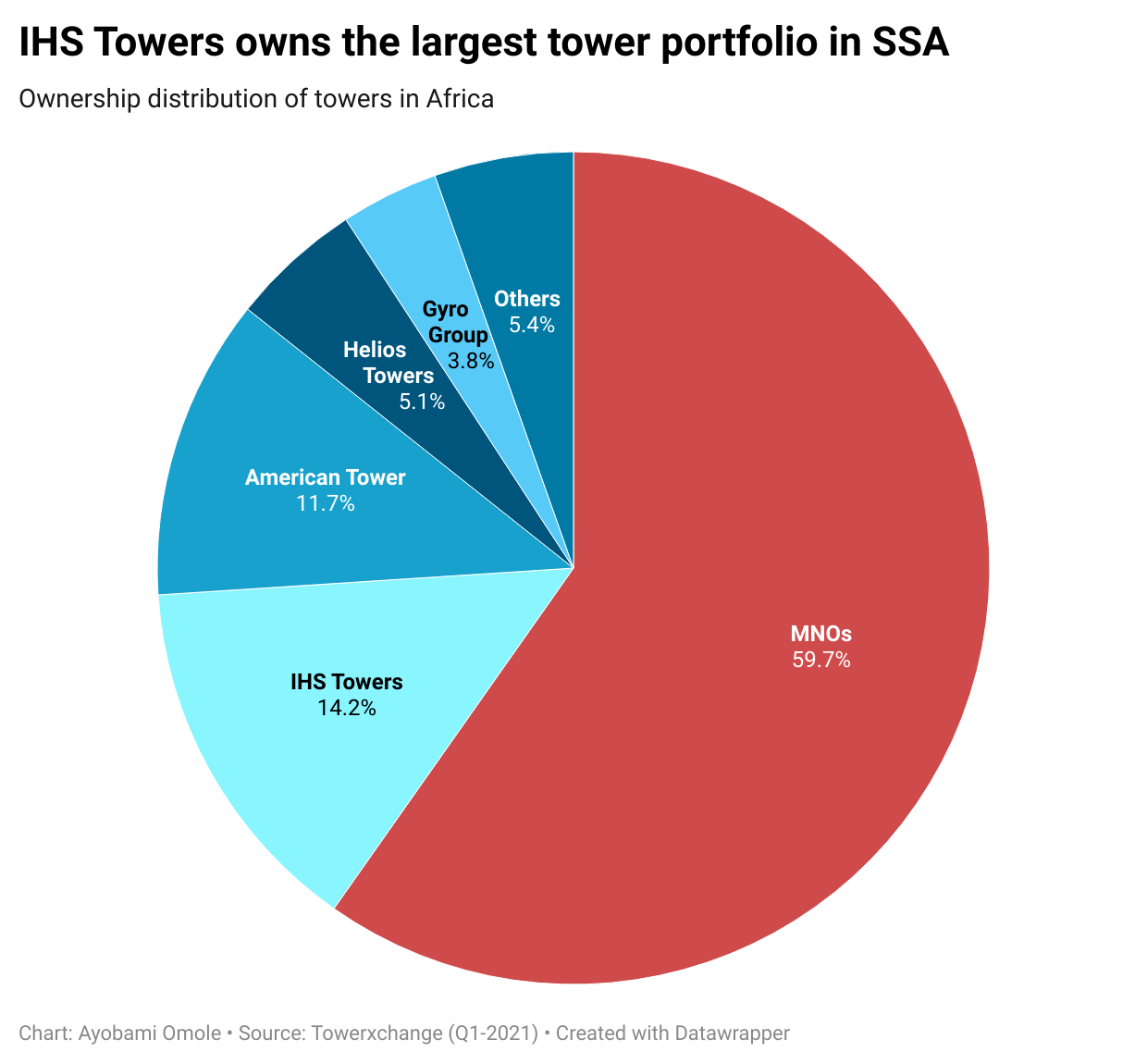 The company is the leader in all the African markets in which it operates and recently formed a joint venture to build 5,800 towers in Egypt, further highlighting its commitment to taking advantage of the tower company opportunity in Africa and indeed in other emerging markets. We think IHS Towers is an excellent vehicle for exposure to telco infrastructure in Africa. 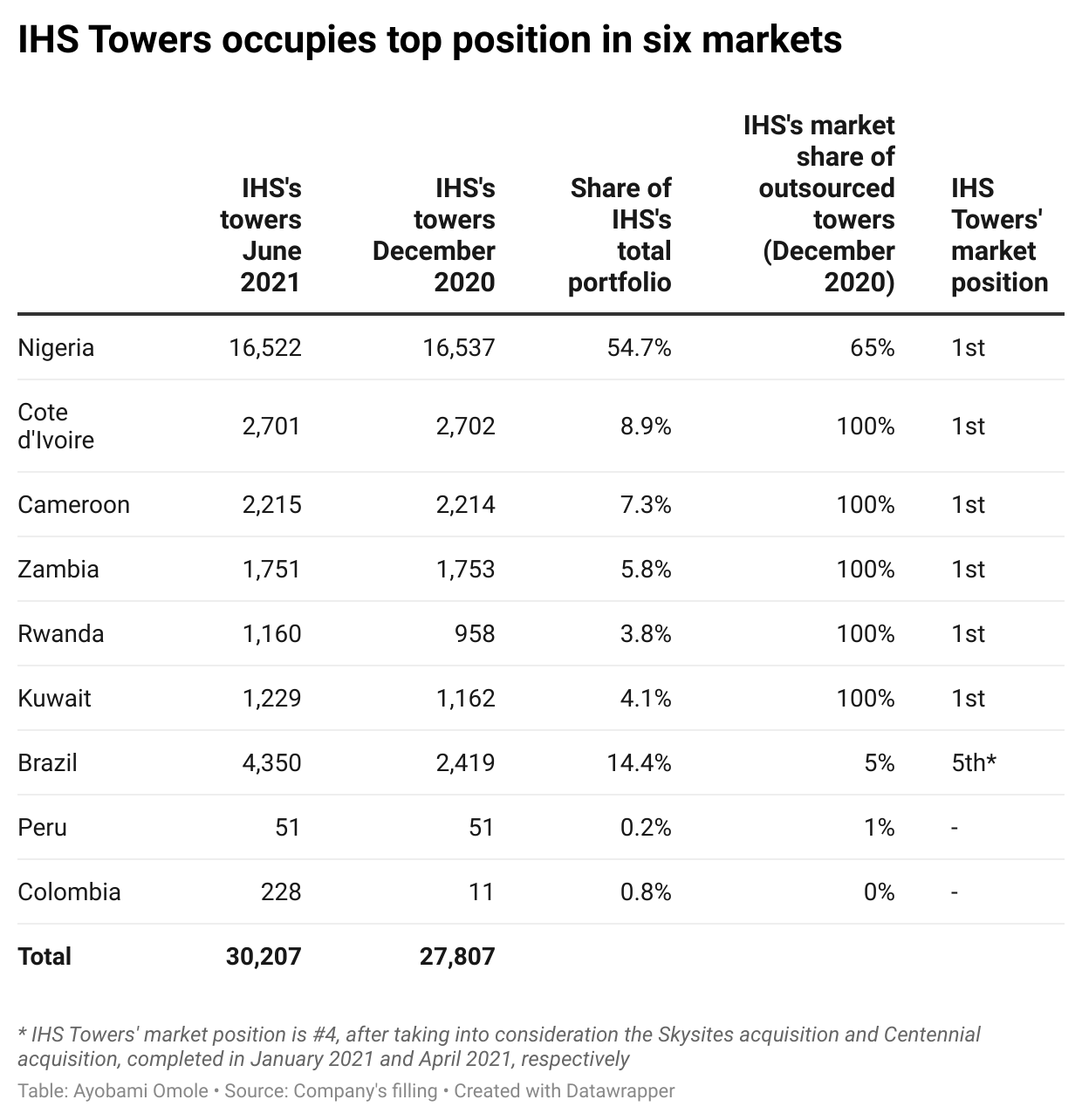 IHS Towers’ operations are concentrated in Nigeria, where 67% of its African portfolio is situated, as well as c73% its total revenue and c85% of its EBITDA. Most of its lease contracts with its major Nigerian client, MTN Nigeria, are dollar-based, reducing its exposure to naira currency risk. 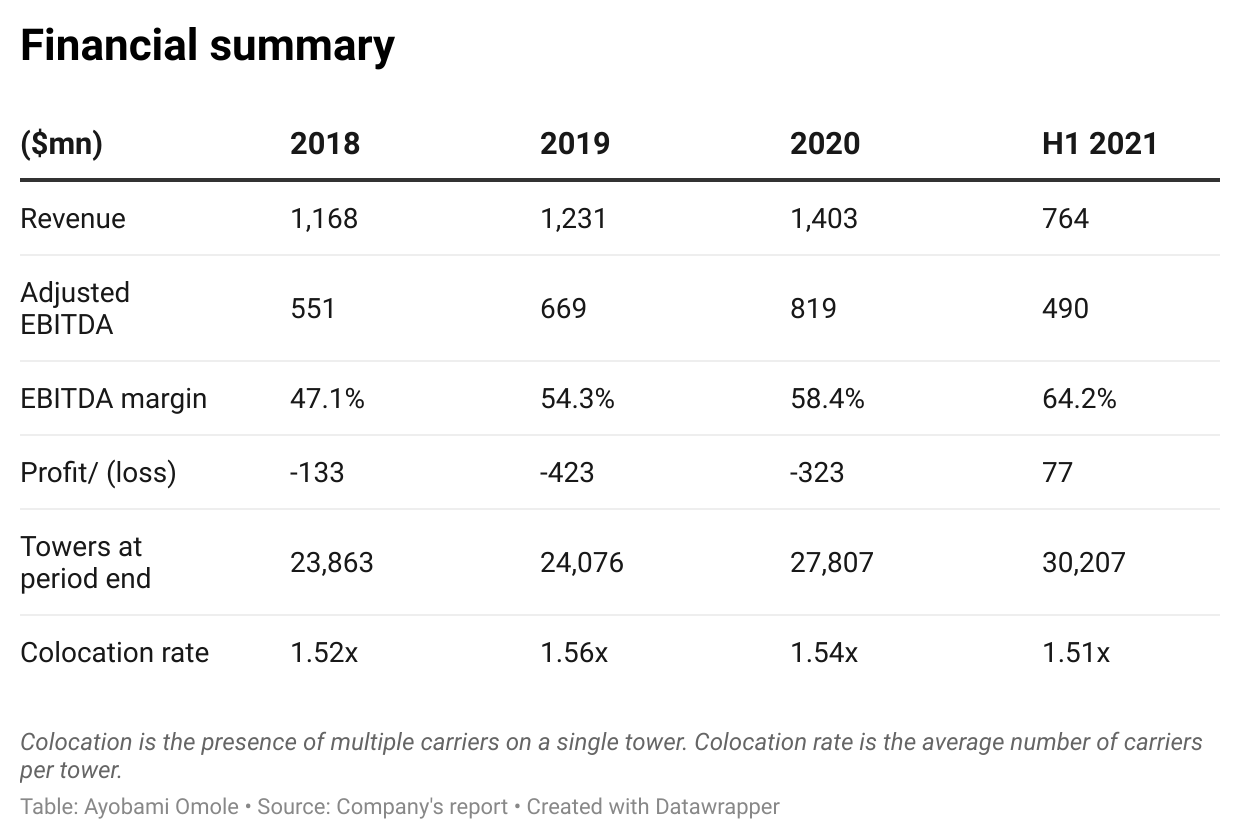 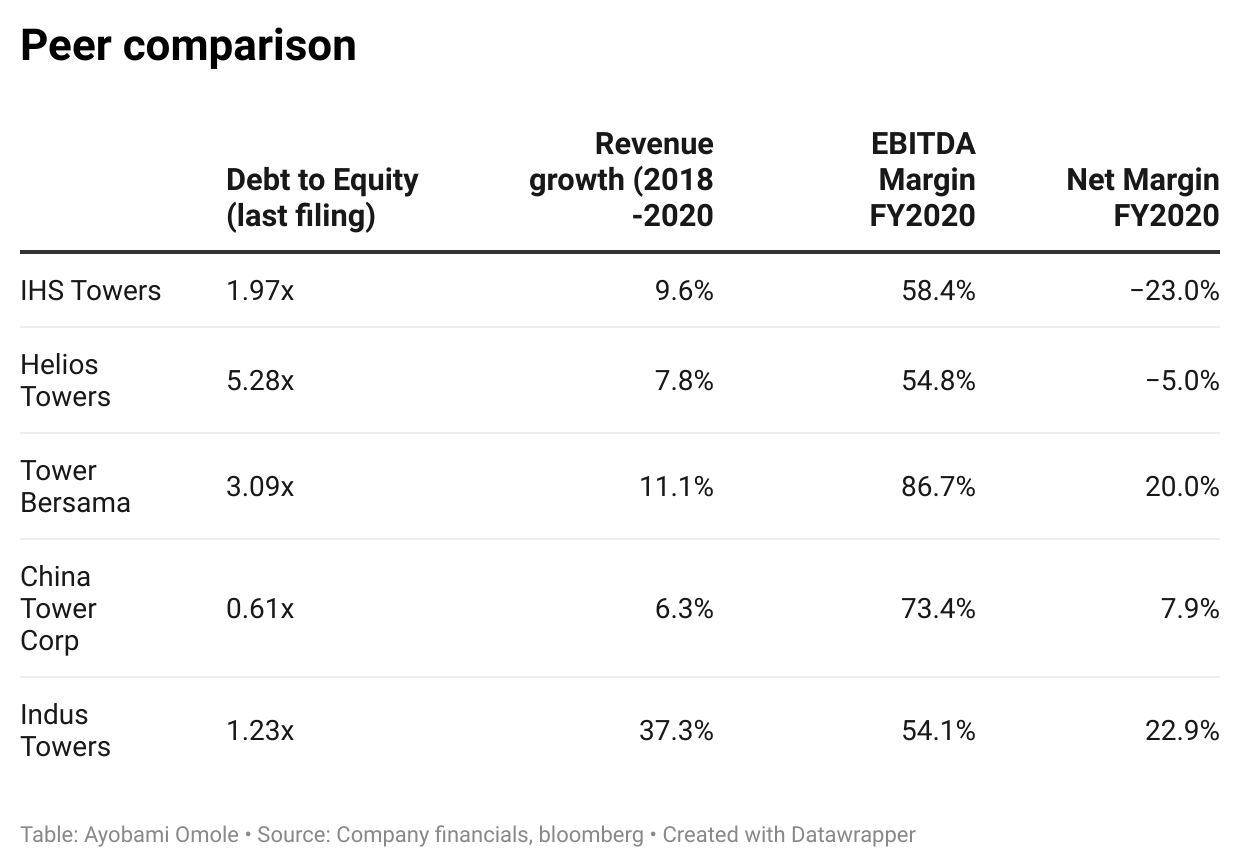 Emerging market tower companies typically trade at lower multiples when compared with developed country tower companies because of elevated political risk, economic instability and currency risk. However, EMs also have huge potential for growth, given that their telecommunication sectors lag far behind their developed market counterparts in terms of development – this gap creates opportunities for expansion for mobile operators and infrastructure providers. 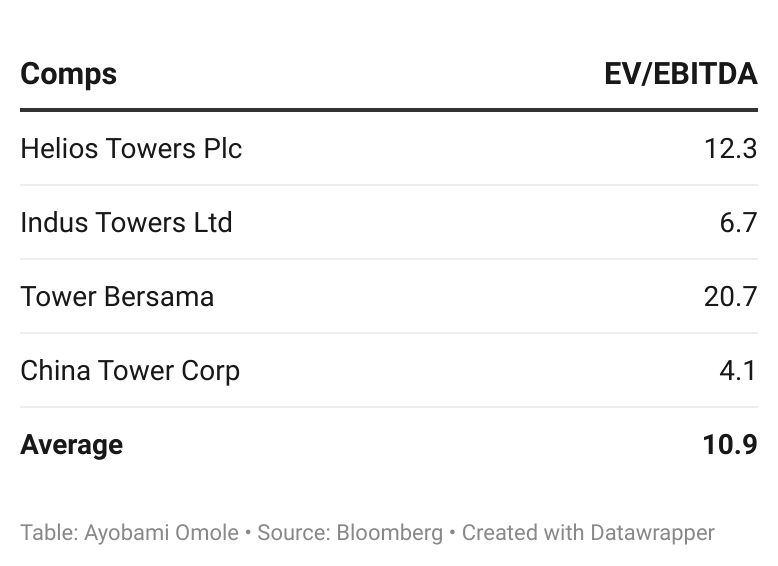 Of the EM tower companies, the market seems to place a premium on Tower Bersama because of its superior margin. Helios Towers and IHS Towers have similar EBITDA margins (lower than the peer average), which can be attributed to the higher power costs for tower companies operating in Africa. 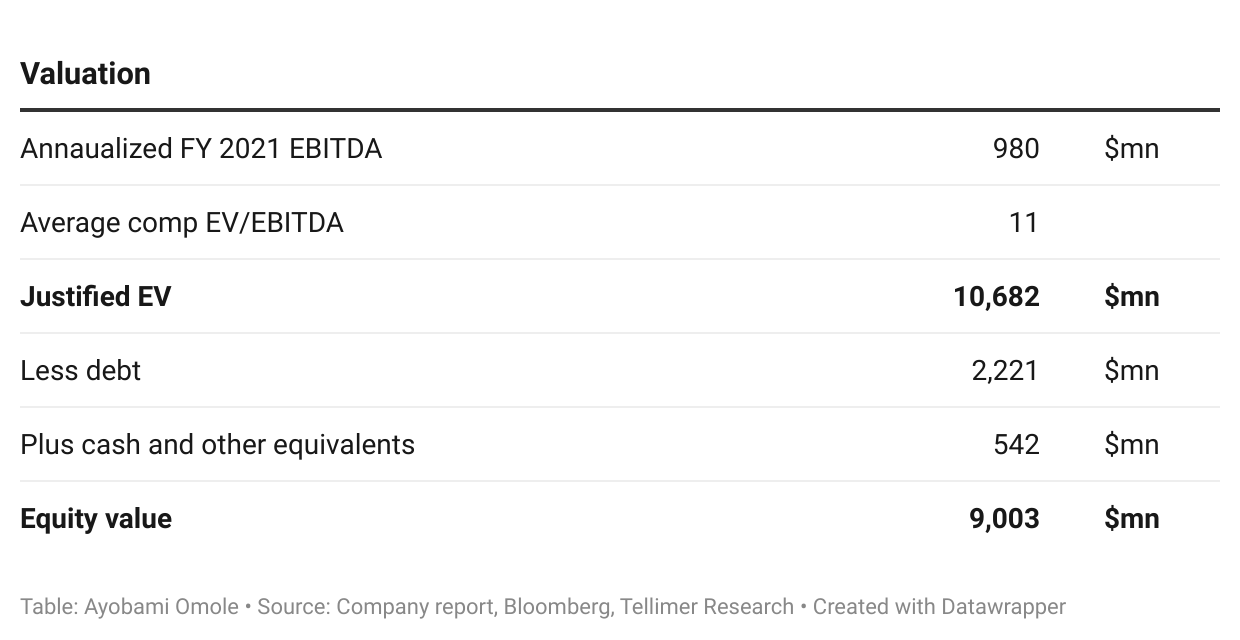 Emerging market peers trade at an average EV/EBITDA of c11x and have traded between 10x and 12x this year. Relative valuation puts the enterprise value of IHS Towers at US$10.6bn and the equity value at US$9bn, bringing the fair value per share to cUS$27 per share, which is higher than the targeted range of US$21-24.

Given all this, we are bullish on IHS Towers and believe it is a good outlet for investors seeking to gain exposure to Africa’s growing telecom infrastructure sector.

The listing could also have a positive effect on other companies, most notably MTN Group, which owns 29% of IHS Towers. It will provide liquidity that could be used to hasten MTN’s asset-realisation program (the program also includes a stake sale in MTN Nigeria and the sale of its tower portfolio in South Africa), the goal of the asset-realisation program is to free up capital to fund MTN's emerging and growing business lines, such as its mobile money and the fibre company business. This refocusing is a possible growth driver for the mobile money business and should eventually drive MTN’s valuation towards that of its regional peer, Safaricom.

Telkom SA has also announced plans to list its tower business, Gyro Group, on the Johannesburg stock exchange. A successful listing for IHS Towers could be good news for Gyro's listing as well, as investors seek exposure to African telco infrastructure. Other tower companies operating in the region are much smaller, save the four highlighted here, but could still benefit from increased private investment in the sector over the coming years.