Boris Johnson admires, and—in those halcyon days of 2019 when he still had an aura of gumption and competence—likened himself to, Winston Churchill. Donald Trump admires himself. To understand the position their countries find themselves in, however, they should look to a different period in history for inspiration. Neither to Boris’s imagined past nor to Trump’s myopic present, but rather to the great Cold Warriors of the 1950s and 1960s.

I had the great honour to be mentored by two of those great Cold Warriors—Walt and Elspeth Rostow—and I remember sitting with them in their home in the Texas Hill Country in the years before Walt’s death looking out over the Colorado River. “It’s beautiful,” I said. “Yes,” said Elspeth. “George Kennan said it reminds him of the Volga.” Walt had been hounded out of MIT for his role in the Vietnam War, which he would defend to his grave, while George Kennan, an early critic of the Vietnam War, had left the State Department for the Institute of Advanced Studies at Princeton as a critic of militarisation of US Soviet policy. Although they had been on opposite sides of the argument, they were of the same world, saw foreign policy with the same seriousness and took their adversaries seriously.

A quick review of the data provides a good reminder of why the US and UK should take the present competitor, China, as seriously as those Cold Warriors took the Soviet Union. To look at just one metric, since 2015, China’s economy and its FDI as caught up with that of the US, making a close relationship with China a viable alternative to a close relationship with the US for emerging markets.

Figure 1: For the past five years, Chinese outward FDI has been on par with that of the US

Unsurprisingly, prior to Covid-19, views of China were correlated with development, with citizens in developing countries much less likely than those in developed markets to have a negative view of China.

Figure 2: Prior to Covid-19, views of China were highly correlated with national income, with wealthier countries having a more unfavourable view of China

Sitting in London today, it’s easy to spend 24 hours a day digesting the intricacies of Boris’s foreign policy mishaps: the Brexit deal u-turn, Australian TV quipping that their allegedly misogynist, climate-sceptical ex-prime minister Tony Abbot is only being asked to advise the UK on trade because “beggars can’t be choosers”, and the list goes on. Many commentators have alleged that an overreliance on public opinion and focus groups is one of the drivers of the Johnson administration’s policy chaos; I worry that the obsession with the domestic is at the expense of retaining international economic (and therefore political) influence.

The Cold Warriors understood the importance of international public opinion, and they were willing to send their countrymen to die for it. Although the USSR was significantly poorer than the US in 1960, with GDP per capita roughly half that of the US, it was growing faster, and decolonisation helped to strengthen the Soviet Union’s geopolitical influence. If the West was to win the Cold War, it needed to be seen both to stand by its allies and as competent and successful.

But then the Cold War was over; with no rivals everyone was now an ally by default, and you could even be wealthy, successful and funky all at the same time. Politicians had the luxury of ignoring foreign policy and, even after 9/11, ignoring great power rivalry. The US was, in the words of the French, an hyperpuissance—the first hyperpower since the Roman Empire—and (to my great frustration when I was a US government official) Britain saw itself as Greece to America’s Rome. Meanwhile voters had the luxury of backing whichever side appealed most to their cultural sense of self without needing to worry about whether they could lead in a crisis.

China was already eroding western soft power when Covid-19 struck, but Covid has dramatically accelerated that transition. Uniquely among major developed countries, the majority of both Brits and American feel that their country has handled Covid badly. The Trump administration is considering loosening regulatory standard to fast-track a vaccine ahead of elections. The UK appears to have avoided the summer spike in Covid-19 that much of Europe experienced not because of subtle policies but rather because the public does not appear to believe the government that it is safe to return to work. In both countries, the best hope for the economy is that Covid-19 has spread sufficiently to soon achieve herd immunity. Meanwhile, even if Trump and many Americans blame China for Covid-19, China is widely seen elsewhere to have handled the virus well.

Figure 3: The IMF’s latest growth forecasts show that China is weathering Covid-19 better than the US and UK 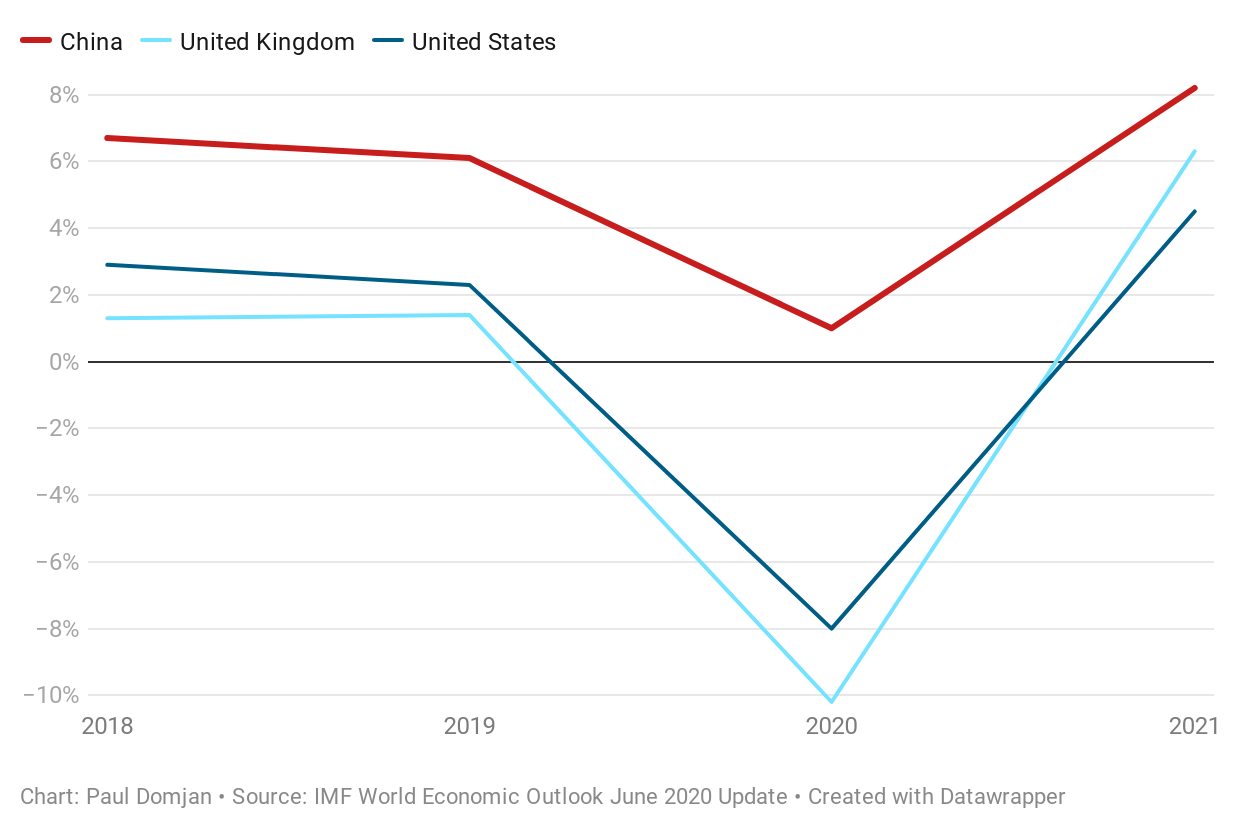 All of this erodes soft power. The 2019 Anholt-Ipsos Nation Brands Index ranked Britain and the US fourth and sixth, respectively, out of 50 nations, and Britain’s single strongest score was as a place to study, where it ranked second. The 2020 edition of the index hasn’t been released (and I’ll cover it when it is), but we can be sure that both of these ratings have slipped. Indeed, preliminary data released from the new index shows that the US is one of the five nations with the greatest “net negative” favourability for its health crisis management, alongside India, Brazil, Mexico and Nigeria. Although UK universities are reopening, international students are struggling to even reach the UK to study, and continued questions about the future of immigration policy leave international students uneasy about the possibility of building a long-term future in the UK. I expect that the UK will lose its choice status as a place to study.

Figure 4: Germans' views of which relationship is more important have shifted sharply post-Covid, which may be indicative of a wider shift in views towards China

If Germany can turn so sharply against the US, consider how the US’s and the UK’s perceived lack of competence and international engagement must be damaging their reputations in emerging markets. I have written before about how admiration for China is palpable across much of Africa. Indeed, I remember vividly when a senior African policymaker explained to me that “the US lectures us about what to do with the money we don’t have, while the Chinese ask us what we need.” This attitude has surely strengthened during Covid-19. I expect to see confirmation that the US and UK hold less appeal for citizens of emerging as new global polling data begins to become available later this year and next.

It’s also bad news for the West. Earlier this year, one of the inevitable chores of the adult child in his 40s fell on me: convincing my father-in-law that his phone wasn’t broken, just old, and that if he got a new one he would end up paying less because his five-year-old plan was no longer the best deal that MTN has to offer. After much cajoling, we set off across Cape Town to the MTN shop. On the way, my father-in-law set down the rules, and the last one surprised me: “No, Huawei.” “Why?,” I asked. “Because Trump has it in for them.” My father-in-law wasn’t going to let geopolitics get in the way of his pictures of his grandchildren.

US policy towards Huawei is costing them much more than one lost mid-range phone sale in South Africa. In the first phase of the battle, Huawei lost access to Google services, and it looked like Huawei might survive by building its own app store and new partnerships for essential services like maps. Indeed, Wired magazine thought that Huawei might free Android from Google’s control. But that was not to be. Huawei now cannot build mobile phones at all without access to chipsets with US technology, and its current stockpile of chips is expected to last two years. It could last longer if more customers follow my father-in-law’s lead, but those chips are going to be far from the technology frontier in two years’ time.

US dominance in chip technology, and the UK’s ability to punch above its weight through ARM, give both countries unique economic and strategic capabilities. The Trump administration has shown the power of those capabilities by killing Huawei’s mobile phone business. A victory to the US in the short term, but also a lesson to China and its allies that they cannot rely on aligned self-interest to maintain access to key technologies. Developing an independent chip design and manufacturing capability will now be a strategic priority for Beijing. If this does not worry the Trump administration, then they are underestimating their rivals—a mistake that the Cold Warriors were careful never to make.

This “Westlessness”, as my colleague Hasnain Malik has termed it, is bad news for investors. The US and UK lie at the centre of a rules-based, English-speaking international economic order. While the US and UK benefit from the English-speaking part, all investors benefit from the rules-based part. Today, China is not the only power to benefit, although it is the most notable. While China has become more assertive both at home and in its near abroad, Russia is also seeking to expand its influence, including securing military bases in six African countries. The Cold Warriors would have understood how strong a position the West was in a decade ago, and they never would have given it up so easily.