How to prosper from the Chinese pork price bubble

2019 marks the 70th anniversary of the Founding of the People's Republic of China. But, for the average consumer in the country, it may be remembered for the soaring prices of the country's great staple – pork. China consumes more than half of world's pork supply. Pork is a vital element of the diet, which implies that the disruption caused by African swine fever (ASF) has had catastrophic consequences for China's food supply.

ASF has a 100% fatality rate and there is no vaccine. Over 150mn pigs (out of a population of 400mn) have been culled in China due to ASF. Chinese pork prices have risen 70% in the past year. The average pork price paid by wholesalers is up 85% since August.

In this pork bubble, there is a sharp divergence between the performance of pork producers and processors. Chinese pork producers such as Muyuan Foodstuff (002714 CH), Cofco Meat (1610 HK), Wens Foodstuffs (300498 CH) have risen sharply ytd. In contrast, companies that use pork inputs for processed products such as WH Group (288 HK) and Charoen Pokhpand Foods (CPF TB) have weakened. 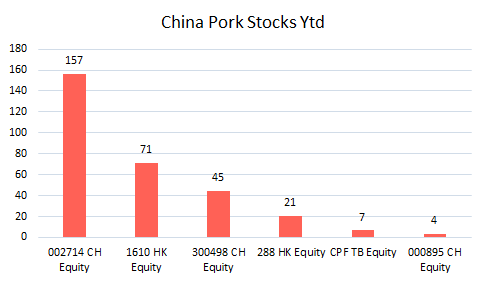 The market is positioning for a further rise. Soochow Bank has predicted a further 40% rise to CNY30 (US$4.20) per kg. This is assuming a severe shortage where China's pork production falls by over 20%.

However, we disagree. Pork prices may not remain at these elevated levels, and a sharp correction could be in the offing. The government has announced moves to spur pig farmers to breed more hogs. In mid-September, it was announced that 10,000 tonnes of pork would be released from the central reserves to curb prices.

The soaring prices have already led to exceptional measures. Local governments are offering discounted pork. For example, in Nanning people are limited to 1kg of pork. In Fujian, subsidised pork is on offer.

Pork processors such as 43 HK, CPF TB, CPIN IJ and JAP SP seem to have been mispriced in the wake of the African Swine Flu outbreak. In our view, they have unjustly underperformed. These companies are highly branded and have excellent cash generation.

CPF TB is a Thai-listed regional player with over a tenth of its revenue derived in China. CPF TB is trading at just 5x EV/EBITDA, if one strips out its associate investment in CPALL TB, which is half the peer group average. We have a Buy recommendation on CPF TB with an unchanged target price of THB38.0.

Previous outbreaks of swine flu in 2009 and bird flu in 2013 were buying opportunities in the space. Investors need to look beyond ASF. Pig prices are flying high, but the laws of gravity will catch up with the pork producers such as Muyuan Foodstuff (002714 CH) and Cofco Meat (1610 HK).
Share this article
Most ViewedSee latest