How regulators in emerging Asia are supporting tech development

Technology is the cornerstone of the modern economy and a key driver of economic development. In many areas, emerging markets lag their DM peers significantly in terms of technological penetration, but we are seeing rapid improvements. Although the private sector is usually at the forefront technological advancement, the right regulatory environment and technological infrastructure is essential to form a robust ecosystem.

With this in mind, some emerging markets governments and regulators have put in place aggressive targets to lift technological penetration over the next 5-10 years. In this report we look at four small emerging markets in Asia (Bangladesh, Pakistan, Philippines, Vietnam) to assess their targets for the digital economy, key proposed initiatives and some recently taken steps.

We identify three key areas where these regulators are focusing their efforts: 1) raising the contribution of the digital economy to GDP; 2) improving access to the internet; and 3) lifting financial inclusion through technology. 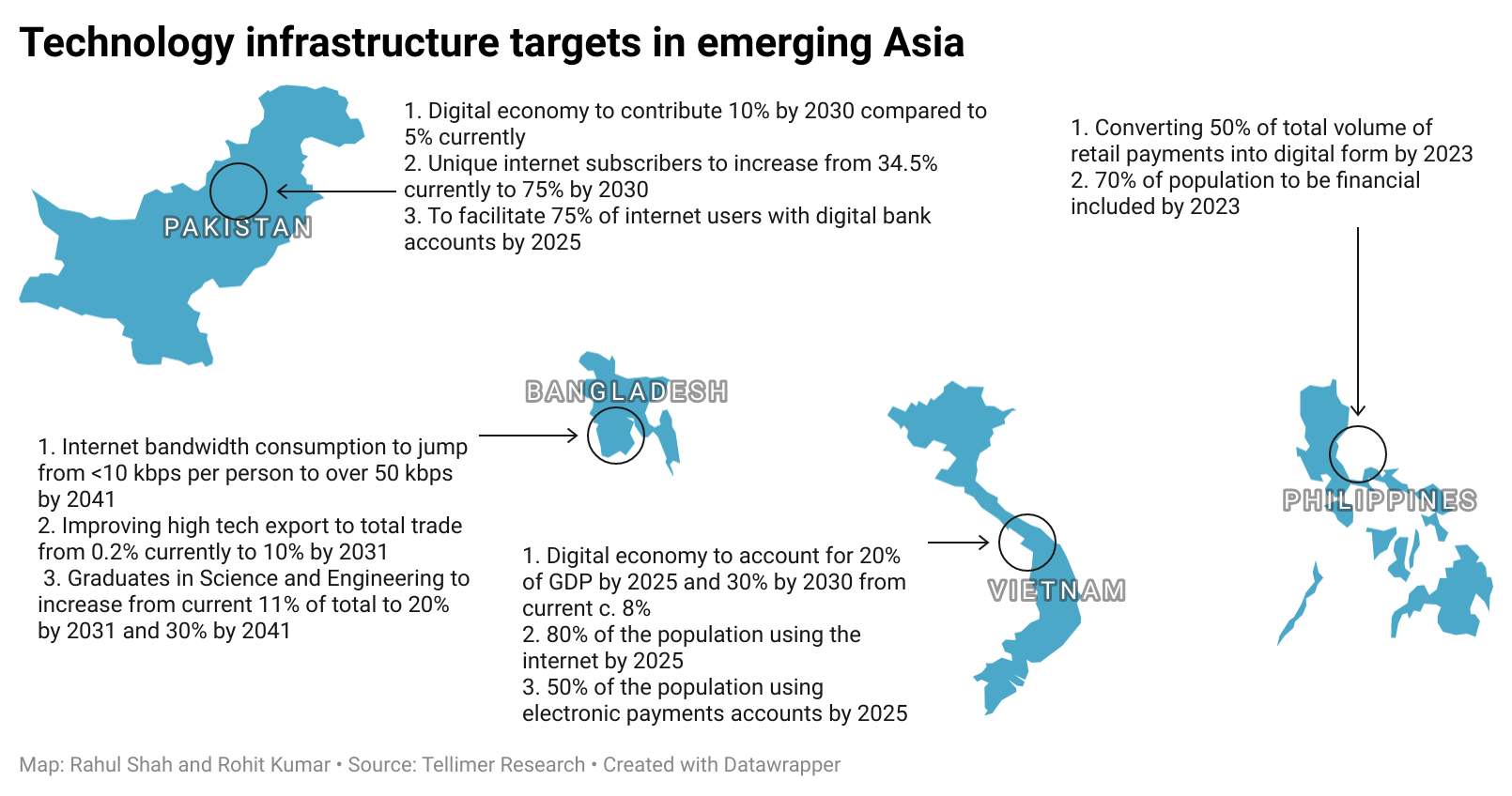 1) Increasing the contribution of the digital economy to GDP

The digital economy incorporates sectors such as e-commerce, online advertising, cloud computing etc. Considering the rapid digitalisation taking place across a wide range of industries, the digital economy’s impact is broadening and will likely be one of the key contributors to overall economic growth in many emerging markets.

Internet access is fundamental to growing digital adoption. However, many emerging markets provide a poor internet access experience. Looking at our four surveyed markets, Vietnam wants its broadband network infrastructure to reach 80% of households by 2025. Bangladesh targets average internet bandwidth consumption to jump from less than 10 kbps currently to over 50 kbps by 2041.

Financial inclusion is an important pillar for economic growth, but is still at a poor level in many emerging markets. However, fintech companies are now targeting customers hitherto ignored by traditional banks. Vietnam plans to have 50% of its population using electronic payment accounts by 2025, while by 2023 the Philippines aims to convert 50% of the total volume of retail payments into digital form and ensure 70% of its population is financially-included. Pakistan is targeting 75% of its internet users to have digital bank accounts by 2025.

Bangladesh is weak compared to EM peers in terms of its technological sophistication – it scores poorly on the GSMA mobile connectivity index and also has weak e-commerce penetration and a low volume of high-technology exports. However, there are some positive developments also, such as the strong adoption of mobile money (41mn active mobile wallets). The government and regulators are also pushing aggressively to lift technology penetration, with key targets including increasing overall internet usage, more IT research and development and more IT graduates. The country also aims to increase the share of high-technology goods in its exports basket.

However, there are various challenges such as customer awareness/trust and the undocumented economy that are stopping SMEs from adopting these new technologies. That said, the potential remains huge as the population is young, and recent developments such as strong mobile wallets adoption are encouraging.

Note: Some of the targets are based on the draft National Broadband Policy 2021, which maybe subject to change.

The Philippines scans well on most technological metrics, with strong mobile and internet penetration. The government is targeting to further improve this positioning, and has set some specific targets pertaining to financial inclusion through digital channels. The country aims to have 50% of retail payments in digital form by 2023 and wants 70% of the population to be financially-included (2017: 34.5%). There have been various proposed initiatives to strengthen the country’s digital ecosystem, such as extending QR code use-cases, promoting payments system interoperability, a national broadband plan and a cybersecurity plan.

Vietnam’s technology ecosystem is more sophisticated than most of its EM peers. The country has good internet and mobile phone penetration and it also scores well on cybersecurity metrics. Despite this, regulators have very aggressive plans to further boost technology penetration. Vietnam aims to lift the digital economy’s GDP contribution to 20% by 2025 from the current 8%, and wants 50% of the population using electronic payments by then. Given Vietnam’s young, tech-savvy population and considering recent strong trends in digital adoption, we think the country can achieve these set targets.