How regulators are striving to turn back the cryptocurrency tide

Tighter Chinese regulation of cryptocurrencies has added to the recent downward price pressure on Bitcoin; last month's Coinbase IPO may come to be viewed as a high water mark. As the world’s second-largest economy, its largest bitcoin miner (by far), and a key centre of blockchain expertise, China has a big influence over the future direction of the cryptocurrency space. Moreover, the country is not alone in trying to control the insatiable demand for this asset class. We consider here how six other emerging markets (Argentina, Bangladesh, Egypt, India, Nigeria and Pakistan) are tackling the cryptocurrency boom. 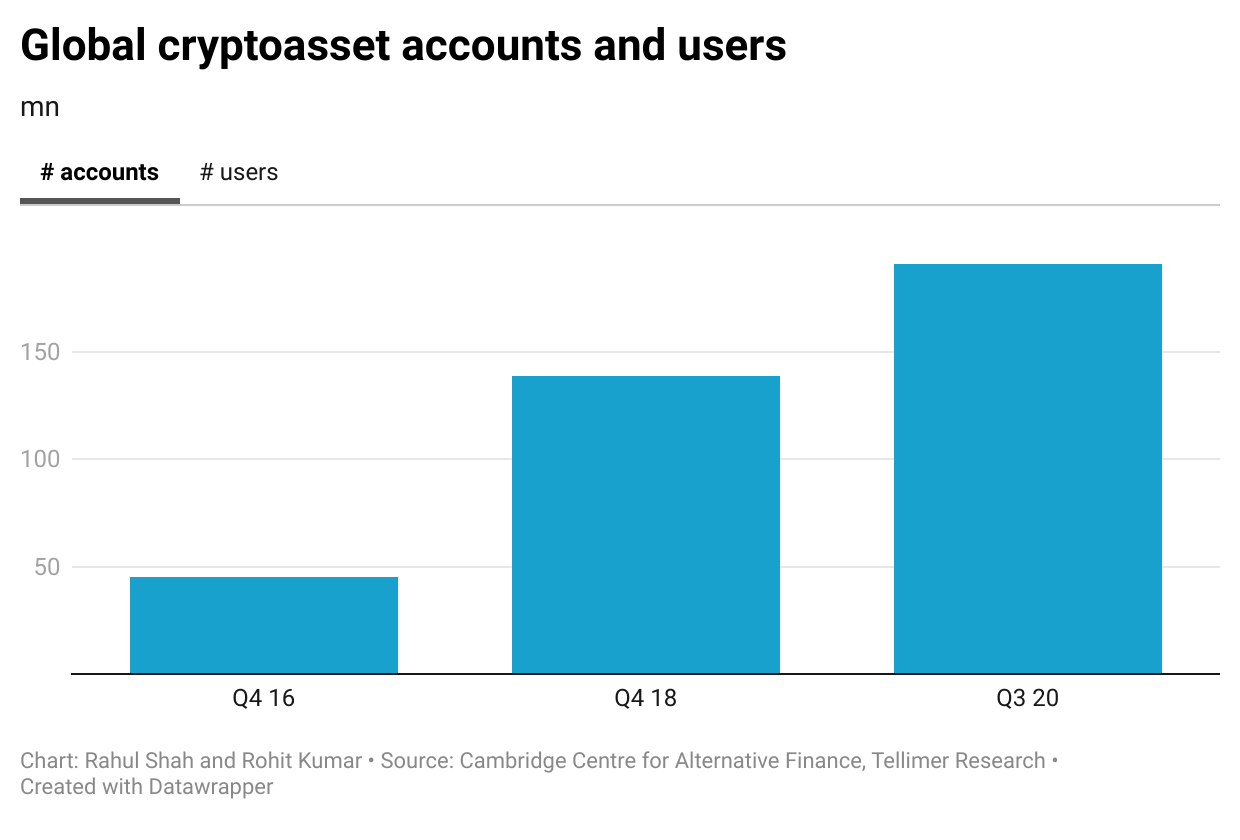 One of the key challenges regulators face relates to the fundamental character of cryptocurrencies; traders can benefit from anonymity, making it difficult for authorities to take action. Cryptocurrency businesses, such as exchanges, can find it harder to escape regulatory scrutiny. But individuals can stay under the radar through peer-to-peer transactions, thereby bypassing the need for a registered financial intermediary.

We consider below the cryptocurrency experience of six emerging markets. Despite regulators’ dampening efforts, trading volume has increased substantially in recent months. Some of the key firms facilitating this activity are listed here: 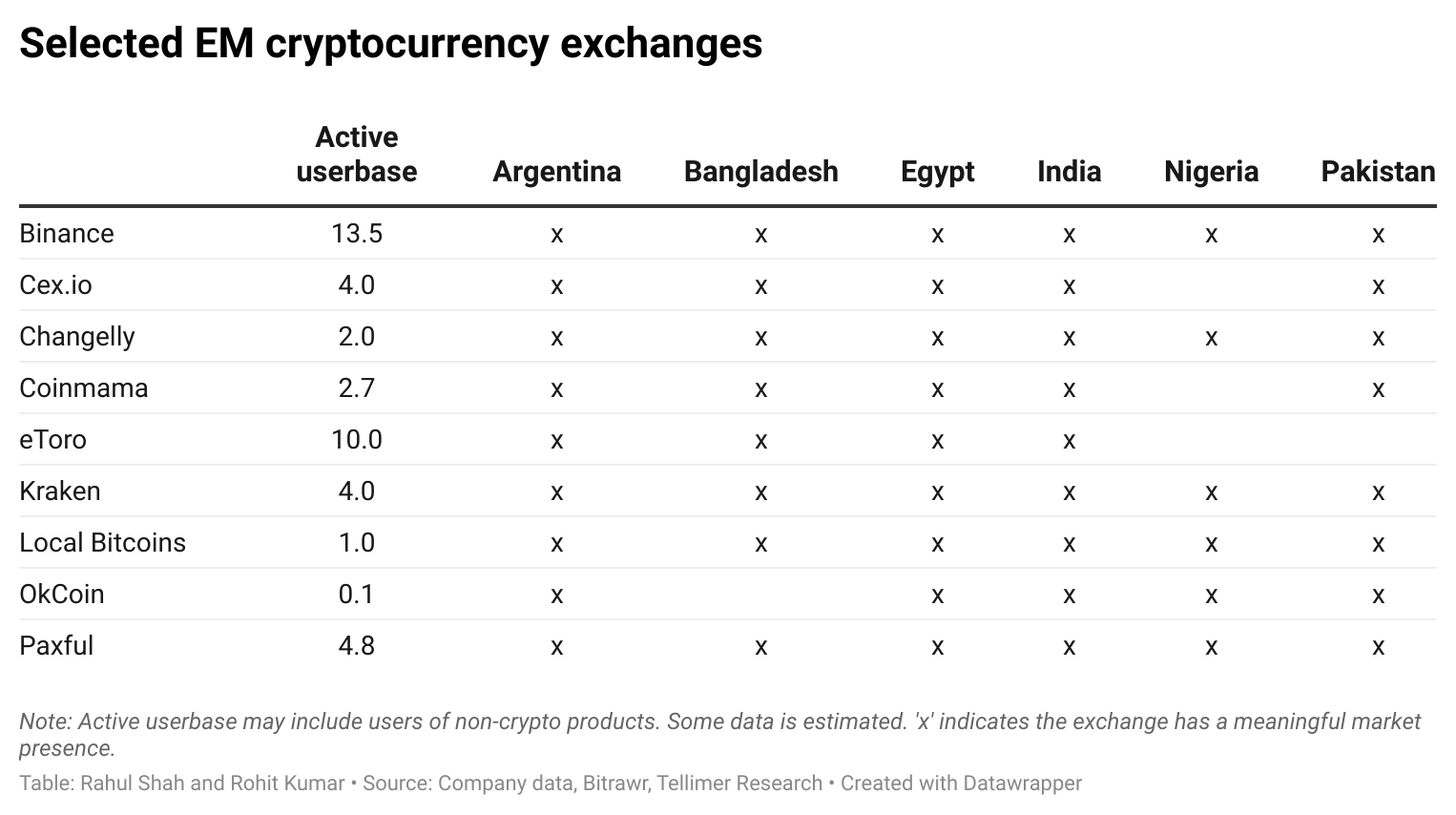 As cryptocurrencies move mainstream, the Argentinian government appears to be tightening its controls on the sector. Earlier this month, the Federal Administration of Public Revenue (AFIP) ordered all crypto-related companies to file monthly reports of virtual currency-related transactions. AFIP requires the companies to identify each of their clients, along with total amounts of income and outgoings, and final monthly balances. The ruling also affects mobile wallet operators that have crypto functionality, like Mercado Pago. The introduction of this regulatory reporting mechanism could crystallise tax liabilities for cryptocurrency traders and keeps the door open for more stringent regulations to be introduced in the future.

The central bank issued a cautionary notice on 24 December 2017 stating that the trading of cryptocurrencies is illegal, and any such activity will lead to the violation of money laundering and terrorist financing obligations. Furthermore, transactions in virtual currencies do not conform with provisions of the Foreign Exchange Regulation Act 1947, Anti-Terrorism Act 2009 and Money Laundering Prevention Act 2012.

Cryptocurrencies are prohibited in Egypt. In 2018, the Grand Mufti (the most senior religious authority) of Egypt declared cryptocurrencies forbidden under Islamic Law, citing issues such as volatility and anonymity that could facilitate tax evasion, money laundering and terrorist financing. Banking laws also prohibit the issuance, trading and promotion of cryptocurrency and electronic money without licenses.

Despite these regulatory prohibitions, cryptocurrency volumes in Egypt have risen sharply. For example, new registrations in Egypt on LocalBitcoins (a Finland-headquartered crypto trading platform) doubled in 2020 from 2019. Person-to-person (P2P) Bitcoin trading volumes have also increased substantially. 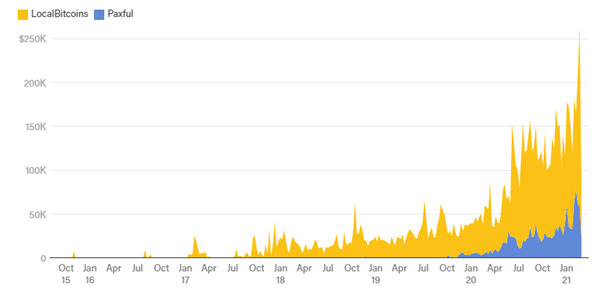 Increased regulation of cryptocurrencies in India seems to be around the corner. Earlier this year, the Indian government was reportedly considering a complete ban on all private-sector cryptocurrencies. However, more recent news reports suggest that, after pushback from various cryptocurrency stakeholders, the government might instead look to better regulate the sector, after asking a panel of experts to perform a study and report their findings. The government is also reportedly planning to launch its own virtual currency, a digital rupee, thereby joining a select group of other sovereign issuers, such as China and the Eastern Caribbean Currency Union.

Like many other emerging markets, India has also seen a sharp rise in crypto trading volumes, which rose by c400% between March and December 2020. 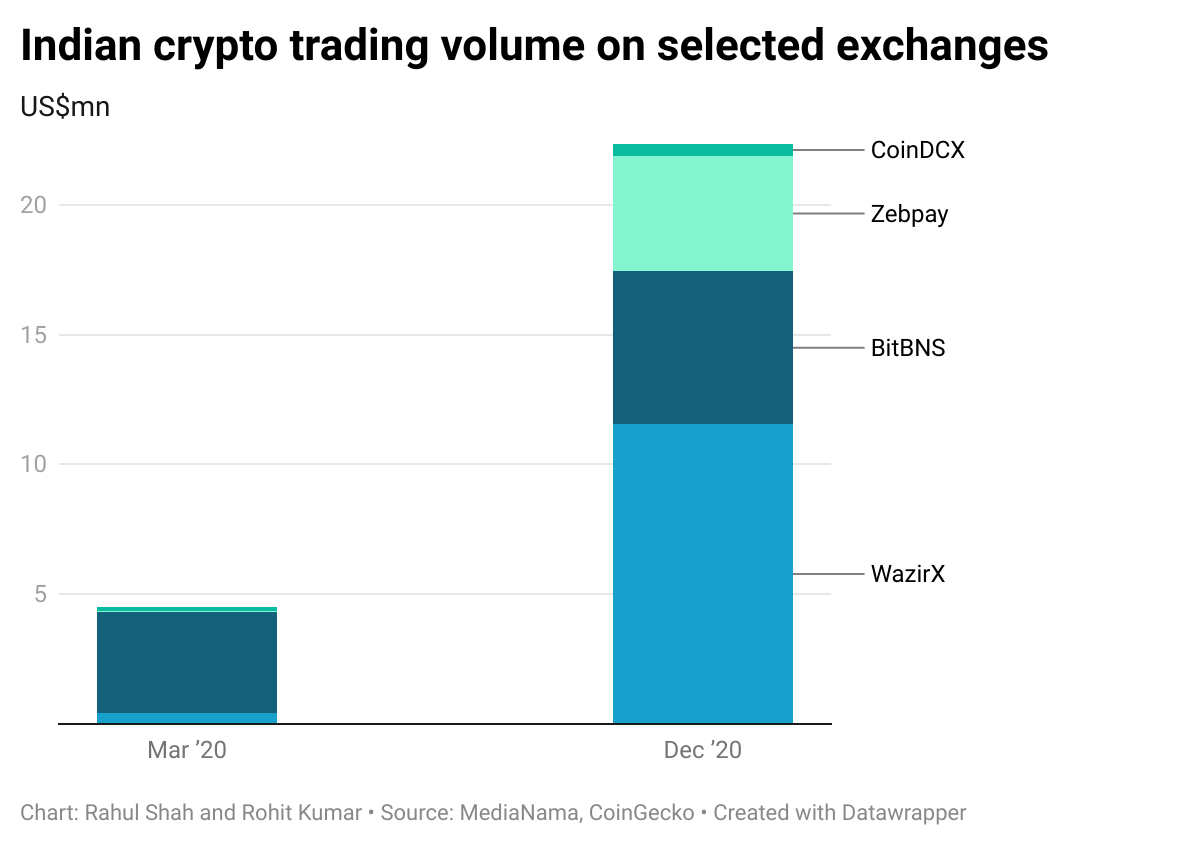 The latest CBN move diverges from Nigeria's Securities and Exchange Commission (SEC) directives last year that sought instead to regulate the activities of cryptocurrency participants.

Despite the new restrictions, Nigerians are still finding ways to trade cryptocurrencies; the country is one of the more active markets globally.

An environment of growing transaction volumes, and the experience of other emerging markets, suggests tighter regulations are on the horizon.