EM credit sold off sharply in the wake of Russia’s invasion of Ukraine, with the JP Morgan EMBI spread widening over 100bps in the ensuing weeks to a peak of just over 450bps. But, miraculously, spreads recovered fully to pre-invasion levels by the beginning of April.

We expressed surprise at the resilience of EM assets given the volatile cocktail of war, rising commodity prices, slowing global growth and a historically aggressive Fed hiking cycle. 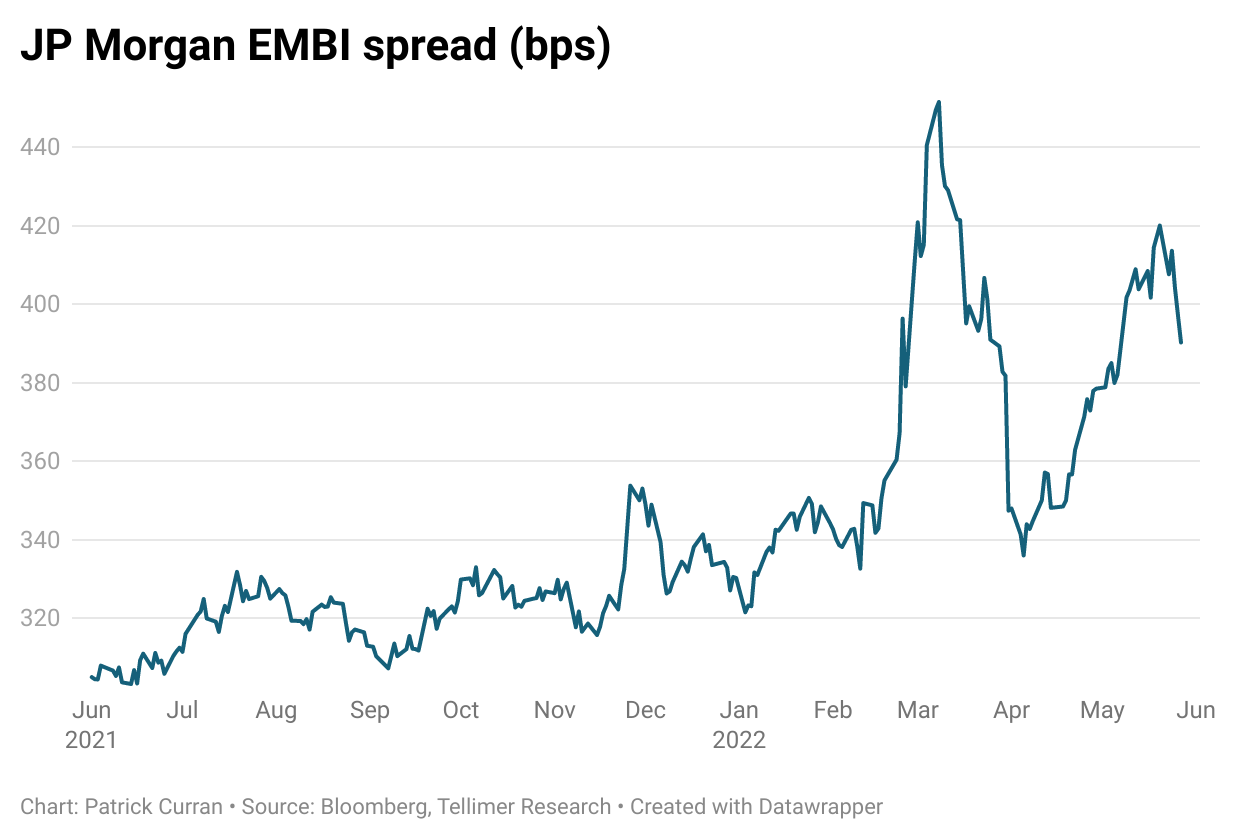 Indeed, EM credit began to capitulate from 5 April onward, with the EMBI spread widening by over 80bps to reach 420bps on 20 April. At the time, we were on a client trip in New York, Boston and Washington, DC, and many of our conversations were aimed at gauging whether or not the EM sell-off still had legs or if it had created an interesting opportunity to go overweight on EM credit.

We said that EM credit would likely remain vulnerable through year-end given uncertainty surrounding the magnitude and pace of the Fed hiking cycle and the associated risk of recession if the Fed was forced to react more aggressively than anticipated to rein in inflation. But we also said that the sell-off had likely created Buy opportunities in higher-yielding credits that had borne the brunt of the sell-off and may have seen spreads outstrip fundamentals (we flagged Egypt, Pakistan and Kenya).

Since 20 May, spreads have rallied sharply, with the EMBI spread falling from 420bps to 390bps on 27 May (still 60bps wider YTD). And, as expected, it is the credits that sold off most in the recent sell-off that have rallied the most, with each additional 100bps increase in spreads from 31 December to 20 May translating to an additional 19bps decrease from 20 to 27 May (r2 = 62% and confidence level = 99%). 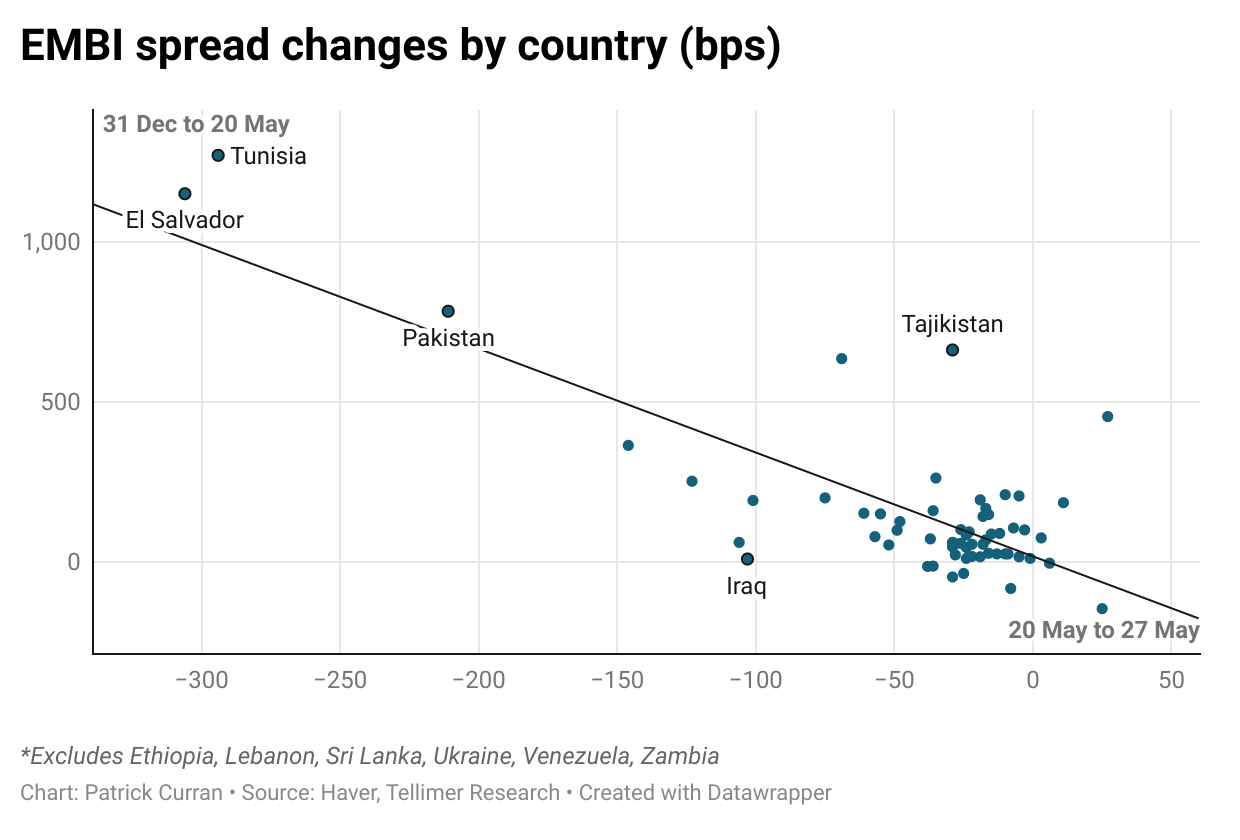 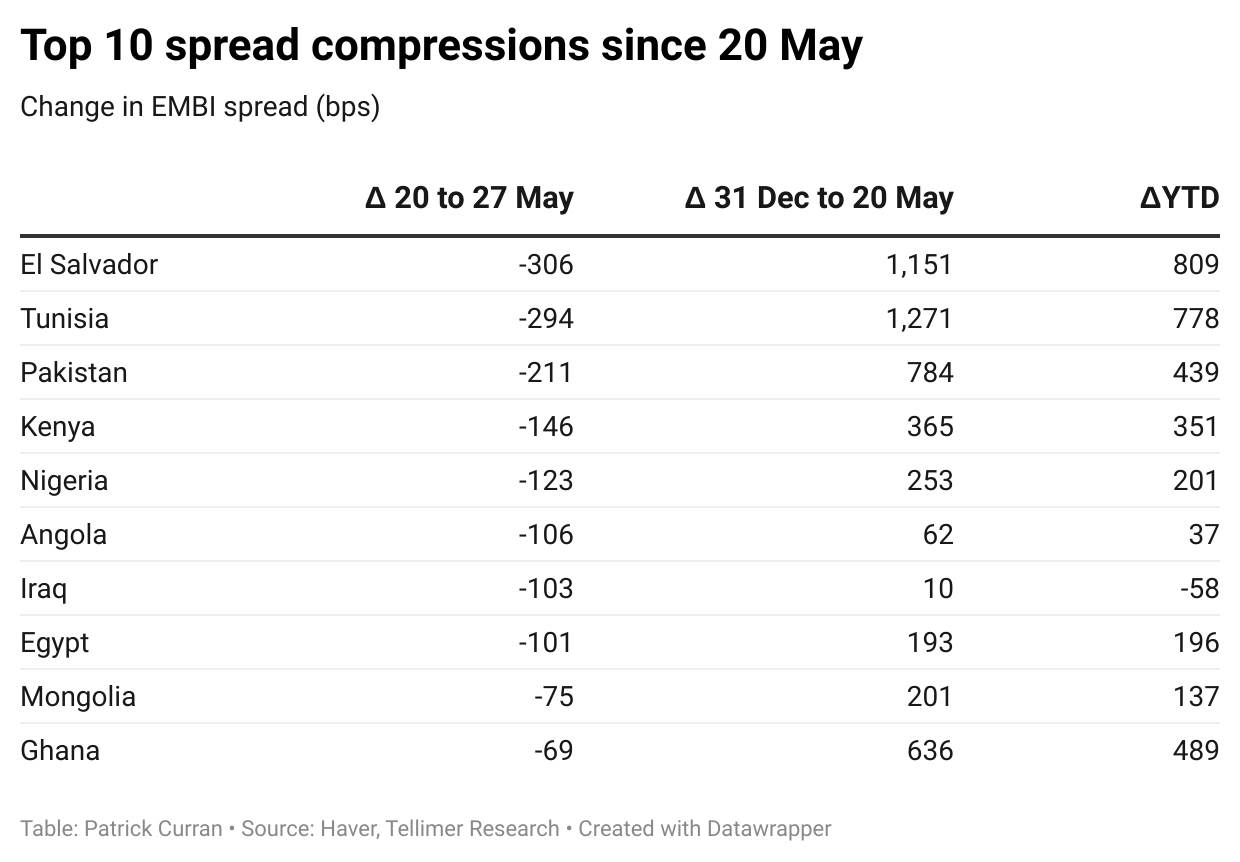 On this point, the jury is still very much out. Risk aversion has declined over the past week, with markets seemingly more confident in the Fed’s ability to engineer a soft landing that brings down inflation without causing a recession. That said, there is still ample space for inflation surprises or policy mistakes, which could pass through to a more disorderly hiking cycle and spell trouble for EM assets.

Markets are pricing the fed funds rate at c2.75% by year-end, the same magnitude as recent Fed hiking cycles at twice the pace. But even this only brings the policy rate to a roughly neutral level, and further hikes beyond this could very well be required to tame record-high inflation if supply-side pressures prove more persistent than anticipated and/or inflation expectations become unsettled.

Further, a neutral policy stance by definition does not weigh on demand-side pressures, which are likely a material contributor to inflation in the US and may call for a tighter stance to tame inflation, supply-side issues aside. And, if the US and/or other developed markets do slip into recession as a result of the policy tightening, EM assets are sure to suffer.

The risk of distress has also risen across many emerging and frontier markets, with the IMF estimating that 60% of low-income countries are either at high risk of or in debt distress. So, for many countries, the sell-off may be justified, and credit spreads more generally are unlikely to return to the subdued levels seen earlier this year (and certainly not pre-Covid levels).

In short, the recent rally has helped to correct some of the overshooting in some higher-yielding credits that were particularly hard hit in the sell-off that began in early April. That said, it is not clear whether or not the rally will be sustained, with numerous sources of risk on the horizon that are likely to lead to continued volatility in EM assets through year-end.

For those investors who think the recent rally has gone too far, it is best to avoid higher-yielding credits, which have tended to feel disproportionate pain in the recent sell-offs. Conversely, if global risk sentiment continues to improve, then higher-yielding credits are likely to outperform, barring those that are experiencing idiosyncratic domestic crises (like Sri Lanka pre-default, and Ethiopia and Tunisia now).