Oil has steadied this morning following another rally yesterday, which took the price back towards the $115 per barrel level when looking at the front-month Brent contract. WTI is not far behind and has eroded a lot of the discount we normally have seen compared to Brent. Driving the gains for crude is the fact that key product markets are still running hot, especially in the US, with the likes of gasoline and diesel prices reaching new record highs at the pumps. The US is entering its traditional driving season now, and with refining capacity across the country still limited, prices for fuel are surging in anticipation of the higher demand. Demand in China may also start to pick up again as Shanghai has reported no new COVID cases over the last three days, a milestone that many believe will allow the authorities to ease some of the stringent restrictions. It will, however, take some time for this situation to normalise, given that many restrictions remain and general mobility will still not be free in the municipality. Therefore, we still see oil prices as being capped at the moment given how elevated they are, unless another major supply shock hits.

Cameroon: Finance Minister Motaze yesterday launched a roadshow for the country’s 6th bond issue. The Cameroon government is seeking to raise CFA 200bn on the unified financial market of Central Africa (Bvmac) for infrastructure projects. The roadshow will be conducted in Cameroon, Gabon, and Congo. Cameroon, which used to offer interest rates below 6% on the local financial market, is now offering 6.25% per annum, for a maturity of 7 years (including a 2-year grace period), also longer than the usual five years.

Egypt: Prime Minister Mostafa Madbouly has indicated that Egypt is seeking billions of dollars in private sector investments and will set new policies on government ownership as it moves to boost the economy battling the shockwaves of the war in Ukraine. According to Madbouly, officials are in discussions with Gulf nations on converting part of deposits they've made in Egypt into investments, while stakes in two army-owned firms and ten other companies will be offered on the stock market by year-end. The government will also announce its policies on public ownership, which may see the state lessening its involvement in some sectors and completely exiting others by the end of May. Madbouly also noted that Egypt's sovereign wealth fund is seeking investors for about $9bn in assets.

Egypt: Data from the central bank of Egypt showed that expatriate worker remittances rose to $3.3bn in March compared to $2.9bn in the month prior. Meanwhile, July-March remittances reached $23.6bn. Note that Egypt was ranked fifth among the world's top recipients of remittances in 2021 by the World Bank. Egypt received $32bn, and the World Bank forecasts remittances to grow by 8% in 2022. Remittance flow are of great importance to Egypt in offsetting persistent shortfalls in external and fiscal accounts.

Kenya: The National Drought Management Authority yesterday reported that a worsening drought had left 3.5mn people in need of food aid in Kenya. The number of people facing hunger has increased from 3.1mn in February. According to the state agency, the drought is the worse in 17 of the 23 counties classified as arid and semi-arid, as the state of vegetation worsens and the health of livestock deteriorates. The agency added that prices of corn, a staple in Kenya, are above the long-term average and are still rising due to the depletion of stocks. The worsening drought is likely to compound food price inflation in the economy and overall inflation, which has edged closer to the top of its target range.

Kenya: With gasoline prices surging to a record high in the latest monthly review, Kenya's May inflation may accelerate further despite the use of a fuel subsidy. According to the Energy and Petroleum Regulatory Authority, a litre of gasoline will retail at KES 150.12 ($1.29), while diesel prices increased 4.4% to KES 131 per litre. The state agency added that "the government will utilize the petroleum development levy to cushion consumers from the otherwise high prices." Note that this is the highest fuel has touched since Kenya began setting the price of gasoline, diesel, and kerosene in December 2010. Rising fuel prices and food prices have been a leading contributor to price growth in Kenya. The latter's effects have, however, been contained by a stabilization fund that has seen consumers pay artificially low prices.

Nigeria: In a move that may help boost trading by giving more clarity in the sector in a country that already ranks as among the biggest markets for digital markets, Nigeria has released new rules for digital assets. The SEC said that it has published "rules on issuance, offering platforms and custody of digital assets." The new rules cover the issuance of digital assets as securities, the registration of platforms and digital asset custodians, exchanges, and virtual assets service providers. The move also marked a softening of stance after the central bank last year ordered commercial lenders to stop transactions or operations in cryptocurrencies, citing a threat to the financial system.

Nigeria: Headline inflation in Nigeria surprised to the upside in April, coming in at 16.8% y/y from 15.9% y/y in March. This was the fastest pace of price growth in the economy in eight months and surpassed consensus expectations of 16.4% y/y. The acceleration in April was underpinned by the cost of gas and food items as bread and cereals climbed on the back of surging global commodity prices.

Coffee is Uganda’s biggest export commodity and, therefore, a large contributor to hard currency inflows into the country. With this in mind, it is therefore worth looking at the latest coffee export numbers. Monthly data released by the Uganda Coffee Development Authority (UCDA) showed that coffee exports dropped by the most in over five years in April after a drought lowered crop yield. Specifically, coffee exports declined by 24% from a year earlier to 407,762 bags following scarce rainfall in some robusta-producing regions. That’s the biggest slide since the 27% decline in September 2016. Note that the UCDA  in February lowered its outlook for production by 17% to 9.1mn bags in the year through September. The crop in the country is primarily rain-fed with minimal irrigation. 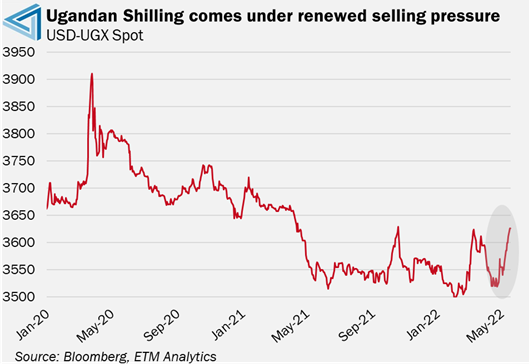 The fourth straight monthly drop in April is set to weigh on dollar inflows and present further headwinds to the Uganda Shilling, which has recorded losses of almost 2% on a year-to-date basis against the USD. Much of the weakness in the UGX has stemmed from negative sentiment amid the war in Ukraine and strong dollar demand from importers in the manufacturing sector. Increased dollar demand from fuel importers has added to the headwinds facing the UGX.

In addition to the challenges mentioned above, tightening financial conditions as the Federal Reserve embarks on an aggressive tightening cycle and a growing debt burden suggests that the UGX is likely to remain on the back foot in the near term.

Nigeria’s high debt servicing costs are partly a function of the massive fiscal premium demanded by investors for holding Nigerian sovereign debt. Adding to this is Nigeria’s inflation problem. Headline inflation in Nigeria stood at 16.8% y/y in April, underpinning bets that the central bank will have to raise rates in the months ahead despite mounting growth risks. The Central Bank of Nigeria’s benchmark interest rate currently sits at 11.5%, notably higher than South Africa’s benchmark interest rate, which sits at 4.25%. This partly explains why Nigerian bond yields are trading well above their respective South African bond yields. 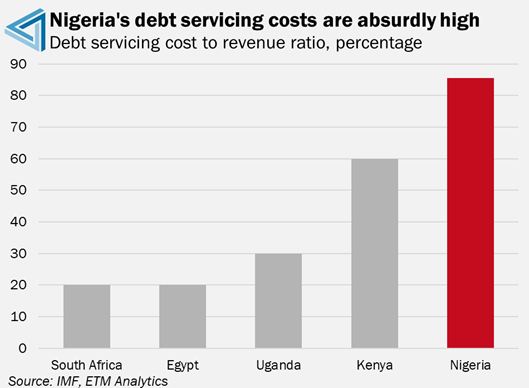 Nigeria’s high debt servicing costs are also crowding out the government’s ability to spend in other areas of the budget, including health care, education and growth supportive infrastructure projects. The lack of available funds for infrastructure spending in the budget is one of the main factors constraining growth in Africa’s largest economy. In recent years, Nigeria's weak growth and poor tax laws have resulted in low tax revenue. This is another factor contributing to Nigeria’s high debt service to revenue ratio.

Looking ahead, unless the government is able to lower its debt service to revenue ratio, investors will continue to demand a massive premium for holding Nigerian bonds. One of the ways in which Nigeria could do this is by generating higher revenue like South Africa, Ghana, Kenya and Angola. While the government has announced plans to implement measures to increase and diversify revenues, tax reforms have been slow and not bold enough. Therefore, until meaningful tax reforms are implemented, fiscal risks in Nigeria will remain elevated.

Given Africa’s dependence on food imports from around the world, the continent is highly sensitive to the global food supply crisis. A new study conducted by Oxford Economics found that soaring international food prices will hit Africa the hardest. In addition to the continent’s dependence on food imports, African countries have heavier weightings of foodstuffs in their respective consumer price index baskets.

The impact of higher international food prices and mounting supply chain pressures will result in more than just higher inflation as calls for food subsidies, such as those in Egypt, will be heeded, putting pressure on the fiscus, or disregarded, resulting in social unrest. History shows that during periods of elevated food prices, social unrest/fatalities of terrorism have spiked. 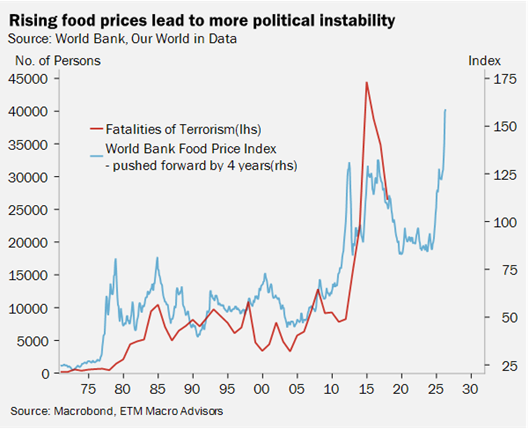 Higher fuel prices and shipping costs, soaring fertilizer prices, and other supply chain bottlenecks like a shortage of truck drivers and shipping containers on the back of extreme weather conditions are pushing food prices to record highs. According to the UN’s Food and Agriculture World Food Price Index, international food prices were buoyed at the second-highest level on record in April.

On a year-on-year basis, the FAO World Food Index was up almost 30% in April, driven in part by supply issues related to the ongoing war in Ukraine. The expected loss of exports from the Black Sea region has exacerbated the already tight global availability of staple foods such as wheat. Oxford said in its report that Kenya and Egypt are providing support despite concerning fiscal trends. Tunisia and Ghana are unable to provide significant fiscal support, running the risk of social unrest.

The report noted that there has been an increase in social unrest in South Africa, Morocco, Tunisia, and Ghana, while the fear of unrest has guided policy in Nigeria and Egypt. Oxford Economics highlighted that governments are taking extraordinary measures to cushion the economic blow, adding that fiscal consolidation has taken a backseat. Egypt and Nigeria have delayed plans to scrap food and fuel subsidies. Kenya has extended fuel subsidies, while South Africa has temporarily cut fuel levies and has extended social grants. These measures will undoubtedly have a negative impact on fiscal dynamics in these respective countries.