Friday saw the USD unexpectedly slump the most in some seven weeks following some US consumer confidence data that missed expectations. Ahead of the FOMC minutes this week, the consumer confidence data appears to have moderated expectations of an earlier taper. However, it is just one data release, and it is not hard data like the labour market data or the retail sales data this week would be. Although disappointing, Friday's reaction looks a touch overdone and more likely a function of some position squaring ahead of the main event this week.

The gold price is holding near a one-week high this morning as investors adjusted their views on the Fed taper following a plunge in US consumer sentiment. The University of Michigan released its preliminary first half reading of consumer sentiment on Friday and it plunged to 70.2 from the final reading of 81.2 in July. This is the lowest level in a decade as the US becomes increasingly worried about the spreading Delta variant of COVID-19 and the impact on the economy.

Copper is currently down around 1% in the Asian session printing levels of $9472.00/tonne as we head into the start of the European session. The primary driver of the negative tone this morning is the data out China, namely retail sales and industrial production, both of which missed expectations as a result of the COVID-19 outbreaks and floods disrupting business activities. Fears of the world’s second-largest economy slowing down are not unfounded and will drive much of the tactical price discovery over the next month or two.

Ethiopia: State Minister for Finance Eyob Tekalign was on the wires saying that the National Bank of Ethiopia (NBE) has asked all commercial banks to temporarily suspend providing loans backed by collateral, such as land and buildings. According to Tekalign, the NBE’s directive follows findings that the money is being used on the black market, and the security authorities and the central bank are taking action as part of measures to address the issue. At the time of writing, it was unclear when the order would be effective and whether it affects corporate, personal, or other loan categories. Reports, however, suggest that banks have suspended all lending pending clarification from the NBE.

African oil producers: Oil prices are retreating for the third straight session this morning, when looking at both front-month benchmarks. Some weak data out of China that suggested that the spread of the delta variant is having a notable impact on global economic activity is weighing on the outlook for oil, just as drilling data from the US pointed to increased rig activity. Brent has dropped below the $70 per barrel mark once again as a result, while WTI is trading near $67.75 this morning, testing some key technical support levels that could see it drop back down to $65 if broken.

Ivory coast: Bloomberg on Friday reported that Ivory Coast’s cocoa regulator suspended forward sales for the 2021/2022 season after pre-selling more than 100,000 tons of the mid-crop harvest last week. The regulator is reportedly evaluating the market to wait for higher prices, and there have been some issues selling with the living income differential while the decision has nothing to do with the expectation for the crop size.

Botswana: Botswana has extended the COVID-19 restrictions as the death toll in the country as a result of the virus rises. The President announced the extension of the night time curfew and postponed the opening of schools. President Masisi announced the restrictions in a televised address on Friday. He was quoted as saying the following - "the disease burden is weighing heavily on us, with infections continuing to increase across the country, and precious lives being lost on a daily basis here at home and across the continent," Masisi said. "Our nation has attained the highest prevalence ever." "Interzonal movement continues to be restricted to essential travel only," he said. "Reopening of schools [will] be delayed for a further three weeks, except for those students preparing for their final examinations. The ban on sale of alcohol remains. Curfew will now start earlier at 8pm and end at 4am for the next three weeks, after which there will be a review."

SADC: The 41st Ordinary Summit of the Southern African Development Community (SADC) Heads of State and Government took place over the weekend in  Lilongwe, in the Republic of Malawi. Bloomberg reported that Mozambique's Minister of Foreign Affairs and Cooperation, Veronica Nataniel Macamo Dlhovo, the outgoing chairperson of the SADC Council of Ministers, officially handed over the chair to Malawian Foreign Minister Eisenhower Mkaka at the meeting. Ministry of Foreign Affairs spokesperson Mrs Constance Chemwayi said other items on the agenda included an update on regional economic integration, particularly the status of the implementation of the SADC Industrialisation Strategy and Roadmap.

Nigeria: Speaking at the mid-year Economic Review and Outlook 2021, Hassan Mahmud, Director of the monetary policy department at the Central Bank of Nigeria (CBN), said that if policy changes with exchange rates, insecurity, among other, were addressed effectively, the country would start seeing some optimistic projections into 2021 and the beginning of 2022. Mahmud added that “if the CBN forecasts for GDP growth are sustained, and there is improved vaccination, and the health hazards and lockdowns are not resurfacing, we will see GDP getting close to 3% by the end of 2021. We will also see the inflation number coming down less than 13% by the end of the year and further down to the NBS projection of single-digit by 2022 or the middle of 2022.’’ According to Mahmud, food inflation should also slow substantially if the supply side was addressed and security issues abated.

The final trading session of the week saw the Kenyan Shilling (KES) remain on the back foot for the eighth straight session to close at a more than 4-month low just north of the 109.0 mark. Losses on the day also saw the KES record its fifth straight weekly loss against the USD, the longest stretch of weekly losses this year as concerns about the impact of the coronavirus pandemic continued to weigh on the currency. Note that surging coronavirus infections have heightened concerns of further restrictions on economic activity, which has pressured the KES. 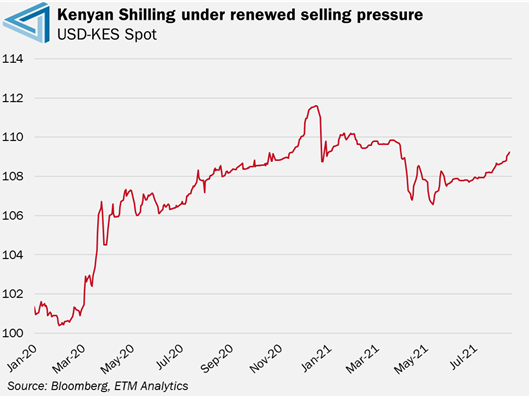 Against this backdrop, it is unsurprising to see the KES down by 0.97% on a month-to-date basis and is the third-worst performing African currency against the USD when looking at Bloomberg’s basket of 23 African countries. Only the South African rand (-1.14%) and Ethiopian Birr (-1.53%) have fared worse. Zooming further out, the KES has shed around 1.24% on a quarter-to-date basis and has underperformed its East African peers, the Ugandan shilling and Tanzanian shilling.

In the week ahead, the KES is expected to remain on the defensive amid increased dollar demand from importers and listed companies preparing to pay dividends to their shareholders. Moreover, prospects of a fourth wave of infections will add downside pressure. 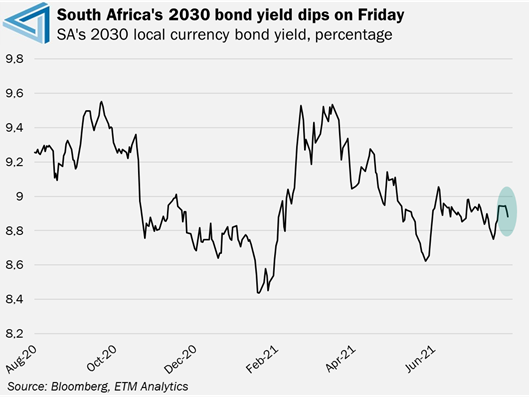 However, on Friday, South African bulls managed to find their footing with both bonds and the ZAR firming on the session after Godongwana pledged fiscal restraint. The main takeaway from Finance Minister Godongwana’s investor conference call on Friday was that no major changes are expected to the government’s fiscal framework. Godongwana said that he would look to continue with previous Finance Minister Mboweni’s policies, with very little changes. He used the call to highlight some of the main threats to SA’s fiscus, which include the public sector wage bill, SOEs, and debt servicing costs. Nothing new here but the acknowledgement of these issues is a positive sign that they may still be tackled in the months and years to come.

The call then shifted to the Deputy Director-General, who stated that SA’s funding mix is already optimised and that no changes are expected there. Borrowing has been concentrated on the shorter-dated part of the curve to keep costs low, but this is balanced with not increasing refinancing risks. The topic of the IMF’s SDR reserves was also brought up, with the officials stating that they will be used to settle certain foreign currency obligations. Finally, it was stated that Godongwana would be meeting with rating agencies following today’s investor call. He is well known among them, with Fitch already stating that his appointment means that there is little chance of a notable shift in policy. In conclusion, Friday’s investor call presented very little new information but helped to assure that no major policy changes are coming from the new Finance Minister.

The big news on the political front is that Zambian opposition leader Hakainde Hichilema secured a shock landslide victory in the presidential election. The results were announced by the Electoral Commission of Zambia’s Chairman Esau Chulu at a briefing early this morning in Lusaka. The official vote count showed that Hichilema received 2.81mn votes against 1.81mn for Lungu. The newly elected President Hichilema has the tough task of righting Zambia’s economy, which has been crippled by years of overspending that saw the country become the first African nation in the COVID-19 era to default on its sovereign debt. The country is also facing soaring inflation, with CPI at nearly 25%. 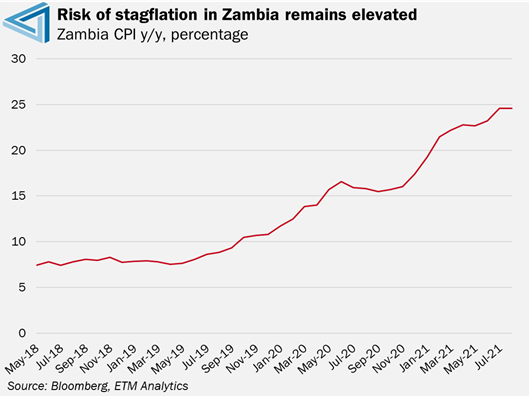 With the results of the election now out that way, investors will watch closely to see if Hichilema is able to strike a much-needed deal with the International Monetary Fund. In recent comments, Hichilema said that he plans to seal a bailout from the IMF as soon as possible and initiate debt-restructuring talks. Hichilema also noted in recent commentary that he could achieve an economic growth rate of more than 10% within five years. The newly elected President plans to revive Zambia’s economy by boosting growth in the mining, agriculture, construction and manufacturing sectors.

If Hichilema is going to be successful in reviving the mining sector, he will have to repair relations with copper miners operating in Zambia. Recall that copper is the country’s main source of foreign currency earnings and one of the biggest contributors to the government’s coffers. Note that relations between the government and copper producers in Zambia have deteriorated in recent years following a move from the Lungu administration to nationalize Zambia’s copper mines.