GTB held its earnings call yesterday, following the release of audited H1 19 results that were broadly in line with our expectations (see our Q1 19 and Q2 19 earnings review reports). We think GTB's Q2 19 performance was superior to Zenith's better-than-expected results, given the former's more resilient margins, cost/income ratio improvement, and stronger core revenue base.

Five key takeaways from GTB management's comments on the call are:

Management does not consider recent policy directives from the CBN to be draconian, and expects banks to adjust to the changing landscape. There is a possibility that the recently announced LDR benchmark is raised from 60%, but the regulator is unlikely to implement measures that will de-stabilise the sector. For GTB, LDR was above 60% at end-H1 19 if all retail/SME loans are given the 150% weighting, but slightly below the mark at 57% if only new loans written after the CBN's directive was issued are considered. Management expects to be fully compliant before the 30 September 2019 deadline, and does not anticipate NPL pressure for most banks off the back of this.

On the currency, management has no expectation for a near-term NGN devaluation, and finds the current FX reserves level to be adequate for the CBN to continue to support the currency. With a net long US$ position of cUS$1bn, the bank is well-positioned against any currency weakness.

The stock is down 23% ytd and, when asked about a possible share buy-back programme, management alluded to having no plans for this.

In addition to cNGN10bn recognised in H1 19 (9% of PBT), management expects to book more loan and other recoveries, reversing some of the significant IFRS 9 provisions made in FY 18. This could amount to up to NGN40bn (of the NGN100bn hit to retained earnings), which should offset an expected moderation in trading and FX gains, and support earnings in H2 19 and FY 20.

3. The recent slide in oil prices is not yet a concern

Oil and gas assets are hedged at US$55/barrel, and sector exposure is skewed towards the safer upstream segment (57% of sector exposure). A weaker macroeconomic backdrop could also drive NPLs, which appears to be the greatest concern for the bank, although management has comfort over most of the loan book, save for one or two undisclosed exposures, and NPLs provisions coverage was robust at c85%.

Ghana and most other subsidiaries in West Africa continue to perform well, with ROEs in the 17-37% range. Ghana remains the largest and most profitable subsidiary, contributing c11% to group PBT, and was more profitable than Nigeria which had ROE of 32.7% in H1 19.

Challenges in East Africa are particularly due to the subsidiaries' weak operating scale. Options for improving performance for the region include fresh capital injection and an acquisition, both of which should help the subsidiaries move from Tier 3 position to Tier 2; it was not confirmed whether an acquisition will be made.

The bank's retail drive delivered a 16% increase in the customer base to 16.4mn in H1 19 and significant increases in e-banking and transaction/account-related income. Cheap deposits contributed 85% to the total, which should continue to support margins as asset yields trend lower; NIMs should moderate from 9.6% in H1 19 to c9.0% for the full year by management's estimation. The bank's low-cost structure should allow it maintain its efficiency leadership over peers, although there is a strong likelihood that AMCON charges remain a headwind over the medium term, considering the sinking fund's weak performance.

For the most part, FY 19 guidance was maintained as shown below, with the exception of the adjustment made for the LDR. 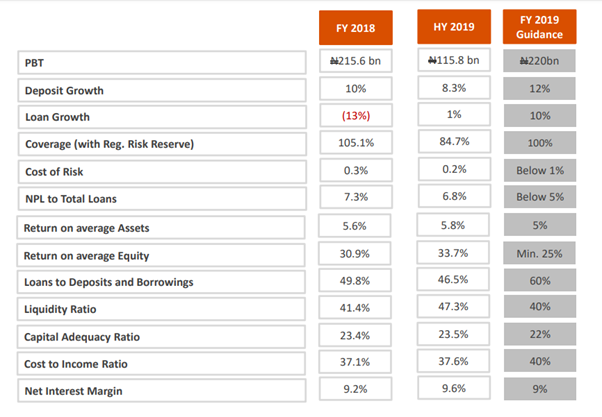 Reiterate Buy rating with an unchanged TP of NGN50.00, suggesting an ETR of 101%. GTB remains one of our top Nigeria bank stocks due to its strong profitability and capital ratios, which we think should be sustainable, as well as its strong digital and retail banking franchise. GTB currently trades on FY19f P/B of 1.1x vs frontier peers at 1.0x.