The Google anti-trust lawsuit in the US looks very similar to the one launched in 1998 against Microsoft although a guilty verdict is unlikely to crash Technology valuations in the manner of the dot-com bubble burst in 2000.

Investors continue to look through these risks and reward mega Technology's superior growth and returns on capital, in comparison with every other sector (a gap widened by Covid-19).

If this lawsuit tips some to worry more about the risks in mega Tech, which have also deteriorated in 2020, then it may create some space for some of the old-fashioned growth available in pockets of EM and FM.

Note that the initiation of anti-trust proceedings against Google follows the recent 450-page report from a US Congressional committee (led by the Democrats), in which Google, Apple, Amazon, and Facebook were alleged to be undermining commercial and political freedom. Technology anti-trust action was one of President Trump’s 2016 election pledges. This suggests that this lawsuit is grounded in a bipartisan consensus and is likely the first of more.

Google anti-trust mirrors Microsoft 1998, but this tech boom not like dotcom bubble

For years, mega Technology companies have grown faster and with higher returns on capital (particularly, in US$ terms), enjoyed wider equity valuation multiple expansion, and attracted greater fund inflows (the amplifying effect of passively managed assets) than old-fashioned sectors in DM, EM, or FM. In many respects, every other part of the public equity universe has lived in the shadow of mega Tech, even within EM-FM with the outperformance of China (mainly software applications), Korea-Taiwan (mainly hardware manufacturers) and small EM-FM Tech (eg Mercado Libre, Sea, Yandex).

The US Department of Justice filed an anti-trust lawsuit against Google's online search on 20 October. In some respects, this is quite a narrowly defined case and is very similar to the case against Microsoft's web browser (Microsoft’s version of the software which ultimately grew into the Google commercial juggernaut of online search, as we know it today). This is not a coincidence. The DoJ expects their chances of success are maximised by mirroring a precedent lawsuit. But the repercussions, whether the prosecution succeeds or not, are much wider because they could presage anti-trust suits against the other titans of US mega Technology, eg Amazon, Apple, and Facebook.

The Google lawsuit may evoke memories of April 2000, when Microsoft's guilty verdict in its US anti-trust case, launched a couple of years earlier, finally burst the dot-com equity bubble. That is likely far too dramatic; at that time, US interest rates were on a hiking cycle (as opposed to the stimulatory environment today and the foreseeable future), many of the most fancied internet companies had no path to profitability (unlike the formidable returns on capital and profit profile of today's Tech titans), and there was no exogenous event like Covid-19 to accelerate Tech adoption (and widen the gap in Tech growth and access to capital relative to all other sectors which have been negatively impacted by Covid-19). 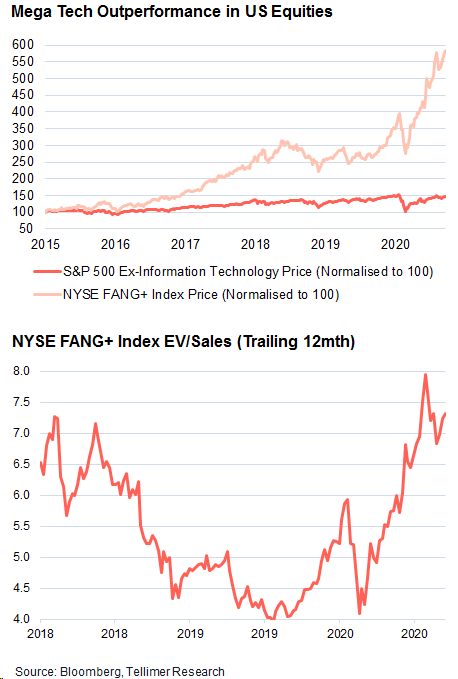 Nevertheless, if the Google anti-trust lawsuit crystallises the start of an era of much tougher US anti-trust scrutiny (likely emboldening regulators elsewhere) then this adds to other risk factors for mega Tech, which have deteriorated this year: 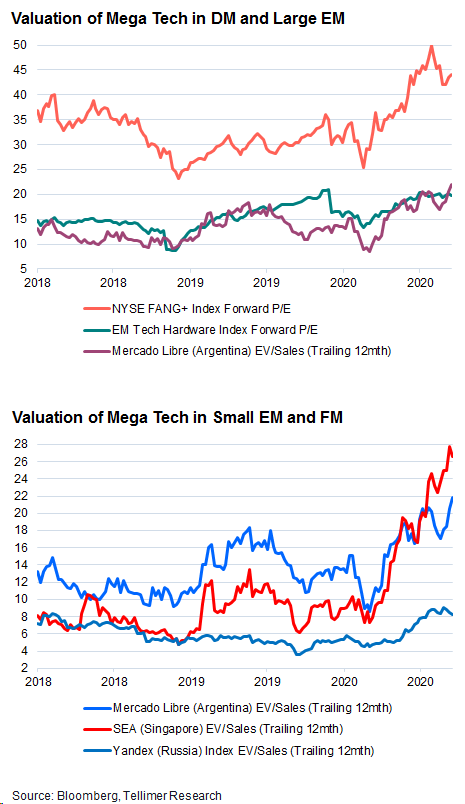 US weaponises all Tech regulation in China friction, EM Tech in the cross hairs (August 2020)