UST yields legged lower yesterday as the market reacted to the FOMC meeting. While the Fed hiked rates by 75bp and sounded quite hawkish regarding its fight against inflation, it did note that the US economy is slowing and that the pace of rate hikes will eventually need to slow as well. Clearly, the market was positioned for a more aggressive Fed, given that 10yr US yields plunged to lows near 2.700% after the meeting, while the 2yr yield fell back below 3.000%. We have seen a bit of a rebound for yields this morning, but overall the bias for USTs remains relatively bullish for now. Focus will now turn to the US GDP and jobless claims data, with any weaker than expected readings there likely to further bolster the rally for US fixed income.

Meanwhile, Australian and New Zealand bonds have joined in on the rally, suggesting that we could see European yields head lower through the course of today as well. Italian bonds, however, will likely continue to underperform after yesterday's credit rating downgrade, suggesting that the BTP-Bund spread could widen even further and start to cause some concern among European policymakers.

Botswana: To combat soaring inflation and help households cope with price increases, Botswana's Finance Minister Peggy Serame announced a reduction in value-added tax (VAT) from 14% to 12%. The reduction in the VAT rate will be for six months, starting in August. Cooking oil and gas prices will be zero-rated for VAT over the same period, while the allowances for university students at public institutions will be increased by 18.5% from September. The government will also give BWP 120mn to the state-owned Botswana Meat Commission to assist farmers. Serame was quoted as saying," We expect retailers to pass on these VAT reductions to consumers." The interventions will be reviewed after six months and are expected to cost the government BWP 1.8bn. The International Monetary Fund has said that the Bank of Botswana will need to raise interest rates further to bring inflation back within the 3% to 6% target range.

Ethiopia: To help the country respond to a prolonged drought that is threatening the survival of 8.1mn people, the US has granted Ethiopia $488mn in humanitarian assistance. According to the US Agency for International Development, the funding will target about 7.4mn people in need of immediate food assistance, and part of the money will also go to helping more than 4.7mn children under five years of age and at risk of malnutrition this year. The war in the Northern region and a prolonged drought have crippled Ethiopia's food production. This has been exacerbated by the war in Ukraine, which has made key imports like wheat and fuel pricier.

Mozambique: To bolster Mozambique's post-Cyclone Idai and Kenneth Emergency Resilience and Recovery Program, the African Development Bank has granted the country additional funding to the tune of $5mn. The funding is under the lender's African Emergency Food Production Facility and aims to build the resilience of Mozambique's food systems in response to the current global food crisis exacerbated by the war in Ukraine. The funds will be drawn from the Africa Development Fund, the AfDB's concessional window and the $5.6mn grant will provide certified climate-adapted seeds, fertilizers, and extension services, facilitate modern inputs to farmers, and support policy reforms.

Nigeria: A Bloomberg report quoting a source close to the matter suggests that an oil pipeline hauling 180,000 barrels a day across Nigeria has ceased transporting crude since mid-June due to theft. The link's capacity is about 15% of Nigeria's most recent average daily output based on Bloomberg's calculations. While Nigeria has tried to stamp out sabotage on its pipeline network in recent years, oil theft remains a chronic problem for the midstream system known as the TNP. An industry union this year reported that producers received as little as 5% of crude volumes pumped through the pipeline between October 2021 and February. It reflects a larger issue for Nigeria, which is facing shrinking investment and hasn't been able to meet its OPEC+ oil-production quota in order to benefit from a surge in prices and bolster its foreign exchange earnings.

Uganda: Trade data from the Finance Ministry's monthly economic performance report showed that Uganda's trade deficit widened by 21% m/m to $278.1mn in May. The widening of the trade deficit was attributable to an increase in the import bill that more than offset the increase in export receipts during the month. Imports rose 11% m/m to $635.5mn, driven by an increase in goods by the private sector, while exports rose by 3.8m/m to $357.37mn in May on the back of increased earnings from commodities such as coffee, tobacco, cement. A persisting trade balance deficit has, in part, weighed on the Ugandan shilling, which has lost over 8% YTD against the USD.

Amid worsening dollar scarcity, the Nigerian naira in the parallel market has fallen to successive record lows this year. Yesterday, the naira weakened to another low of NGN670 per dollar in the parallel market, with further pressure stemming from Nigerians’ accumulating demand for cryptocurrencies to shield assets against a weakening naira. That represents a premium of around 58% over the official close just north of NGN425.00. 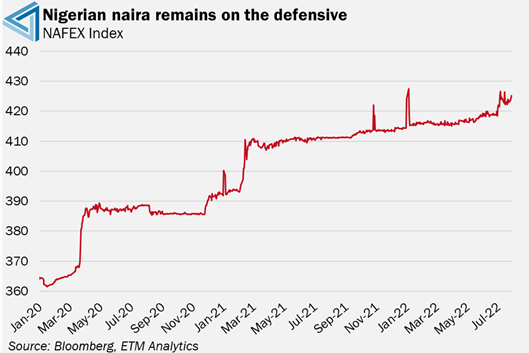 Nigeria has operated several exchange rate systems, including the official rate, which the Central Bank of Nigeria manages (CBN), and the unauthorized parallel market, which is largely determined by demand and supply. However, the crypto exchange rate has emerged as Nigerians increasingly accumulate digital assets due to the scarcity of local currency from official sources. With many people purchasing cryptocurrencies due to a loss of confidence in the naira, the USD rate on the crypto floor is being used in determining the value of the local currency, according to the President of the Association of Bureau de Change Operators of Nigeria.

Although the CBN has banned financial institutions from facilitating crypto trade, many Nigerians still exchange digital currency in the peer-to-peer market where transactions are priced in dollars. Demand for dollars to purchase digital assets has therefore risen. Yesterday, the USD was reportedly quoted at NGN687.6 for peer-to-peer transactions, providing an indication that the naira could weaken further in the parallel market. Further weakening could see the CBN intervene with the risk of another devaluation present.

Egyptian Eurobond yields continue to surge as the fiscal outlook for the country deteriorates. Egypt’s 2027 Eurobond yield has more than doubled since the start of the year, climbing to almost 17%. This is more than 600bps higher than the peak levels seen during the Covid-19 outbreak in 2022. Moreover, at these levels, Egypt’s Eurobonds are trading in distressed territory for the first time since 2020. 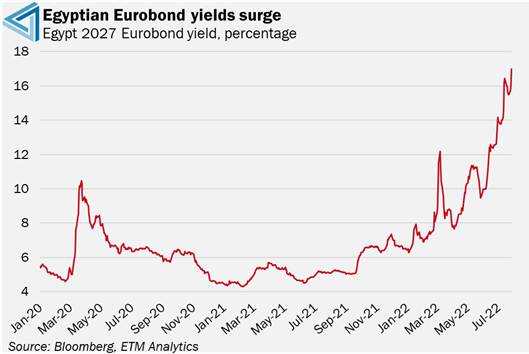 While fiscal risks have risen sharply in recent months, partly due to Egypt’s sensitivity to the war in Ukraine, it must be noted that Egypt’s government has shown that it is committed to fiscal reform. That said, the International Monetary Fund said yesterday that Egypt needs to implement deeper reforms as it seeks another loan. According to the IMF, the Egyptian government needs to take further steps to foster private-sector development, improve governance and reduce the role of the state.

The IMF added that Egypt requires “decisive progress on deeper fiscal and structural reforms” to boost the competitiveness of the economy and make it more resilient to shocks. While acknowledging the government’s goal of bolstering confidence through a stable currency, the IMF said that “greater exchange rate variability during the Stand-By Arrangement could have been entrenched to avoid a buildup of external imbalances and facilitate adjustments to shocks.”

The comments come a day after President Abdel-Fattah El-Sisi called on the international community for financial aid. The President said that the financial assistance would go to families most in need and people on lower pensions and state administration salaries. While Egypt has found itself in a gloomy fiscal position, we are of the view that the country is still some way from being at risk of default. However, we would be cautious toward Egyptian bonds until there is more clarity on the fiscal outlook for the country.

The Central Bank of Kenya decided to leave its key rate on hold at 7.50% on Wednesday even as inflation continues to surge and major central banks such as the US hike rates aggressively. The CBK’s decision to leave its key interest rate on hold means that real interest rates in Kenya sit at -0.40% and continue to fall deeper into negative territory if inflation quickens in the months ahead.

The decision to leave rates on hold was largely driven by increased concern over the deteriorating global economic outlook, reflecting the adverse effects of the ongoing war in Ukraine, continuing pandemic-related disruptions, and supply chain challenges. The CBK highlighted in its statement that growth in the domestic economy remains robust. The central bank added that leading indicators of economic activity showed continued strong performance in the second quarter of 2022, supported by strong activity in transport and storage, wholesale and retail trade, construction, information and communication, and accommodation and food services. 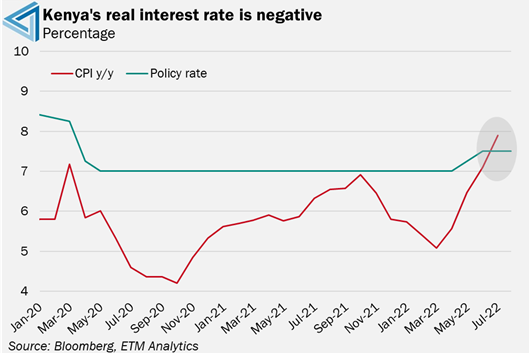 While inflation risks are skewed to the upside, the committee noted that the risks are contained in part due to the measures implemented by the government to stabilize fuel prices, lower electricity tariffs, and subsidies on fertilizer prices. The CBK added that the recent waiver of import duties and levies on white maize, the subsidy on retail prices of sifted maize flour, and the recent reduction in VAT on LPG would further moderate domestic prices.

The committee argued that its action of tightening monetary policy in May was timely in anticipating emerging inflationary pressures, and its impact was still transmitting through the economy, adding that there are also fiscal measures to moderate the prices of specific items. Furthermore, the committee noted that international commodity prices have moderated. That said, it is worth pointing out that currency passthrough risks remain robust with the shilling under considerable pressure. The decision to keep rates on hold yesterday would’ve added to the headwinds facing the KES.