Against the JPY, the USD surged to a fresh 24yr high as it responded to the higher-than-expected inflation data released yesterday. With investors now speculating on the possibility that the US Fed will lift rates by 100bp next week, the risk is that the USD appreciates even further against currencies whose central banks cannot follow. The ECB, BoE, BoJ and PBoC will not hike rates by that margin, if at all. It holds the potential to keep the USD on the front foot, and the depreciation of those currencies will likely translate into more buoyant inflation for longer in those economies. So long as the Fed hikes rates this aggressively, it will keep global rates elevated for longer through the currency transmission mechanism. For now, the EUR has slipped back below parity, while the GBP has backed away from 1.1700 and is threatening levels back towards 1.1500.

Africa: According to the African Development Bank (AfDB), Africa is losing around 5-15% of GDP growth due to the effects of climate change and is facing a gaping climate finance shortfall. African nations received around $18.3bn in climate funds between 2016 and 2019 and are now facing an almost $1.3trn climate finance gap for the 2020 to 2030 period. According to the African lender, the required funding reflects the crisis, and “investing in climate adaptation in the context of sustainable development is the best way to cope with climate change impacts.” Africa has been hit disproportionately hard by the fallout from climate change which has aggravated droughts, flooding, and cyclones across the continent in recent years.

Angola: Headline inflation in Angola slowed further in August, coming in at 19.78% y/y from 21.40% y/y in the month prior. That was the slowest pace of price growth in the economy since March 2020, and the first time in more than two years, inflation has dropped below 20%, with a firmer Angolan kwanza helping curb price pressures. The kwanza has been the second best performing African currency against the USD this year. The continued deceleration in inflation could pave the way for the Bank of Angola, which forecasts inflation to fall below 18% by the end of the year, to start cutting interest rates. Cutting borrowing costs will make Angola a global outlier as price gains accelerate in many countries across the world.

Kenya: A week after the Constitutional Court rejected a challenge on the election outcome by Raila Odinga, William Ruto was sworn in as Kenya’s fifth president. Ruto must now confront an economic crisis in Kenya with food and fuel prices surging, high unemployment, and soaring public debt. One of the key takeaways from his inauguration speech was that the fuel subsidy is uneconomical, suggesting he supports doing away with the subsidy, which has placed pressure on the government’s already strained finances. According to Ruto, taxpayers have so far spent KES 144bn on the intervention that will cost KES 280bn for the fiscal year ending June 2023.

Nigeria: To protect against erosion of its profit margin by rising operations costs in its home market, United Bank for Africa Plc plans to increase its lending rates by up to 400bp. The Nigerian-based lender has a footprint in 20 African countries, and according to the bank’s CEO, the repricing of loans will affect all corporate, commercial, and personal banking credits. The new rates will put further pressure on Nigerian companies, which already face some of the highest lending costs on the continent. While UBA does not publish its lending rates, the average rate for Nigerian bank loans was 12.1% for top-rated corporate borrowers in July, while riskier borrowers paid 27.6%, according to the latest data on the Central Bank of Nigeria’s website.

Uganda: Finance Minister Matia Kasaija has said that the government is seeking to boost revenue by 16.6% to UGX 29.78trn in the fiscal year 2023-24 from a projected UGX 25.55trn in the current fiscal year. The target for 2023-24 tax revenue will be UGX 27.77trn, while non-tax revenue is around UGX 2trn. The revenue target is 14.6% of GDP compared with 14.1% in the current year. Meanwhile, domestic borrowing is set to be limited to 2.2% of GDP in the medium term and will reduce to 1% of GDP in the long term.

Egypt’s trade deficit narrowed by 12.4% y/y to $3.21bn in June 2022. This was the second consecutive retreat for the country’s trade deficit after it registered a 35.8% y/y fall in May. A breakdown of the data from CAPMAS showed that the narrowing resulted from a more pronounced fall in imports than exports. Imports fell 7.7% y/y in June to reach $6.96bn, driven by the decrease in imports of iron and steel, pharmaceutical products and soyabeans. Meanwhile, exports fell 3.3% y/y to $3.75bn in June on lower exports of fertilizers, pasta and food preparations. 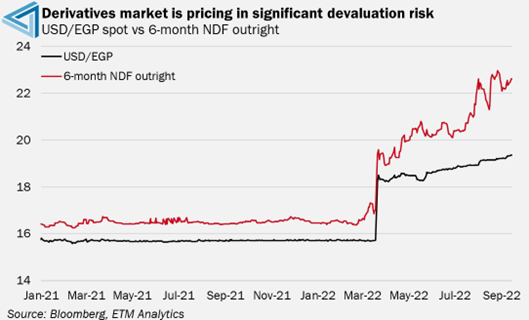 While the trade account reading improved in June, Egypt continues to run a trade deficit which will detract from the current account balance and, by extension, the currency. Persisting trade and current account deficits have left Egypt vulnerable to unfavourable shocks, as witnessed by Russia’s invasion of Ukraine. While the CBE devalued the Egyptian pound in response to boost the competitiveness of its exports and position itself for a loan from the International Monetary Fund, the devaluation has not been enough to offset high commodity prices and the flight of capital flows.

Given that these macroeconomic imbalances remain and the Egyptian pound remains overvalued on a real effective exchange rate basis, devaluation risks continue to rise. For context, the forwards market is pricing in for significant pound depreciation when looking at the 6-month tenor. The 6-month EGP non-deliverable forward is pricing almost 17% depreciation.

Fixed Income: Stronger than expected US CPI data triggers a sell-off in bonds

It has been a turbulent week so far for fixed-income markets. While emerging markets kicked off the week on the front foot, the gains were short-lived after the stronger than expected US CPI data triggered a broad-based sell-off in bonds yesterday. Judging by the bold market reaction, Tuesday’s US CPI numbers took investors by surprise. Arguably more troubling than the headline reading was the fact that services inflation rose, driving core inflation higher. 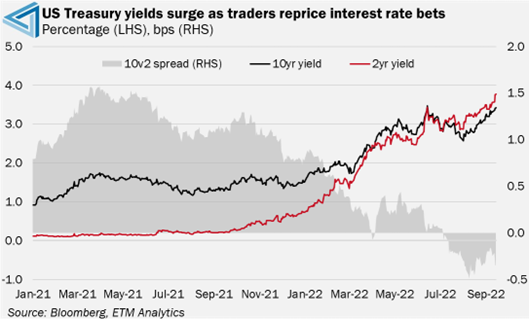 The topside surprise in the US inflation data saw rate traders scale up their bets for another outsized rate hike by the Fed next week. Specifically, Fed fund futures traders are now pricing in almost an 80% chance that the Fed raises rates by 75bps next week and more than a 20% chance that the Fed delivers a 100bps rate hike. Furthermore, it is worth noting that traders increased the probability of a 75bps hike in November from 14% on Monday to 47% on Tuesday.

The repricing of interest rate bets resulted in a spike in US Treasury yields, with the 2yr yields for instance, climbing 18bps to 3.76%, its highest level since 2007. The aggressive moves on the front end of the curve saw the US Treasury curve turn even more negative yesterday, with the 10v2 spread falling to -35bps, reflecting a gloomy outlook for the world’s largest economy. The stronger than expected US inflation data and sharp sell-off in USTs suggest that the headwinds for emerging and frontier market bonds will remain acute in the sessions ahead as traders position for another bold rate hike by the Fed next week.

High fertilizer prices are a major risk for agricultural markets

Phosphate, urea, and potash prices have climbed by around 190%, 170%, and 280%, respectively, over the past two years to historical. Over the past few months, the main drivers of fertilizer have been supply chain disruptions caused by Covid-19, the war between Russia and Ukraine and China implementing restrictions on fertilizer exports. 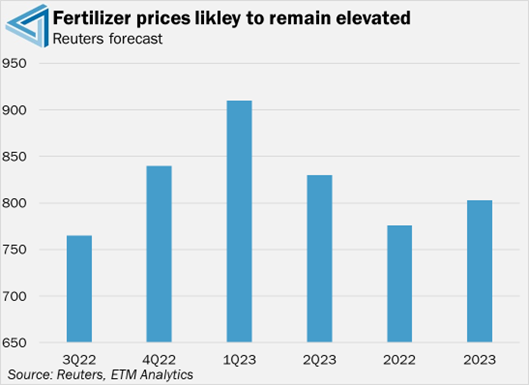 The current turbulent fertilizer market has highlighted the importance of reducing the dependence on Russia for fertilizer, as Russia is the world's largest fertilizer exporter. However, the investments required for the shift away from Russian fertilizer are being hampered by high inflation, supply shortages and uncertainties surrounding the cost of further regulation to decarbonize the industry.

Fertilizer companies purchased their stocks when prices surged to avoid shortages after the war broke out. Therefore, fertilizer producers will be reluctant to cut prices. The higher fertilizer prices, the fewer farmers will buy, which could impact the size of their harvests and create food supply shortages, increasing food prices once again. Risks to fertilizer prices remain titled to the upside unless supplies start to increase swiftly.