US Treasury yields reversed an earlier decline yesterday afternoon following some strong US macro data, reinforcing the outlook that the labour market can withstand tighter monetary policy. The gains for yields were led by the front end once again, with the 2yr returning to its highs not seen since 2007. Swaps were also paid higher, with the market now pricing in more than a 70% chance that the Fed will deliver another 75bp rate hike at its next FOMC meeting. These higher yields and expectations of tighter Fed policy supported the USD once again and pressured risk markets such as equities and emerging market FX.

Notwithstanding NY Fed President Williams' assertions that the Fed is unlikely to quickly reduce interest rates next year and that a lot more needed to be done to reduce inflation on a sustained basis, the USD struggled to sustain its recent gains. The EUR has clawed back some lost ground and, in so doing, triggered some profit taking on long USD positions. Speculation persists that the ECB will match the Fed by lifting interest rates by 75bp. It may prove a tough pill to swallow for the economy, but allowing the EUR to weaken substantially further would also prove counter-productive if it allowed inflation to remain high and become more entrenched. The devastating effects of high and rising inflation are now clearly evident and central banks are coordinating their efforts to ensure that they restore price stability.

Nigeria: In a bid to protect its oil pipelines and curb oil theft, which has contributed to the missing of OPEC targets and an inability to maximize on higher-than-normal oil prices, Nigeria is set to implement a security infrastructure similar to that of Saudi's Aramco. According to the head of the Nigerian National Petroleum Company, the new security architecture will be unveiled soon and will help stop massive oil pipeline vandalism that has resulted in the country losing 30% of its produced volumes to crude thieves. Nigeria has been unable to meet its OPEC quota since the beginning of the year. Recent data from the statistics agency showed that output fell to 1.43mn barrels a day in the three months through June, the lowest quarterly production since 2016.

Zambia: In an Electricity Cost of Service Study by the government of Zambia, power tariffs are projected to rise by 17% over the next five years with state-owned Zesco requiring revenue of as much as $1.4bn a year. The study also shows that Zambia will require $14bn worth of investment to meet projected demand by 2040. Moreover, Zambia is expected to require an additional 4,418 MW of electricity generation by 2040 compared with a capacity of 2,143 MW in 2020, while peak demand is forecast at 8,000 MW by 2030 and about 10,000 MW by 2040.

Ghana: Data from a report published on the website of the Office of the Auditor-General showed that unpaid electricity bills to state utilities contributed to missed revenues of GHS 17.5bn in 2021, a 36% increase from "irregularities" recorded the previous year. According to the report, "Trade debtors, staff debtors, outstanding loans and cash locked-up in non-performing investments" accounted for nearly 60% of overall irregularities, equivalent to $2.9bn at the exchange rate as at December 31. This category includes GHS 6bn ($1bn) owed by customers of state-run power companies, representing 35% of missed revenues for the year. Overall, the report's findings underscore how mismanagement is compounding Ghana's fiscal challenges.

Kenya: Chief Justice Martha Koome laid out the eight questions the Supreme Court will answer when it rules on the disputed presidential election outcome. Recall opposition leader Raila Odinga, who is seeking the presidency for the fifth time, is contesting the result of a tight vote after which the election commission chairman declared Deputy President William Ruto the winner. Some of the questions include whether, the electoral commission's site was hacked, if the polling station returns were interfered with, if Ruto attained the constitutional threshold of 50% plus one of the votes cast and whether any irregularities were substantial enough to nullify the poll. The court's decision on the presidential election is final, and the verdict will be issued on September 5.

Kenya: Chief Executive Office Goeffrey Odundo has revealed that the Nairobi Securities Exchange expects its first main-market segment listing in more than three years to occur before the end of December and boost activity on the bourse. According to Odundo, "we have one application right now that's being processed. It is for the main market segment." That would be the first major deal since 2018, when the Bank of Kigali was listed on the Kenyan bourse and 2014, when the NSE itself made an initial public offering. The exchange has struggled to find listings as more companies preferred to raise funds elsewhere, and investment largely slowed.

Oil: Oil prices gave back all of Monday’s gains and then some yesterday, with traders turning their attention to the rising possibility of a global economic slowdown as central banks remain extremely hawkish in the face of elevated inflation. The front-month Brent contract dropped from over $105 per barrel to below $100, with the large swing suggesting that low market liquidity remains a factor at the moment. Prices have rebounded in early trade this morning, but we are still on course for a third-straight monthly decline for crude, its longest losing streak since 2020.

The bearish bias in the Ghanaian cedi has eased after Ghana received a $750mn loan from Afreximbank to help shore up its dwindling reserves and improve dollar supply in the economy. The loan also comes at a time when a new policy by the central bank to purchase foreign exchange (FX) from mining, oil and gas companies also took off on a positive note after one company sold $20mn to the BoG last week. 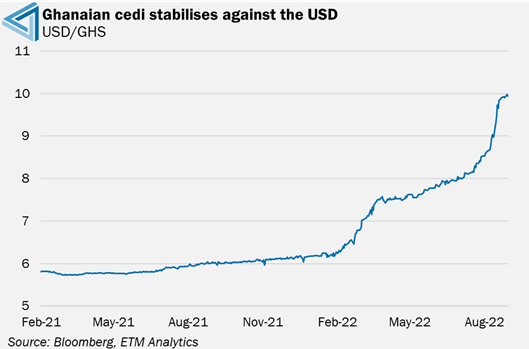 The cedi gained 0.42% against the USD on Tuesday and was among the best-performing African currencies on the session. The cedi could also be in line to benefit from the COCOBOD syndicated loan, with officials currently on a roadshow to raise $1.3bn for the 2022/2023 cocoa crop season.

While the cedi firmed yesterday, the broader bearish remains entrenched, with the cedi ranked as the worst performing African currency against the USD this year, down by 38%. While the combination of the loan inflows, the central bank's dollar buying program, and the inflows from the COCOBOD loan, if realised, will improve FX supply, corporate and offshore demand is set to continue outstripping supply. In addition to a deteriorating macroeconomic outlook, this suggests the broader bearish bias on the cedi may persist in the near term unless Ghana's fiscal dynamics meaningfully improve.

Fixed Income: Ghana’s fiscal woes intensify after it is forced to cancel a bond issuance

While the cedi has stabilised, helping to provide ease some of the fiscal pain, fiscal risk in Ghana remain acute. Investor concerns over Ghana’s fiscal crisis remain heightened, with investors becoming increasingly worried about how the country will fund its budget shortfall. While Ghana has secured a sizeable loan from Afrexim Bank, the country has effectively lost access to the international bond market due to the marked rise in global interest rates and has now been forced to cancel yet another domestic bond auction due to high yields. 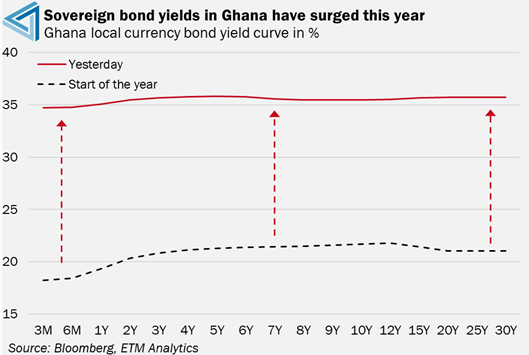 According to Bloomberg, Ghana’s debt issuance office has rescinded its decision on the issuance of its planned sale of 2yr and 5yr cedi-denominated bonds. The decision to cancel the planned auction was primarily due to the increased premium demanded by investors for purchasing the bonds. According to in-country reports, the coupon rate for the 2yr bond was pegged at 21.50%, while the 5yr bond’s coupon was 20.75%.

The jump in yields has not just been contained to Ghana’s hard currency and local bonds, with Treasury Bill rates also surging, which has resulted in significantly higher debt servicing costs for the government. According to Bloomberg data, Ghana’s 3m and 12m T-Bill rates are trading north of 30%, more than 1500bps higher than levels seen at the start of the year.

With major central banks still pressing firmly on the monetary policy brakes against the backdrop of a weak risk appetite, funding pressures in Ghana are expected to remain acute in the near term. That said, the government is pushing to secure more funding from the likes of the IMF. Should the government manage to secure a program with the IMF, it will provide some much-needed fiscal breathing room for the country.

Macroeconomic: Mozambique’s first LNG export to Europe seems to have been pushed out

While Mozambique's fiscal and macroeconomic outlook has improved drastically due to the global energy crisis, which has boosted interest in Mozambique's LNG industry, optimism was tempered yesterday after Bloomberg reported that the vessel destined for Mozambique to collect the country’s first shipment of LNG from the offshore production platform changed course and sailed away.

As mentioned in yesterday's talking points, the tanker, known as British Mentor, had been due to arrive on August 24th at the Coral-Sul floating LNG facility that Italy’s Eni is commissioning. After spending a couple of days drifting off Mozambique’s coast, it changed its destination and started sailing toward Qalhat, Oman, home to another LNG terminal. 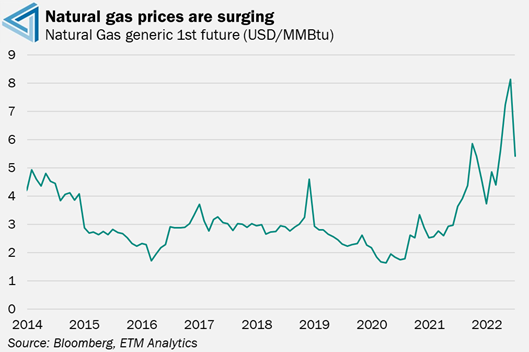 Energy buyers in Europe have been eagerly anticipating production from the LNG plant in Mozambique to try and help ease the global gas shortage as Europe heads into winter. The hopes are that an increase in supply will help to bring some relief to the sky-high gas prices that the world has been experiencing this year.

Eni has said that it will communicate the first export data in due course. However, energy analysts now expect the first shipment to occur in the first half of next year. The main threat to the success of the project is an insurgency in the northern parts of the country. Note that the project has experienced a few delays as a result of the security situation. While the near-term outlook for Mozambique is cloudy, we remain very bullish on Mozambique longer term.