Ghana's fiscal turnaround could take a decade, EMs suffer another outflow in May

A Russian airstrike hit a freight railcar repair factory in the Ukrainian capital of Kyiv, this is after Putin promised to facilitate the export of grain from Ukraine amid a worsening global food shortage and inflation crisis. Some analysts have said they believe Putting is “blackmailing” the world by holding food supplies hostage as part of his war strategy to end sanctions. This news may raise grain prices as supply concerns start to increase again.

Turkey’s foreign minister has said that they support the UN’s plan to ease the global food crisis by restarting Ukraine’s grain exports along the sea but does still require more talks with Moscow and Kyiv to ensure ship safety. However, Ukraine is going to have to de-mine its black sea ports since Russia has already made to necessary commitments. However, Ukraine seems reluctant to do so, as they are concerned Russia will just attack the port as soon as it's been de-mined.

US West Coast ports have experienced at least three months of easing bottlenecks thanks to China's zero-COVID policies, locking down Shanghai, home to the world's busiest seaport, which slowed exports to the US. The reopening of Shanghai's economy and restarting of factories will undoubtedly spur an export wave of backlogged goods to the US, which could spark another round of congestion.

Angola: Speaking yesterday, Bank of Angola Governor Jose de Lima Massano reiterated that the inflation target for this year is 18% and added that the central bank will persist with a tight monetary policy stance to help bring inflation to below 10% by 2024. The Governor was quoted as saying, “we will continue with a restrictive monetary policy. It is premature to have a generic approach of lowering interest rates.” While Angola’s inflation has been falling due to a stronger Angolan Kwanza and prudent monetary policy Massano still views inflation as “relatively high.” Massano added the central bank is now totally centred on ensuring the stability of prices.

Ghana: Inflation pressures remain entrenched in the Ghanaian economy, judging by the May CPI report. Specifically, headline inflation in Ghana surged to the highest level in more than 18 years, coming in at 27.6% y/y from 23.6% y/y in April. Food and transport costs were once again the major drivers of the headline figure. Food prices climbed 30.1% from a year earlier, compared with a 26.6% increase in April. Meanwhile, non-food inflation accelerated to 25.7% from 21.3% in the previous month, with transport costs surging to 39%. Headline inflation in Ghana is more than double the upper ceiling of the central bank’s target of 6-10% and has been above that range for nine months. It is worth noting that the March and May rate hikes may ultimately take time to filter through, and thus inflation may climb further in the coming months, albeit at a slower pace.

Ghana: Ghana has lost its title of being the biggest gold producer on the continent to South Africa. The unseating of Ghana came as official gold production fell to 2.8mn ounces in 2021, a 30% y/y decline. The Ghanaian Chamber of Mines attributed the decline in production to a new 3% tax imposed on small-scale mining in 2019 and added that production dropped by 14% in 2020 due to COVID-19 restrictions. Gold output for 2021 was the lowest since 2008, with net revenue dropping to $4.9bn from $5.1bn in 2020. Falling gold production could deal a blow to the central bank's plans to purchase domestic gold to beef up reserves and prop up the Cedi.

Kenya: Citing disruptions due to a shortage of dollars, Pwani Oil Products Ltd., one of Kenya’s biggest edible-oil producers, has halted operations at its refinery. An official from the firm said that manufacturers are facing challenges “in accessing US dollars used in paying for imports of crucial raw materials.” Several firms on the African continent have reported a shortage of dollars for months amid increasing pressure on domestic currencies. To combat the issue of scarcity, Malawi recently devalued its currency by 25% against the USD.

South Africa: The latest bond ownership data from National Treasury shows that there was a minor rotation out of SAGBs in May. The amount of foreigners holding both vanilla and inflation-linked bonds was recorded at 28.1%, compared to 28.4% in April. That said, it marked the third straight month that foreign holdings of SAGBs declined and the weakest level since July 2011. A breakdown of the holding of the bonds held by the foreign sector showed that the ownership of vanilla bonds edged lower to 32.6% from 33.0% in April. Meanwhile, inflation-linked ownership rose to 4.7% in May from 4.4%. As market volatility picks up amid headwinds such as inflation and rate hike bets and investors become a little more judicious on foreign exposure, risks exist that we could see a more pronounced rotation out of SAGBs in the months to come.

Uganda: President Museveni has indicated that Uganda is seeking a new investor for its stalled phosphate project focused on domestic fertilizer production. Uganda is looking for a new funder after the initial Chinese promoters have struggled with financing for the 300k ton per year fertilizer project. Moreover, progress had halted as the coronavirus pandemic froze access to loans. Domestic output of fertilizer is important to increased productivity in the country, which relies on minimal use of the chemical and irrigation in its agricultural sector.

Forex: Nigeria’s forex reserves decline by over 5% in the five months through May

While oil prices surged by almost 50% in the first five months of the year, Nigeria was unable to take full advantage of the higher prices, with the latest data from the Central Bank of Nigeria (CBN) showing that foreign exchange reserves fell during that period. Specifically, Nigeria’s foreign reserves dropped to $38.48bn as of May 31, 2022, compared to $40.52bn at the start of the year, marking a 5% drop. At $38.48bn, foreign reserves dropped to the lowest level since October 2021. A monthly breakdown of that data showed that foreign exchange reserves dropped by $943.07mn in May 2022, the biggest decline in a month, followed by a $478.95mn decline in January. 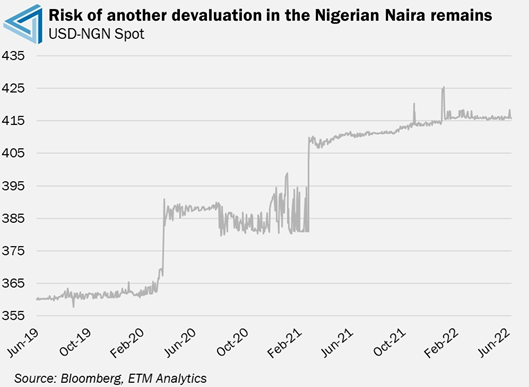 The decline in reserves has been attributed to factors such as an increase CBN intervention in the foreign exchange market to prop up the Naira and dwindling oil production due to oil theft in the Niger Delta. Note that CBN intervention has in part supported the official Nigerian Naira, which has been resilient against the USD on a year-to-date basis, up by over 2.0%. This has made the currency the third-best performering African currency.

While Nigeria’s reserves continue to decline, the CBN has noted that the “current level is still adequate to shield the economy against external vulnerabilities.” That said, it is worth noting that in addition to the headwinds to reserves growth mentioned above, the IMF recently warned that Nigeria’s foreign reserves could fall further in the medium-term on the back of restricted Eurobond market access and higher capital outflows. In the short term, we may, however, see an improvement in foreign exchange reserve levels at the margin, given government efforts to combat theft and pipeline vandalism in the country.

Data published this week confirmed that the rotation out of emerging market assets persisted last month as money managers continued to favour haven assets given the fragile market conditions. According to the Institute of International Finance, emerging market bonds and equities suffered a -$4.9bn capital outflow in May as concerns about a global recession, geopolitical tensions, tighter monetary conditions and inflationary pressures weighed on risk appetite. This comes on the back of a -$4.0bn outflow in April and a -$9.8bn outflow in March. 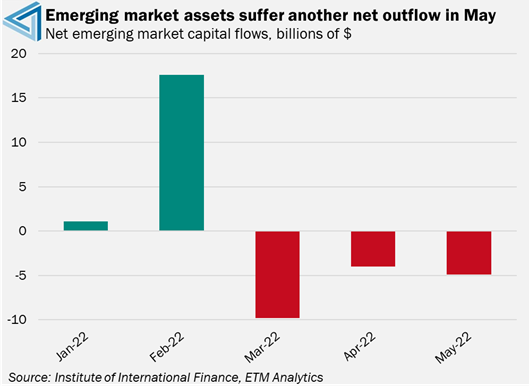 Details from the May Capital Flows Tracker report showed that most of the outflows were from China, which doesn’t come as a surprise as several major cities remained in lockdown. That said, the last week of May saw important inflows into Chinese assets as officials signalled that they would ease lockdowns. Moreover, it is worth pointing out that May saw marginal inflows into Africa and the Middle East ($2.7bn).

While the modest inflows into Africa and the Middle East last month are encouraging, the IIF said in its global outlook report that capital flows to emerging markets are expected to weaken markedly due to the elevated global recession risks. The IIF forecasts that non-resident flows to emerging market countries, excluding China, will fall to $645bn in 2022, from about $1trn last year. It also expects a continuation of recent outflows in China.

However, for Africa and the Middle East, the institute said that it expects a return to strong growth and large current account surpluses, with “a certain degree of resilience on the part of oil-exporting countries despite the challenging global growth environment. Countries such as Angola and Nigeria are benefitting handsomely from the elevated international oil prices. For an in-depth analysis on this topic, see our latest strategy piece titled “Current account dynamics are playing a key role in African currency movements.”

Ghana remains in the spotlight following the meltdown in its bonds and currency in recent months as fiscal risks surged amid concerns that the government may no longer be able to refinance itself in the international bond market. For context, Ghana’s 2032 Eurobond yield has more than doubled since September to trade north of 19%, while the Ghanaian Cedi has depreciated by more than 27% against the USD to trade at its weakest levels on record.

Given the fiscal degradation that has taken place during the pandemic, the extent of the sell-off in Ghanaian assets doesn’t come as a big surprise. S&P Global said in a report published on Wednesday that Ghana’s debt servicing to revenue ratio is estimated to sit at 47%. According to S&P, this is the second-highest level of interest spending globally after Sri Lanka. 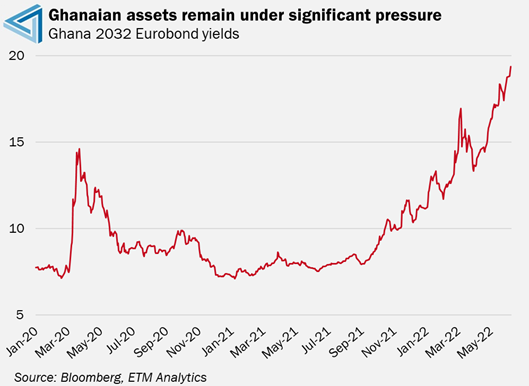 As highlighted by S&P, fiscal tightening remains challenging from a political perspective, given Ghana’s short election cycle and the narrowness of the current administration’s parliamentary majority. Therefore, while the government has shown intention of pushing through with debt consolidation measures and policy reforms, there is a lot of uncertainty as to whether the government has the political capital to deliver on its reform agenda. S&P added that it would require a decade of fiscal tightening, combined with reforms to boost domestic savings and attract more non-debt sources of external financing. Fiscal tightening is set to slow economic expansion to about 4.2% in 2022 before accelerating again and averaging just under 5% in 2021-2024, according to S&P. Debt, meanwhile, could stabilize at 77% of GDP this year if the planned fiscal measures bear fruit, before gradually declining to 75% in 2025.