Industrial metals prices continue to be strung between the specter of insufficient global supply and some uncertainty surrounding the Chinese and European growth outlooks. While the world looks for potential negative stressors that could stifle bullish momentum, US market history suggests that the USD could not be it. The USD is looking a little less likely to rally as was seen in the prior Fed tightening cycle given that it is already quite highly overvalued on a fundamental basis. In the shorter term, note that there have also been some technical issues at the LME, with a power outage meaning that trades cannot be settled on the system according to a recent Bloomberg article. While exchange attempts to return to order, market liquidity could dwindle. Copper prices have been reportedly gaining on other exchanges, up around 0.6% in NY. Whether this bullish momentum continues into the Beijing Olympics is an open question with smelting to halt over the two-week event.

Egypt: Data from the Central Bank of Egypt (CBE) showed that the country's net international reserves rose to $40.934bn in December 2021, an increase of $25mn from November's $40.909bn. The value of FX reserves also increased to $34.056bn from $34.035bn in November 2021. Rising reserves and foreign remittances, in addition to a prudent monetary policy approach by the central bank, translating into a high positive real rate, are factors that have supported the resilience of the Egyptian pound and will likely continue to do so in the near term.

Egypt: Egypt's urban consumer inflation rose to 5.9% y/y in December from 5.6% y/y in November. On a month-on-month basis, inflation fell  0.1%, led by a 1.0% decline in food and beverage prices that make up the largest component of the inflation basket. Despite the uptick in inflation, it remains well within the central bank's target of 5-9% and will likely provide room for policymakers to maintain interest rates early this year, despite pressure on emerging markets to raise rates in light of Fed tapering and expectations for global rate hikes by the end of Q1.

Kenya: The central bank of Kenya (CBK) on Monday said that it would hold its first rate-setting meeting of the year on January 26. Recall, at the last meeting, policymakers decided to keep the benchmark lending rate unchanged, citing "anchored" prices increases and early indications of the economy benefiting from an accommodative stance. Looking ahead, inflation risks are acute as the slide in the currency persists while the drought and emergence of a locust outbreak could push up food prices. As such, we do see risks for policy tightening in the months ahead.

Senegal: The International Monetary Fund (IMF) has completed the fourth review under the policy coordination instrument and the first reviews under the stand-by arrangement and the arrangement under the stand-by credit facility. The completion of these reviews enables the release of SDR 129.4mn ($180mn), bringing total disbursements under the arrangements to SDR 258.8mn ($360mn). According to the IMF, recent indicators suggest that strong recovery is underway in Senegal, driven by industrial production, services and retail activity. The IMF added that the outlook points to sustained stronger activity, as the impact of the pandemic is abating but is subject to significant uncertainty, and risks are tilted to the downside. These include repeated COVID-19 outbreaks, a deteriorating regional security situation, delays in the start of oil and gas production, and a rapid rise of global interest rates.

Tanzania: Headline inflation in Tanzania edged higher to 4.2%  y/y in December from 4.1% y/y in the month prior. While the increase was marginal, this was the fastest pace of price growth in the economy since November 2017. According to the National Bureau of Statistics report,  food and non-alcoholic beverage costs rose to 4.9% from 4.4% in November. Despite the continued uptick in inflation, headline inflation remains below the Bank of Tanzania's 5.0% medium-term inflation target, which has been the case for four years. Therefore, this will provide some room for the BoT to remain accommodative and support economic recovery.

Tanzania: UK-based private company Kabanga Nickel yesterday reported that the BHP Group has invested $40mn in a Tanzanian nickel project. Kabanga, which expects to start producing in 2025, aims for a minimum annual output of 40,000 tonnes of nickel, 6,000 tonnes of copper, and 3,000 tonnes of cobalt. Demand for nickel, a key component in electric vehicle batteries, is projected to rise. Kabanga said BHP's investment will accelerate the mine's development, with a definitive feasibility study and construction plans for a refinery to be completed by the end of this year. Furthermore, BHP's investment in Kabanga will give it an 8.9% stake once conditions are met, and the world's biggest miner plans to invest a further $50mn, which would increase its stake to 17.8%, valuing the project at $658mn. The move by BHP marks a return to Africa after the world's biggest miner had not been active since it spun off South32 in 2015. The CEO has signalled a willingness to venture into "tougher jurisdictions."

Forex: Ugandan Shilling kicks off 2022 on a relatively strong footing

The Uganda Shilling (UGX) enjoyed a relatively strong 2021 and was ranked the fifth-best performing African currency against the USD. The strength of the UGX has persisted at the start of the year, with the currency outperforming its African peers yesterday to end the session 0.65% firmer against the USD at a more than one-month high of around 3540. This added to gains of 0.78% on a month-to-date basis. Partly driving the appreciation in the UGX yesterday was limited demand for hard currency, as corporates prepared to remit mid-month taxes on the back of healthy interbank and customer flows. 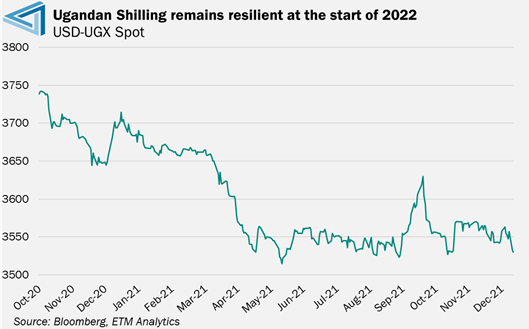 Pulling back the lens, it is worth noting that the broader strength of the UGX over the past year and into the start of 2022 has also stemmed from hard currency inflows from remittances and exports of commodities like coffee. Moreover, the prudent monetary policy stance of the Bank of Uganda has translated into a high real rate that’s added to the currency’s resilience. For context, Uganda’s real rate currently stands at 3.9%, which is one of the most attractive on offer and has increased the UGX’s carry appeal.

While the UGX has kicked off the year on a strong footing, risks for some pressure in the coming weeks exist, given the reopening of most sectors of the economy. Ugandan authorities are scrapping long-standing anti-coronavirus measures, including reopening schools, bars and allowing other entertainment activities. Moreover, demand for dollars is set to pick up from merchandise importers looking to ship in goods to meet an anticipated spike in demand.

The bearish bias in Ghanaian Eurobonds seen in the second half of last year remains entrenched at the start of the new year as fiscal concerns intensify. Yields across Ghana’s Eurobond curve have surged in the first few trading session of 2022 and are now trading at levels associated with a country in fiscal distress. 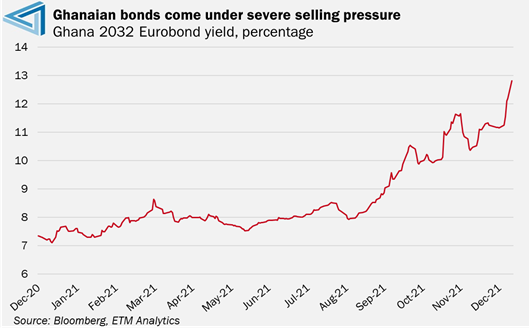 Moreover, it is worth noting that Ghana’s fiscal premium, the spread between Ghana’s 2032 Eurobond yield and the comparable US Treasury yield, has passed the 1000bps mark. Note that a fiscal premium of more than 1000bps is widely level associated with a country in distress. The marked rise in Ghana’s fiscal premium is a clear indication that investors are demanding a significant premium for holding Ghanaian debt following the sharp deterioration in the country’s fiscal position.

In their final credit rating updates for 2021 S&P and Moody’s flagged concerns over Ghana’s debt affordability and levels. That said, the government has shown signs that it is committed to debt sustainability and fiscal consolidation following the surge in debt in the wake of the Covid-19 pandemic. Until there is concrete evidence that the government is reining in the country’s ballooning debt pile, investors should maintain a cautious approach when investing in Ghanaian assets. That said, if the government moves ahead with meaningful debt consolidation policies, we see room for a sizeable rally in Ghanaian bonds.

GDP data published by the National Bureau of Statistics showed that economic activity in Kenya grew by 9.9% in Q3 2021. This compares to a 2.1% contraction in the same period in 2020 when the Covid-19 pandemic still had a firm grasp on Kenya’s economy. Recall that Kenya’s economy was hit hard in 2020 as the tourism sector plunged and as measures implemented to contain the spread of the coronavirus stifled activity.

Details from the report showed that some of the best performing sectors were education (64.7%), accommodation and food serving (24.8%, transport and storage (13.0%), manufacturing (9.5%) and financial and insurance activities (6.7%). However, not all sectors expanded in Q3. Activity in the agriculture, forestry and fishing sector contracted by 1.8% in Q3 2021 compared to growth of 4.2% in the same period in 2020.

The poor performance of the agriculture, forestry and fishing sectors resulted in a decline in fruit exports, cane deliveries, tea production and coffee exports. Note that drought conditions were partly to blame for the poor performance of the agriculture sector in Q3. The statistics agency said that total electricity generated increased by 6% in Q3 to 3,094.7mn kilowatt-hours. The increased electricity production came from all sources except hydro, which was down 23.3% on the back of insufficient rain. Electricity generated by thermal and wind was up 53.8% and 43.6%, respectively. Going forward, it is widely expected that Kenya’s economy will expand at a solid pace in 2022 as the economy is fully reopened and the tourism sector rebounds.