In addition to the release of the Fed's Beige Book, a host of Fed speakers will take to the podium today and offer further guidance on the outlook for Fed policy. A poll conducted by Reuters shows that the Fed may well prove more sensitive to the growth environment than first thought and only embark on lifting rates in 2023. In between now and then, the taper will take place, but at a gradual pace. Investors are hoping that today's Fed speakers will offer some clarity, although it is unclear whether there is anything new to discuss and whether it will change market expectations to any significant degree. Hard data is likely to be more impactful in driving equity markets and the USD in the coming days.

Alongside stock markets that have rallied on expectations the Fed may turn more sensitive to growth, the USD has come under pressure. Risk appetite has improved, and risk assets have responded to the firmer USD by rallying themselves. Bitcoin is trading just below record levels while emerging market currencies are capitalising on the trend too. Nothing in the way of data today will see the focus turn to the Fed speakers that are scheduled to offer further perspective on their expectations and the context against which they will make their decisions. Given how much information already exists in the market, it is unlikely that they will offer investors anything new.

Ethiopia: As federal forces continue their attempt to take back ground lost to rebel fighters, Ethiopia conducted airstrikes on Mekelle, the capital of the dissident Tigray region. According to a spokeswoman for Prime Minister Abiy Ahmed, the strikes targeted federal communication and security equipment that “have been misappropriated” by the Tigray People’s Liberation Front. The aerial bombardment, which follows a week of escalated fighting, is the latest development in a conflict that’s dragged on for almost a year, leaving many people in need of aid and soured sentiment towards Ethiopia as an investment destination.

Ghana: In a bid to attract more investors and make the companies more profitable, the Ghanaian government reportedly wants to list 15 state-owned companies on the Ghana Stock Exchange. According to the deputy managing director of the GSE, the GSE is working with the Ministry of Public Enterprises and State Interest and Governance Authority to ensure the companies to be targeted are ready for investments. Over $330mn is expected to be raised by selling stakes in the companies that are yet to be disclosed.

Morocco: Morocco’s Finance Bill for next year forecasts the economy to grow at a rate of 3.2% and the budget deficit to be 5.9% of GDP. Moreover, the Finance Bill is expected to result in the creation of 250k direct jobs in two years. According to government spokesperson Mustapha Baitas, “the budget bill was prepared on the assumption of an estimated crop year of 80mn quitals and an average price of butane gas of $450 per tonne.”

Mozambique: Credit Suisse is reportedly set to pay at least $400mn to settle with authorities probing its role in the fundraising scandal that looted money from Mozambique and tipped the country into an economic freefall. A subsidiary of the bank was expected to plead guilty yesterday as part of a deferred prosecution. The agreement is the latest action in a multi-year, international legal saga that came out of $2bn of debt deals from 2013 to 2014 to state-owned companies that were supposed to fund a new coastal patrol force and tuna fishing fleet in Mozambique.

Rwanda: Finance Minister Uzziel Ndagijimana said that Rwanda had received $100mn for the recovery fund from the Asian Infrastructure Investment Bank (AIIB). The concessional loan from the AIIB raises the recovery fund’s total to $350mn. Rwanda’s recovery fund was introduced last year to support businesses most affected by the coronavirus pandemic and has also received around $150mn from the World Bank.

Uganda: On Tuesday, the Finance Ministry reported that Uganda failed to export any gold in July and August following the introduction of a 5% levy on refined gold and a 10% tax on unprocessed metal effective July 1. Note, gold was the country’s biggest export earner with $165.9mn in June. According to the ministry, the government is reviewing the new levies after dealers raised concerns.

South Africa: Alongside some ZAR strength since the start of the month, the SARB may have been bought some time should the Fed ultimately play according to cooling expectations of policy tightening. However, the SARB, in its latest monetary policy review, expressed concerns about these elevated inflation pressures and are worried about destabilising CPI expectations if they do not hike rates soon. On the other hand, the weak demand environment and low credit growth, evident from the recently released retail sales data, raise some question marks over the SARB’s ability to tighten monetary policy. Overall, this implies the local currency may have a more volatile end to the year and should remain highly sensitive to changes in the outlook for global monetary policy tightening, which is already evident.

Forex: Kenyan Shilling plunges to a 10-month low as demand for dollars continues to outstrip supply

The bearish bias on the Kenyan Shilling persisted yesterday, with the currency depreciating to its weakest level in 10 months of around 111.01. The KES weakened as demand for dollars continued to outweigh the available supply of hard currency. Low hard currency supply has been attributed to depressed earnings from tourism and other sectors impacted by the coronavirus pandemic. Increased demand as the economy re-opens has only worsened the situation.

Against the backdrop mentioned above, KES bears have been in control, with the currency recording monthly losses every month since June. On a year-to-date basis, the KES has lost -1.56% against the USD and in terms of performance, is ranked 12th out of the 20 African currencies tracked by Bloomberg. Other factors that have attributed to the significant weakening in the KES include the recent rally in global oil prices, a recovery in imports, and a persisting current account deficit.

With increased dollar demand from importers expected to persist this week, pressure on the KES is unlikely to abate in the coming sessions. However, downside pressure may be curbed by adequate forex reserve levels and improving diaspora remittances. Recall in August, diaspora remittances rose by 14.2% y/y to $312.9mn while forex reserves currently stand at $9.261mn, equating to 5.66 months of import cover. 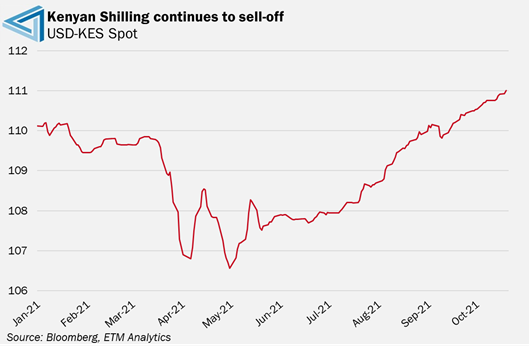 Ahead of next month’s budget, fiscal concerns in Ghana have intensified, with investors fretting over the country’s steep debt trajectory. Note that Ghana’s fiscal position has deteriorated markedly over the past year and a half on the back of the COVID-19 pandemic, which triggered a significant increase in government expenditure while revenues cratered amid the economic fallout spurred on by the pandemic.

Fiscal hawks are becoming increasingly concerned about the country’s sky-high debt servicing costs. Commenting on the matter, Bank of Ghana Governor Ernest Addison said that this has raised some red flags over the sustainability of the country’s debt. This escalation in fiscal fears comes amidst deteriorating external dynamics for bonds as inflation pressures continue to mount, bolstering bets for major central banks such as the Federal Reserve to begin tightening monetary policy as soon as next month.

The combination of worsening external conditions and growing concerns over Ghana’s fiscal outlook has seen Ghana’s credit risk premium surge to its highest level since May 2020. Specifically, Ghana’s 5-year USD credit default swap, which is essentially the cost of insuring against sovereign default, rose to 859bps on Tuesday, marking a 461bps rise since the start of the year.

Ghana’s 2032 Eurobond yield has also blown out in recent weeks as investors become increasingly concerned about Ghana’s ballooning debt pile and lack of commitment by the Finance Ministry to rein in the country’s debt pile. Note that the slower-than-expected economic recovery will make it harder for Ghana to fund its budget deficit, which is only expected to return to within the fiscal rule of 5% of GDP by 2024. It is also worth pointing out that Ghana’s revenue missed the Finance Ministry’s target by 12% in the first seven months of the year, coming in at GHS 34.3bn.

Going forward, unless Finance Minister Ken Oforri-Atta is able to convince investors that the government will adopt some significant fiscal reforms and prudent fiscal policy measures, the outlook for Ghanaian sovereign bonds remains decisively bearish, notwithstanding the persistent rally in commodities, which to some degree is helping to offset some of the fiscal pressures. 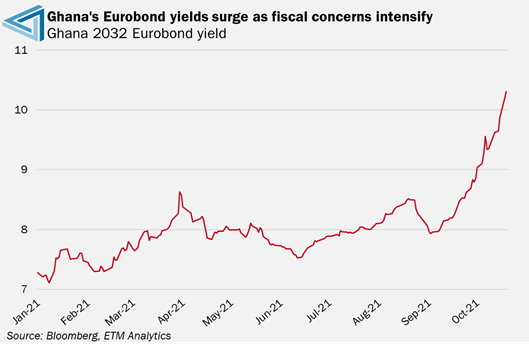 Investors keep an ear to the ground when it comes to the outcomes of ratings agency reviews as these have a material impact on whether or not a country or asset is favourable from an investment perspective. Ratings that are under pressure result in higher returns being demanded by investors and in the case of government bonds sees yields rise across the curve as the market prices for the negative fiscal conditions.

Botswana has been engaging with all stakeholders to improve its bond market, which by international standards is still in its infancy. Liquidity in the secondary market and the ability for the local institutional market to absorb additional issuance by the government has been questioned. Bond auctions this year have not attracted the investors to the degree that the government had hoped, given that investors have demanded higher yields than the government was prepared to offer.

Looking ahead, we still hold the view that Botswana holds tremendous promise in its quest to develop a fully functioning fixed income market with strong market liquidity, given the fact that the country has strong fiscal metrics and good prospects for diversifying its economy away from diamonds. The Kalahari Copper Belt and latest energy investments are cases in point.