Despite the US data last week that pointed to a resilient labour market which might encourage the Fed to remain hawkish, the USD has remained on the defensive and lost more ground this morning. The weaker USD trend is now becoming well-established and speaks to the need to unwind a tremendously overvalued position. It would appear that beyond market expectations that the Fed will pivot regardless of the data, the Chinese have also indicated that they will reopen their economy and soften their covid stance after weeks of protests. Investors are actively pricing less risk aversion, which has also counted against the USD. The more the world normalises, the less the need to default to a safe haven like the USD. As the Fed reaches for the pause button and even contemplates rate cuts through 2023, the USD will extend its slide and FX market dynamics are likely to normalise to some degree.

Ghana: The big news over the weekend was that Ghana will launch its Domestic Debt Exchange today, according to a statement from Finance Minister Ken Ofori-Atta. The Finance Minister added that details on debt restructuring parameters would be presented in due course. According to the statement, domestic bondholders will be asked to exchange their instruments for new ones. Specifically, existing domestic bonds will be exchanged for a set of four new bonds maturing in 2027, 2029, 2032 and 2037. The coupon on the new bonds will be set at 0% in 2023, 5% in 2024, and 10% in 2025 until maturity. Given that markets have already priced for a debt restructuring, there is a solid chance that we could see Ghanaian assets respond positively.

Nigeria: The shortage of petroleum products which hit Nigeria in July is getting worse. Nigerians cling to the hope that the $18 billion Dangote Refinery, anticipated to start operating by the end of December, will bring much-needed relief. Nigeria, the world’s 6th oil producer that is dependent on the importation of petroleum products, has thrown motorists and households into confusion as petrol, diesel, and kerosene disappeared from filling stations for months. While awaiting the commencement of fuel production by the refineries, the Nigerian government has continued to import products. The few open petrol stations are selling petrol, kerosene and diesel at 250% above the regulated price of N175 per litre.

Kenya: President William Ruto has suspended four election commissioners who refused to endorse his win in an August election, the presidency said on Friday, and formed a panel to investigate if they should be removed. This has created fresh tensions between the government and the opposition in East Africa's biggest economy. Raila Odinga, the veteran opposition leader, accused Ruto of trying to seize control of the management of the next election at the cost of acting on the promises he made to Kenyans. "They want to appoint their own members of the commission to carry out their rigging in 2027," Odinga said, vowing to hold public rallies to consult with Kenyans on the next steps. The first meeting will be held in Nairobi on December 7, followed by a second one on December 12.

Democratic Republic of Congo: Finance Minister Nicolas Kazadi expressed concerns about the impact of the war on the government books. Speaking during an interview on the sideline of the Africa Financial Industry Summit in Lome Togo over the weekend, FinMin Kazadi said that the high cost of fighting a rebellion in eastern DRC is weighing on the national budget. However, the fiscal impact of the cost of war is limited so far due to higher-than-expected mining revenue. Kazadi noted that the DRC’s budget for exceptional security expenses had increased more than ten-fold because of the conflict with the M23 rebel group. However, FinMin Kazadi does not expect unforeseen costs to affect next year’s election budget.

Egypt: The Egyptian government is optimistic that they will be able to receive the first instalment of the International Monetary Fund (IMF) loan of about $750mn this month. The amount which is hoped to be received in December represents 25% of the total value of the financial support program that the IMF recently approved at an amount of $3bn in October. The inflow of IMF funds will be welcome as they will help boost dollar liquidity in the country, which bode favourably for the Egyptian pound.

Morroco: It was reported that heavy rainfall is expected to hit several provinces across Morocco on Monday and Tuesday. With the country already witnessing significant downpours last week, the much-needed rainfall comes at a time when the country has been suffering from the severest drought in the last three decades. Farmers will welcome the rains as they will help increase their agricultural output.

Forex: Is the worst over for the Ghanaian cedi?

2022 has been a bruising year, to say the least, for the Ghanaian cedi as a fiscal crisis unfolded on the back of the aggressive global monetary policy tightening. The Ghanaian cedi has been one of the worst-performing currencies in the world this year, with the USD/GHS spiking from levels just north of 6.0000 at the start of the year to a high of 15.0625 in November. 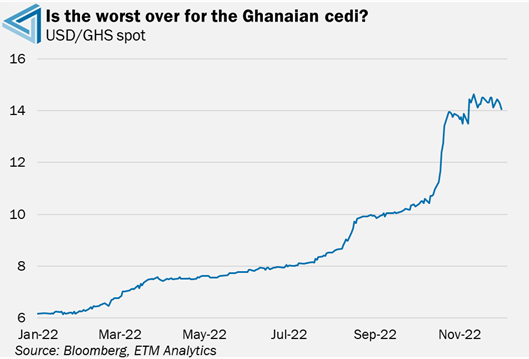 While the broader bearish bias in the cedi remains intact, it is worth noting that the currency has regained some lost ground recently, with the USD-GHS falling to 14.0500 at the end of last week. Given that the market has effectively priced in a debt default/debt restructuring and the deep discounts in Ghanaian assets, the big question now is, will we see a meaningful rebound in Ghanaian assets if there are some positive developments on the fiscal front?

Although sentiment towards Ghana remains tetchy, in addition to the recent recovery in the cedi, we have also seen a meaningful rebound in Ghanaian Eurobond prices. The rebound in the cedi and Ghanaian Eurobonds has been driven by investors turning slightly more optimistic about the fiscal outlook for the country amid signs of fiscal reform and hope that the country will be able to secure a much-needed program with the International Monetary Fund. As was the case for the Zambian kwacha, debt restructuring and securing a deal with the IMF could prompt a marked rebound in the cedi.

The Central Bank of Kenya said in a statement on Friday that its switch auction last week was undersubscribed, a sign that investors are still cautious about turning bullish on Kenyan bonds. Specifically, bids at the auction where the Central Bank of Kenya offered to switch 3-month Treasury bills and 2-year bonds for 6-year infrastructure bonds came in at KES 52.9bn compared to offers of KES 87.8bn, resulting in a subscription of just 60%. 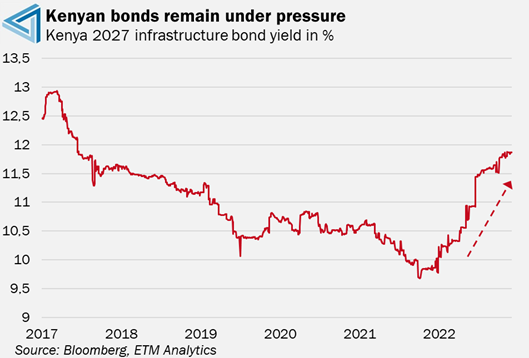 While there are signs that the pace of tightening in Kenya and core markets could slow in the months ahead amid signs that inflation is peaking, debt servicing costs are expected to rise further in the near term, which will put added pressure on the government. That said, while fiscal pressures are expected to remain acute, the government has shown some sign of fiscal constraint, and this, together with a likely pivot in monetary policy, could provide some reprieve for Kenyan bonds in 2023.

Data published this morning showed that business conditions in Egypt deteriorated sharply in November as inflationary pressures continued to weigh on business activity and demand. Specifically, Egypt’s headline PMI reading fell from 47.7 in October to 45.4 in November, the second-lowest reading since June 2022. S&P Global said in the report that output fell at the sharpest rate since the initial COVID-19 lockdown in May 2020. 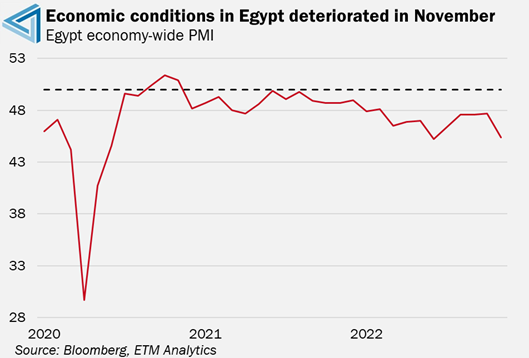 S&P said central to the downturn was a rapid decrease in business activity, as survey panellists reported that accelerated cost rises and falling new orders forced them to cut output. The rate at which activity declined was the sharpest for two-and-a-half years and the most severe since January 2017, excluding the initial phase of the COVID-19 pandemic. Export sales also decreased amid slowing global economic conditions.

One of the main factors behind the sharp decline in business conditions was the sharp depreciation of the Egyptian pound against the USD as the central bank adopted a more flexible regime to enable the approval of a new IMF deal. The marked sell-off in the pound saw purchase price inflation accelerate to a 52-month high. While most businesses pass on the higher input costs to their customers, several panellists signalled some hesitancy to raise charges as sales continue to fall.