Amid a growing sense of crisis, the Bank of Ghana surprised with a bold rate hike today (21 March), a 250bps increase to 17%, compared with the Bloomberg consensus of a 100bps increase from 14.5% to 15.5%. It comes after a 100bps increase in November, although the central bank left rates unchanged at its last meeting in January, and follows the continued rise in domestic inflation and sharp fall in the currency this year.

Meanwhile, Ghana's dollar bonds jumped c4-5pts across the curve on Friday (18 March) morning, London time, seemingly in reaction to positive market chatter about IMF involvement, although this was later dismissed by the government, leading to a subsequent reversal.

The bonds have fallen by another 1pt or so on 21 March (at the time of writing), so they are up only c1-1.5pts in net terms since Thursday. The curve remains inverted, with yields elevated, ranging from 18% (front end) to 14% (long end). 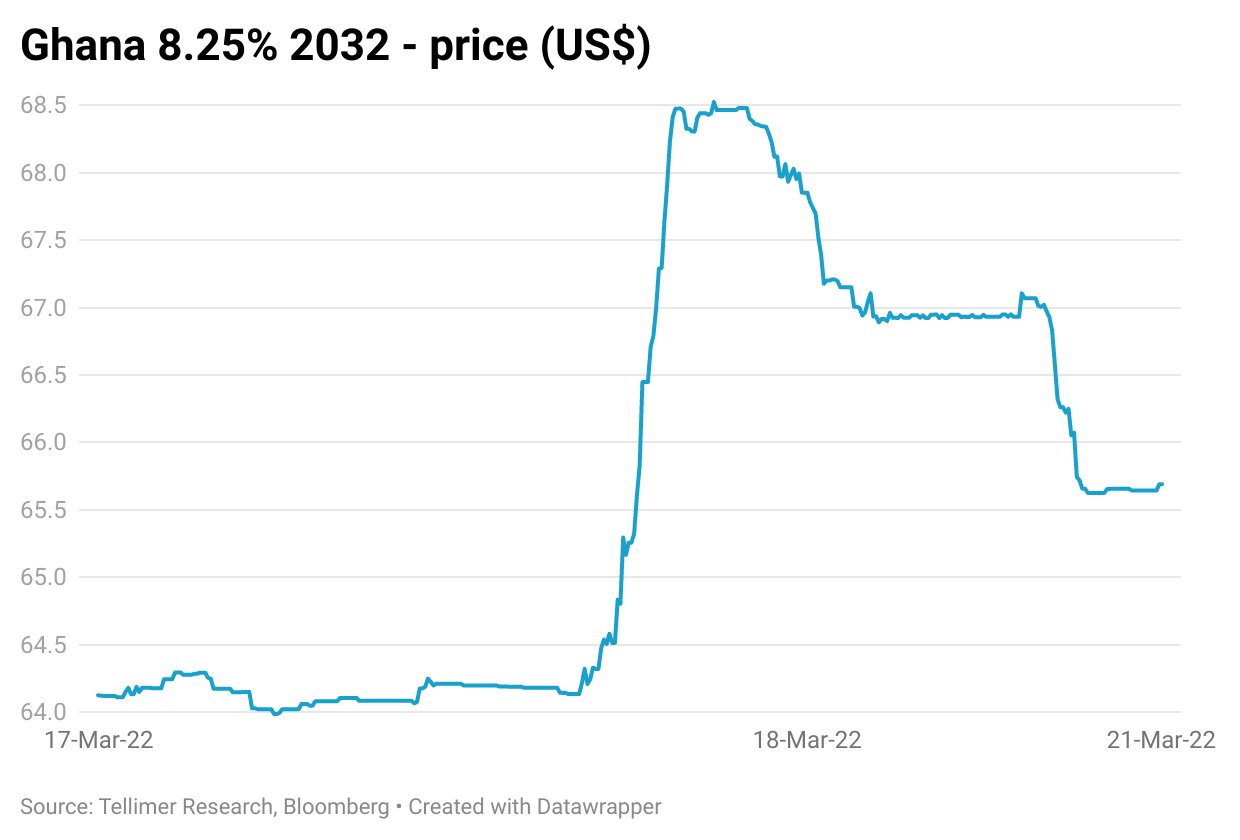 The market's excitement came ahead of the government's quarterly cabinet retreat that commenced at the end of last week and continued over the weekend. It finished yesterday (Sunday). According to reports, the retreat discussed economic performance, government policies and the impact of the external environment on Ghana.

The cabinet meeting took place amid a growing sense locally of an impending economic crisis, given the decline in the cedi (-15.5% YTD versus the US dollar, according to Bloomberg), making it one of the world's worst-performing currencies among EM and mainstream frontiers this year (the third-worst on Bloomberg's currency ranker, behind Russia and Sri Lanka), and the rise in inflation (15.7% yoy in February, up from 13.9% in January).

The fall in the currency comes despite the rise in commodity prices, driven by Russia's war with Ukraine, from which Ghana should stand to gain. 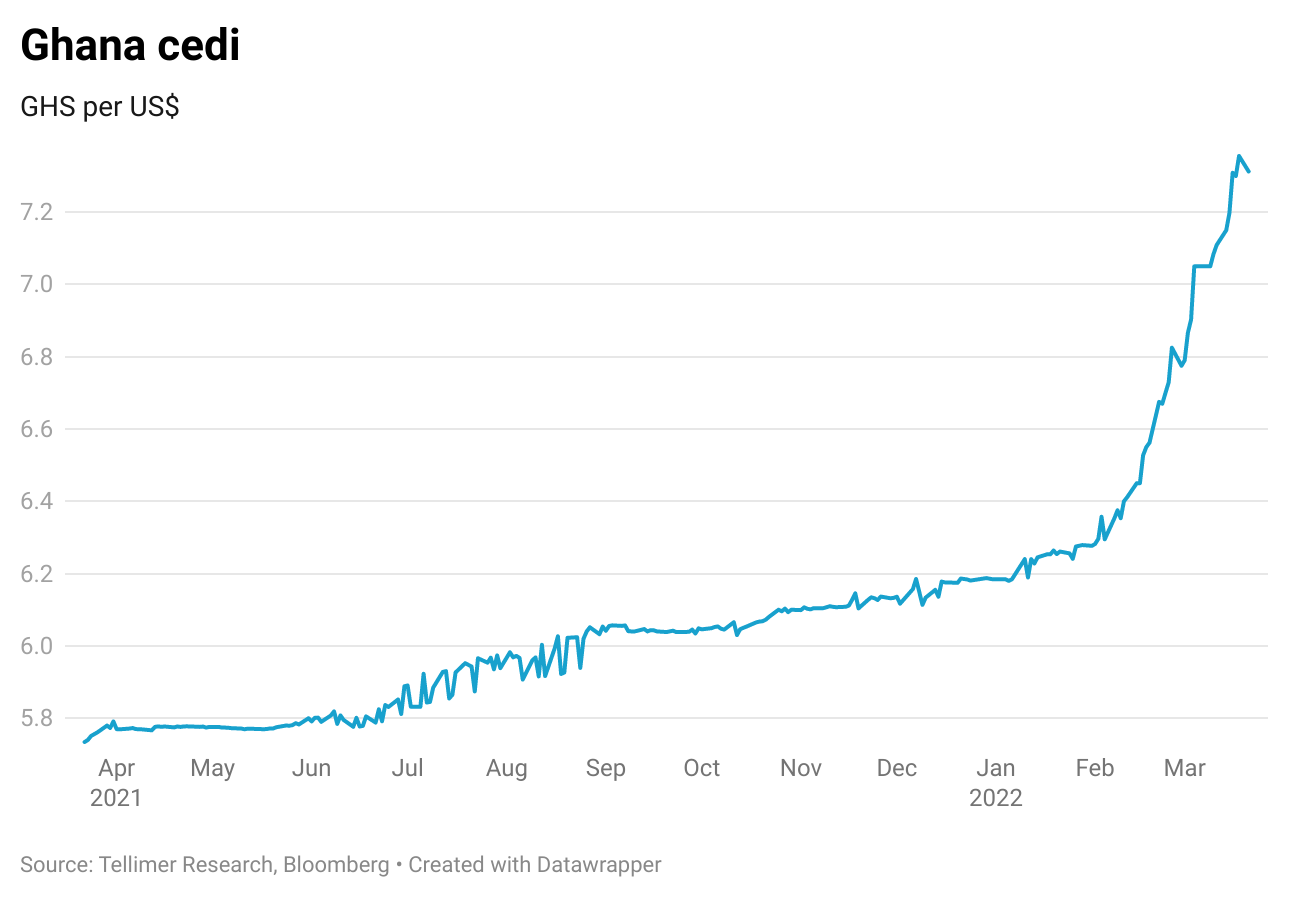 However, in a Facebook post on Friday afternoon, the presidency stated that an IMF programme is not being considered: "An IMF Bailout is not on the country's agenda as Cabinet considers home-grown solutions while it discusses fuel price hikes, reopening of borders and other main items".

According to local media reports on 21 March, the president approved a number of measures at the retreat to limit the cedi's depreciation, ensure spending discipline, provide relief from higher fuel prices and inflation, and to protect the government's priority spending programmes. The finance minister is expected to provide more details to parliament later this week.

Although we could be surprised, it would now seem unlikely for a call to the IMF to be part of the solution after the government dismissed this as recently as 18 March; and with the tacit suggestion that IMF support would be an embarrassing failure, despite some local calls for it. The market reaction also shows how sensitive investors are to any suggestion of IMF involvement, although the government is choosing to ignore this. However, that is not to say, if things do not turn around, that it won't be back on the agenda in coming weeks or months. But the government's position explains the market's disappointment.

Adding to the sense of crisis, the Bank of Ghana brought forward its scheduled rate decision by a week to today. Still, while the surprise rate hike may send a strong signal of the monetary authority's independence and willingness to act, the impression is that it is doing all the heavy lifting itself, with one hand tied behind its back, as fiscal policy takes a back seat. What really matters to restore investor confidence is greater fiscal credibility and prospects for this still look no clearer. Bondholders will hope more will be revealed on this this week. 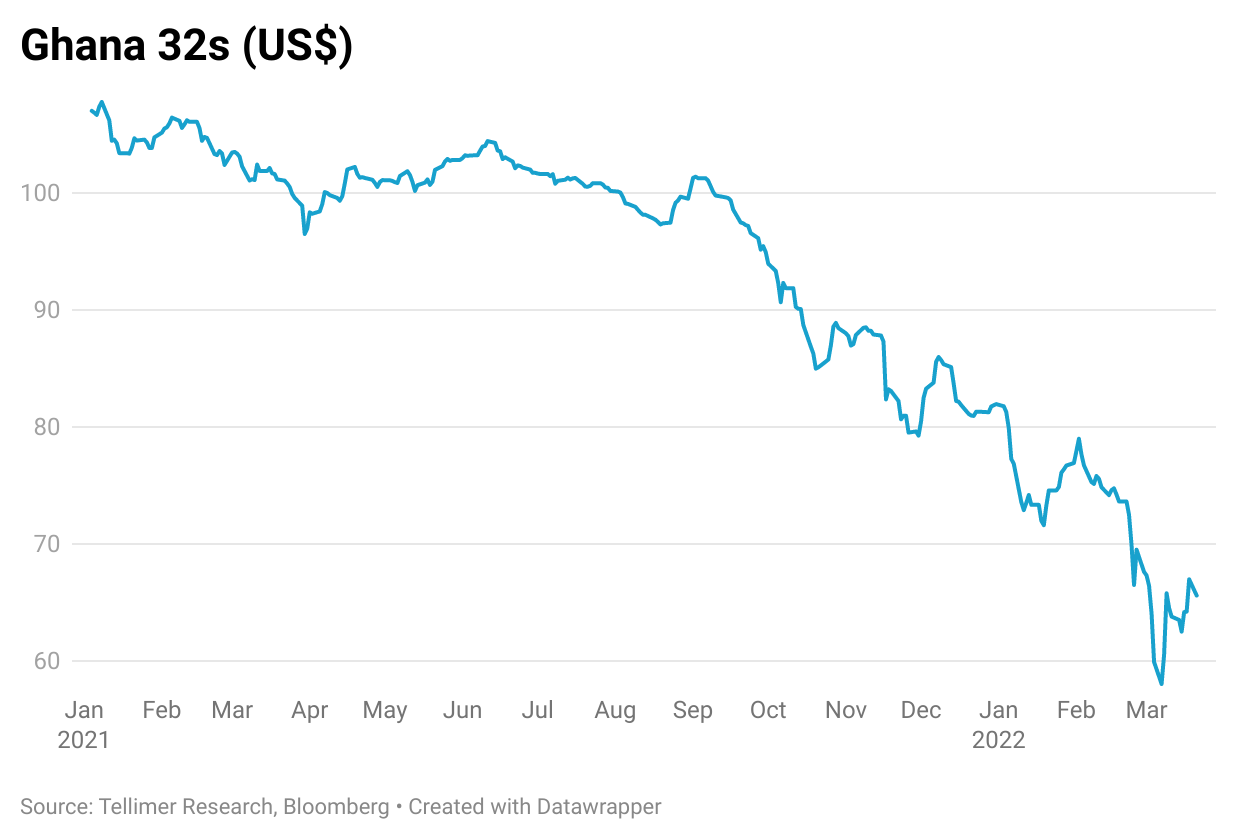