Strong US economic data has lent the USD support.  It has performed extremely well against the majors, and expectations are that it will remain supported for now. Only if the Fed shows signs of softening its stance will the USD come in for some correction. However, for now, the EUR and the JPY are being used as funding currencies, and that trend will extend through the months ahead to keep the USD reasonably well supported. Focus today will shift to the housing data for more insight into the strength of the economic recovery, but it is not traditionally much of a market-moving data release.

Mozambique: The Monetary Policy Committee (MPC) will deliver its latest verdict on its policy rates today. At its last meeting in September, the MPC decided to maintain its key MIMO rate at 13.25%. The decision was based on maintaining single-digit inflation prospects, despite the prevalence of high risks and uncertainties, especially those arising from the impacts of COVID-19, according to an official statement by the CPMO. Inflation rose for a third straight month in October, and risks are tilted to the upside amid rising food and oil prices in the international market as well as the recent increase in the fuel price domestically. That said, policymakers expect it to remain at a single digit in the short-to-medium term. Therefore, we expect the Bank of Mozambique to maintain its current monetary approach into the year-end.

Kenya: Kenya's trade deficit widened to KES 852bn in the eight months through to August, compared with KES 631bn a year earlier. The widening of the surplus was attributable to a more pronounced rise in inbound than outbound shipments. Specifically, imports surged 26% to KES 1.34trn while exports rose 16% to KES 490bn. From a currency perspective, a widening trade deficit is likely to place additional downside pressure on the Kenyan Shilling, which is trading at record low levels.

Nigeria: In a move that could potentially disrupt a critical sector in the economy, one of Nigeria's main oil and gas unions yesterday said that it had issued a 14-day warning of strike action over several labour disputes, including those with oil majors Chevron and ENI. The Nigeria Union of Petroleum and Natural Gas Workers said the Federal Ministry of Labour and Employment had 14 days to resolve the disputes starting from 15 November. It raised issues over workers allegedly terminated by Chevron in 2012, who NUPENG said were not adequately compensated, and over back pay owed by state oil company subsidiary NPDC and by the local subsidiary of Italian oil major Eni. Nigeria is Africa's largest oil producer, and crude sales make up around 90% of its foreign exchange and more than half it’s budget.

Uganda: In what was described as a coordinated attack by extremists opposed to the government, two explosions rocked Uganda’s capital, Kampala, on Tuesday, killing at least three civilians. According to the police, three suicide bombers also died in the blasts. A spokesman for the police blamed the blasts on the Allied Democratic Forces, an extremist group that is affiliated to the Islamic State group. The IS group claimed responsibility for the blasts, according to SITE, which tracks the online activities of extremist organizations. The Allied Democratic Forces has long been opposed to the long rule of Museveni, a US security ally who was the first African leader to deploy peacekeepers in Somalia to protect the federal government from the extremist group al-Shabab.

Zambia: China's Ambassador to Zambia was on the wires saying that Zambia's anticipated economic recovery means it is essential that the country's government initiates negotiations with Chinese creditors. The Ambassador further said that "we are going to work earnestly and cordially with the Zambian government." Zambia's full list of its 44 external creditors shows that the government owes Chinese lenders more than one-third of its total $13.4bn of foreign-currency debt stock. With Zambia having a long and diverse list of creditors, the country's debt restructuring talks are likely to be complex.

South Africa: Ahead of the MPC meeting tomorrow, the ZAR may also be a little bit vulnerable. A quick look at the FRA curve shows that there are numerous rate hikes already priced in. Investors have taken some of their guidance from the SARB's quarterly projection model and the trajectory it alludes to. The point to make is that the market is already positioned for these hikes. If there is a risk in the upcoming meetings, it is not that the SARB's MPC decides to hike more aggressively, but that they turn more cautious in their monetary tightening.

The sustained weakness in the Ethiopian Birr (ETB) this year has in part weakened due to a deeply negative real rate amongst other challenges such as heightened fiscal risks, geopolitical uncertainty, risks of US sanctions, a fragile economic recovery, and several rating downgrades. With this in mind, it is worth taking a look at the latest inflation data out of Ethiopia. Headline inflation in Ethiopia in October slowed to 34.2% y/y from 34.8% y/y. On a m/m basis, prices dropped by 0.1%.  While inflation headline inflation in Ethiopia slowed for the first time in six months, it remained elevated at levels last seen in December 2012. 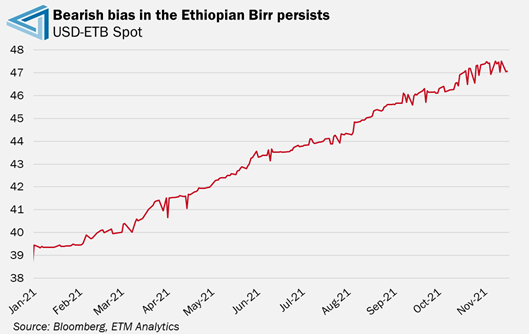 Food inflation, a major driver of the headline figure in recent months, slowed to 40.7% y/y from 42.0% y/y in the month prior but remained near a record high. Food price inflation in Ethiopia has been in part largely underpinned by conflict in the North, which has disrupted supply chains and created shortages. Adverse weather conditions and macroeconomic shocks have also added upside pressure. As part of measures to combat the surge in food inflation, the Ethiopian government launched a direct-to-consumer market scheme at the end of last month. Addis Ababa has many temporary direct sales markets called “Sunday Markets” held every Sunday to ease the burden on low-income local households, stabilize society, and reduce living expenses.

While the slowdown in inflation in October has seen Ethiopia’s real rate narrow, it remains deeply negative, compounding pressure on the currency. For context, Ethiopia’s real interest rate (Policy CPI) now sits at -27.2%, placing it amongst the lowest globally. Note that the ETB has lost nearly 18.00% against the USD since the start of the year, making it Africa’s worst-performing currency in 2021.

All eyes will be on Ghanaian Finance Minister Ken Ofori-Atta today as he delivers the country’s 2022 budget. Ghana has been a sore point for many investors this year amid growing concerns over the sustainability of the country’s debt and the economy's sluggish recovery. Investors will be looking for reassurance from the Finance Minister to roll out much needed structural reforms aimed at boosting economic growth while at the same time limiting any further fiscal degradation.

Specifically, investors will be looking for a credible plan from Minister Ofori-Atta to reduce the country’s fiscal deficit, wasteful expenditure and massive debt pile. Investors have become increasingly concerned about the government’s ability to service its debts as the country moves closer and closer towards a position of fiscal distress. According to the latest projections from global ratings agency Fitch, the interest portion of Ghana’s debt servicing costs is expected to rise to 47% of revenue in 2022, well above the 11% average of similarly rated sovereigns.

Ghana’s massive interest burden has weighed on investor sentiment towards the country and has resulted in investors demanding a significantly higher premium for holding the country’s debt. Note that the premium for holding hard currency Ghanaian bonds has widened considerably more than has been the case for its African peers. According to  JP Morgan’s Ghana Sovereign Spread Index, Ghana’s Eurobond spread has widened by more than 200bps this year, compared to the African average of less than 30bps. This is reflective of just how much fiscal risk is being baked into Ghanaian assets. 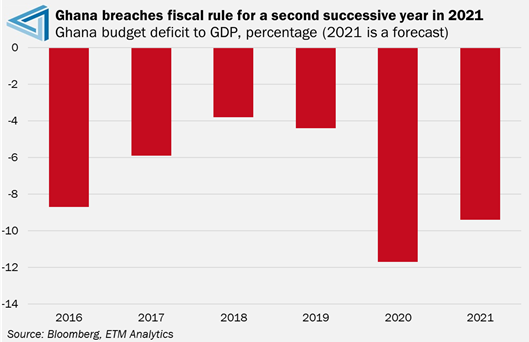 While there has been considerable fiscal slippage over the past two years, with the COVID-19 pandemic resulting in a significantly steeper debt trajectory, it is worth highlighting that Ghana has shown is recent years that it is capable of fiscal prudence with the country slashing its budget deficit from as high as 8.7% in 2016 to just 3.8% in 2018. This came on the back of legislation, which capped the budget shortfall at 5%. Going forward, in the absence of major expense compression and measures aimed at boosting revenues, fiscal risks in Ghana remain significant, with the country currently on an unstainable debt trajectory. Note that weak revenue collections have been one of the key factors underpinning the recent spike in Ghana’s debt pile. As such, today’s budget will prove to be pivotal for the direction of Ghanaian assets in the months to come.

It is no secret that fiscal risks in Kenya have risen markedly in recent years, with the COVID-19 pandemic amplifying the pace of fiscal degradation over the past year and a half. Kenya’s debt servicing costs have surged in the current fiscal year. Some forecasts suggest that Kenya’s debt servicing costs are set to rise by 22% this fiscal year, with the country expected to spend a record KES 1.17trn or around $10.4bn on debt repayments in the current fiscal year ending in June 2022. 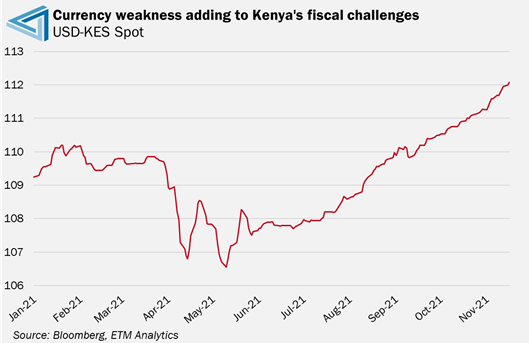 National Treasury said that Kenya’s debt repayments have risen by around a fifth to KES 781bn, in part due to the Kenyan Shilling’s depreciation. As mentioned in yesterday’s note, the Kenyan Shilling has lost around 2.6% against the USD in 2021 and is trading at its weakest level on record. This comes on the back of a marked depreciation in the Shilling last year, with the currency plunging 7.35% against the USD in 2020. While the sustained weakness in the Kenyan Shilling has compounded Kenya’s fiscal problems, it must be noted that the flexible exchange rate will continue to help the economy absorb exogenous shocks.