FX: Strong ISM non-manufacturing data for October released yesterday reflected an economy that still enjoyed great resilience. Not only did activity pick up, but so too did the hiring component. The result was a more convicted bet on US interest rates. Expectations for rate cuts in 2023 moderated significantly, and now there is only a risk of a rate cut priced in rather than a full rate cut or series of rate cuts. Instead, rate-cut bets were pushed out to 2024. The USD responded constructively and appreciated on a trade-weighted basis. The USD index is up and appears to be consolidating the gains now that the pivot no longer looks guaranteed and that the outlook for rates is less dovish. More data is needed to be convinced of a taper, but we will need to wait until Friday before more market-moving US data is released in the form of consumer confidence and wholesale sales. The EUR-USD backed away from its recent highs and is trading below 1.0500, while the GBP is trading back below 1.2200.

Fixed income: US Treasuries tumbled yesterday following some stronger-than-expected US economic data, which saw the market increase what it sees as the terminal rate for this current Fed hiking cycle. Front-end yields were up by more than 15bp at one point on the day, while the benchmark 10yr yield climbed 10bp. The rally for yields drove a broad rotation away from risk assets, overshadowing the news from earlier in the morning regarding China’s reopening. With the market now pricing in peak rates at 5.00%, there may be very little upside left. However, we can expect to see some volatility in the market amid year-end and the current Fedspeaker blackout ahead of next week’s FOMC meeting. A 50bp increase is still the base case for the December meeting.

Ghana: Yesterday, Ghana kicked off its debt exchange programme, in which it asked investors to exchange around GHS 137bn ($9bn) in current debt for four new bonds maturing between 2027 and 2037 to ease a crunch in payments as the government negotiates an International Monetary Fund (IMF) bailout during its worse economic crisis in decades. Ghana is in talks for up to $3bn in credit from the IMF to help shore up its public finances. As part of IMF negotiations, Ghana's government seeks to make its debt more sustainable after facing warnings about default risks. The Governor of the Bank of Ghana, Dr Ernest Addison, has expressed optimism that the proposed Debt Exchange Programme will bring some confidence in the economy and enhance the bank's efforts in controlling inflation.

Nigeria: Nigeria’s Debt Management Office (DMO) revealed that the country would issue a green bond to raise funding to finance the budget shortfall. The director-general of the DMO, Patience Oniha, noted that the issuing of a green bond serves as an alternative funding source to fill the country’s ever-increasing budget deficit, which currently sits at NGN 10.78tn ($24.3bn). Details about the size and timing of the bonds are yet to be disclosed. It is worth noting that Nigeria last issued a green bond more than four years ago. Whether or not the new issuance will attract strong bidding interest remain to be seen, given that investors have become increasingly cautious about where to invest their capital.

Nigeria: Concerns are rising amongst stakeholders in the nation’s oil and gas sector over new threats to ease of doing business, in addition to a recent Senate directive for Nigeria Liquefied Natural Gas to pay NGN 18.4bn to host communities for the right of way it acquired more than three decades ago. Both of these have the potential to deter foreign direct investment into Nigeria, which it can ill afford. The stakeholders stated that the Senate lacks the power to order NLNG to pay when speaking at the Platforms Africa Forum 2022. A balance must be found between protecting the communities and companies to succeed.

Africa: In an effort to support poor rural communities to cope with the impact of the global food, fertilizer and energy crisis, Germany has granted €30mn to the UN’s International Fund for Agriculture Development (IFAD). The funding will be channelled as immediate support through existing IFAD programmes operating in countries hardest hit by the setbacks. Notably, this funding from Germany helps support nine countries, namely; Mozambique, Yemen, Haiti, Madagascar, and Malawi, among others most affected.

Zimbabwe: The Reserve Bank of Zimbabwe (RBZ) decided to keep the bank policy rate unchanged at 200%. This marks the third consecutive meeting the central bank has stood pat on the policy rate, citing the continuing deceleration in monthly inflation as the reason for its decision. The RBZ agreed to further liberalise the foreign exchange market in the first quarter of next year to enhance efficiency in the operation of the foreign-exchange auction system.

Kenya: Kenya’s vice chairwoman of the Independent Electoral and Boundaries Commission (IEBC), Juliana Cherera, who disputed the results of the August presidential vote, resigned yesterday. The latest development comes days after Cherera, along with three other officials, were suspended by President William Ruto for disputing the election outcome. Meanwhile, President Ruto fired back against opposition leader Raila Odinga’s plan to hold public consultations on IEBC reforms, saying the fate of the four commissioners will be determined by a tribunal chaired by a high court judge. He went further to call upon all Kenyans to shun the mass action planned by Odinga on the 7th and 12th of December.

Oil: Oil had another volatile Monday yesterday, with Brent crude rising to around $88.50 per barrel during the European session, bolstered by China’s reopening and broad risk-on trade. This reversed sharply in the US session, however, as surging UST yields and a bounce for the USD quickly drove a rotation out of risk assets. Brent thus closed the day yesterday just below $82.70 per barrel, keeping the broader downward trend relatively intact still. Traders are still clearly concerned over the demand outlook for 2023 as prices have not necessarily responded as expected to the news out of China or the upcoming output cuts by OPEC+.

Movements in the currency market suggest that investors viewed the announcement of the debt exchange over the weekend in a positive light. The Ghanaian cedi was the standout performer in the African currency market yesterday, gaining in excess of 4.00% against the USD to end the session at 13.5000, in what was otherwise a mixed session for African FX. The rally in the GHS was not just contained to the spot market as USD/GHS non-deliverable outrights also plunged on the back of the debt reform news. 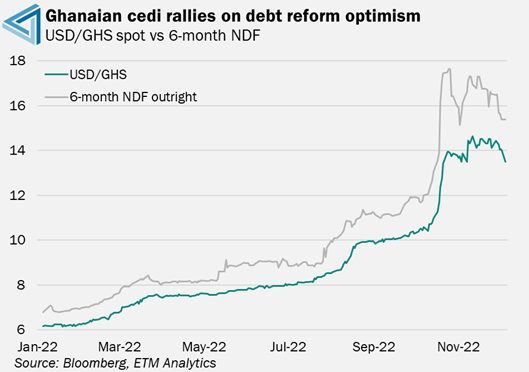 While there will be concerns over the debt restructuring, particularly relating to the debt exchange on foreign currency debt, on which details are yet to be published, investors are hopeful that the debt exchange will prevent a direct default on debt. Moreover, the debt exchange underpinned hope that the country is one step closer to securing a deal with the International Monetary Fund. Note that Ghana has GHS 43.5bn of domestic debt maturing between now and the end of June.

Therefore, the debt exchange, where the government will replace existing local currency debt with four new bonds maturing in 2027, 2029, 2032 and 2037, will help alleviate pressure on the government to repay maturing debts in the near term. While fiscal pressures in Ghana remain acute, given the deep valuation on offer against the backdrop of signs that the country could return to a sustainable fiscal position over the medium term, investors are beginning to rotate back into Ghanaian assets.

2022 has been a turbulent year for financial markets, with risks riddled throughout the year. Traders have had to contend with surging inflation, aggressive interest rate hikes, Russia’s war in Ukraine and the impact of Covid Zero in China. Bond markets, in particular, were hit hard this year as major central banks delivered a wave of unprecedented rate hikes to quell sky-high inflation.

While we have witnessed a meaningful rebound in bonds over the past six weeks on signs of a pivot in monetary policy, it must be noted that bonds entered into a bear market for the first time in more than two decades this year when looking at the Bloomberg Global Aggregate Bond Total Return Index. From its peaks at the start of 2021, the index fell by more than 25% to the lows seen in October 2022. 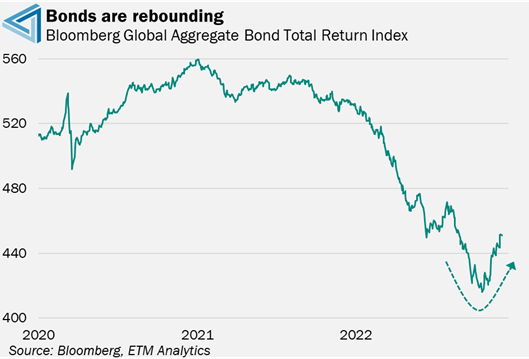 While bonds remain deep in the red this year despite the recent rebound, the shift in global monetary policy suggests that the recovery is likely to persist into 2023. Traders across the globe are beginning to price in significant rate-cut risk for 2023 and 2024 on the back of mounting growth concerns.

US rate traders are pricing in around 10bps worth of rate cut risk in 2023 and 137bps for 2024. In the emerging market space, markets are pricing in as much as 500bps worth of rate cuts for Hungary and Chile in 2023. Meanwhile in Africa, we have already seen Angola begin to unwind its post-Covid tightening. The pivot in global monetary policy in the months ahead should provide a tailwind for global bond markets.

Monday brought with it a wave of regional PMI data, providing a high-frequency update on the health of economic conditions in the region. Encouragingly, PMIs across Sub-Saharan Africa were mostly higher in November, with the most notable increase in South Africa’s headline reading. For context, South Africa’s economy-wide PMI reading rose from 49.5 in October to 50.6 in November, indicating a modest improvement in business conditions.

Kenya’s economy-wide PMI meanwhile rose to 50.9 in November from 50.2 in October. Details from the S&P Global report showed firms registered a marginal increase in output driven by a rise in new business from domestic and foreign customers and favourable weather conditions. On the pricing front, respondents signalled another steep increase in input costs due to currency weakness, higher taxation and transport costs. 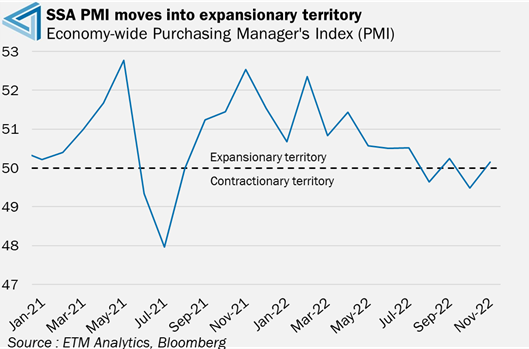 Mozambique’s PMI rose to 50.8, the upturn in Mozambique’s PMI followed a near-stalling of business conditions in October. Firms reined in their purchases, helping to soften purchase cost inflation to the slowest since March. Since the PMI has remained above 50 since February, this suggests that economic growth could be accelerated in the last quarter of the year.

Zambia’s PMI reading came in at 49.1 for November versus 49.0 for October indicating a private sector that is still in contractionary territory. Falls in activity were recorded across each of the five broad sectors covered by the survey. Tighter monetary policy across the world as well as money shortages locally are significant factors for the sector with the latter resulting in customers often being unable to commit to new projects/orders.