Ghanaian Cedi gains back some ground

Yesterday, global stock markets were weaker. This morning they are stronger across the board. Central to why this whipsaw behaviour is unfolding is the assessment of the Omicron variant and the gradual realisation that it may not pose the threat that the ultra-conservative and pessimistic forecasting models had predicted. Scientists questioned by the BBC last night highlighted how the outcome was beginning to look more like it could beat even the best-case scenario, although to be fair, they still needed data which was still a week away.

Nonetheless, it increasingly seems that countries implementing much harder lockdown restrictions may be overreacting with the sharp rise in infections not translating to an equal rise in hospitalisations. Fears that the healthcare systems would be overrun may not prove accurate because the Omicron variant does not generate severe illness. In many cases, people are not consulting doctors, let alone checking them-selves into hospitals. Although South Africa's demographics are quite different to those of Europe, there is still some optimism that can be taken from its experience. The main take-home point is not to panic and not to turn unnecessarily restrictive when the Omicron wave could blow over just as quickly as it began.

Therefore, it is fair that stock markets have not priced in a more bearish outcome. The data seen thus far does not warrant it. Cautious op-timism seems more justified, and that means that through the remaining two weeks of the year, global financial markets need not experi-ence a calamitous period of increased volatility. On the contrary, once the dust settles on the Omicron wave, investors may well revert to focussing on the lagged effects of the colossal amounts of stimulus applied in the previous 18 months and to position around a world with stronger GDP growth, higher commodity prices and inflation and rising interest rates. That is not all positive for sure, but it is more economic and less political and will allow for a more normal functioning of markets.

East Africa: Due to a drought that has killed hundreds and thousands of cattle and damaged crops, millions of people in Kenya, Ethiopia and Somalia are in dire need of humanitarian assistance. According to authorities, as many as 10mn people are affected, and delayed rains will further worsen the situation. According to an official at the Somali Region Disaster Prevention and Preparedness Bureau in Ethiopia, “cur-rently 3.4mn people are in need of emergency aid, and the figure could rise until April.” Moreover, humanitarian agencies, federal and local authorities are working together to raise as much as $57mn in emergency funds. Note, neighboring Kenya declared a drought in parts of the country a national disaster in September. Aside from a humanitarian crisis, it is worth noting that the drought has driven a significant rise in food price inflation in the countries affected.

Morocco: As widely anticipated, the Bank Al-Maghrib left its benchmark interest rate unchanged at an all-time low of 1.5% as uncertainty over the over the omicron variant complicates King Mohammed VI’s efforts to revive the economy. The decision marks the sixth straight time the policymakers have left the benchmark rate unchanged after it undertook an easing cycle between March and June 2020.

Mozambique: More than five years after the International Monetary Fund (IMF) halted its previous deal in the wake of Mozambique’s debt scandal, it has said that it is ready to start negotiations with the country about a financing program next month. Agreeing on a so-called ex-tended credit facility which could come with $317mn in concessional financing would be a landmark for the IMF and Mozambique. According to the IMF, “discussions on supporting the government’s program with an extended credit facility are scheduled to begin soon. Staff stand ready to commence negotiations in late January 2022.” Note, the fund has previously said negotiations would depend on the government’s appetite for a program, and President Filipe Nyusi’s government has so far avoided asking the IMF for a new bailout. The government has been anticipating billions of dollars in revenue from offshore natural gas discoveries to start flowing this decade, though an Islamic State-linked insurgency in the north has delayed the projects by years.

Zambia: Finance Minister Situmbeko Musokotwane yesterday sought approval from lawmakers for a ZMW 19.6bn supplementary budget for 2021. According to the Musokotwane, ZMW 12.5bn of that amount is for local currency bonds that the government issued to pay arrears to suppliers of fuel and the government’s farmer-input support program. Lawmakers will consider the proposal today. Note, the supplemen-tary budget proposal is separate from additional spending plans of ZMW 19.3bn approved on December 16 last for items, including settling arrears and coronavirus vaccines.

Forex: Ghanaian Cedi gains back some ground however the broader bearish bias remains

The Ghanaian Cedi has traded on the front foot on the week thus far, with the local unit rebounding to pare recent losses. For context, the GHS appreciated over the past two days. Gains of around 0.99% yesterday saw the GHS move further away from the recent record low of 6.1825. On a month-to-date basis, the GHS is the third best performing African currency against the USD, up by 1.49%. Only the Zambian Kwacha (+7.92%) and Angolan Kwanza (+1.55%) have fared better.

While the GHS is expected to rebound modestly as 2021 draws closer to an end on the back of the recent concessional funding package from the European Investment Bank and interventions from the Bank of Ghana's forward FX auctions, it is worth noting that a broader bearish bias remains entrenched.

The GHS has been the second-worst performing currency in the West-North Africa FX complex, down by -2.86% on a year-to-date basis. In the broader Africa FX complex tracked by Bloomberg, the GHS is ranked as the 9th worst-performing currency out of 23. A rebound in economic activities has weighed on the GHS given the economy's structure which is largely dependent on imports. Improving business activity has revived demand for dollars from companies in the commerce and manufacturing sectors, which far outweighs supply. Moreover, some foreign investors' recent exit of the country's bonds has also detracted from the local unit. The GHS weakness has therefore pushed up import costs and poses further upside risks to the inflation outlook. Note, inflation in Ghana has been above the central bank's 6-10% target for the three months in a row, in part driven by GHS weakness. 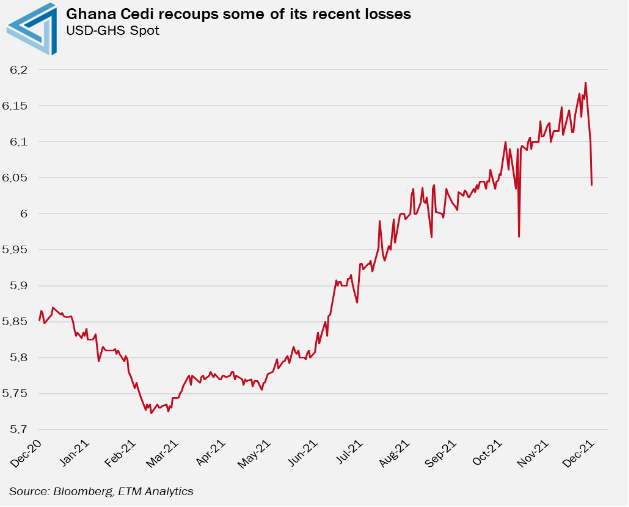 Bond yields across the globe are higher as we head into the final couple of trading sessions before the Christmas -New Year lull. The broader macro drivers include inflationary pressures, fragile fiscal metrix and central banks that are slowly removing themselves as buyers of bonds and quantitative easing programmes.

These pressures have filtered through to frontier markets who by definition need to provide higher yields in order to compensate investors for the additional risks in holding these assets. Many African countries fit into the category of emerging and frontier markets so the pressures will be manifesting in some way across most of the region.

Zambia for example has seen its sovereign curve trading anywhere between 27bpts and 55 bpts higher by yesterday’s close depending on which tenor you focused on. The most aggressive selling took place in the front and belly of the curve while the longer dates experienced less pressure.

The trend of bearish flattening in many countries is hard to buck at the moment given the fact that inflation remains intact as we exit 2021 driven by higher energy costs, higher food prices, and supply chain bottlenecks. We expect this trend to continue for much of the first quarter of 2022 as monetary policy is adjusted to take into account the new economic realities that we face and yields adjust accordingly.

There is a deluge of data coming out of Ghana today which will give us insight in the fiscal position of the country as well as the trajectory going forward. We have GDP for Q3 coupled with PPI, Money Supply and Gross Reserves pencilled in for today. The highlight as always is GDP even though it is historic in nature, economist’s have primed the market for a year on year reading of 3.5% which is lower than the 3.9% recorded previously. That said, at the last Bloomberg poll the market forecast total expansion for 2021 at 4.1% while predicting that 2022 will see growth coming in at 5%.

The markets will equally keep a close eye on the growth in money supply and how this filters through to the inflation readings going forward. Market expectations are for stubbornly high inflation rate with CPI expected to average 9.5% this year and 9% in 202. This brings us to the release of the PPI data which will give insight into the factory gate pressures currently experienced. The higher input costs from energy and logisitics are ever present and we are not predicting a pull back anytime soon.