The USD has retreated off its recent highs as it takes a breather. It has responded constructively to a shift in monetary policy expectations, while recently strong data has only served to exacerbate the USD's move. However, one should not make the mistake of believing that this trend will remain intact indefinitely. There is a lot of hawkishness priced into the USD, and it is far from clear that the USD has much further to go once the narrative for other central banks starts to turn equally hawkish. On the contrary, there is asymmetrical risk building that the USD will not sustain current levels indefinitely.

Mozambique: In line with expectations, the Monetary Policy Committee voted in favour of leaving the policy rate, MIMO, unchanged at 13.25%. The MPC said in its policy statement that the decision was supported by the maintenance of in­ation prospects at a single digit, notwithstanding the prevalence of high risks and uncertainties stemming, especially from rising food and liquid fuel prices, and supply chain constraints in the international market. On the growth front, policymakers noted that economic growth prospects for 2021 and 2022 have improved. The central bank said that economic activity expanded by 3.4% in Q3, driven by the expansion of all sectors of economic activity. Optimism over the growth outlook continues to be underpinned by foreign demand and the implementation of gas projects in the Rovuma Basin. The central bank noted that sustainable economic growth would continue to require deepening structural reforms in the economy towards strengthening institutions, improving the business environment, attracting investments and creating jobs.

Africa: Moody's yesterday painted a sombre outlook for Sub-Saharan Africa. Moody's said the outlook over the next 12-18 months is negative due to fragile economic recoveries, persistent external risks, and limited scope for adjustment. According to the agency, while economic growth for the region will accelerate marginally in 2022, "it will be insufficient to recoup the output and income losses triggered by the pandemic." Meanwhile, knock-on effects will keep fiscal deficits and borrowing requirements elevated next and the debt burden high. Moody's added that "in the absence of further international support, debt affordability will likely weaken further, intensifying liquidity pressures and external vulnerability risks, particularly given the limited capacity of domestic banking systems to provide finance as Eurobonds mature over the next few years."

Angola & Nigeria: Moody's said that the transition from fossil fuels to cleaner energy will weigh on government revenue in Angola and Nigeria given the lack of diversification in the economies of two of Africa's largest oil producers. With oil and gas accounting for more than 50% of revenue in Nigeria and 90% of export earnings in Angola, Moody's added that lower global demand will pressure these economies absent of any clear diversification strategies. Moody's also said that while hundreds of countries and companies seek to achieve net-zero carbon-dioxide emissions by about 2050, the transition is likely to be gradual.

Ethiopia: US Secretary of State Antony Blinken has warned that conflict in Ethiopia threatens regional security. Blinken was quoted as saying, "the conflict threatens not just that country but its neighbours as well." Blinken further called for the efforts to end the year-long conflict to be intensified. The conflict has been raging in Ethiopia since Prime Minister Abiy Ahmed ordered an incursion into the northern Tigray province last November after forces loyal to the regional administration attacked a federal army base. The fighting has spilt into neighbouring regions, claiming the lives of thousands of people, displacing hundreds of thousands more, and leaving millions in need of aid. African Union Envoy Olusegun Obasanjo is spearheading efforts to broker a cease-fire while the US and EU are considering sanctions.

Zimbabwe: One of the key takeaways at the end of the IMF's virtual mission was that Zimbabwe must restructure its external debt of more than $10bn before it can receive any fresh credit lines from the institution. The IMF mission chief for Zimbabwe, said that the IMF is unable to provide financial support to Zimbabwe due to unsustainable debt levels and official external arrears. Note, government debt was at 86% of GDP in 2020, according to the IMF.

Forex: Ugandan Shilling moderately overvalued according to the IMF

The International Monetary Fund yesterday provided a brief assessment of Uganda’s economy and its currency. According to the IMF, the Ugandan Shilling (UGX) is moderately overvalued, and the authorities should only intervene in periods of “extreme” distress. However, the IMF stopped short, saying the level of overvaluation and noted that “given uncertainties linked to the coronavirus pandemic and recent appreciation of the exchange rate, the level of overvaluation was still being determined and will be updated during the forthcoming mission.” The lender’s mission to Uganda in December will also evaluate the country’s “reform agenda” and will then discuss the next tranche of a 3-year $1bn loan. 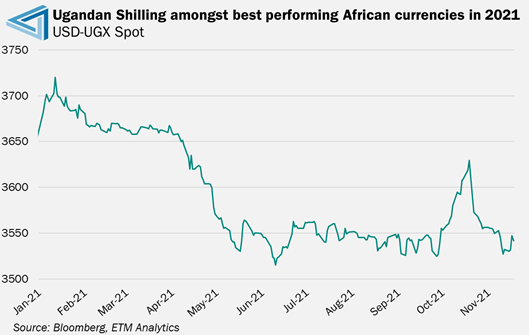 The IMF also said that “greater foreign-exchange flexibility would help reduce the overvaluation, and it is recommended that authorities continue intervening only in case of extreme market distress.” Note that the UGX has been fairly resilient in 2021. For context, the UGX is the best performing East African currency and is ranked fifth in the broader African currency basket tracked by Bloomberg, up by 3.11% against the USD on a year-to-date basis.

The notable UGX strength has stemmed from hard currency inflows from remittances and exports of commodities like coffee. Moreover, the prudent monetary policy stance of the Bank of Uganda has translated into a high real rate that further added to the currency’s resilience. For context, Uganda’s real rate currently stands at 4.6%, which is one of the most attractive on offer and has increased the UGX’s carry appeal. Looking ahead, while the outlook for the UGX remains favourable, gains could, however, be curbed by a persisting trade balance deficit amid a decline in gold exports and the rise in global oil prices, which has spurred dollar demand, especially from local oil importers.

Ghana’s Finance Minister delivered a mixed message yesterday. While concerns over Ghana’s fiscal outlook have intensified over the past year and a half amid growing signs that if nothing drastic is done, the country could slip into a position of fiscal distress, Finance Minister Ken Ofori-Atta laid out plans to reduce the budget deficit, boosting economic growth and putting the country on a more sustainable debt path. However, investors were left asking whether enough was being done to rein in the country’s ballooning debt pile. 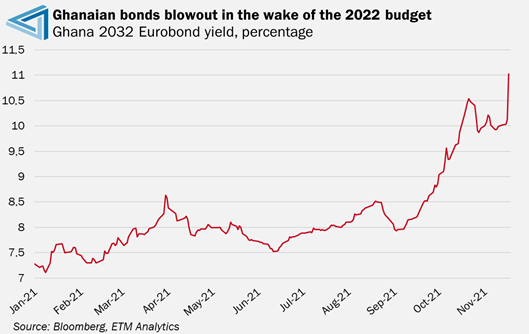 In his presentation to lawmakers, Finance Minister Ofori-Atta said the government will implement measures to boost revenue and rationalise expenditure, leading to a lower fiscal deficit of 7.4% of GDP in 2022 compared to 12.1% of GDP in the current year. Ofori-Atta noted that the 2021 deficit figures include legacy financial and energy sector debts. Note that excluding the legacy cost, the 2021 figure would stand at 9.4% of GDP. National Treasury forecasts that total revenue and grants will surge 43% in 2022 to GHS 100.5bn or around $16.6bn, while expenditure is projected to rise 23% to GHS 137.5bn in 2022. The budget was based on an economic growth forecast of 5.8% for 2022.

While Finance Minister Ofori-Atta signalled that the government is going to work its way out of its sticky debt position judiciously, we caution investors that the budget was not as austere as one would’ve hoped for, given how severe the fiscal degradation over the past year has been. It is also worth pointing out that the 2022 budget deficit target is well above the government’s fiscal rule of a budget deficit of less than 5% of GDP.

Going forward, we still assess fiscal risks in Ghana to be skewed firmly to the upside. This comes against the backdrop of expectations for the economic recovery to remain fragile and uneven, suggesting that revenues could once again undershoot expectations. In conclusion, there were some positive signs that the government is looking to return to a sustainable debt path. However, we fear that not enough will be done to rein in the country’s ballooning debt pile. Therefore, debt distress risks remain significant, albeit slightly less than was the case prior to yesterday’s budget.

Macroeconomic: SARB MPC rate decision – a close one to call, but we expect a 25bps rate hike

The outcome of the November SARB MPC rate decision on Thursday is one of the hardest to call in recent times, given the number of factors supporting both a rate hike and a hold. That said, the start of the SARB’s tightening cycle is inevitable as inflation continues to run hot and central banks across the globe hike rates. The big question for markets at the moment is whether the SARB pulls the trigger on a rate hike this month or waits until the start of next year to begin tightening policy. 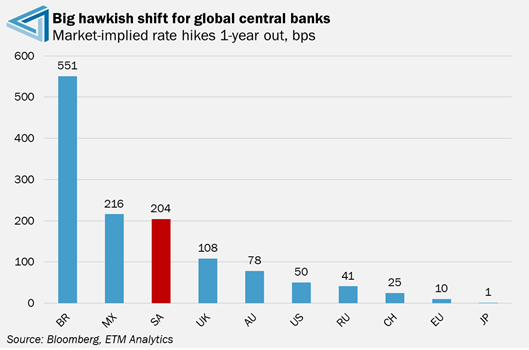 As mentioned in ETM’s Interest Rate Outlook released last week, we assess the risks to be skewed in favour of a rate hike on Thursday. Policymakers will want to move pre-emptively to protect the ZAR and SA from an inflation episode while at the same time keeping inflation expectations anchored and re-establishing a positive real interest rate.

A 25bps rate hike will help restore some stability in the ZAR and will be a sign to investors that the central bank remains committed to its primary goal of achieving price stability. From an economic perspective, a 25bps rate hike will have little impact on the economy, given just how accommodative the SARB’s current policy stance is. Note that even if the SARB were to hike rates by 100bps, monetary policy would still be viewed as accommodative or neutral at the most.

For a country like SA that lives with higher levels of currency volatility, there is a need to keep interest rates attractive constantly. The difficulty will be finding the right balance between tightening monetary policy sufficiently to offer the ZAR some protection and not doing too much to impact GDP growth negatively. That is why the SARB will want to move slowly in small 25bp increments instead of being forced to raise the rate more aggressively over a shorter time. Therefore, we expect that the SARB will begin gradually normalising policy from this month’s MPC meeting.