Ghanaian bonds back on the defensive, USD hits a two-decade high

Although global inflation will naturally moderate due to high base factors already being absorbed, tightening monetary policy in such a heavily indebted economy could see inflation reverse faster through H2 2022. Equally, companies reporting overnight have given a glimpse into their headwinds. Apple and Intel have warned of supply constraints, while Amazon shares have responded to a weak forecast given soaring fuel costs and inflation that has impacted its warehouse costs. US Treasury yields have stalled their slide this week, and yields appear to have stabilised, while the overall curve is again looking to invert. The main message is that this phase of USD appreciation will also pass and while it is difficult to predict exactly when one should not expect it to continue indefinitely. Exporters should recognise the opportunity that it presents and utilise these better periods to cover forward.

Africa: The World Health Organisation (WHO) yesterday reported that coronavirus infections on the African continent this week increased for the first time in more than two months, largely driven by a doubling of cases recorded in South Africa. The African continent had been experiencing a lull in infections, with WHO earlier this month pointing to the longest-running decline in weekly infections on the continent since the onset of the pandemic. However, since last week infections have started to rise in South Africa, the country that has recorded the most infections and deaths in Africa to date, and health authorities, there are monitoring for signs of a fifth infection wave. WHO therefore urged people across the continent to get vaccinated as this will likely limit further waves and prevent disruptions to economic recovery prospects on the continent.

Central African Republic: Becoming the second country after El Salvador, the Central African Republic has declared Bitcoin legal tender. According to a spokesperson from the President's office, "crypto money including Bitcoin is now considered an official currency in CAR." The spokesperson added that "by legalising the use of Bitcoin, CAR hopes to attract investors," and its use will ease money transfers that can sometimes be complicated in CAR. Note that currency markets are plagued by a number of structural and systematic challenges, particularly in Africa. Issues such as currency illiquidity and excessive levels of volatility have for decades had a significant impact on economies, trade, and the ease of doing business. Therefore, digital currencies and cryptocurrencies are increasingly seen as offering a real-world solution to some of the key currency challenges on the continent.

Kenya: Headline inflation in Kenya rose by more than expected in April, coming in at 6.5% y/y from 5.6% y/y in the month prior. This surpassed consensus expectations of 5.7% y/y and was the fastest pace of price growth in the economy since September 2021. The spillover from the Ukraine war is fanning inflation, with prices of cooking oil, wheat, fertiliser, and fuel soaring. Kenya imports about 44% of its wheat from the two countries. The food and non-alcoholic drinks index, which comprises a third of the inflation basket, rose 12.2% from a year ago, compared with 9.9% a month prior. With inflation moving closer toward the top of the central bank's 2.5-7.5% target range and risks tilted to the upside, policymakers may consider raising the key rate at the May meeting.

Nigeria: Joining an exodus of supermajors from onshore fields, Total announced yesterday that it would put up for sale its minority stake in a Nigerian oil joint venture. Total will offload 10% in a firm that holds 20 onshore and shallow water permits in the country. Oil majors have been selling onshore and shallow water assets to Nigerian independent producers for more than a decade. That process is accelerating, with Exxon agreeing in February to sell some of its Nigerian assets to Seplat for at least $1.28bn. International firms want to focus on deep-water fields away from the difficulties of operating in close proximity to local communities.

Uganda: Uganda is reportedly considering two instant coffee plants to boost revenue. According to an official from the Uganda Coffee Development Authority, the government is undertaking feasibility studies for plans to support private investors into setting up two soluble plants in the next five years. Note that the government is hopeful of the plans even after failing to attract investors for soluble coffee for nearly three decades. The plants are set to boost the value of earnings for the country, where green beans constitute 95% of its coffee. Uganda imports instant coffee for domestic consumption.

South Africa: Finally, the USD-ZAR cracked through the 16.00 handle yesterday, although again, it happened in thinned out holiday trading conditions that will extend through today. Significantly, the move was not sustained through overnight trade, and the pair has settled back below the handle this morning. Technically it could retest that level again today, but equally, it could reverse after another bad week for the ZAR, but when where it lost some of its momentum.

The USD yesterday extended its rally, reaching its highest level in two decades as its rivals, such as the Japanese Yen and EUR, weakened. The dollar index, known as the DXY, extended its winning streak, gaining 0.65% to close north of the 103 mark. The dollar strength came on the back of the Bank of Japan doubling down on its dovish policy, which saw the USD strengthen past the key level of 130 against the JPY. BoJ Governor Kuroda’s speech was dovish yesterday, with the central bank head saying that the bank would remain ultra-accommodative for the economy to recover. 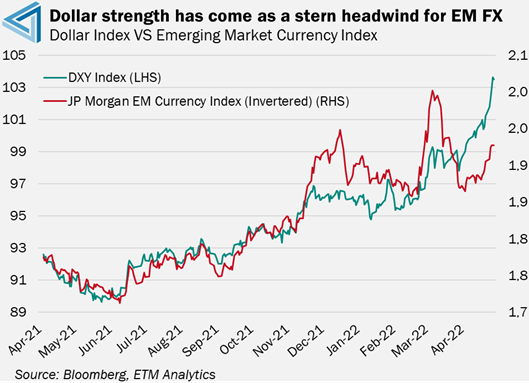 Yesterday’s BoJ comments further drove a rally that has seen the DXY gain over 5% on a month-to-date basis. The Federal Reserve is set to embark on the first of many 50bps interest rate hikes next week. These expectations have underpinned the USD rally, consequently weighing on the emerging market currencies. For context, the MSCI EM FX index has lost over 3% this month and is at its weakest level in 17 months. Concerns about slowing economic growth in China due to its prolonged coronavirus lockdowns as well as rising inflation pressures have also hurt emerging markets.

With the economic impact of the Russia-Ukraine war stretching out beyond what was initially expected, China’s ‘zero-COVID’ policy and heavy-handed lockdowns, and the Fed’s plans for an aggressive monetary tightening cycle, the USD is set to remain supported in the near term. This suggests that risks are tilted to the downside for emerging and frontier market currencies, especially those with weak fundamentals.

Ghanaian bonds are back on the defensive as external headwinds intensify and the sustained sell-off in the Cedi continues to compound Ghana’s fiscal challenges. The resurgence in Ghanaian bond yields comes despite the stronger than expected recovery in the economy in 2021, with downside growth risks intensifying at the start of 2022. For context, Ghana’s 2026 Eurobond yield has surged almost 300bps higher since the start of the month to trade at 16.33%, according to Bloomberg data.

Ghanaian bond yields are trading in fiscal distress territory at these levels as traders continue to demand a massive fiscal premium for holding Ghanian debt. Ghana’s debt has exploded over the past decade due to persistent revenue misses, fiscal mismanagement and excessive spending. Ghana’s debt to GDP ratio has ballooned over the past decade, rising from 50% in 2012 to an expected 84% of GDP in 2022, according to the International Monetary Fund’s latest forecast. The IMF expects the upward trajectory in Ghana’s debt to persist in the months ahead, with the debt to GDP ratio expected to surge to 88.4% by 2026. 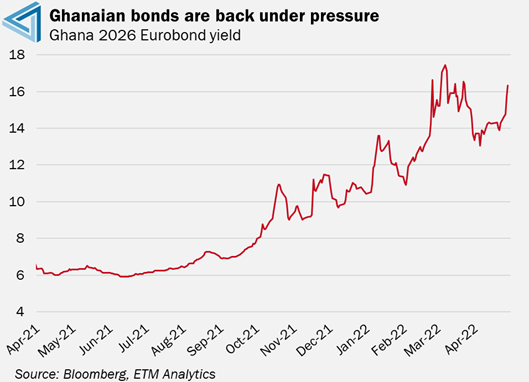 Ghana has been hit hard by the covid pandemic and, more recently, the war in Ukraine. This comes on the back of tightening global monetary conditions, which has amplified the country's debt issues. Recall that Ghana has been refinancing a large portion of its debt and funding a portion of its budget in the international debt market. However, the hawkish pivot from developed market central banks and escalation in fiscal concerns has made it too expensive for Ghana to tap the international debt market, compounding debt risks.

As mentioned recently, while the government has deployed some reforms and measures aimed at moving towards a more sustainable debt position, the fiscal outlook for Ghana remains gloomy, with debt expected to continue rising at a concerning rate in the years ahead. As such, until the government adopts more drastic reforms, we expect a significant premium to remain baked into Ghanaian bonds. That said, at these levels, Ghanaian bonds seem attractive if the government continues with its reform agenda. This topic will be unpacked in more detail in our latest structuring note scheduled for release in the next few days.

The Monetary Policy Committee raised the yield on the seven-day central bank certificate, the bank’s main monetary operations instrument, by 51 bps to 1.65% to help anchor inflation expectations within the economy. The central bank said that the latest Business Expectations Survey shows that businesses feel that inflation is rising higher and higher. Governor Moses Pelaelo said on Thursday that the central bank sees the new rate as a better mechanism for influencing monetary policy in the economy and bringing inflation expectations back under control. 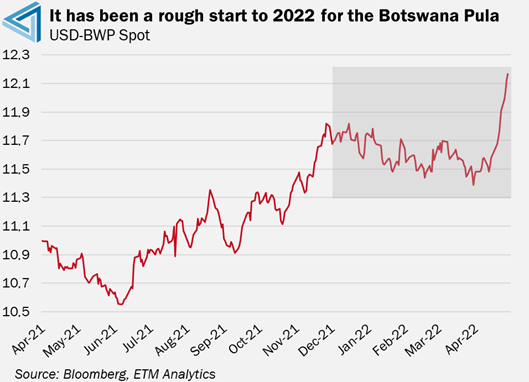 Headline inflation in Botswana has breached the central bank’s target of 3%-6% since May last year, averaging 10.4% in the first quarter of 2022. Soaring external price pressures stemming from elevated commodity prices and ongoing supply chain pressures are underpinning the strong episode of inflation we have seen in recent months. The war in Ukraine is compounding external price pressures with Ukraine and Russia significant exporters of food and energy commodities.

The central bank noted that upside risks to the inflation outlook remain high and include increases in international commodity prices beyond current forecasts, global supply bottlenecks, Russia’s invasion of Ukraine and second-round effects of increases in local administered prices. In addition to reining in inflation expectations, the bank said that higher rates should also stem the depreciation in the Pula, which is among the worst-performing African currencies this year.