US Treasury yields rebounded yesterday, with the focus turning to upcoming debt sales as well as tomorrow’s FOMC meeting. Benchmark UST yields climbed almost 10bp on the session yesterday, while 2yr yields climbed back above the 3.00% level as investors look to push up yields ahead of the debt sales this week. Beyond the sales, however, the outlook for longer-dated US bonds remains quite bullish, with recession fears building amid continued weak economic data. Inflows into maturities 10 years and longer have also reached their highest for this year so far, indicating that bullish sentiment is rising. Investors are also piling into calls on large ETFs that track the UST market, corroborating the positive outlook for US debt.

Bund yields, meanwhile, were largely steady yesterday despite calls from some ECB members for another large hike at the September MPC meeting. The market has already priced in a very aggressive ECB, with over 112bp of hikes expected over the next three months according to 3-month interest rate swaps. Therefore, it may take a lot more hawkish talk for German yields to rise significantly from their current levels.

Africa: The International Finance Corporation, a private sector arm of the World Bank Group, yesterday reported that it had provided record financing of $9.4bn in investments between July 2021 and June this year across 36 sub-Saharan African countries. According to the lender, the financing helped develop regional pharmaceutical manufacturing, increase intra-Africa trade, expand access to climate financing, and strengthen food security. The lender added that it had stepped up its funding as a strong and engaged private sector is indispensable to helping countries and companies navigate challenges such as the persisting effects of the coronavirus pandemic and, more recently, rising global inflation.

Ethiopia: The Ministry of Trade and Regional Integration reported that Ethiopia’s 2021/22 export earnings rose by 14%. Specifically, Ethiopia recorded $4.1bn in export earnings in the fiscal year through July 7, higher than the $3.6bn in the previous year. Agriculture contributed 72%, while mining and industry accounted for 14% and 12%, respectively. While exports earnings increased, they missed the government’s target of $4.6bn.

Ghana: Speaking to reporters yesterday, Bank of Ghana Governor Ernest Addison said the government might need up to $1bn to conclude the financial sector cleanup it started in 2017. According to the Governor, “ We’ve cleaned up the sector of all the weak and insolvent institutions, and then we find out now that there are a few more institutions that are also insolvent and weak, unfortunately at a time when the government’s finances are under a lot of stress.” Addison added that this issue was likely to come up in economic support negotiations with the International Monetary Fund saying, “I’m sure this issue would be one of them and hopefully we would find the resources which would allow the central bank essentially to deal with that problem.”

Uganda: Uganda’s National Oil Company expects TotalEnergies SE and Cnooc Ltd. to begin drilling oil fields by the end of this year and be on course to commence production in 2025. Civil works have been completed at the Tilenga development project operated by TotalEnergies, while rigs have been procured for the Kingfisher project managed by Cnooc. Landlocked Uganda will ship its crude through a pipeline via Tanzania, with some oil reserved for a planned local refinery targeting domestic and regional markets. According to the energy minister, oil output will spur GDP growth to 9-10% in the peak year of production above 7% if oil is discounted.

Uganda: Bank of Uganda Deputy Governor Michael Atingi-Ego has said that the Ugandan public will continue enduring a high cost of credit for as long as the current inflation and foreign exchange rates continue skyrocketing. The comment comes after calls by the private sector, especially the manufacturers, that they need easier and cheaper sources of financing to grow output, increase exports and, in turn, help the speedy recovery of the economy. Recall the BoU raised the policy rate to 8.5% at the beginning of July, and this came just a month after the previous increment due to the spike in inflation, unlike the usual reviews that happen after every two months. Atingi-Ego added that if the rates of borrowing are not controlled by making money costly, it will create worse effects for the private sector, suggesting tight monetary conditions will remain a feature for the foreseeable future.

The latest data from the Bank of Ghana shows that gross reserves fell further in June. Specifically, gross reserves fell for the fifth straight month, coming in at $7.7bn in June from $8.1bn in May. The June level of reserves equated to 3.4 months of import cover and was the lowest since February 2019. Moreover, the decline in June added to the year-to-date drop of over 20% in the level of reserves. 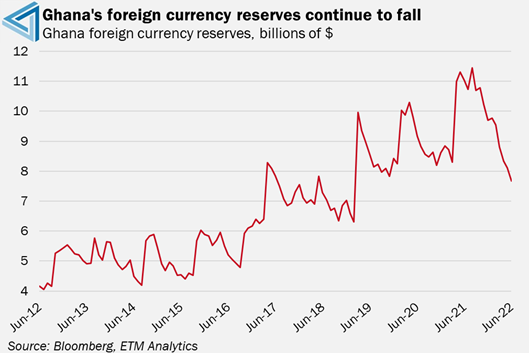 Ghana’s reserves have declined in part due to the central bank trying to intervene in the FX market to slow the depreciation of the Ghanaian cedi. Despite the central bank’s efforts, the cedi has depreciated over 33% against the USD since the start of the year, making it the worst performing African currency tracked by Bloomberg. The sharp sell-off in the GHS has been driven by a worrisome fiscal outlook further compounded by challenging external conditions weighs. Ghana has been able to issue Eurobonds in recent years, which has bolstered its reserve position and allowed policymakers to support the currency. However, tightening global financial conditions triggering higher borrowing costs has made it difficult for Ghana to access international capital markets, and this has also pressured reserves.

Given that Ghana is unable to access the international capital market, risks remain tilted to the downside for gross reserves in the near term. This suggests that the central bank’s ability to use reserves to cushion against liquidity constraints and defend the currency may be constrained going forward.

The bearish bias in Ghanaian bonds remained entrenched on Monday even after the Bank of Ghana’s Monetary Policy Committee unexpectedly voted in favour of leaving its benchmark interest rate on hold at 19.00%. Note that four out of the ten economists’ surveyed by Bloomberg expected the BoG to hike rates by 100bps, while two were expecting the central bank to hike by 200bps. According to Governor Ernest Addison, the decision to keep rates on hold came amidst signs that inflation is levelling out.

The BoG signalled that if inflation is not peaking, it should peak soon. Governor Addison added that the signs of slowing inflation come on the back of high-frequency data showing that the economy is slowing. Ghana’s economy-wide PMI, which we use as a proxy for the health of the economy has been in contractionary territory since February. Commenting on the outlook for the economy, the MPC said that it expects the economy to expand by between 3.7% and 4.5% in 2022 down from 5.8% previously. 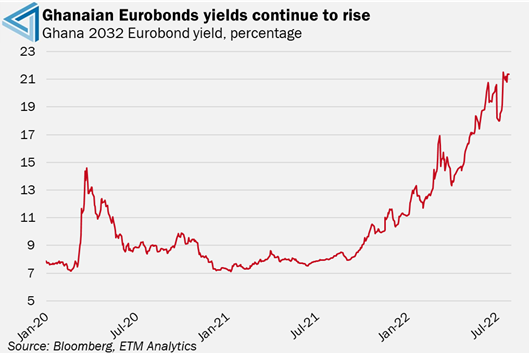 Finance Minister Ken Ofori-Atta meanwhile cut his growth forecast to 3.7% in the medium-term budget update from 5.8% previously. While at first glance investors would’ve taken some comfort in the fact that the Finance Ministry lowered its fiscal deficit target to 6.6% of GDP from 7.4%, in nominal terms, the budget deficit is now expected to reach GHS 38.9bn compared to GHS 37.0bn previously. Moreover, interest payments were revised higher to GHS 41.1bn from GHS 37.4bn on account of inflationary pressures and exchange rate depreciation resulting in higher costs of financing.

Addressing the while elephant in the room, Finance Minister Ofori-Atta said “although the deficit is expected to be financed from both foreign and domestic sources, domestic financing will be the key driver while the government works to regain external market access.” All in all, the developments that occurred both on the monetary and fiscal policy fronts yesterday speak to more pain ahead for the cedi and suggest that investors will continue to demand a massive premium for holding Ghanaian bonds.

According to official figures published by National Treasury, the cancellation of the planned $1bn Eurobond issuance and weaker-than-expected revenue collections left Kenya with a budget shortfall of $2.16bn. The document published by National Treasury showed that Kenya’s total revenue for the recently concluded 2021-22 fiscal year came in at KES 3.06trn, KES 270bn below estimates. While total revenue disappointed, it is worth pointing out that tax income revenues rose 24% in the 2021-22 fiscal year to KES 1.84trn. 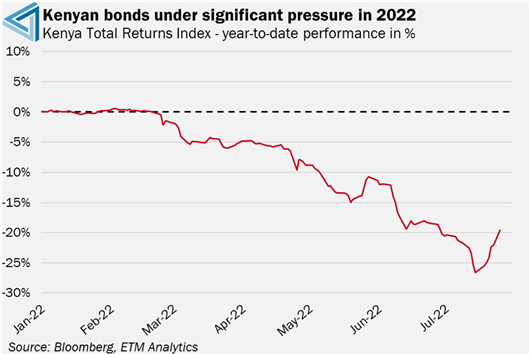 The National Treasury report showed that Kenya spent KES 1.04trn or the equivalent of around 57% of tax income on debt servicing costs in the 2021-22 fiscal year. The combination of the deteriorating fiscal dynamics and uncertainty ahead of the upcoming presidential election against the backdrop of persistent external headwinds drove the USD/KES to a fresh high on Monday. Since this time last year, the USD/KES has lost almost 10% against the USD, putting it among the worst performing African currency over the period.