Ghana turns to gold buying to support its depreciating currency

Copper has come under pressure this morning as investors align comments from the Fed Chairman with reduced economic dynamism. Equally data out of China has not been positive lately, and the latest data namely new home prices in April fell for the first time since December on a month on month basis as the COVID-19 lockdowns took their toll.

Bullion is sliding towards the $1800.00/oz mark as investors focus on the trajectory for US rates following stern comments from the Fed Chairman yesterday. Fed Chair Jerome Powell stated that the central bank would hike rates as high as needed to stop the surge in domestic inflation which he stated threatens the foundation of the economy. This hawkish tone in turn buoyed US Treasuries and in turn took the shine off the yellow metal.

Zambia: The Bank of Zambia (BoZ) is set to decide on its policy rate today. With inflation slowing for a ninth consecutive month in April to a two-and-half-year low, policymakers at the BoZ are likely to vote to keep the policy rate unchanged at 9%. This will support the economy's recovery and may aid the Zambian Kwacha, which has strengthened against the USD since April, helping offset price pressures from rising gasoline and wheat costs.

Botswana: News on the wires is that the Botswana energy company Botswana Oil is planning to construct a new coal-to-liquids plant in a bid to reduce its reliance on imported fuel. The investment needed for the public-private partnership will be in the region of $2.5bn and is expected to have a production capacity of 12 000 barrels of diesel and gasoline per day. Strategically the project makes perfect sense. Botswana is estimated to have nearly 212 billion tonnes of coal reserves while it imports nearly 7.5 million barrels of fuel per year to meet its needs.

Angola: Speaking yesterday, Finance Minister Vera Daves de Sousa expressed optimism that the government's initial public offering (IPO) of shares in Banco BAI, the country's biggest bank, will draw sufficient investor interest to succeed, even as rising interest rates and sharp market swings have prompted many to steer clear of new listings. BAI's debut on the Luanda stock exchange on June 9 will mark the start of equity trading in the country.

Ethiopia: Ethiopia missed its export earnings target for Q3. Specifically, export earnings jumped 20% y/y to $2.95bn vs a target of $3.2bn in the third quarter through April 7. Agriculture contributed the largest share at 69%, while industry and mining accounted for 16% and 15%, respectively. Meanwhile, in a separate statement, the tax authority collected ETB 351.9bn of revenue in the third quarter through April 7, which was 95% of the target of ETB 372.1bn. The amount compares with ETB 308bn collected a year earlier.

Nigeria: Central Bank Governor Godwin Emefiele has ended his bid to become the country's next president after missing deadlines set by the All Progressives Congress and President Buhari to formalize his candidacy and resign from the bank. Emefiele had sparked outrage when his lawyers asked a federal court for a ruling permitting the governor to remain at the head of the central bank while competing in the APC's upcoming presidential primaries. By remaining in the post beyond May 16, Emefiele has abandoned his brief campaign for the highest office in the land.

Zimbabwe: The Reserve Bank of Zimbabwe yesterday lifted a 10-day ban on bank lending, which was announced by President Mnangagwa in a bid to halt the sell-off in the Zimbabwe dollar. According to critics, the bank has shattered confidence in the already struggling economy and weighed on economic activity with agri-processing companies, including sugar mills, saying they couldn't advance funds to farmers to grow their crops. That led to a gradual relaxation, with the government first saying it didn't apply to commodities and then allowing citizens with access to foreign currency to import their own goods.

South Africa: Given the Fed's aggressive stance and the ZAR's recent vulnerability, a 25bp hike may disappoint, and the ZAR could come under renewed pressure. A 50bp tightening is largely priced-in given the market consensus where 60% of economists are calling for a larger rate hike. The risks are asymmetric and favour a weaker ZAR, although so much will depend on the performance of the USD. Also of interest today will be the release of the latest inflation data for April and the retail sales for March. The former will be the main event, with the market anticipating another 5.9% inflation reading. Anything softer than this may negatively impact the ZAR if it strengthens the argument for a smaller rate hike. Core inflation remains comfortably below the SARB's mid-point, and there are no demand-pull inflationary pressures for the SARB to fight.

Forex: Ghana turns to gold buying to support the Cedi

Bank of Ghana Governor Ernest Addison yesterday said that the country has started a bulk gold-buying programme. Ghana will buy gold locally to raise the gold component of its reserves in a bid to strengthen the Ghanaian Cedi without increasing inflation. Addison said, “we have started a bulk purchase program, where we buy gold locally and try to raise the gold component in our level of reserves. This is where the currency focus is.”  Note that despite tightening monetary policy efforts by the Bank of Ghana, data last week showed that inflation surged to the highest level in almost two years. Recall the BoG hiked its policy rate by 250bps in March. 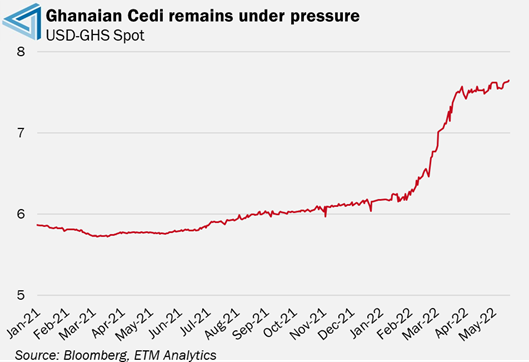 Fiscal measures and strategies taken by the BoG have also failed to meaningfully support the Cedi, which remains the worst-performing African currency tracked by Bloomberg against the USD on a year-to-date basis. For context, the Cedi has lost over 19%, which is around 5% more than the second worst-performing currency, the Egyptian Pound. A gloomy fiscal outlook has weighed down the Cedi, with debt expected to continue rising at an alarming rate despite recent government interventions. This triggered a rotation out of cedi bonds by foreign investors in Q1, while the tightening of global financial conditions has compounded pressure. According to Reuters data,  the Cedi saw the worst depreciation against the dollar of any currency besides the Russian ruble in the first three months of 2022.

The purchasing of gold is likely to boost Ghana’s reserves, which have come under some notable pressure. Since August 2021, reserves have fallen by nearly 17%. Ghana has been able to issue Eurobonds in recent years, which has bolstered its reserve position and allowed policymakers to support the currency. However, worsening fiscal dynamics and tightening global financial conditions suggest Ghana may not be able to issue Eurobonds going forward and may therefore have less ammunition to support the Cedi.

Global risk appetite recovered yesterday as investors cheered news that China has set out a roadmap for the end of the painful lockdown in Shanghai, which has been one of the main factors underpinning growth concerns at the moment. It is hoped that the city will be fully operational by the 1st of June 2022. This has resulted in an upbeat mood for traders who have had a gloomy few weeks. 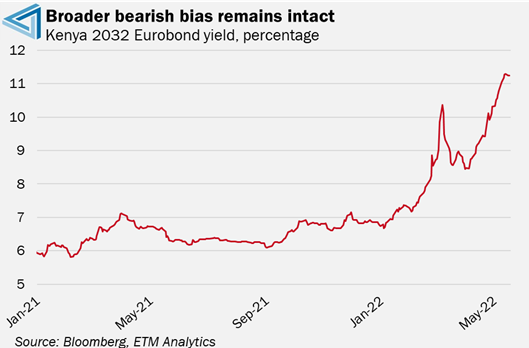 The improved external backdrop provided some temporary reprieve for risk assets, which include Kenyan bonds. While Kenyan Eurobond yields nudged lower yesterday, the broader bearish bias remains intact on the back of mounting fiscal risks, soaring global inflation and the hawkish pivot from major central banks. Notwithstanding yesterday's move, Kenya’s 2032 Eurobond yield has surged 451bps higher since the start of the year to sit at 11.26% at the time of writing. Yields across the Kenyan bond curve are expected to continue rising in the months ahead unless inflation pressures ease and there is a meaningful shift to a more sustainable fiscal trajectory from the government. However, this is unlikely to be the case with an election on the horizon. The favourite presidential candidate has already made some remarks that have raised the hairs of fiscal hawks.

One of the main concerns for investors is Kenya’s fiscal degradation over the past decade. High debt servicing costs are crowding out the government’s ability to spend in other areas of the budget, including health care, education and growth supportive infrastructure projects. Data published on Treasury’s website this week showed that Kenya’s debt grew by14.5% y/y to KES 8.4trn by the end of March. Treasury attributed the rise in debt to external loan disbursements, exchange rate fluctuation, and uptake of domestic debt. Gross domestic debt rose 17% y/y to KES 4.19trn in March, while external debt rose 6% y/y to $36.6bn in March

Unless the government is able to lower its debt service to revenue ratio and rein in its ballooning debt pile, investors will continue to demand a massive premium for holding Kenyan bonds. The Kenyan government could do this by boosting revenue and cutting expenditure. Therefore, until the government proves to investors that it is committed to reining in spiralling debt, the bearish bias in Kenyan bonds is expected to persist.

The USD corrected weaker yesterday in a move many would argue was long overdue. However, so long as the Fed threatened to lift rates and do so aggressively, the USD found the necessary support to power ahead, and a correction looked unlikely. After all, monetary policy disparities will only widen in the next two years, not narrow, or so the Fed would have us believe. 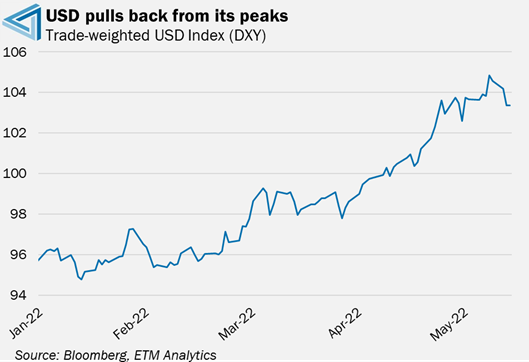 The result has been a USD that climbed to its highest level in two decades. A lot has been priced in, and one could argue that the move is justified, especially now, when the UK and Europe are facing one of their toughest periods, dealing with a combination of high inflation, weak growth and major geopolitical risks.

Whether this is the start of a big correction in the USD remains to be seen. Investors have experienced mini USD corrections in recent weeks, only for the USD to find fresh support and power ahead to fresh multi-decadal highs in the days that followed. But there is a tremendous amount of Fed tightening baked into the price. There cannot be much more left to price in. Any remaining appreciation may be related to the USD's safe-haven status rather than the pricing in of more tightening.

And the USD's safe-haven status will be important. Stock markets are looking particularly vulnerable, and there are enough headwinds to ensure that earnings will be tougher to come by. The resumption of a stock market slide in the trading sessions ahead could drive the USD stronger.