USD remains on the defensive ahead of the labour data scheduled for release through the week. The outlook for US monetary policy remains uncertain at this point, and despite the higher than expected inflation, investors are positioned for a Fed that is unlikely to tighten monetary policy any time soon given the weak state of the economy and the transitory nature of the inflationary pressures. This raises the significance and importance of the labour data starting with tomorrow's ADP reading and ending with Friday's payrolls data.

USD weakness also appears to be manifesting at an uncomfortable time for US authorities. Partly driven by supply-side disruptions as value chains remain constrained, but partly due to the weakness in the USD, US inflation has risen fairly sharply beyond market expectations and above the Fed's upper limit of their inflation target. For now, the move is considered temporary, and the Fed will not respond, but it is becoming clear that the weaker USD will drive the transmission mechanism for US inflation, and the constant grind lower in the USD will be raising some eyebrows.

Ghana: Ghana’s gross reserves rebounded sharply in April, coming in at $11.0bn y/y compared with $8.72bn in March. This translates into an import cover of 5.1 months. Ghana’s FX reserves are now sitting at a record high, according to Bloomberg data. This can be attributed to the massive Eurobond sale in March, which boosted foreign currency inflows and a rise in the gold price. The notable increase in the country’s FX reserves will increase the country’s protection from external shocks and will support the Ghanaian Cedi.

Kenya: Matching expectations, consumer price inflation in Kenya accelerated from 5.80% y/y in April to 5.90% y/y in May. Rising transport and food, and non-alcoholic drinks prices underpinned the rise in headline inflation in May. Although inflation nudged higher in May, it remains anchored within the Central Bank of Kenya’s inflation target range of 5% ± 2.5ppts. With the central bank expecting inflation to remain within the target band in the near term, we expect that the central bank will maintain its accommodative policy stance.

Zambia: Zambia’s government is reported to have raised corn prices by 36%. According to the Chairman of Zambia Food Reserve Agency Kelvin Hambwezya, the agency will pay Kwacha 150 per 50kg bag of white corn to replenish the country’s strategic grain reserves. This price is higher than the Kwacha 110 per 50kg that was paid last year. The increase in corn purchase prices comes despite the country recording a bumper harvest. The high corn purchase price will add to already elevated food prices, which are buoying headline inflation in Zambia.

South Africa: South Africa’s trade surplus narrowed to R51.2bn in April from a downwardly revised record high of R52.6bn (prior: R52.8bn) in March. The narrowing was, however, less than what consensus expectations had pencilled in of a decline to R37.5bn. It was underpinned by a less pronounced decline in outbound shipments in April when compared to imports. For context, exports fell by 3.9%  on the month to R161.5bn while imports contracted by 4.6% to R110.2bn. Although the surplus narrowed at the start of Q2, it remains near a record high as exports remain supported by high commodity prices while imports continue to be subdued amid the weak economic recovery. With these dynamics set to remain in place, at least in the near term, SA’s trade account will remain supported and these dynamics will remain favourable for the ZAR.

Mozambique: Mozambique made another big stride in becoming a regional electricity powerhouse yesterday. Mozambique began construction of a new gas-to-power plant and transmission line worth $1bn in the southern province of Inhambane on Monday. According to World Bank and the US embassy, the massive infrastructure project is being funded by the World Bank, the United States, Norway, African Development Bank (AfDB), Islamic Bank and The OPEC Fund for International Development. Speaking at the launch of construction yesterday, President Filipe Nyusi said, "Today we mark a milestone in the framework of this endeavor to illuminate Mozambique. Our governance aspires that more than 10 million Mozambicans will have access to electricity for the first time in their homes by 2024."

The Bank of Ghana’s Monetary Policy Committee, in a surprise move, voted in favour of slashing interest rates on Monday. Specifically, the central bank lowered its benchmark interest rate by 100bps to 13.50%, its lowest level in almost a decade. The move goes against the hawkish shift in global monetary policy as international inflation expectations continue to mount amid soaring commodity and food prices. 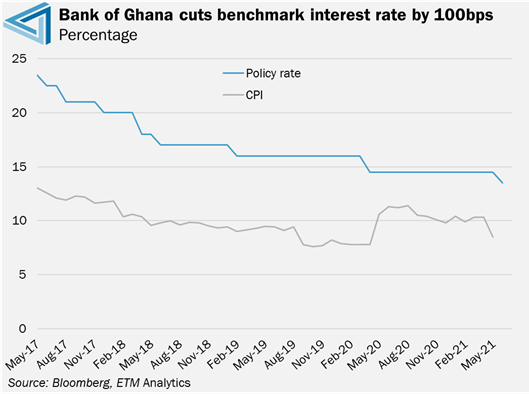 The Bank of Ghana’s decision to lower its benchmark interest rate was underpinned by the recent pullback in headline inflation and renewed growth concerns. The central bank said in its policy statement that it expects headline inflation to remain within its inflation target band in the near term. Economic activity is expected to rebound in the medium term. However, risks relating to the pandemic remain elevated due to new variants and vaccination challenges, which has dampened recovery hopes.

Notwithstanding the bold rate cut, the USD-GHS continued to trade in a relatively tight range on Monday. Although Ghana’s real interest rate has fallen following the rate cut, it remains buoyed in positive territory. Ghana’s positive real interest rate continues to offer support for the GHS. Soaring commodity prices, which are bolstering Ghana’s terms of trade, will also support the GHS.

Kenya was back in the spotlight on Monday after lawmakers released a report stating that the East African nation is heading towards default unless the government revamps its debt. The parliamentary budget office said in a report released yesterday that Kenya’s debt servicing costs are projected to increase to a record KES 1.17trn in the financial year starting on July 1. Lawmakers noted that this is more than the KES 660bn that the government has set aside for spending on development projects.

Kenyan lawmakers said in the report that the marked increase in debt repayments “indicates a growing level of fiscal inflexibility and therefore increased exposure to fiscal risks or debt default, in (the) absence of debt restructuring,” adding “that borrowing for development expenditure financing might no longer be a viable fiscal principle.” Lawmakers are not the only ones sounding the alarms over the risk of fiscal distress in Kenya. International lenders, including the International Monetary Fund, have said that Kenya may be at risk of debt distress.

The comments from the IMF came after the government said in its budget that it plans to borrow as much as $7.3bn in the international debt market over the next 2 years. Bloomberg meanwhile reported that by the 2024 financial year, Kenya’s debt servicing costs are expected to have more than doubled from 2020, with spending on development infrastructure remaining little changed. Borrowing is restricted to funding for development projects, according to Kenya’s public finance management rules. As is the case for many highly indebted African nations, the need for fiscal reform and a return to a path of fiscal consolidation in Kenya is urgent. The government should be looking at rolling reforms such as substituting borrowing with alternative financing such as public-private partnerships, particularly for large infrastructure expenditure, according to lawmakers.

The fiscal warning from lawmakers on Monday triggered a fresh sell-off off in longer-dated Kenya bonds as investors demanded a greater fiscal premium for holding Kenyan sovereign debt. Moreover, it is worth pointing out that a significant degree of steepness remains baked into the Kenyan sovereign bond yield curve, reflecting the fiscal degradation that has materialised over the past year. Note that Kenya’s fiscal decline has been accentuated by the COVID-19 pandemic as the government ramped up spending and as the economic slump stifled revenue intake. 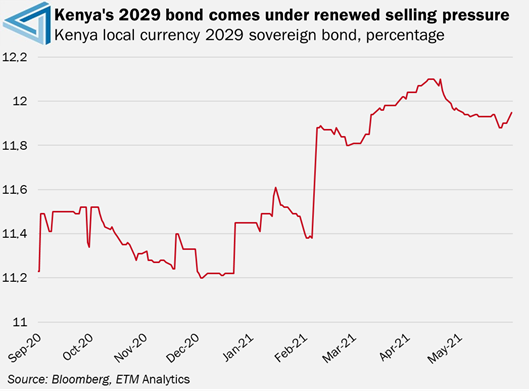 Macroeconomic: Inflation risks in Nigeria remain tilted firmly to the upside, CBN is going to have to hike rates

Surging inflation in Nigeria remains a major concern for investors. While inflation has continued to trend higher, the Central Bank of Nigeria has opted to maintain an accommodative monetary policy stance in a bid to provide support for the flagging economy. The relatively loose monetary conditions in Nigeria against the backdrop of soaring commodity and food prices and a seemingly uncontrollable downward trend in the Nigerian naira suggests that risks to the inflation outlook remain tilted firmly to the upside. 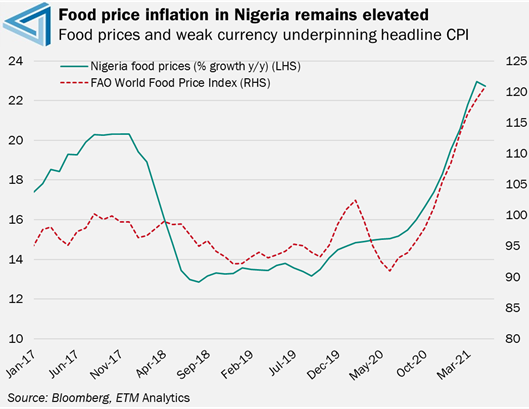 The accompanying chart shows just how severe the acceleration in food prices has been in recent months. While food price inflation slowed at the margin in April, decreasing to 22.72% y/y, it is worth noting that it was still the second strongest food price inflation reading in over a decade. Commenting on Nigeria’s soaring food prices and lack of food security, President of the All Farmers’ Association of Nigeria, Kabir Ibrahim said, “while we want to be self-sufficient in food production, we are bedevilled by the problem of insecurity, and sometimes last year, we had flooding. Our production was a bit low, demand was quite high because our population was increasing and we were not importing.”

With security threats in Nigeria intensifying, the lives and crops of farmers in Nigeria remain at risk, which is expected to lead to sustained food price inflation. This comes amidst heightened global food prices, which are being accentuated domestically by the weakness in the naira. Therefore, we see the risks to the outlook for food and overall inflation in Nigeria as being skewed firmly to the upside. Therefore, while the central bank will try to maintain some degree of accommodation to support the economic recovery, we are of the opinion that it is going to be forced to hike rates in the not so distant future to curb the soaring inflation.